Show, don’t tell. That’s become a professional mantra for me with respect to the kind of journalism we produce here at Canadian Geographic. We don’t editorialize; our readers are smart and sophisticated, capable of drawing their own conclusions from our presentation of the facts.

Coincidentally, one of our core content pillars — cartography — is particularly adept at delivering on this storytelling approach. Maps let us make our own decisions about what we’re seeing.

Each year now since 2015, I’ve penned a year-end blog sharing some of the most interesting maps Canadian Geographic created in the previous 12 months. I’m once again here to point out some of our cartographic highs (all courtesy of our amazing cartographer Chris Brackley) that, if you didn’t see them originally, you should definitely check out. And if you did see them already, they’re so good, they’re definitely worth a second look. Enjoy exploring them. 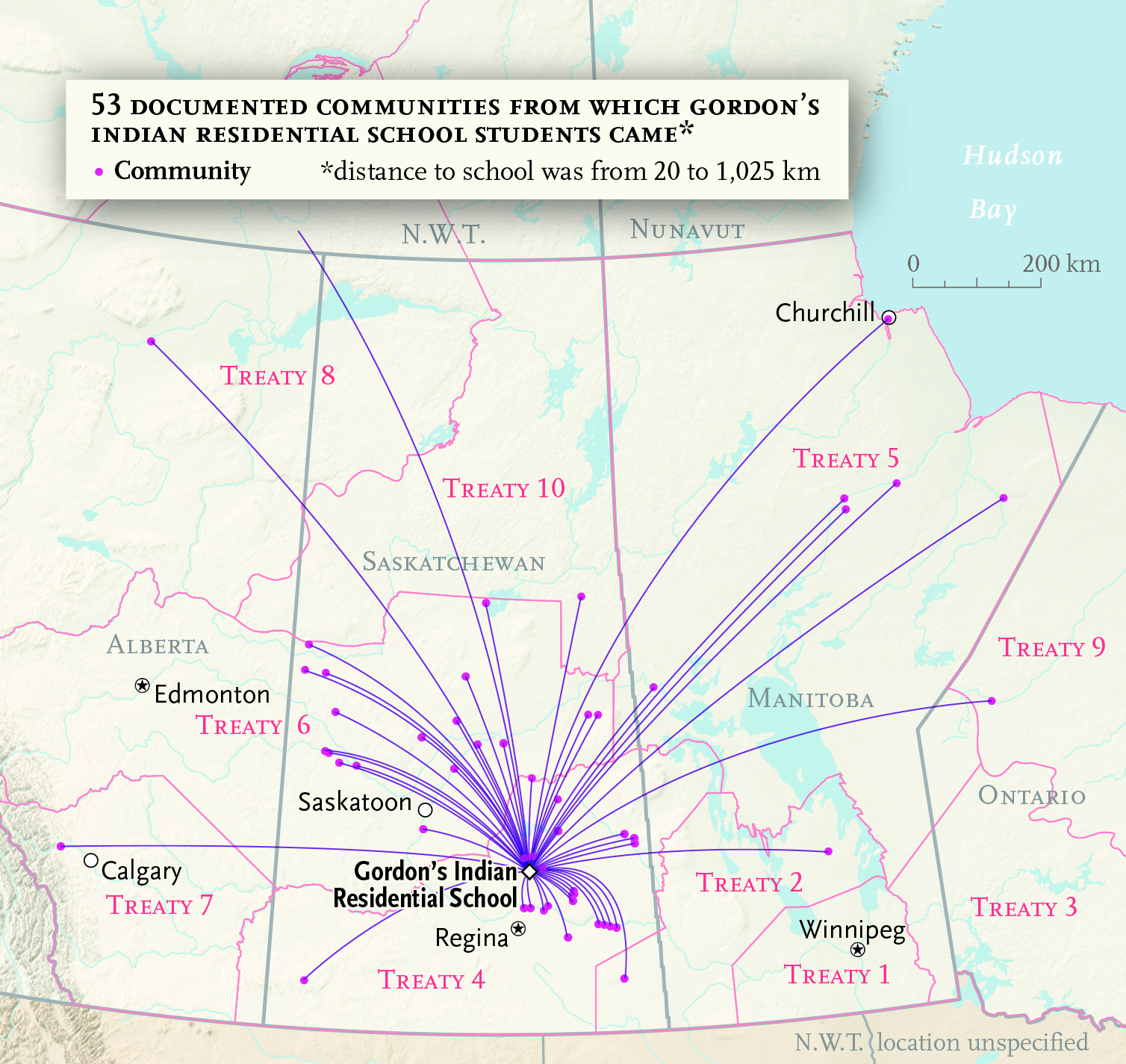 This map accompanied a piece originally published in our January/February 2021 issue on the 25th anniversary of the closing of Gordon’s Indian Residential School. The facility, located about 10 kilometres south of Punnichy, Sask., is considered to be the last residential school to have closed. Why’s the map noteworthy? We believe it charts for the first time the communities that students were taken from to attend the school. I’ll let the distances speak for themselves.

Snow removal in the city of Montreal

“Snow removal in the city of Montreal,” published in the January/February 2021 issue of Canadian Geographic.
(Map: Chris Brackley/Can Geo)

There’s lots to explore in this map that details where the city of Montreal dumps all its snow each year (and a neat little graphic to give you a sense of just how much of it falls on the city annually). It first ran with a story in our January/February 2021 issue detailing just how Montreal wages its $166-million battle against snow every year (the highest snow-removal budget of any city on the planet).

Everest: a climbing history (with a Canadian focus) 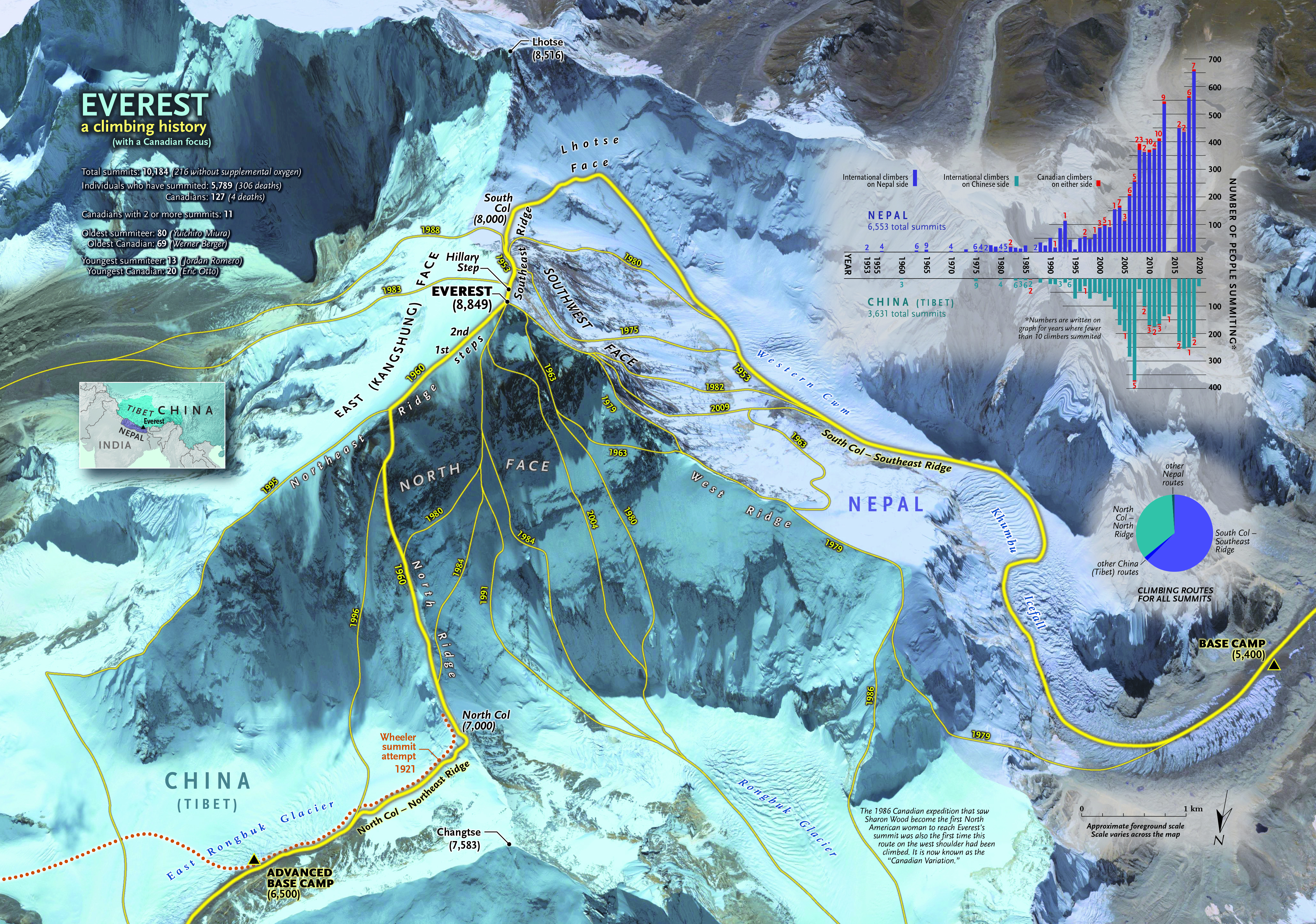 “Everest: a climbing history (with a Canadian focus),” published in the March/April 2021 issue of Canadian Geographic.
(Map: Chris Brackley/Can Geo)

The highest mountain on Earth got significant play in this map that was originally published as a double-page spread in our March/April 2021 issue. (It accompanied a feature exploring one Canadian climber’s personal connections to Everest.) And we’re very fortunate to work with a contact at Maxar Technologies, which operates Earth-imaging satellites, who provided us detailed satellite images of the peak to produce a view of Mount Everest you’ve probably never seen before. And, wow, does it provide for lots of armchair exploration! 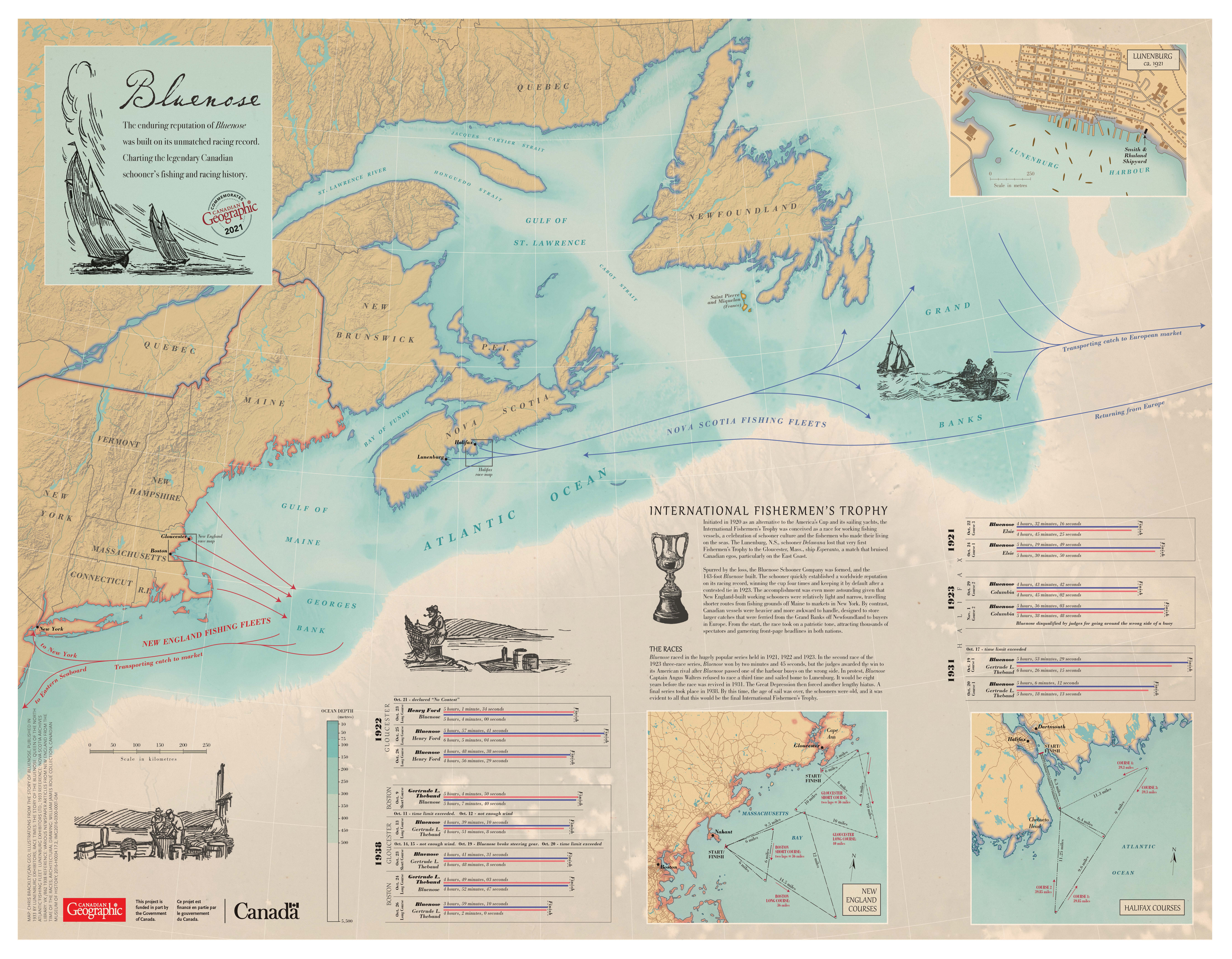 A poster-sized version of this map was included with our March/April 2021 issue, along with the feature story celebrating the 100th anniversary of the legendary fishing/racing schooner. What’s neat about this map is that in addition to showing its general sailing grounds, it also included inset maps from its race series. (See more on those detailed maps here.) 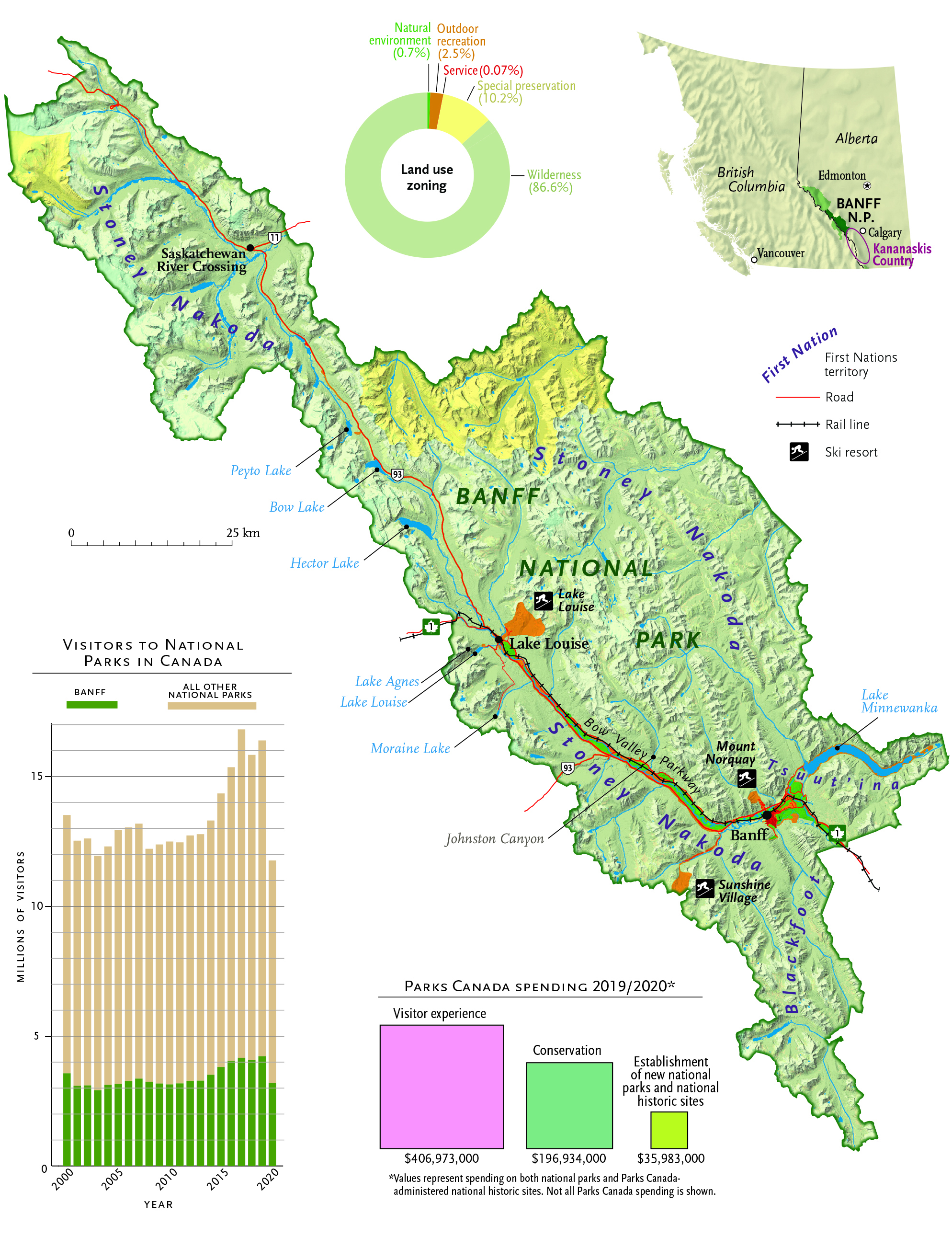 Talk about show, don’t tell. This map detailing land use and related topics in Alberta’s Banff National Park might seem, at a glance, to tell a polar opposite story from the feature it accompanied in our July/August issue. The feature explores how drastically increasing visitation at the park — and in similar protected areas throughout the country — is threatening conservation goals and the visitor experience in such areas. The map, on the other hand, shows but a few small areas (largely humanmade infrastructure such as townsites, roads and railways) impacted directly by people. Of course, there’s more than meets the eye here, which inspires further thought. 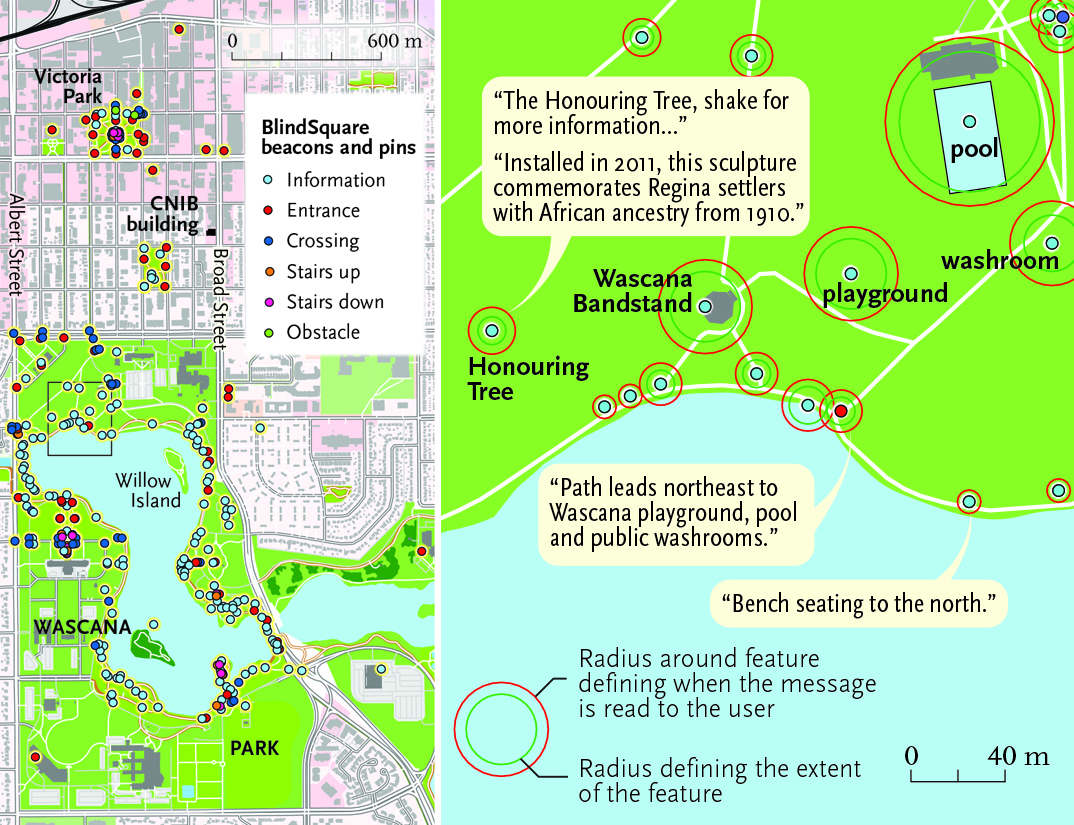 These two maps were published in our September/October issue along with a story about an app called Blindsquare that’s helping the visually impaired explore Regina’s Wascana Park. The maps kind of speak for themselves (like the app!), giving readers a great sense of just what interacting with Blindsquare is like for users.