Truth be told, quite possibly our most popular map of 2020 isn’t included below. Why? It appeared on this website only, partly owing to its timeliness (at the time) — it was a map of COVID-19 cases in Canada per capita in April. (The map, and accompanying blog post by our cartographer Chris Brackley, is the most-read piece on our site this year!) Still, what’s gathered here are other highlight examples of cartographic creations we published in print in 2020. (See our top maps from 2019, 2018, 2017, 2016 and 2015, too!) Each is equally intriguing in its own right and they’re all definitely worth exploring.

DEW Line support for the Arrow 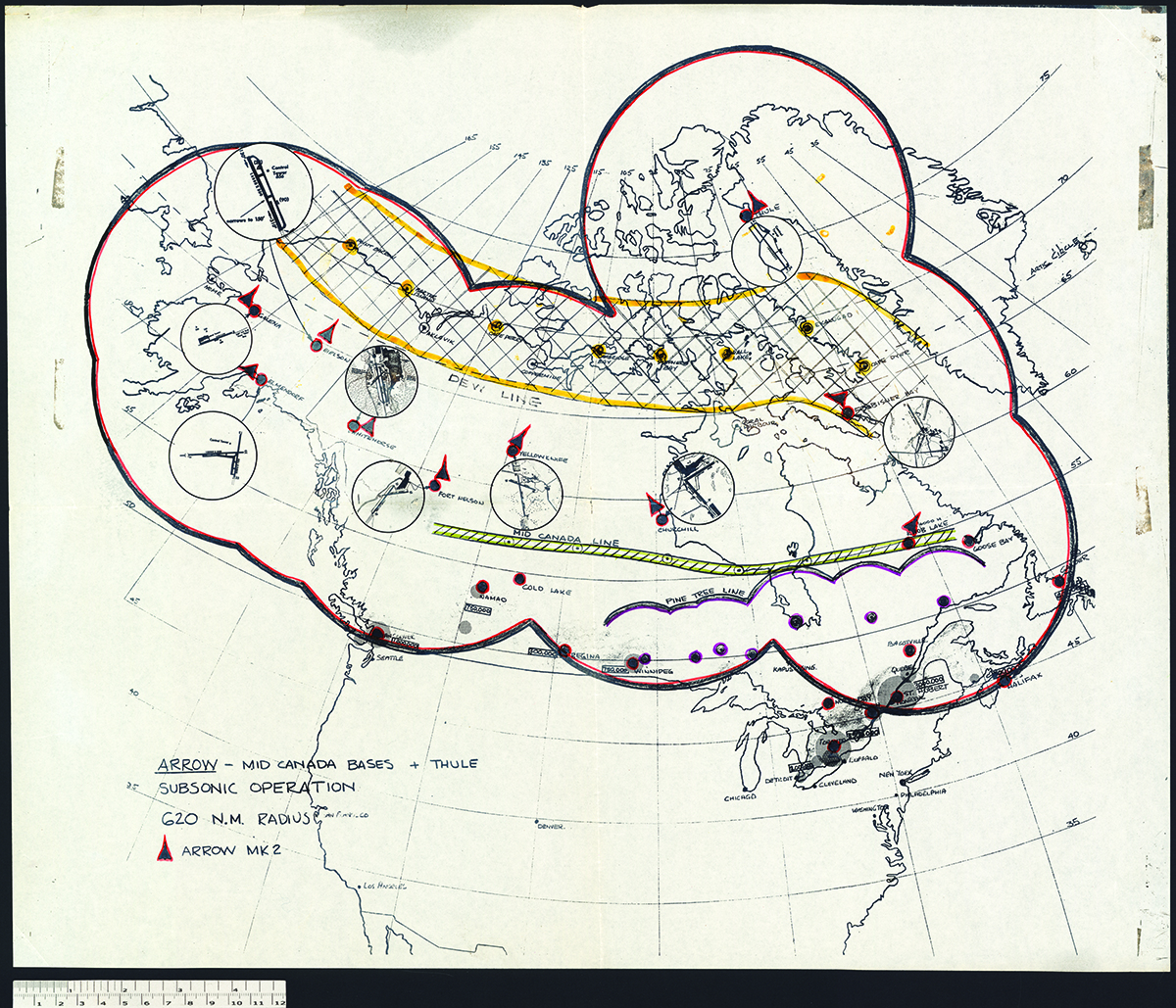 “DEW Line support for the Arrow,” published in the January/February 2020 issue of Canadian Geographic. (Map: Library and Archives Canada, MIKAN 4988516)

This map was published in our Discovery History department and showcases some intriguing aspects of Canada’s past, namely how the famous Avro Arrow fighter jet “might have been deployed to intercept incursions by hostile aircraft in Canadian airspace,” wrote Stephen Smith in the accompanying text. The late-1950s Department of National Defence map also shows three sets of radar installations — the Pine Tree, Mid Canada and Distant Early Warning (DEW) lines — intended to help give air-defence commanders a heads up of any incoming attack from over the Arctic. 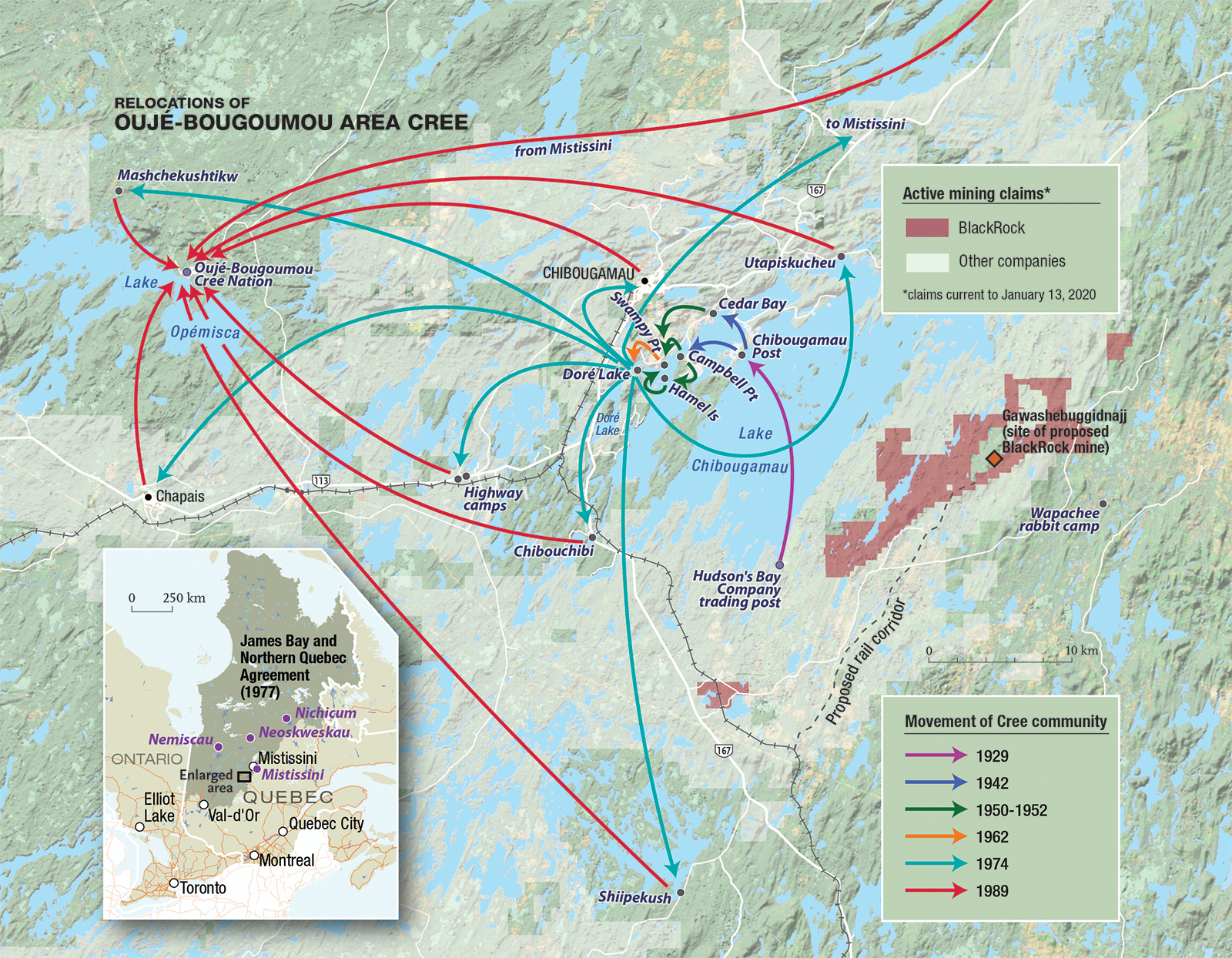 As part of a much larger project exploring community relocations in Canada (learn more here), Canadian Geographic asked contributing editor Julian Brave NoiseCat to write a feature story on the relocations of the Oujé Bougoumou Cree in boreal Quebec. This map accompanied his story and captures in a snapshot their moves. Of particular note: check out how little space in the area does NOT have an active mining claim.

The shape of ice 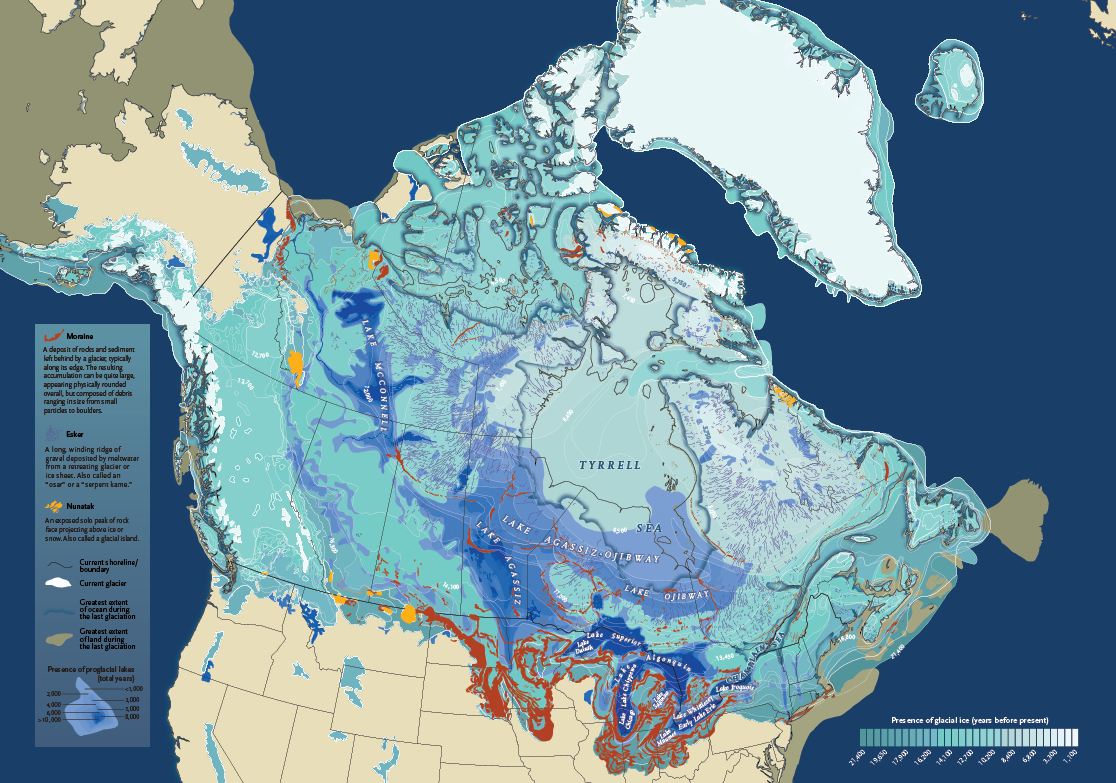 “The shape of ice,” published in the May/june 2020 issue of Canadian Geographic. (Map: Chris Brackley)

This chart of historic ice coverage in North America is plain and simply stunning. It also maps numerous geological features that are hard to find on any map – current or historic — such as gigantic proglacial lakes Agassiz, Ojibway and McConnell. It’s a fascinating look at our ice shaped our continent’s present-day landscape. 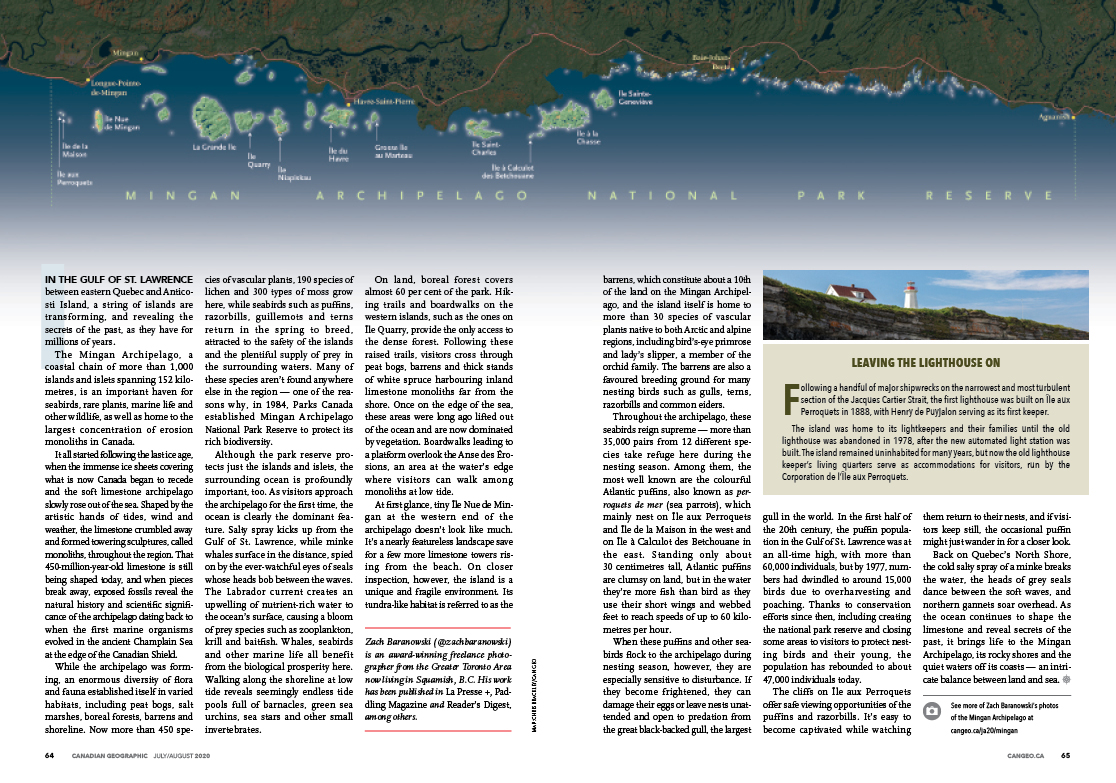 I’ve included this map in the context in which it was published in print because that’s part of what makes it noteworthy. As you can see, it ran across the top of a double-page spread, showcasing the natural horizontal aspect of the park and its many islands. To be able to illustrate the park in this way is a testament to our commitment to, as much as possible, letting geography speak for itself when we chart it in print. 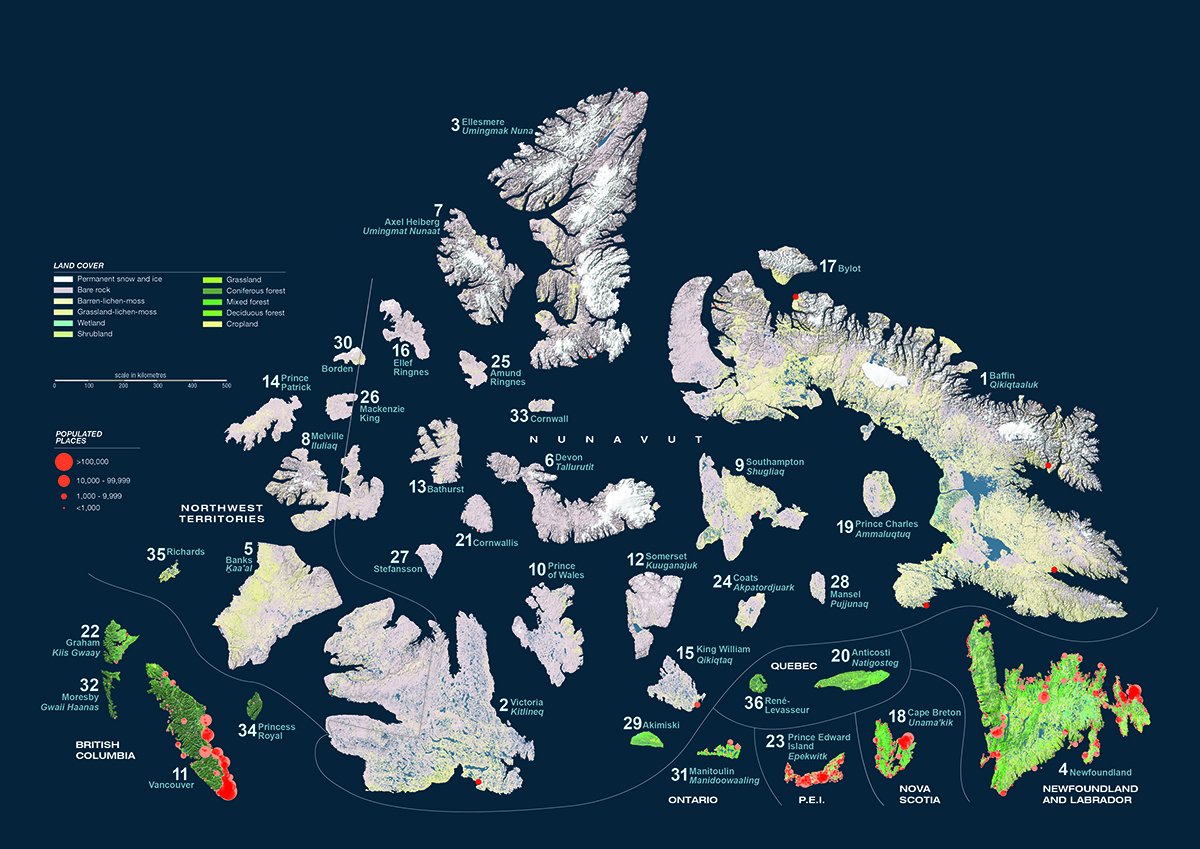 At a glance, this map seems strikingly simple. A comparative presentation of Canada’s 25 largest islands. But creating it was a little more complicated. For one, cartographer Chris Brackley had to double-check relative island sizes from existing lists and then he painstakingly oriented them in geographically relative areas (see more about this process here). The result, we hope, was akin to a piece of art. Indeed, we felt so strongly about the artist nature of the final product, that we expanded the list to 75 islands and created a wall map that is for sale in our online shop. 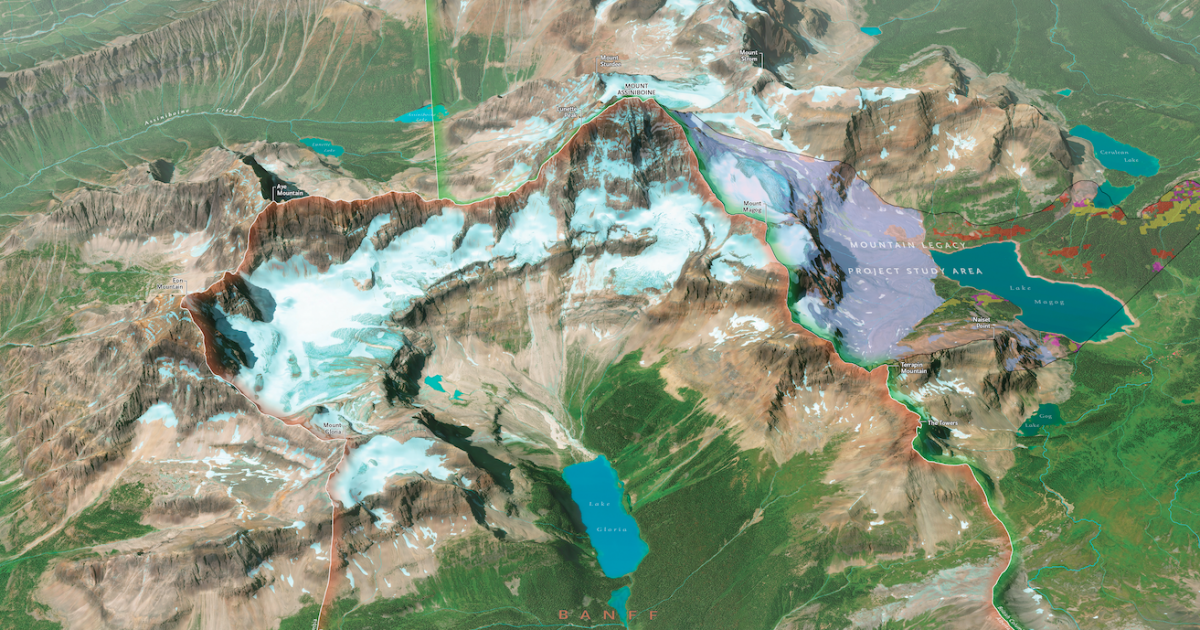 Here’s betting you’ve never seen the photogenic pyramid peak of Mount Assiniboine look like this! And for good reason. Cartographer Chris Brackley worked with satellite company Maxar – they provide all base maps for Google, Apple, etc. — to have Assiniboine mapped via satellite just to create this map of the iconic Canadian peak. This bird’s eye view perspective also allows for all sorts of interesting storytelling opportunities that just wouldn’t be possible with alternative views. Check out an interactive verison of this map here.