The best maps we published in 2016

Exploring a year of cartographic beauty at Canadian Geographic
By Aaron Kylie
December 19, 2016

At Canadian Geographic, we take maps seriously. We may be the only media organization in the nation that employs a full-time cartographer. Chris Brackley has been making maps for over two decades, and along with some help from our editors and designers, routinely transforms simple charts into informative art. Of the many maps he created (or helped create) over the past year, the selections below are particularly stunning.

In the fall of 2015, meteorologists were predicting a “super El Niño” would impact temperatures across Canada through the winter of 2016. While a regular El Niño typical causes slightly above normal temperatures, the super version can see temperature skyrocket. Brackley created this map based on Environment Canada’s temperature anomaly map for Dec.-Feb 2015-16, which was assembled from 20 regional forecasts. Not only does the map look great, but it also turned out to be remarkably accurate. 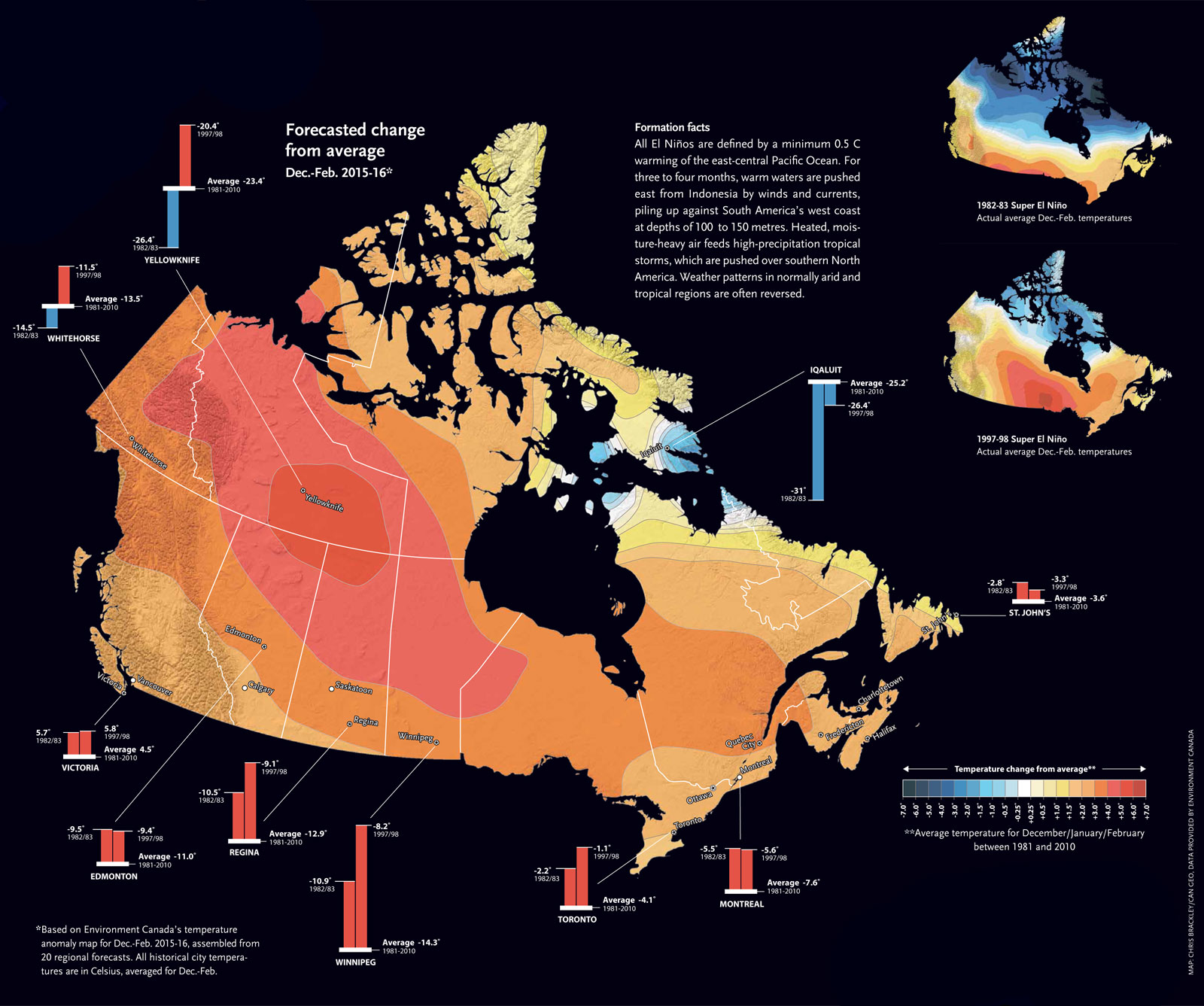 Most of us likely understand the concept of a watershed. Many of us have probably even seen them mapped before. But you’ve probably not seen a watershed charted like this. Created as part of a multi-year initiative called OPEN Water, which was designed to introduce the concept of watersheds as geographical boundaries to K-12 students and co-spearheaded by Canadian Geographic Education, this map of the Lake Winnipeg watershed simply and effectively shows the region the watershed impacts, and the various habitats and communities through which it runs. 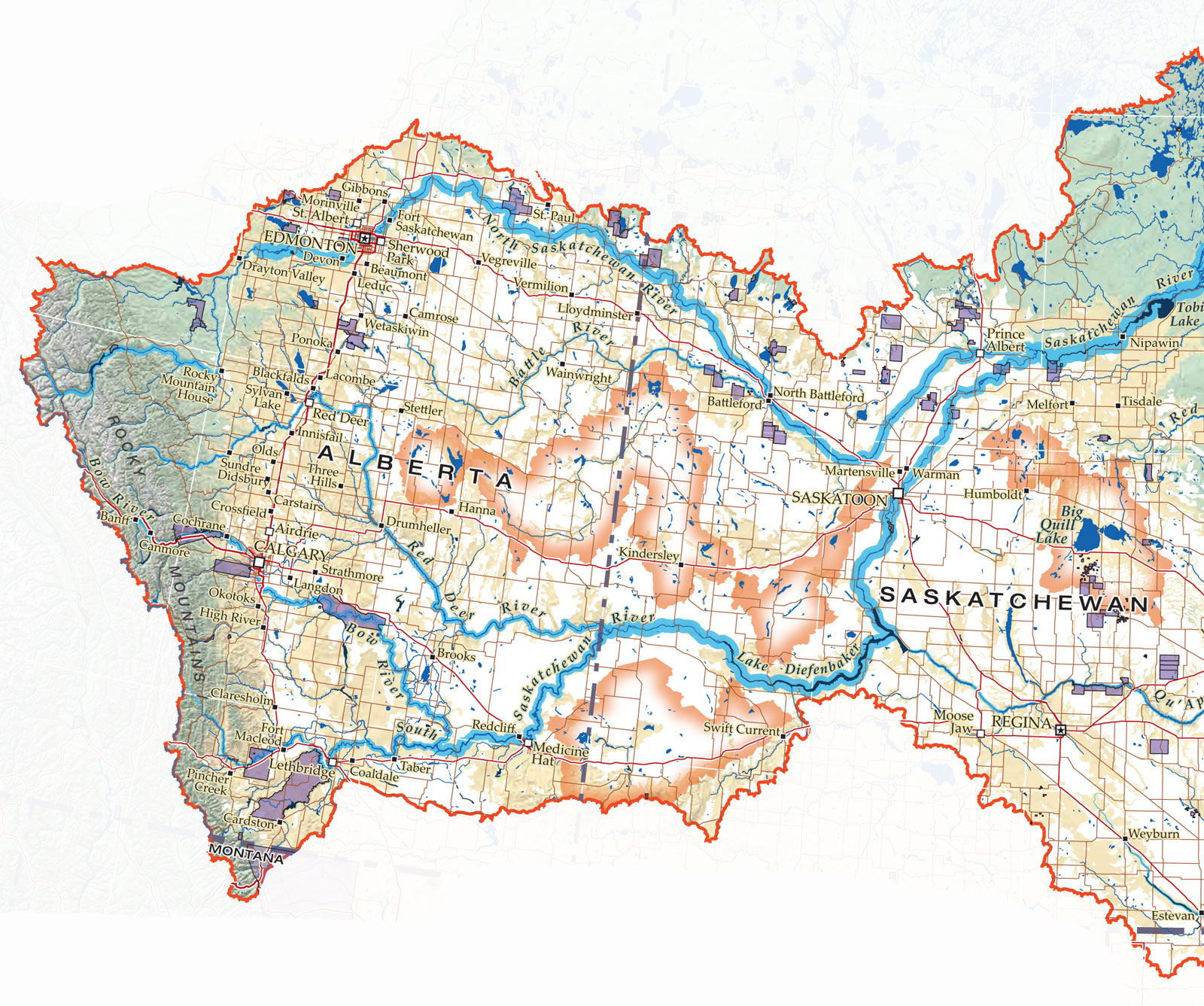 Created to accompany a feature story on hydro power in Canada, this map illustrates the installed capacity (in megawatts) of hydroelectric generating stations in Canada, as well as major transmission lines. The map not only looks sharp, but the relative-size circles representing different ranges of capacity make reading the map super simple. There’s little question where Canadians are using hydro power the most. (Also check out this online interactive map of Canada’s hydroelectric infrastructure.) 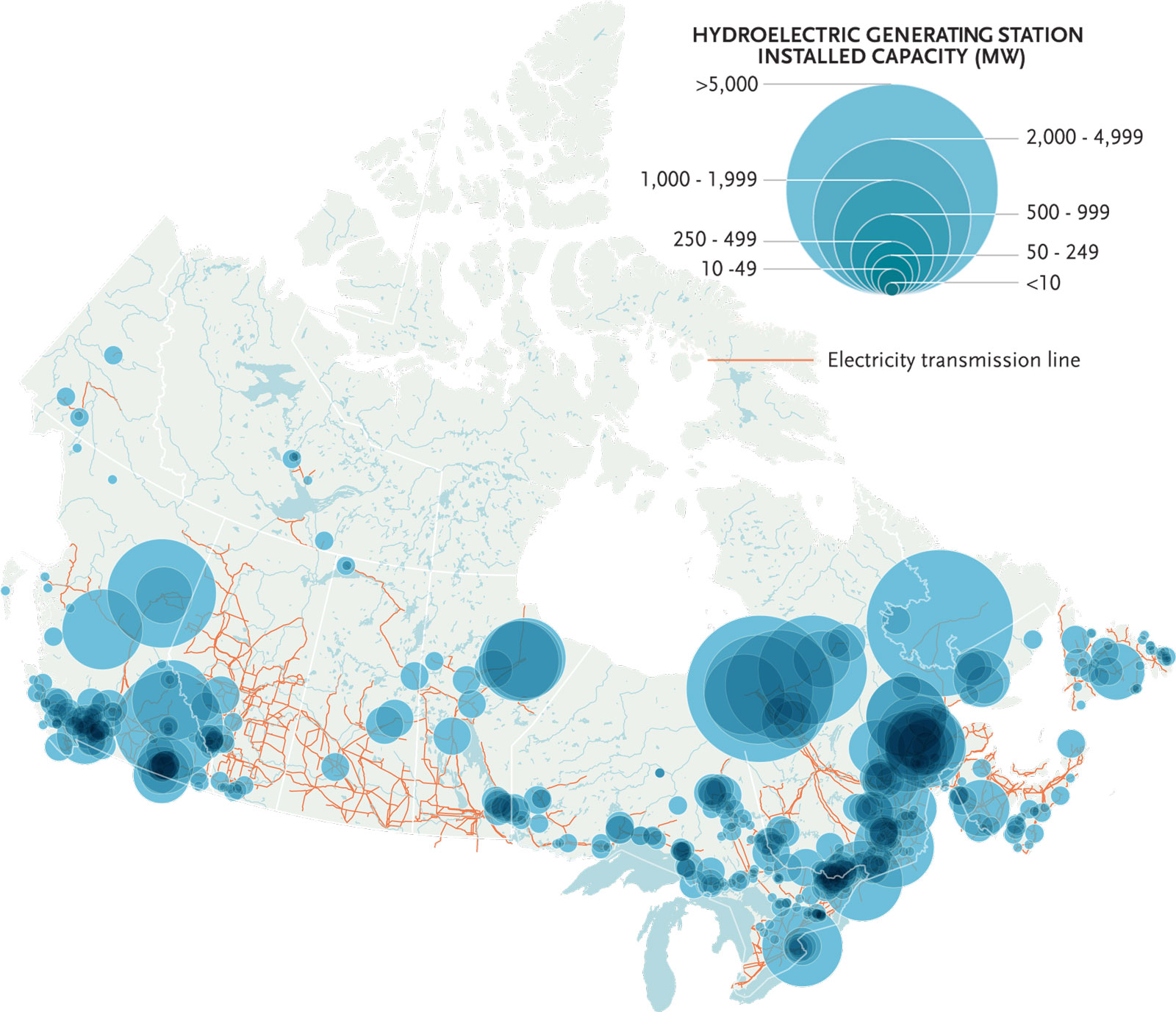 This map was a first for Brackley and Canadian Geographic. In an attempt to illustrate in greater detail the scope of the delivery zone of a bicycle courier company in Montreal (the focus of the accompanying feature story), Brackley used a Google Earth image as the base map. The resulting graphic shows not only the impressive size of the delivery zone, but gives a perspective of the elevation change and urban environment the cyclists encounter, too. 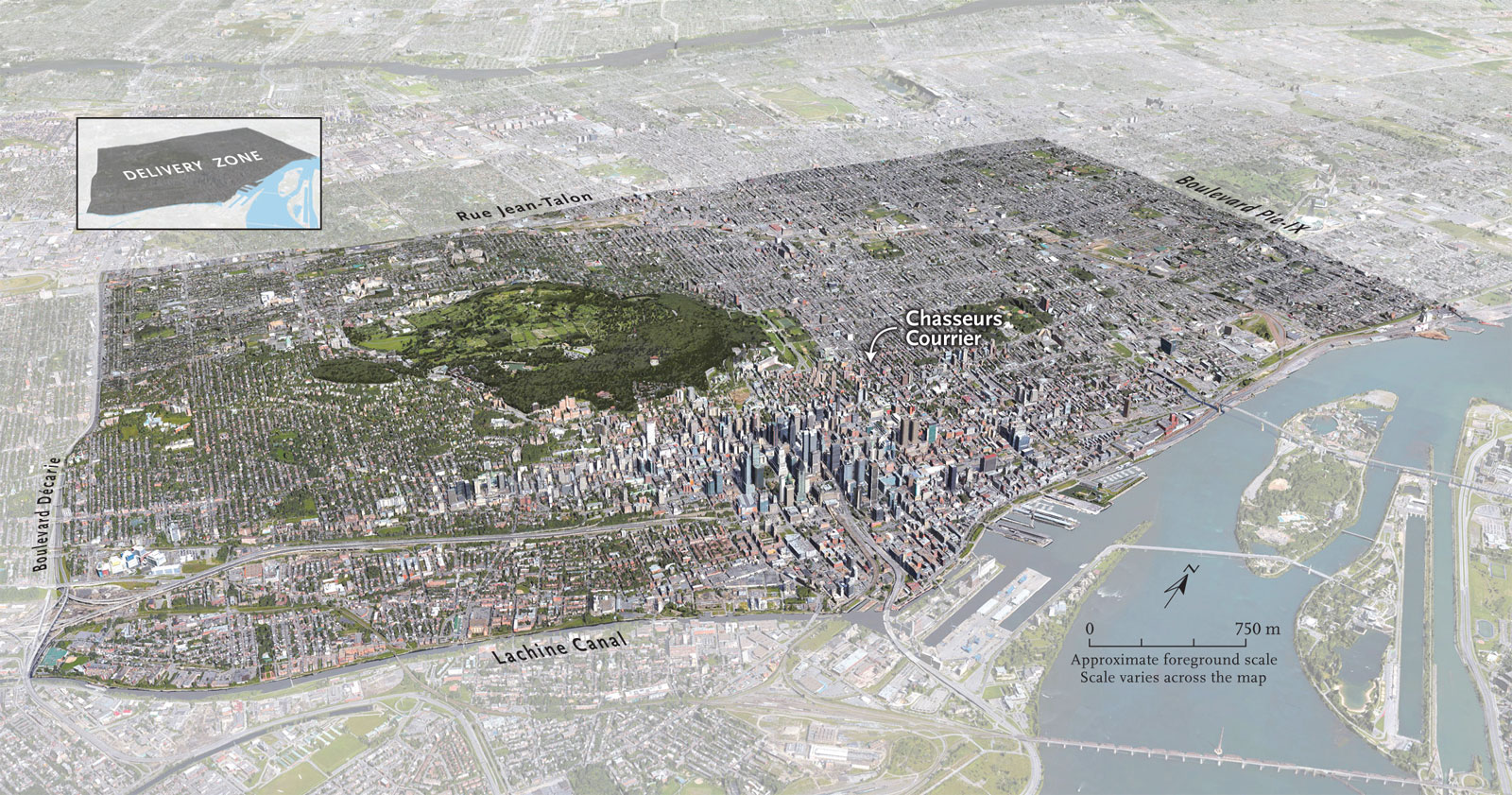 This map was not created by Brackley, however he helped advise on its interpretation and it’s linked to a Giant Floor Map of the Western Front that Brackley created for Canadian Geographic Education. This one, though, is a barrage map from the First World War, and was undoubtedly critical to what many historians consider Canada’s greatest war achievement, the Battle of Vimy Ridge. Essentially, the map was used by soldiers to time their advance on the ridge in conjunction with cover artillery fire. Move too quickly and risk friendly fire. Move too slowly and the Germans could marshal a defense. It ultimately helped lead to the victory. 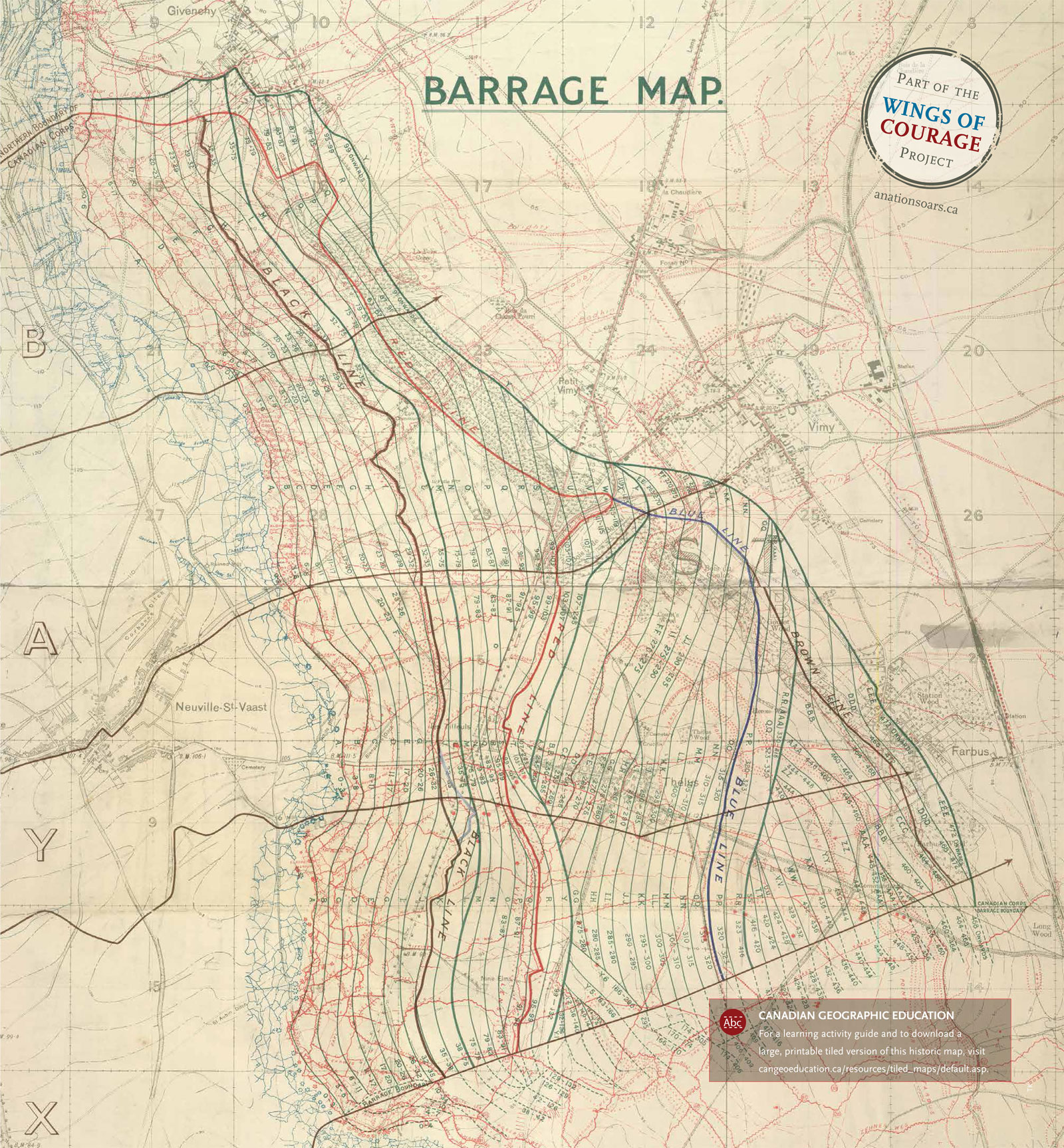 'Clockwork cartography', published in the October 2016 issue of Canadian Geographic.

The effect of climate change on animal movement

Brackley didn’t wholly create this map either, but he was instrumental in its success in print. The map was originally an online map where the lines representing mammals, birds and amphibians were moving, predominately south to north. The data underpinning it was compiled by Brad McRae, a senior landscape ecologist with the Nature Conservancy, his colleagues and other researchers from the University of Washington, to indentify the possible future habitats for nearly 3,000 different species based on a number of climate change models. Brackley’s role? He solved the challenge of making the moving map stationary while maintaining its key overall message. 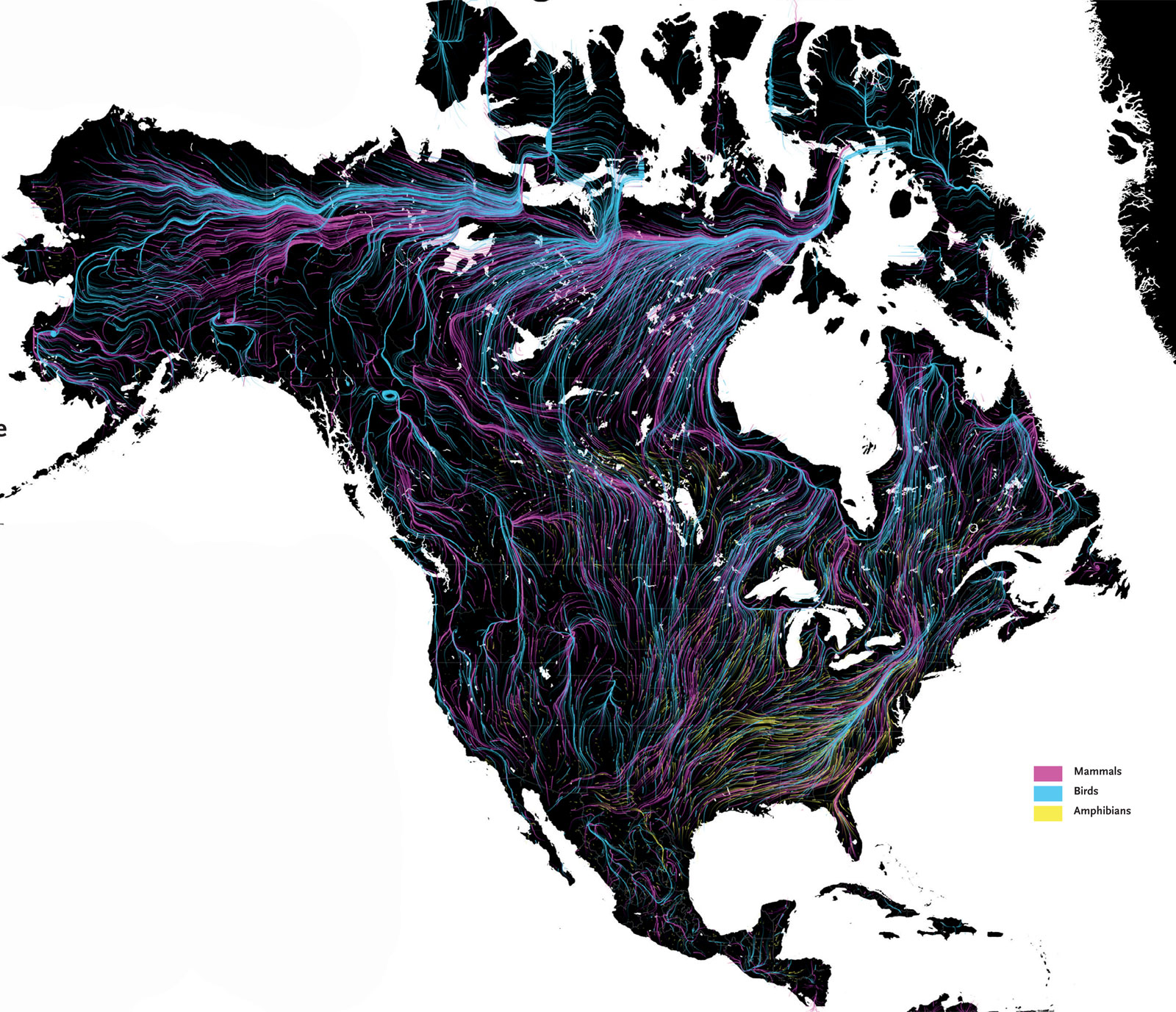 'On the move', published in the December 2016 issue of Canadian Geographic.