Ambitious multi-platform, Indigenous-led project will be a tool for education and reconciliation
By Nick Walker
June 9, 2017

“I’m very honoured to meet you on the territory of the Algonquin people, on the land of my ancestors,” said Elder Annie Smith St-Georges to those gathered at 50 Sussex Dr. on June 8. “My grandmother lived here, camped on this side of the river, as did her grandmother and great-great grandmother before her.”

With the confluence of the Rideau and Ottawa rivers visible through the panoramic windows behind her, St-Georges opened the launch of the Indigenous Peoples Atlas of Canada project at The Royal Canadian Geographical Society headquarters with a blessing. “We’re starting to walk together in reconciliation,” she said. “That’s about joining efforts, and this is one step forward in healing, in acknowledging Aboriginal people.”

The RCGS has partnered with Canada’s major Indigenous organizations on the creation of this groundbreaking work, which will draw on the knowledge and expertise of the Assembly of First Nations, Inuit Tapiriit Kanatami (which represents the Inuit of all four major regions and works to preserve Inuit culture and languages), the Métis National Council, the National Centre for Truth and Reconciliation and Indspire (an Indigenous-led organization that invests in the education of First Nations, Inuit and Métis people).

“Our government has said time and time again that there is no relationship more important than with the Indigenous Peoples of this land, but this is more than just words,” said Mélanie Joly, Minister of Canadian Heritage. “We must take concrete actions toward this relationship — one that is based on recognition of rights, respect, cooperation and partnership. And we must communicate and work together so that everyone can gain a deeper understanding of the rich cultural traditions and diverse languages of the Indigenous Peoples.”

This, explained Joly, is why the federal government is contributing $2.1 million from its Canada 150 fund to the creation of the atlas and companion educational resources. English and French versions of the atlas will be available across Canada in late 2017.

“We are now emotionally, psychologically, culturally mature enough to know that there have been wrongs in our history,” said Joly, “and that we can talk about and work together to make sure that these wrongs do not happen again — that the next 150 years are much more positive. I hope that this will be one of the important legacies of Canada 150.”

With the guidance of and contributions from Indigenous partners, writers and editors, the atlas will feature a series of maps dating from pre-contact to present day, exploring themes such as Indigenous languages, demographics, economics and culture. No less important will be the sections exploring the history of treaties and residential schools in Canada, as well as those celebrating the contributions of Indigenous Peoples and the vital role of oral traditions and land-based knowledge.

For a very long time, Indigenous Peoples have not been invited to share their knowledge, to tell their stories, said Ry Moran, director of the National Centre for Truth and Reconciliation. “This will be a powerful teaching tool for many, many years — here and internationally. We can show the world that now, we are having these conversations here.”

“The atlas will tell the story of Canada’s Indigenous Peoples in a way that has never been seen before,” said John Geiger, RCGS CEO. “We recognize that these stories go back many thousands of years, not just 150. As the country’s pre-eminent geographical organization, we are very proud that the atlas will give us an opportunity to help Canadians better understand this history.”

The atlas will tell the story of Canada’s Indigenous Peoples in a way that has never been seen before. We recognize that these stories go back many thousands of years, not just 150.

As Natan Obed, president of Inuit Tapiriit Kanatami, put it, Indigenous Peoples are eager to see their own place names, their histories, reflected in this atlas and in other works.

“I always try to talk about the fact that we weren’t nomads; we had homes and specific places where we belonged,” he said. “When I close my eyes and think of our homelands, for me it’s Nain, Labrador, and the surrounding area. For my wife and my children, it’s Iqaluit, where we now live. And someday I will be able to show them an atlas that doesn’t have the Frobisher Bays and the other colonial place names, but that has actually recorded what we have always called these places.”

Both Obed and Marc LeClair of the Métis National Council spoke of this moment — when reconciliation is more and more in the public mind and the government wants to back projects such as the Indigenous Peoples Atlas of Canada — as a hopeful time for reclaiming and repatriating culture and history. “I look around this room today and I see young men and women,” said LeClair, “but if we were to go back to 1867 we would be seeing only old white men. I challenge you all as Canadians to think of this as the time for repatriation of our country, as a re-confederation and a chance to do what maybe our parents and their parents before couldn’t do right. I think we are well placed now to do just that.”

From the atlas proper to the Giant Floor Maps, website, teacher guides and other resources that will be part and parcel of the project, this will be a source of pride for Indigenous communities, for their children, for their contributions to Canada today and the future of Canada, said Roberta Jamieson, president and CEO of Indspire.

“We are born from this land and waters, and we are the product of its bountiful gifts,” she said. “The names of the regions, the rivers, the lakes and the mountains are our names. The atlas will, I am certain, raise consciousness that our very identity and Canada’s identity are synonymous. We expect to develop a very significant role for how this atlas can be used in Indigenous communities and throughout the entire country. You have no idea how positive it feels to finally see, to feel, to thrill over the idea of a real atlas of our home and native land.”

The Indigenous Peoples Atlas of Canada announcement at 50 Sussex also marked the debut of Thirteen Moons, northern Alberta artist Alex Janvier’s newest work. This grand circle of 13 large panels, each representing a month in the traditional Indigenous lunar calendar, forms a kind of ceremonial space that onlookers can enter. The exhibition will be open to the public from June 28 to September 30, after which it will move on to another part of Canada. Its purpose, says Janvier, is to carry his story of time and space to Indigenous and non-Indigenous Canadians across the country. 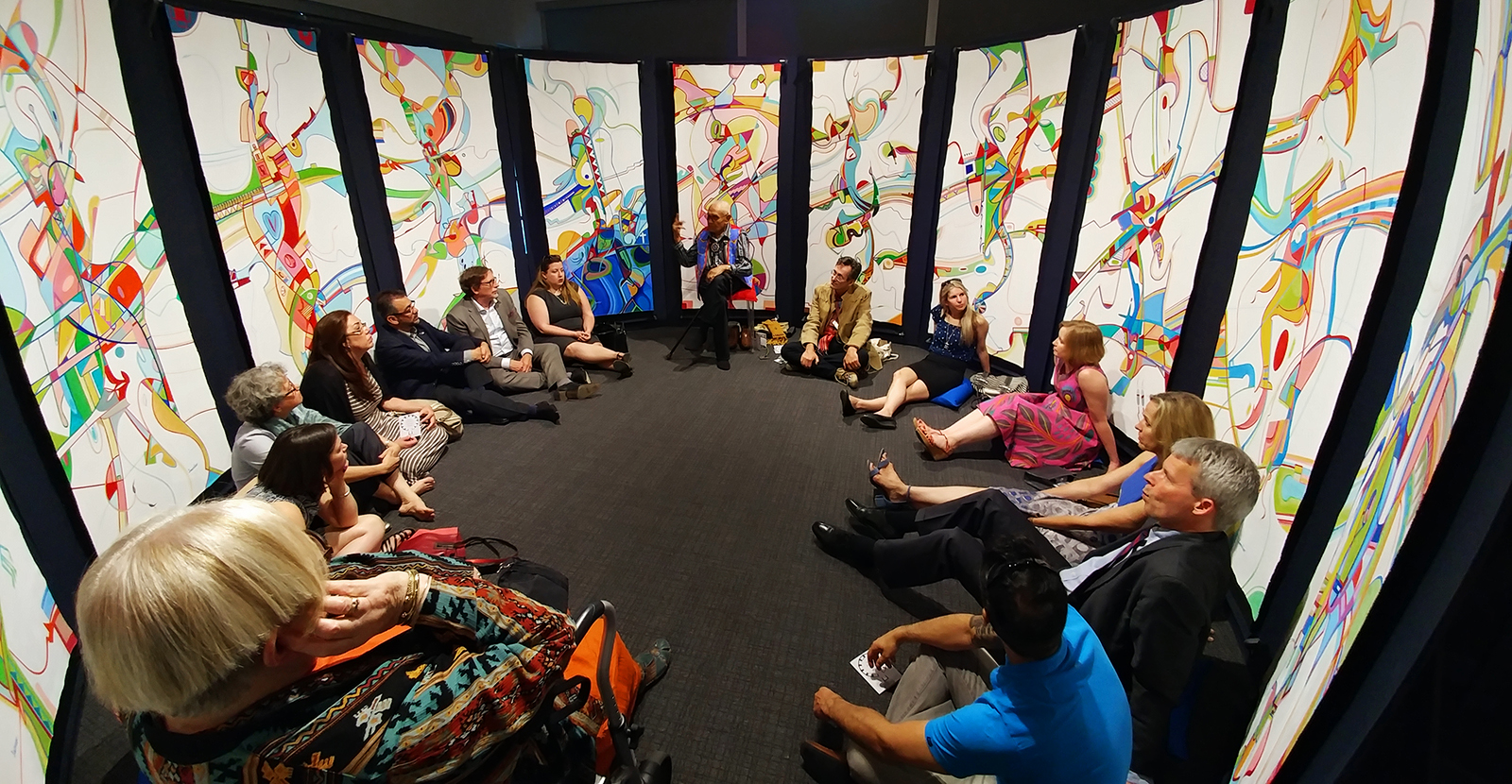 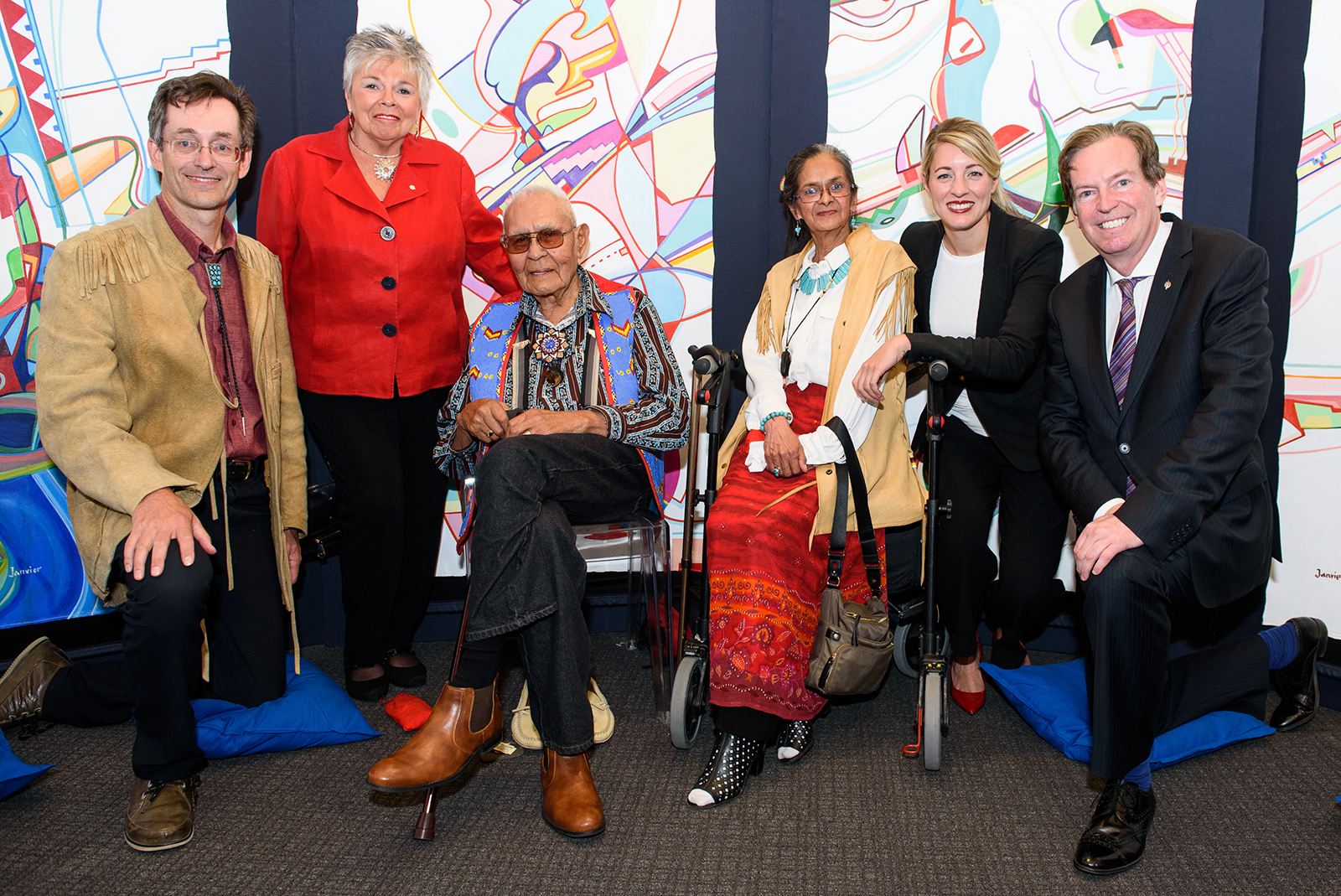