The story behind 'Thirteen Moons,' a new work by Alex Janvier | Canadian Geographic

The story behind 'Thirteen Moons,' a new work by Alex Janvier

Celebrated Indigenous artist Alex Janvier's new work is a circular mural inspired by the traditional lunar calendar. Here's how it came to be.
By Sophie Sharp
June 8, 2017

Look closely at Alex Janvier’s art and you’ll see that it tells stories anchored by a deep connection to the land, a link that reveals itself in his sinuous, riverine lines that morph into the familiar form of an eagle’s head angled toward the heavens or a beaver nestled against the curve of the shoreline.

But his latest work, Thirteen Moons — which makes its debut* today at the new home of The Royal Canadian Geographical Society at 50 Sussex Drive in Ottawa during the launch of the Indigenous Peoples Atlas of Canada project — has its roots in something far more mundane: a hotel meeting room.

In 2014, Janvier was unable to attend a meeting of Indigenous elders who gather once a year at Banff National Park’s Juniper Hotel, which is near the remains of a 4,000-year-old pit house, a type of subterranean dwelling traditionally constructed by the Secwepmec people of the British Columbia Interior. The elders, who represent six different language groups, all with a cultural memory of the Bow Valley thousands of years older than modern-day Banff, meet at the site to participate in ceremonies and share stories about the valley.

Despite missing that meeting, Janvier travelled to Banff several weeks later to meet with the Juniper Hotel’s Peter Poole. As they toured the property, Janvier observed that while the elders like to meet and sit in circle, most of the hotel’s available spaces were rectangular meeting rooms. He envisioned creating a circular space formed from fabric panels. Poole suggested that Janvier might like to paint the panels, and the idea for Thirteen Moons was born. 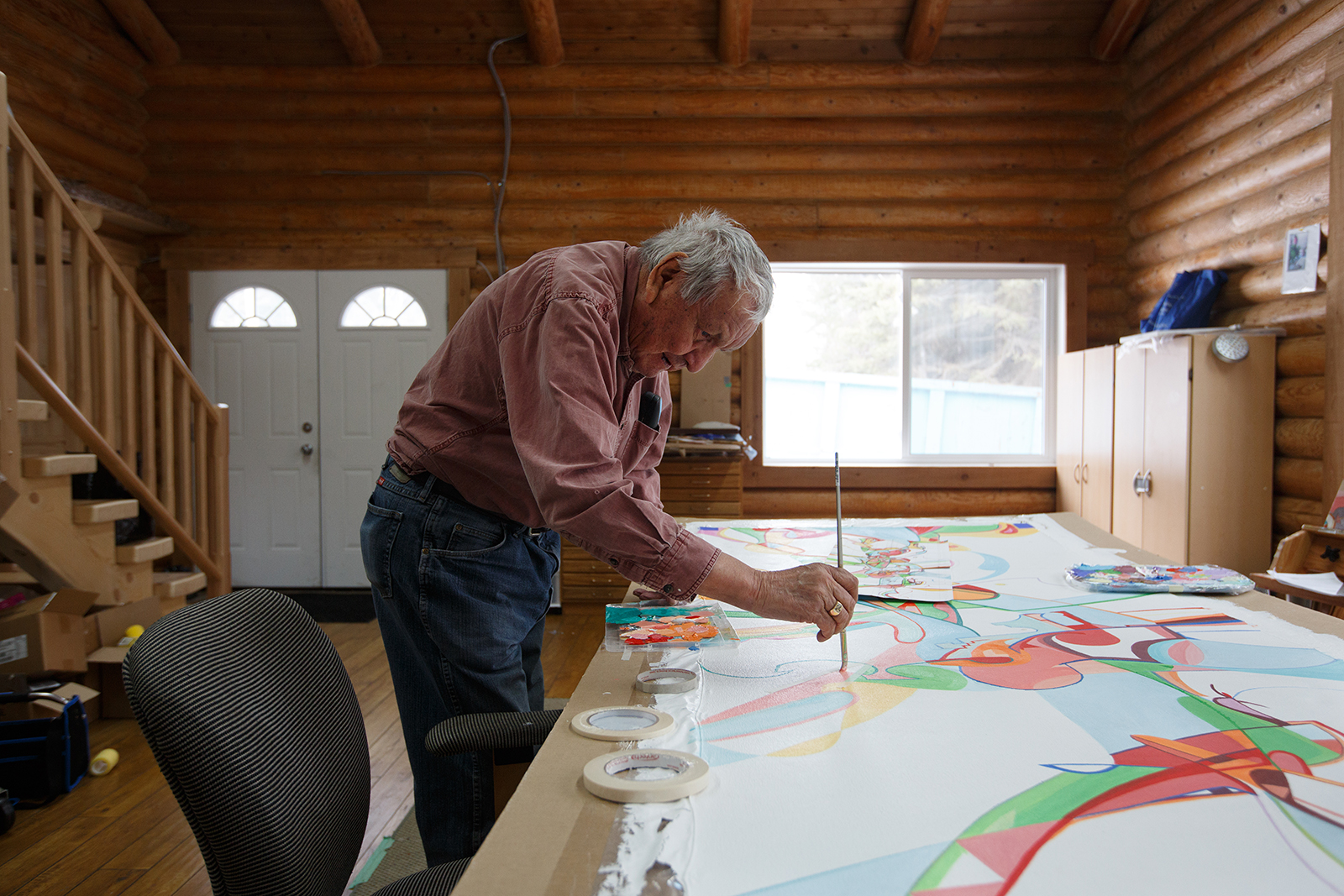 Like some of Janvier’s best-known works, including Iron Foot Place (Tsa Tsa Ke K’e) and Morning Star (Gambeh Then), Thirteen Moons would be a large-scale mural. Unlike those works, however, Thirteen Moons would tell a story about time and space on 13 painted panels — one for each month of the traditional Indigenous lunar calendar — formed into a grand circle, a shape that has been a recurring motif in Janvier’s work.

Mounted on a set of collapsible wooden brackets, the panels form an almost ceremonial space where the viewer is surrounded on all sides by Janvier’s artistic vision. The mural is designed to travel, forging new connections between Indigenous and non-Indigenous Canadians as it carries Janvier’s story about time and space across the country.

The story told in Thirteen Moons is as important as the one that will be told in the Indigenous People’s Atlas of Canada, the project with which it is sharing a spotlight today. After all, art and maps both have the ability to reveal the lay of the land, to point to a path ahead (or examine a path behind), to celebrate our relationship with the Earth and timeless traditions, and to give us hope for a more connected future.

*The Thirteen Moons exhibit will be open to the public from June 28 to September 30. Visit rcgs.org for more information.