A crowd of guests wound their way through more than 3,500 handmade ceramic sculptures adorning the front lawn of Canada’s Centre for Geography and Exploration: roses, feathers, fleur-de-lis and birds, elevated on steel rods in the shape of a compass rose.

The temporary art installation, Compass: Peace in All Directions, was created by artists Hilde Lambrechts, Kirstin Davidson and Kim Lulashnyk, and is part of The Royal Canadian Geographical Society’s 2018 Summer Exhibits Series, now open to the public at 50 Sussex.

Lambrechts, who also created the Canada 150 art installation Populace, designed the 15-metre-wide compass to symbolize the main groups that inhabited the Ottawa area at the time of Confederation — roses for the British, feathers to represent Indigenous Peoples, and fleur-de-lis for the French. The birds represent immigrants to Canada, including Lambrechts herself.

“Compass is the story of Canada in a nutshell, but it is also a moral compass that reminds us of who we are and who we want to be,” she says. “I believe that values of respect, dignity and politeness can guide us to peace and understanding. And when we uphold them strongly, they can make the world a better place.” 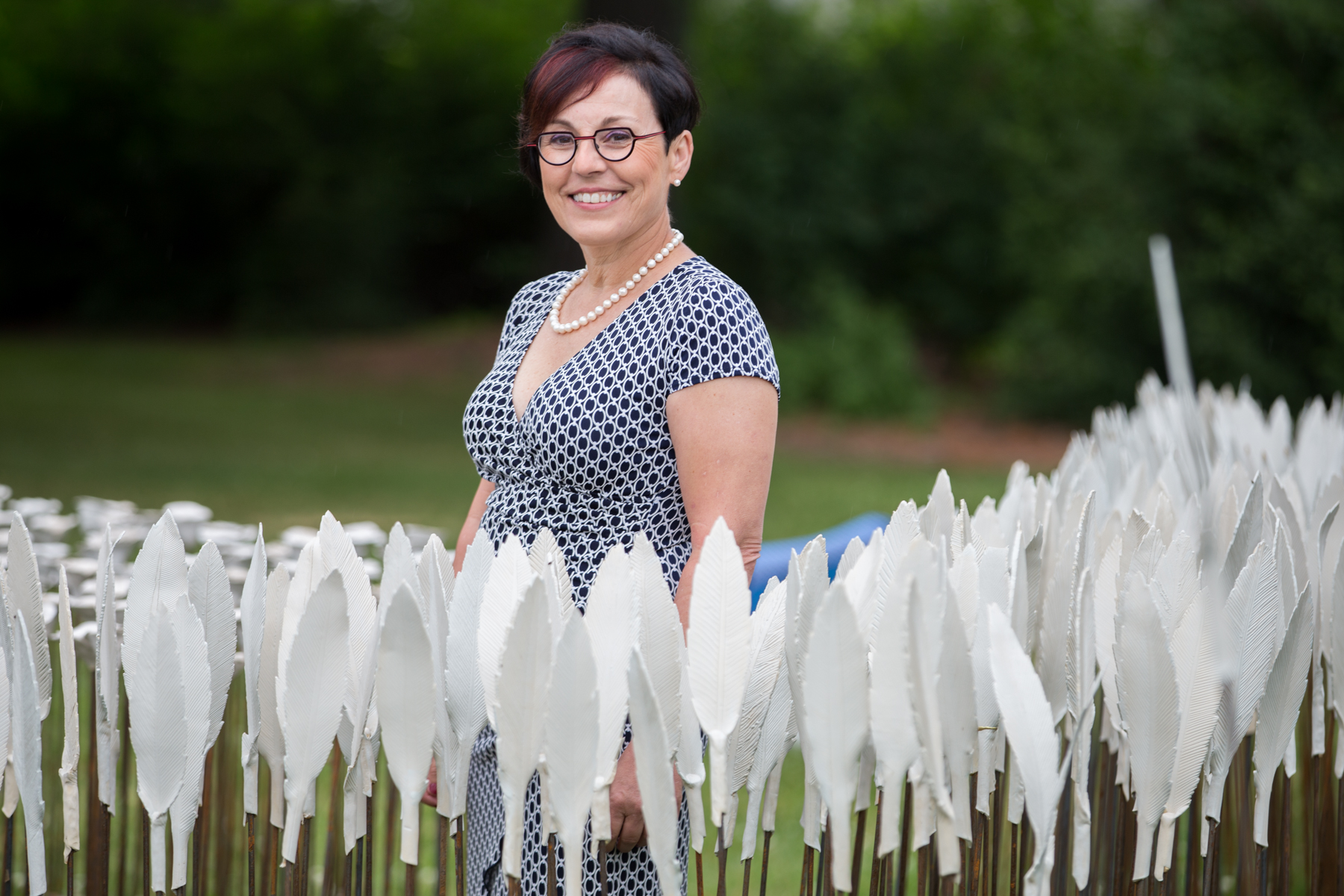 Artist Hilde Lambrechts stands among the ceramic feathers of her art installation Compass: Peace in All Directions on the front lawn of Canada’s Centre for Geography and Exploration, during the exhibit’s launch on Wednesday, June 27. (Photo: Ben Powless/Canadian Geographic)

In addition to Compass, the Summer Exhibits series features two other exhibitions housed inside 50 Sussex: Explore, a series of works by painter Chris Cran depicting some of Canada’s greatest explorers and geographers, and Lessons from the Arctic, an artifact display honouring Norwegian explorer Roald Amundsen, the first person to successfully transit the Northwest Passage.

At an event Wednesday celebrating all three exhibitions, Her Excellency Anne Kari Hansen Ovind, Norway's Ambassador to Canada, spoke of the importance of forming bonds across countries.

“One year ago, I had the honour of launching a special edition of Roald Amundsen’s diaries here as a tribute to 75 years of diplomatic relations between Norway and Canada,” she said. “Once again, I am eager to highlight the strong relationship between our two countries and the importance of our shared polar history.”

Geir Kløver, director of Norway’s Fram Museum and the creator and curator of Lessons from the Arctic, regaled guests with anecdotes from Amundsen’s diaries, including his struggle to adapt to Northern Canada’s harsh climate.

“When you’re living for three winters in Arctic Canada in temperatures of 60 below zero, you pick up a few pointers,” Kløver joked, to laughter from the audience. “What’s important is that Amundsen learned from his mistakes. One of the most important lessons was the relationship he formed with the Inuit — Amundsen was held in great regard, he understood Inuit
culture and beliefs.”

Ambassador Ovind echoed Kløver’s sentiments on the impact Amundsen’s courageous life had on Norway, Canada and the world as a whole. “Even today, more than 100 years later, Roald Amundsen’s impressive achievements in the Arctic and Antarctic continue to inspire researchers and impress polar explorers and ordinary people alike,” she said. 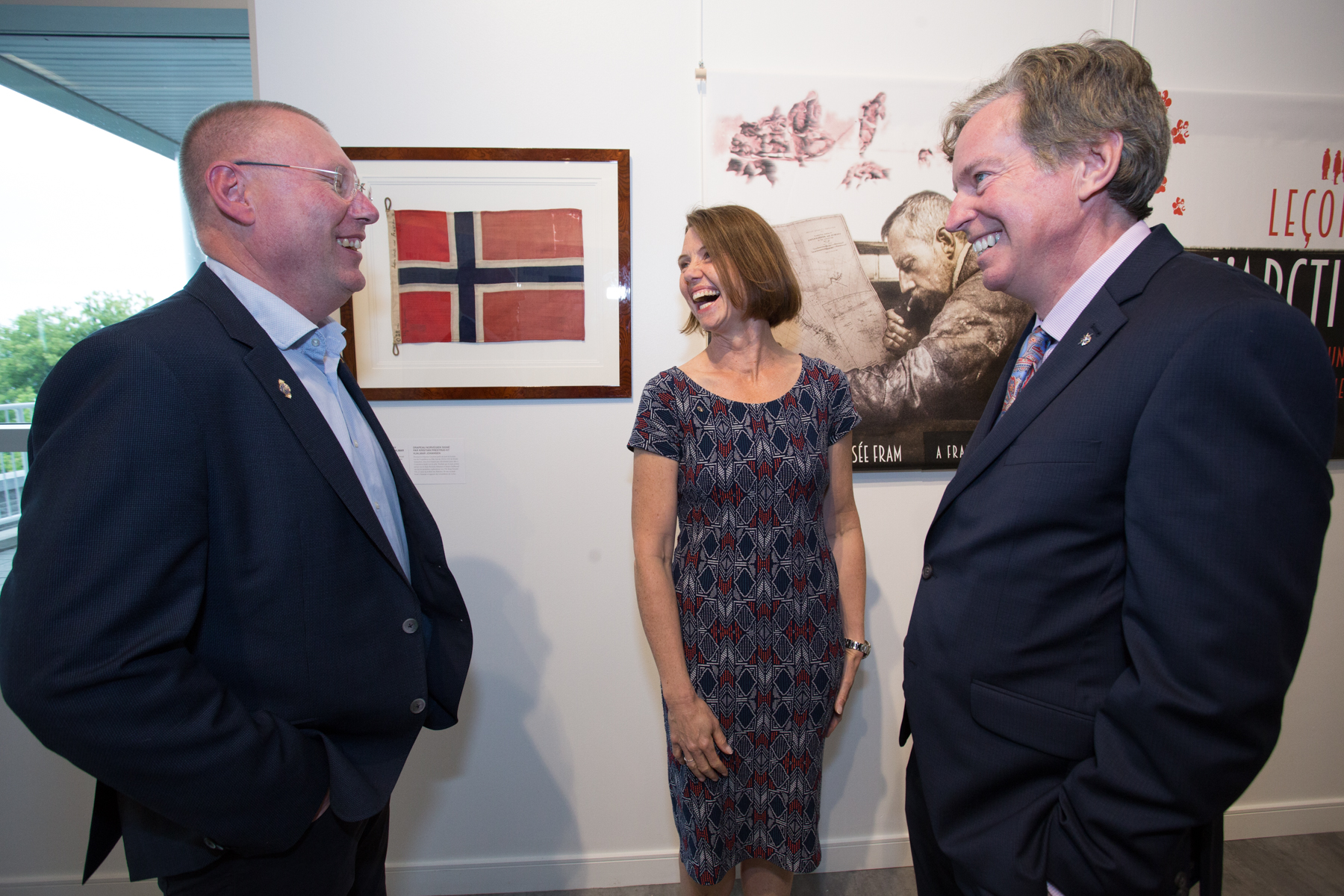 The third exhibit, found in the upper gallery of 50 Sussex, is Explore, an exhibition of paintings by Calgary-based artist Chris Cran. Playing with perception to create an illusionary shift between the abstract and photographic, Cran’s works require participants to be active in their viewing of his art. The paintings feature many of Canada’s most accomplished explorers, all of whom are Fellows of The Royal Canadian Geographical Society, including RCGS founder Charles Camsell, astronaut
Roberta Bondar, geologist Alice E. Wilson, Arctic explorer Joseph-Elzéar Bernier and the late Louie Kamookak, Inuit oral historian and Franklin Expedition expert.

“Chris Cran is truly one of the great forces of contemporary Canadian art, a prolific and influential artistic presence in Canada for decades and a mentor to a generation of rising artists,” says John Geiger, CEO of the RCGS. “This is
a showcase of explorers who were — and continue to be — not only part of the bedrock of the RCGS, but of Canada itself.”

The RCGS Summer Exhibits Series is open to the public in Canada’s Centre for Geography and Exploration at 50 Sussex until Sept. 15, 2018.