Lessons from the Northwest Passage: Roald Amundsen’s experiences in the Canadian Arctic

A foremost Amundsen expert shares some highlights from famed Norwegian explorer’s 1903-06 expedition to the North Pole
By Guest Blogger
July 6, 2018

Last June, the Norwegian Embassy announced the first-ever English edition of polar explorer Roald Amundsen’s 1903-06 Northwest Passage diaries — translated over several years by the Fram Museum of Oslo, Norway, and presented to Canada as a special gift for its 150th anniversary.

Canadian Geographic asked Geir O. Kløver, the world’s foremost Amundsen expert, director of the Fram Museum and a Fellow of The Royal Canadian Geographical Society, to share a bit about the explorer: the scientific advances he made in Canada’s Arctic, his respectful reliance on the Inuit and, of course, his successful first transit of the Northwest Passage, completed in 1905. Read on for more about this pivotal moment in Canada’s and Norway’s shared polar history, and be sure to visit 50 Sussex this summer to explore Lessons From the Arctic, a new exhibit about Amundsen’s accomplishments.

Ever since boyhood, Roald Amundsen had been fascinated by John Franklin’s expedition and tragic fate. The idea of making the first transit by ship through the Northwest Passage began early on to form in his mind. Although Amundsen’s family were traditionally ship owners and sea captains, his mother had wanted him to do something completely different — study medicine. Amundsen complied, but when his mother died, he left his studies and dedicated the rest of his life to exploring the polar regions.

After gaining valuable experience in the Arctic and Antarctic, Amundsen went to Tromsø in 1901 to purchase Gjøa [a 21-metre sloop built in 1872]. For the next two years, he prepared for his expedition to the Northwest Passage. He spent five months in the Arctic with Gjøa’s old crew, learning everything about the ship and navigation in Arctic waters, while catching seal to generate income for the expedition. In addition, Gjøa was restored, strengthened and equipped.

As there were limited game resources in the Arctic to sustain a large crew in the event of a shipwreck, Amundsen hired only six men to accompany him. He wanted a small and tight-knit crew on board Gjøa, who would all have plenty to do during the expedition and who could, to some extent, live off the land and handle the challenges of Arctic life. 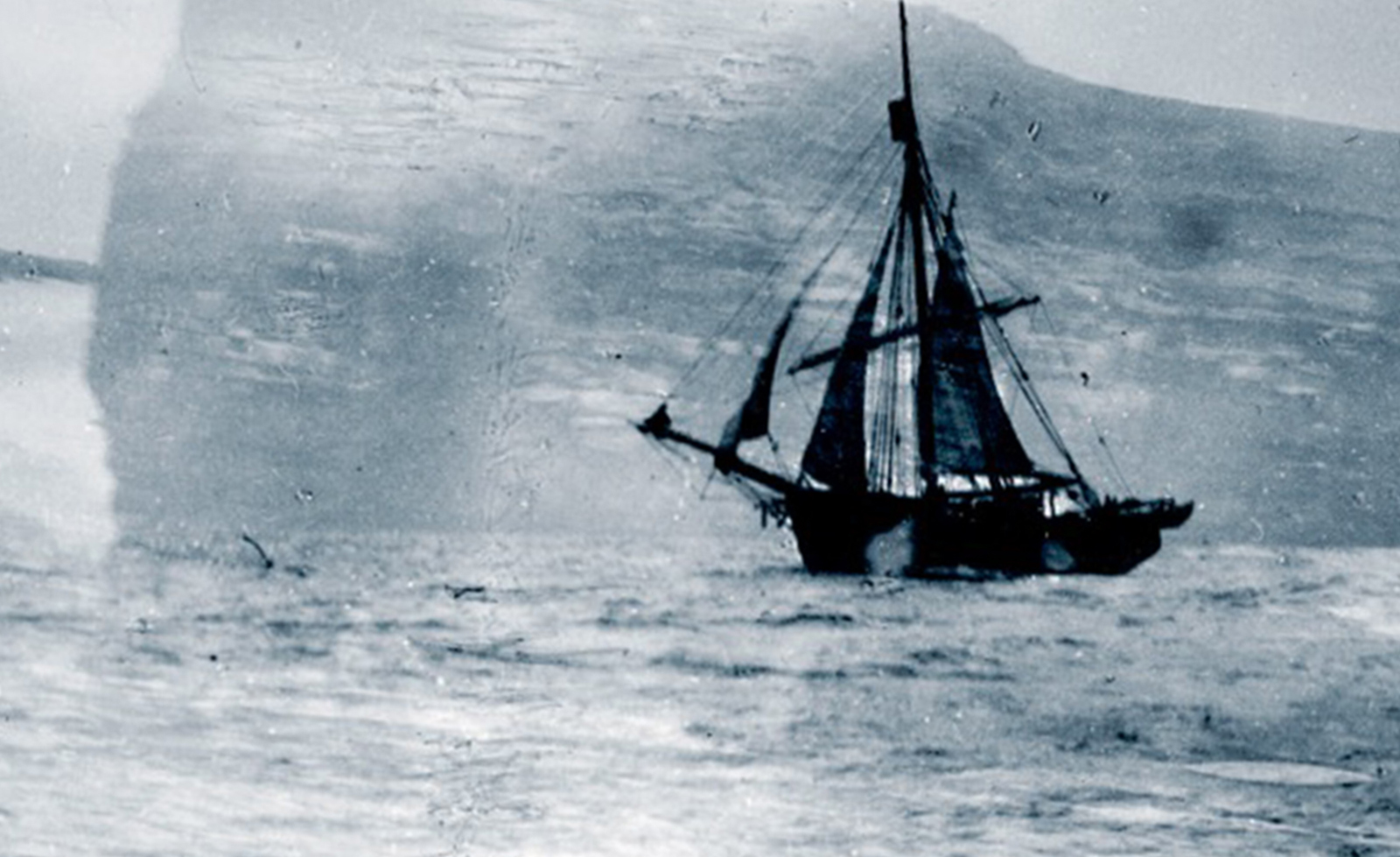 Ice dwarfs Gjøa on the voyage through the Northwest Passage. (Courtesy Fram Museum)

On September 9, 1903, Amundsen sailed into Simpson Strait, south of King William Island in Canada’s central Arctic. The strait was free of ice to the west, and while he could have continued through the Northwest Passage in only one season, he was looking for a good wintering place, having decided to stay for two years to take continuous readings of the North Magnetic Pole. He found a small harbour, which he named Gjøahavn (meaning “Gjøa Harbour” and today called Gjoa Haven), at the right distance from the magnetic pole for a fixed magnetic station.

Near the end of October 1903, a small band of Inuit appeared at Gjøahavn. Soon an Inuit village grew nearby. These were Netsiliks, the most isolated of the Canadian Inuit. Their ancestors had encountered British explorers in the previous century, but this group had never seen a white man before. Amundsen immediately made friends with them and an amicable relationship developed. The Norwegians learned their language and were able to communicate fully with the Inuit. The friendliness and generosity of the Inuit was repaid by the white men’s goodwill and respect. The Inuit taught the Norwegians how to make igloos, to make their sledge runners slide at very low temperatures, the art of dressing warmly in loose furs and how to drive dogs.

In turn, the Norwegians provided the Inuit with knives, needles and matches, other tools of wood and metal and, when needed, food. They hunted together and a number of Inuit assisted in the Norwegians’ daily chores. They went on frequent visits to each other’s camps and studied each other’s cultures. Amundsen was fascinated by these people and their survival skills. He spent a lot of time studying all aspects of their culture and gathered a large collection of artifacts, including clothing, hunting tools, utensils, kayaks and sledges. His diary gives great insights into the lives of the Netsilik Inuit in the early 1900s. The Amundsen collection is today recognised as a major contribution to polar ethnography and was presented to the Cultural History Museum in Oslo. 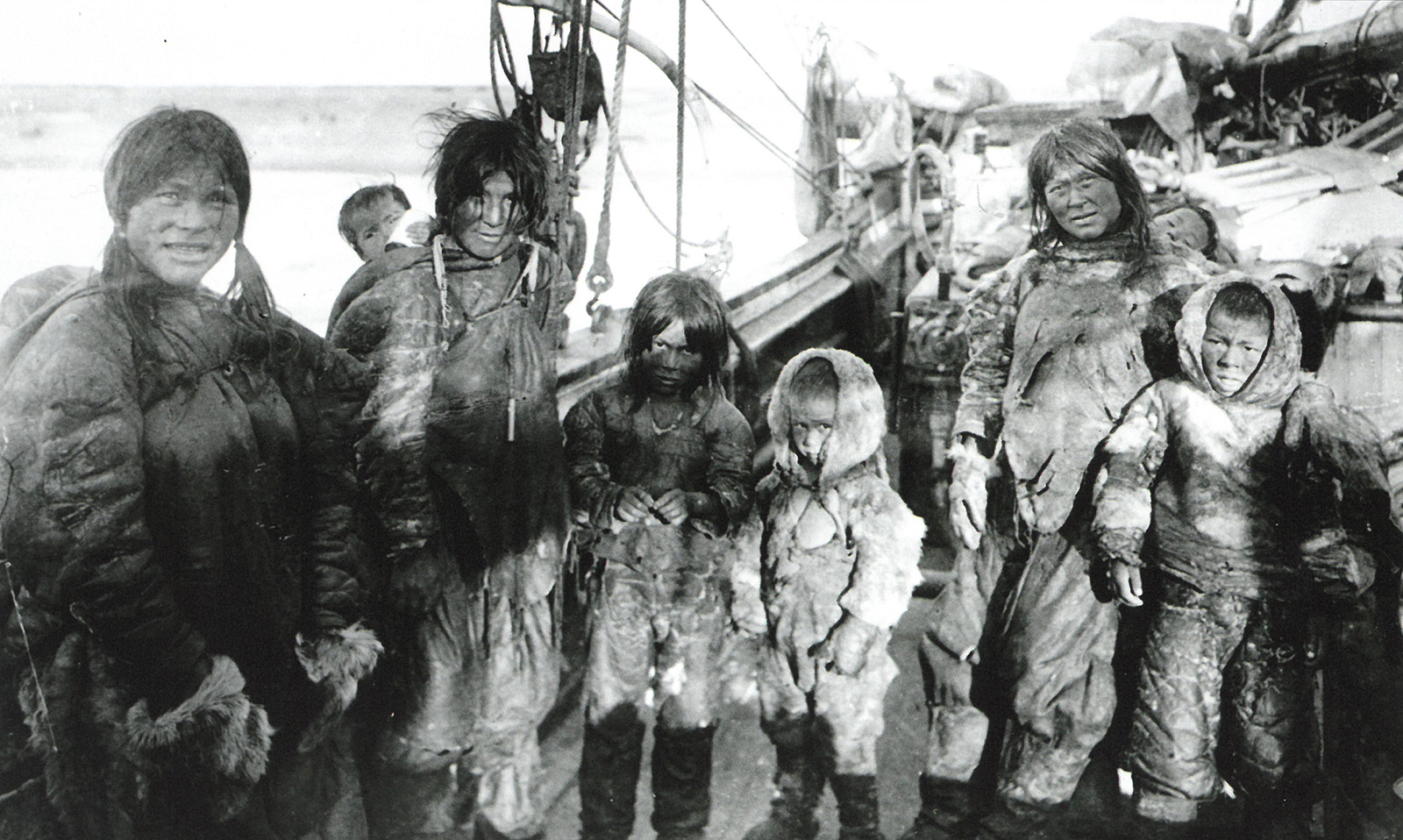 An Inuit family onboard Gjøa, during one of their frequent visits with Amundsen and his crew, near modern-day Gjoa Haven. (Courtesy Fram Museum)

The crew gathered data in a number of scientific fields, but their magnetic observations were most important. Magnetic instruments were soon in operation at Gjøahavn and Gustav Juel Wiik, the expert in magnetic observation on the crew, took the first readings on September 21. Amundsen was the first to demonstrate that the North Magnetic Pole does not have a permanent location, but moves in a fairly regular manner. In addition, his carefully organized measurements were the first and only observations of Earth’s magnetic field in the northern polar regions until modern polar observatories were established decades later, which makes his observations a significant contribution to the worldwide survey of the Earth’s magnetic field in the 20th century. It is a testimony to the scientific abilities of Amundsen and his crew that they designed and carried out the first continuous magnetic variation recording in the High Arctic for a period of 19 months under extremely difficult conditions.

By spring of 1905, Amundsen was ready to resume the voyage westward. On August 13, they sailed out of Gjøahavn and began the difficult navigation of Simpson Strait, but had left the worst part of the voyage behind them and reached Cambridge Bay just four days later. Amundsen and his crew had navigated Gjøa through the “unsolved link” of the Northwest Passage — the part that had never been traversed by a ship. On August 26, 1905, the Charles Hanson, an American whaling vessel, came in sight, and her captain welcomed Amundsen and became the first to congratulate him on his navigation of the Northwest Passage. “The Northwest Passage was done," Amundsen wrote in his diary. "My boyhood dream — at that moment it was accomplished.”

An Illustration of the meeting between the Charles Hanson (foreground) and Gjøa off Banks Island on the edge of the Beaufort Sea. (Courtesy Fram Museum)

Lessons from the Arctic

Life with the Inuit, numerous sledging expeditions and three years in hostile conditions provided Amundsen and his men with an intense learning experience. This would become essential when the explorer was preparing for his next ambitious goal: the South Pole. Amundsen recorded much of this knowledge in his journal; the following are some fascinating highlights.

Between -30 and -60 C, tents were very cold and damp, while igloos were much warmer, windproof and dry. The Norwegians spent several weeks learning how to make igloos quickly and efficiently.

February 3, 1904: “Built an igloo this morning together with Teraiu and H. approx 14 ft. in diameter and 10 ft. high. It is a great sight to behold. It is quite remarkable to watch the Eskimos’ skilled hands at work in the snow.”

March 5, 1904: “The temperature sank to -61.5 C during the night. We had, however, a comfortable night in our igloo. Our sleeping garments had passed the test.” 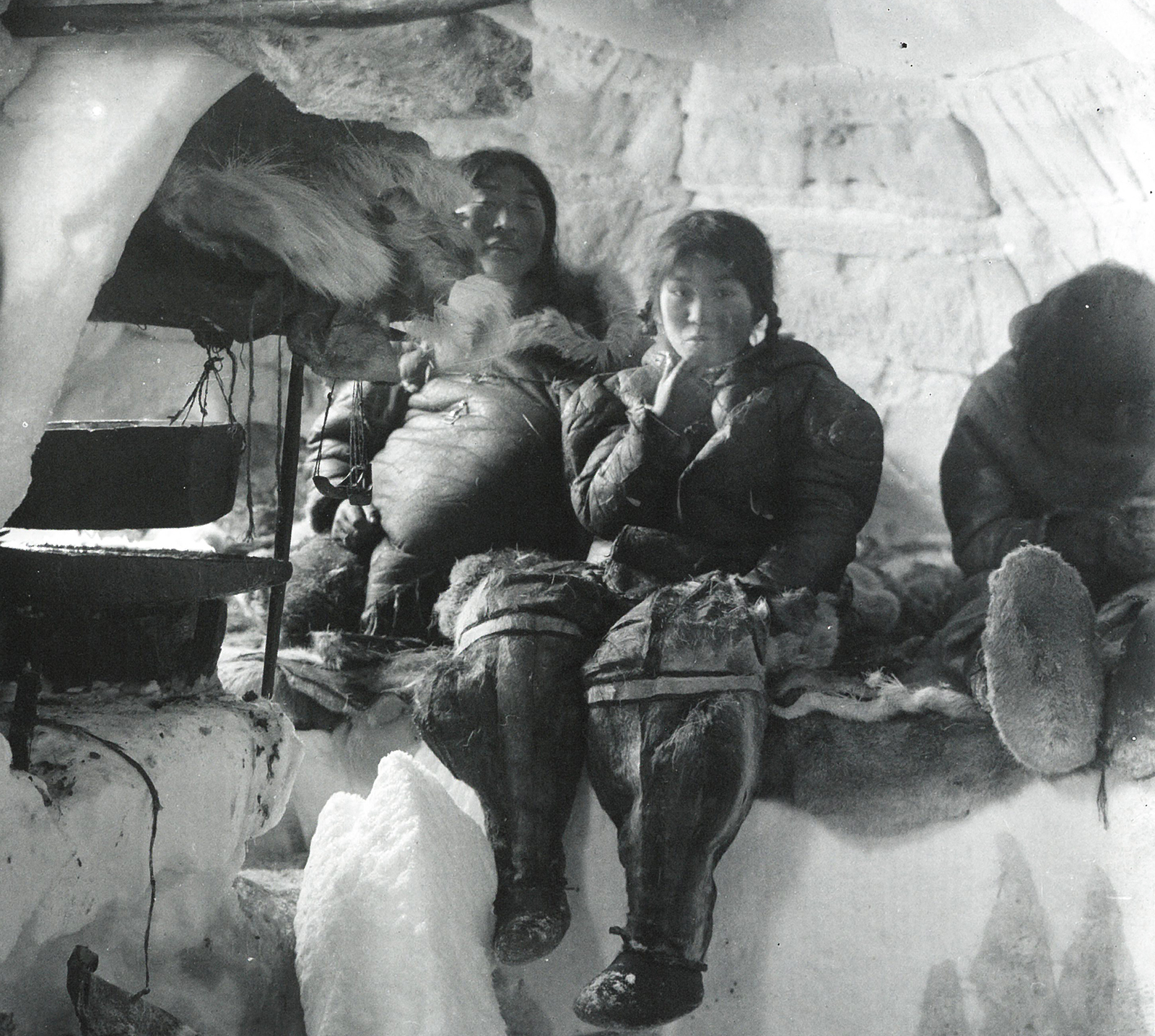 Inside the igloo of an Inuit family on southern King William Island. Amundsen and his crew constructed igloos for themselves with the help of the Inuit. (Courtesy Fram Museum)

The colder the weather, the drier the snow. Below -25 C, snow feels like sand and it becomes extremely difficult to pull heavy-laden sledges. The Inuit taught Amundsen how to wipe thin layers of water onto the sledge runners, which froze immediately and made the sledges slide much better. The Inuit also covered the runners with moss.

March 7, 1904: “Teraiu taught us to prepare the sledge runners using ice. He does this by spitting a mouthful of water into a bearskin mitten, which he then rubs along the runners. It seems the sledges run smoother using this technique. We are going to experiment with it.” 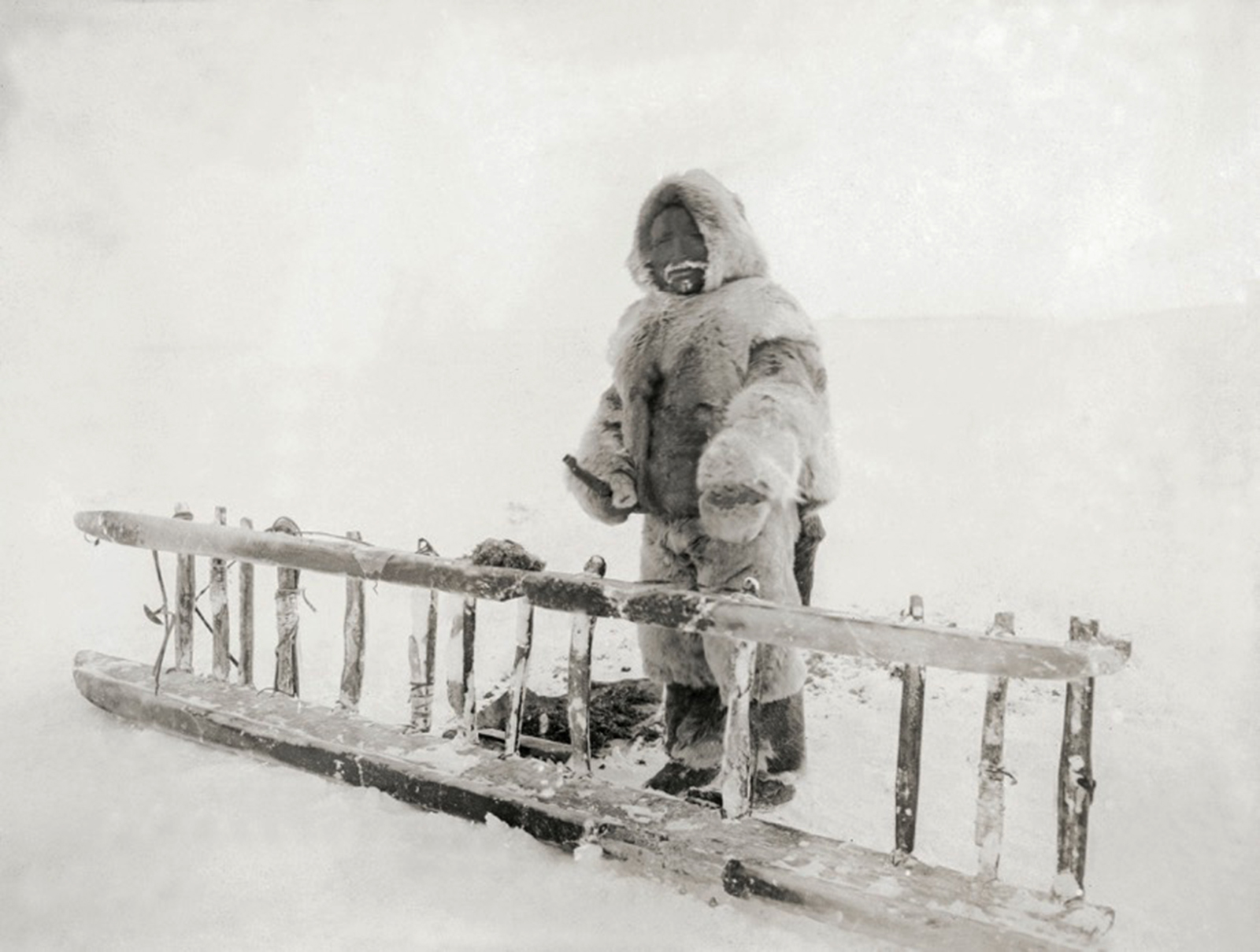 Inuit taught Amundsen how to prepare the sledge runners so they would slide efficiently in extremely cold conditions. (Courtesy Fram Museum)

In conditions where the snowy landscape and the grey sky blended together, the dogs refused to move forward as they could not see where they were heading. The Inuit remedied this by having the women of the family run in front of the dogs or even harnessed in with the dogs. This way, the dogs were more than willing to pull in all kind of conditions. 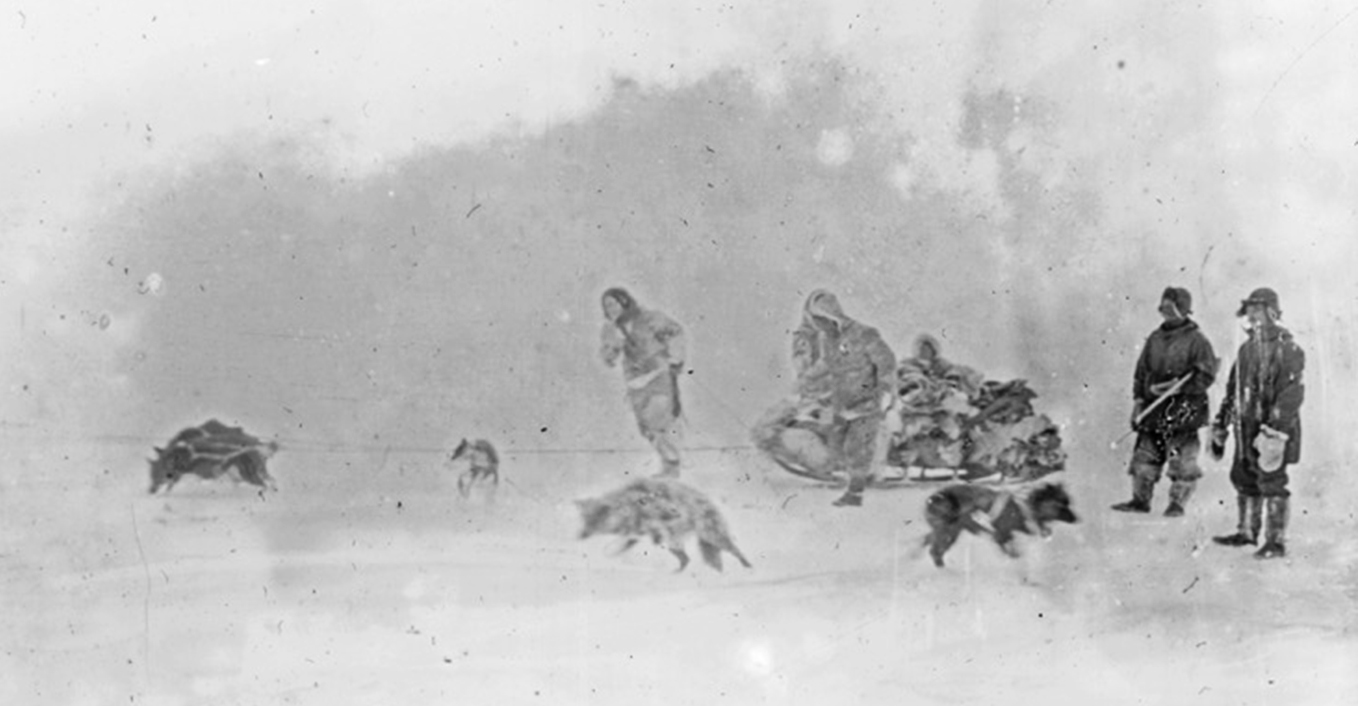 In his diaries, Amundsen describes “seeing the Eskimo women harnessed and pulling the sledges” to encourage the families’ sled dogs to run in conditions with poor visibility. (Courtesy Fram Museum)

Amundsen was aware of the benefits of fur clothing, but the furs provided by the Inuit in Gjøahavn were much more comfortable than the off-the-shelf products from Europe, not to mention far superior in Arctic conditions. Amundsen’s outfit was consistently warm, allowed air circulation to reduce sweat, kept itself clean and was made of local raw materials. His complete ensemble, including undergarments, anorak, hood, mittens and boots, weighed only two kilos, compared to the five kilos of clothing that some of the other men wore.

February 10, 1904: “I stopped using my old clothes, wearing only my Eskimo garb now. Both the inner garments and outer anorak hang loosely around my trousers to allow air to reach my skin. The inner and outer trousers are fastened around my waist with a cord and they hang freely over the knees above my Kamikk so the air also moves freely there. I think it is excellent and the only way to wear such hides if one wants to avoid sweating. Now I can move as I please. I stay warm but I never sweat.”

March 5, 1904: “Snow goggles turned out to be useless. They froze over right away. I suspect Eskimo goggles will be the only appropriate ones in such conditions.”

April 4, 1905: [About crew member Adolf Lindstrøm] “A more talented man for a polar expedition would be hard to find. However, he is impossible in the Eskimo language. His vocabulary consists of the wrong word for ‘Yes’ (amilla) and an even crazier word for ‘very.’ ... The rest of us manage well now. There is nothing we cannot speak with them about now." 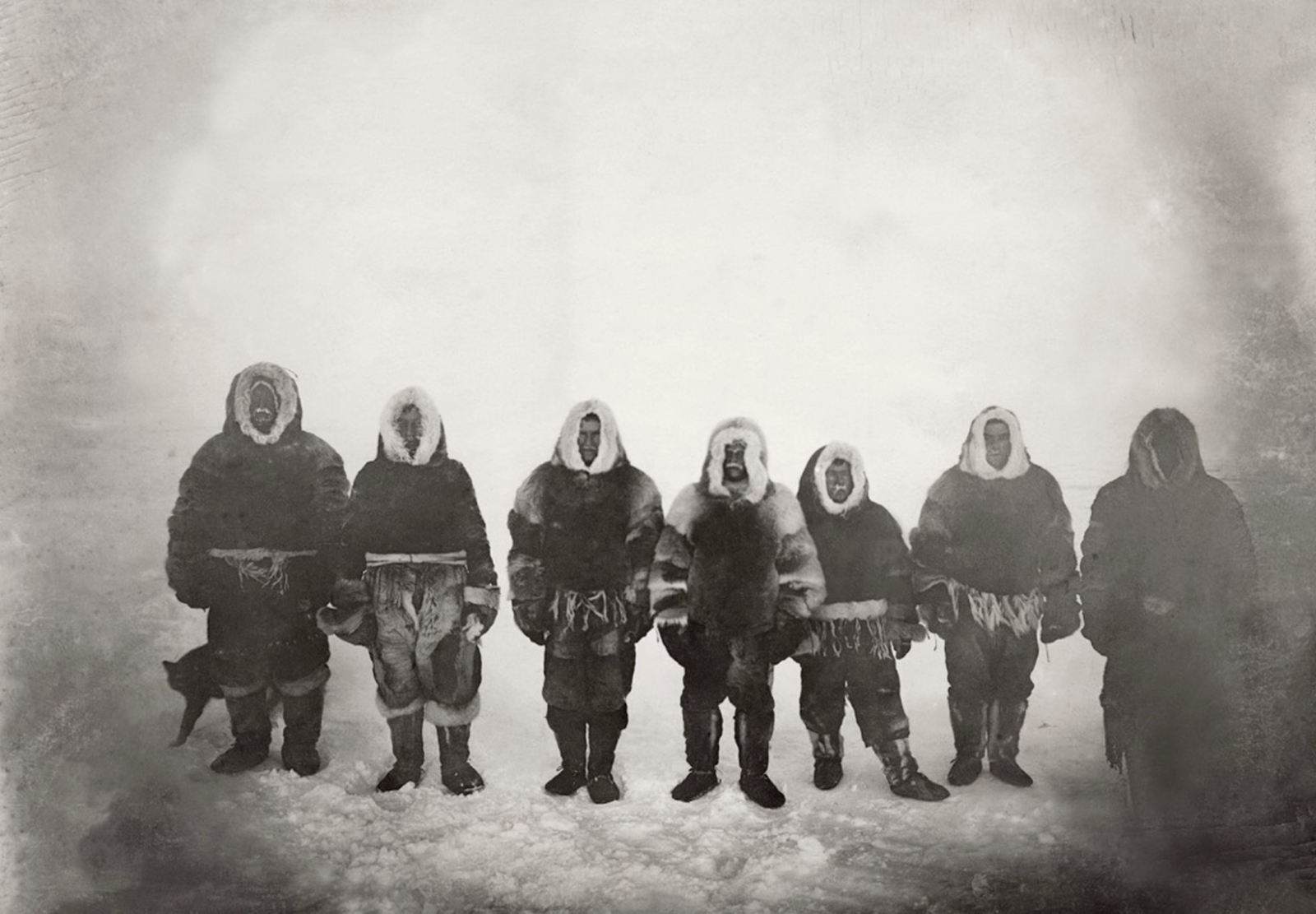 Geir O. Kløver is the director of the Fram Museum in Oslo, Norway. The museum is dedicated to Norwegian polar exploration, the exploration of the Northwest Passage and current issues facing the High North. Geir’s next book, Lessons from the Arctic: How Roald Amundsen Won the Race to the South Pole, deals with Amundsen’s experiences in the Northwest Passage 1903-06, and how he used the lessons learned to plan and execute his successful 1910-12 expedition to the South Pole.