Resilience pays off during a challenging effort to explore new leads in Canada’s deepest cave
By Christian Stenner
January 24, 2020

More than two years have passed since our landmark expedition that confirmed Bisaro Anima to be the deepest cave in Canada — and, in fact, north of Mexico. Subsequent expeditions in 2018 and 2019 discovered added length and slightly more depth, logging a new figure of 674 metres. And all starting from an insignificant slot entrance that could have been lost amongst the more than 150 sinks and holes and 14 caves we have found so far on the Bisaro Plateau.

In November 2019, the stage was set for a return expedition in order to push beyond the known depth.  The logistics were crushing. Thirteen cavers would be underground for a full week, simultaneously occupying three underground camps. It was to be the most people we have had underground at once. Twenty equipment bags of 30 to 40 pounds each were hauled into the cave, much of it to support going beyond the limit of exploration at the most remote and deepest point we have yet discovered, the flooded sump we called Dieppe. Kathleen Graham would be the lead diver, staging from Camp II.

Some of the 40 known leads to unexplored passages were also a high priority and significant efforts were planned to find new ways to get deeper into the mountain. Jeremy Bruns and his team would stage from Camp 0.5, working primarily on climbing the spectacular aven (a vertical shaft leading upward from a cave passage) in the area. My team based at Camp I would continue examining new leads towards Camp II and in another branch at The Rhineland.

On the second day underground our team ferried the equipment to Vimy Ridge. At 400 metres of depth, this stunning 40-metre-tall room contains a vast, steep scree slope. There, while moving lead weights for diving and a cave pack, Graham fell and sustained a serious ankle injury.

As of that moment, Graham’s dive was over. Two years of preparation, and it can all change in an instant. It would take three days of crawling, resting, climbing, and painful hobbling back up to the entrance until she would see daylight. Then, she stayed on the surface for two more days, assisting the team in the cold weather until the helicopter came to pick up our group. Six days after the incident, she was diagnosed with a broken ankle requiring surgery, a plate and six screws to hold it together. 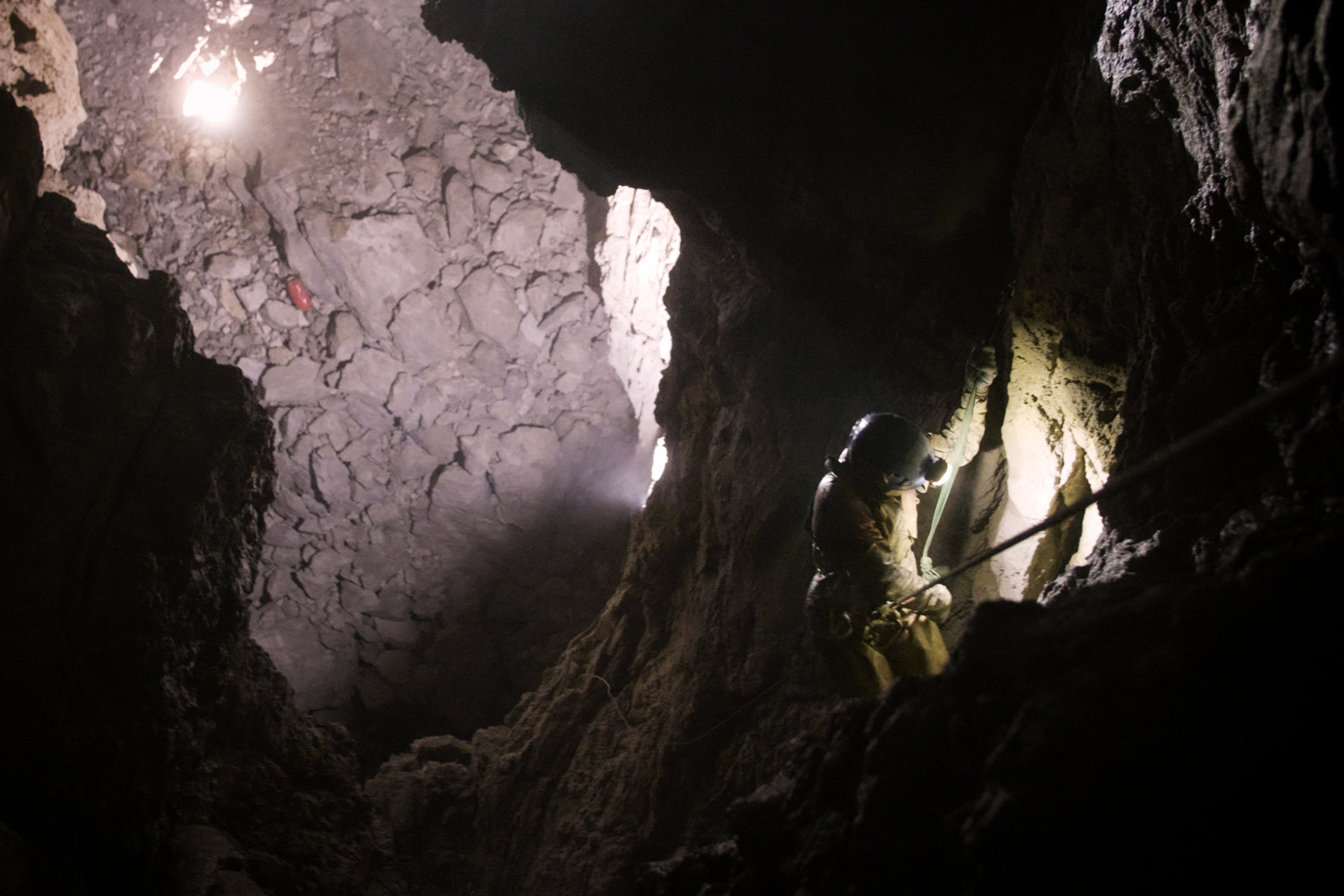 Kathleen Graham rappelling down a pitch inside Bisaro Anima prior to the injury that would end her expedition.
(Photo: Matt Maddaloni/Pegleg Films)

Graham’s resilience spurred on the rest of the team. With resources in place to execute our plans, we continued on. Our backup diver Adam Walker stepped up to complete the second dive ever in the sump, hoping to confirm Graham’s previous observations.

“You arrive at this crystal-clear pool of water where you can see very deep into it. It’s gorgeous,” says Walker of his first view of the sump. He descended into the frigid water and was able to see that the sump continues beyond the deepest point yet reached.

“I descended down to Kathleen’s reel, and the possible way on is still five to 10 metres below that. It looks like it goes underneath a ledge,” he says, adding, “A dive that starts at nearly 700 metres underground … makes you appreciate how much work came from previous expeditions to get to this point. It’s not an easy cave to work in.”

Walker did not push past the previous depth in order to preserve air supplies for a future dive attempt. The cave depth, as proven by survey, must remain the same for now. But reconfirming that there is more to find will drive us forward.

After assisting Graham, we reunited with our team at Camp I. One exciting lead we explored was in The Rhineland. The deepest point in the branch of the cave called Did Nazi that Coming, this passage spirals 200 metres underneath Camp I and has prospective routes which may go deeper. A river intersects the passages there at a depth of 500 metres.

Investigating the river’s origin meant crawling through a tight opening in the cold water. We were rewarded with the discovery of a misty room with a spectacular aven. Water sprayed us from an unseen source high above. Passages splitting off from here were all dead ends, but there was a cavity partway up the slick limestone wall. It will take aid climbing to reach it, but it was remarkable due to its size and apparent downward slope. Currently, it is the best potential way on in that branch of the cave.

Higher up in the cave above Camp 0.5, a large aven called Double Barrel extends upward into the darkness. It has been a target of the team for many of our expeditions, and we finally cracked this void. “We have discovered new levels of the cave system,” says Bruns.

A series of pitches was aid climbed to the top, where several horizontal and vertical passages wait to be explored. “One room was discovered that reaches almost to the surface, making the discovery of a new entrance much more likely,” says Bruns. A new entrance could be an important route for us to get in and out of the cave.

Though what is concealed beyond Dieppe remains unsolved, the new passages we discovered have allowed us to achieve another milestone. The survey data confirms that the known cave length has expanded to 6,599 metres, making Bisaro Anima the 7th longest cave in our country, up from 9th. The passages found revealed more new routes to explore, each having yet to see a human footprint. Unlocking these new levels of the cave, high above Double Barrel and deep down at The Rhineland, could be a significant juncture in the history of Bisaro Anima.

In time these new mysteries in Bisaro Anima will be answered. As with many of the world’s great caves, exploration is a time-consuming process which takes years, not weeks. In caves, we are hampered by the inability to see what is around the corner.  We must continue to anticipate what we can and investigate further with each expedition. The only way to see beyond each corner is to go there ourselves and document the remarkable things we find. 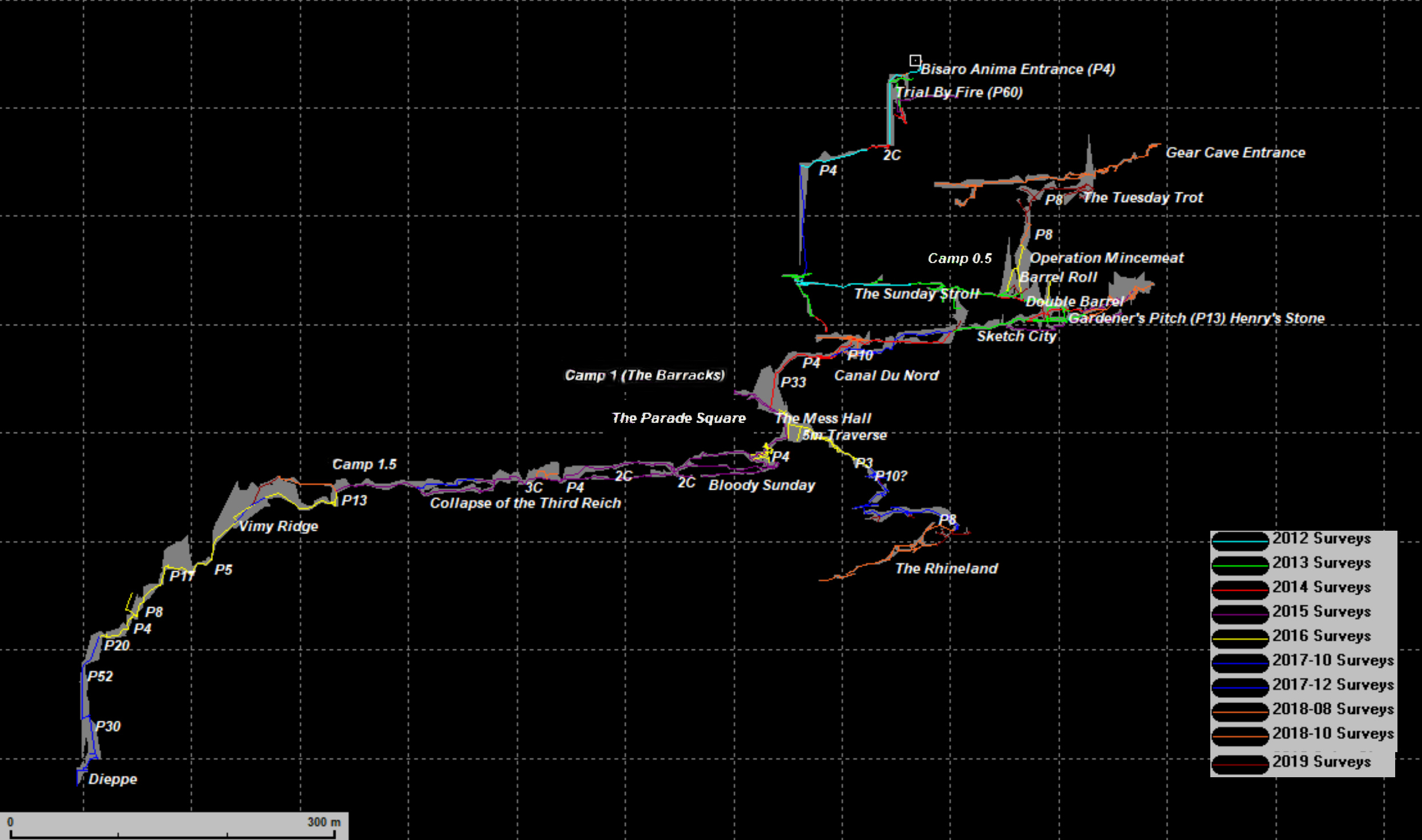 Related: How Canada’s deepest cave, Bisaro Anima, got its name