How Canada’s deepest cave, Bisaro Anima, got its name

Taking a cue from nearby Mount Bisaro, the cave and its passages pay tribute to Canada’s fallen soldiers
By Christian Stenner
April 8, 2019

The practice of naming caves and cave passages comes with both tradition and rules respected by cave explorers. Normally, the discoverers of a new cave or passage get first naming rights. But cave exploration is a team effort, and often groups will vote on proposed names when there are multiple suggestions or disagreements.

Cave passage names originate in one of two ways. First, names can evolve organically over the course of exploration. Someone will nickname a passage and share the name with their teammates and before long, the name sticks. Other times, names are given after an expedition, when the explorers are working on cartography. Both types of names may end up on the published cave map. These names become essential for describing routes and finding key landmarks underground.

In 2012, Jeremy Bruns discovered the entrance to a cave on a mountain plateau near Fernie, B.C. Subsequent expeditions into the cave, including the 2018 Royal Canadian Geographical Society-supported Bisaro Plateau Caves Project, of which I was a part, confirmed it to be the deepest in Canada.

The group named the cave Bisaro Anima, after nearby Mount Bisaro, and passages inside the cave have been named according to a World War theme. That’s because Mount Bisaro itself is named for Pte. Torindo John Bisaro, an Italian-born infantry soldier from Fernie. Pte. Bisaro was listed as killed in action on July 28, 1944, after the Allied invasion of Normandy in World War II. He was 21 years old. As Bisaro Plateau Caves Project co-leader Kathleen Graham explains, “Anima in Italian means heart or soul, or, in Latin, spirit. The name Bisaro Anima identifies the cave as the heart of the mountain, where our heroes’ spirits reside.” 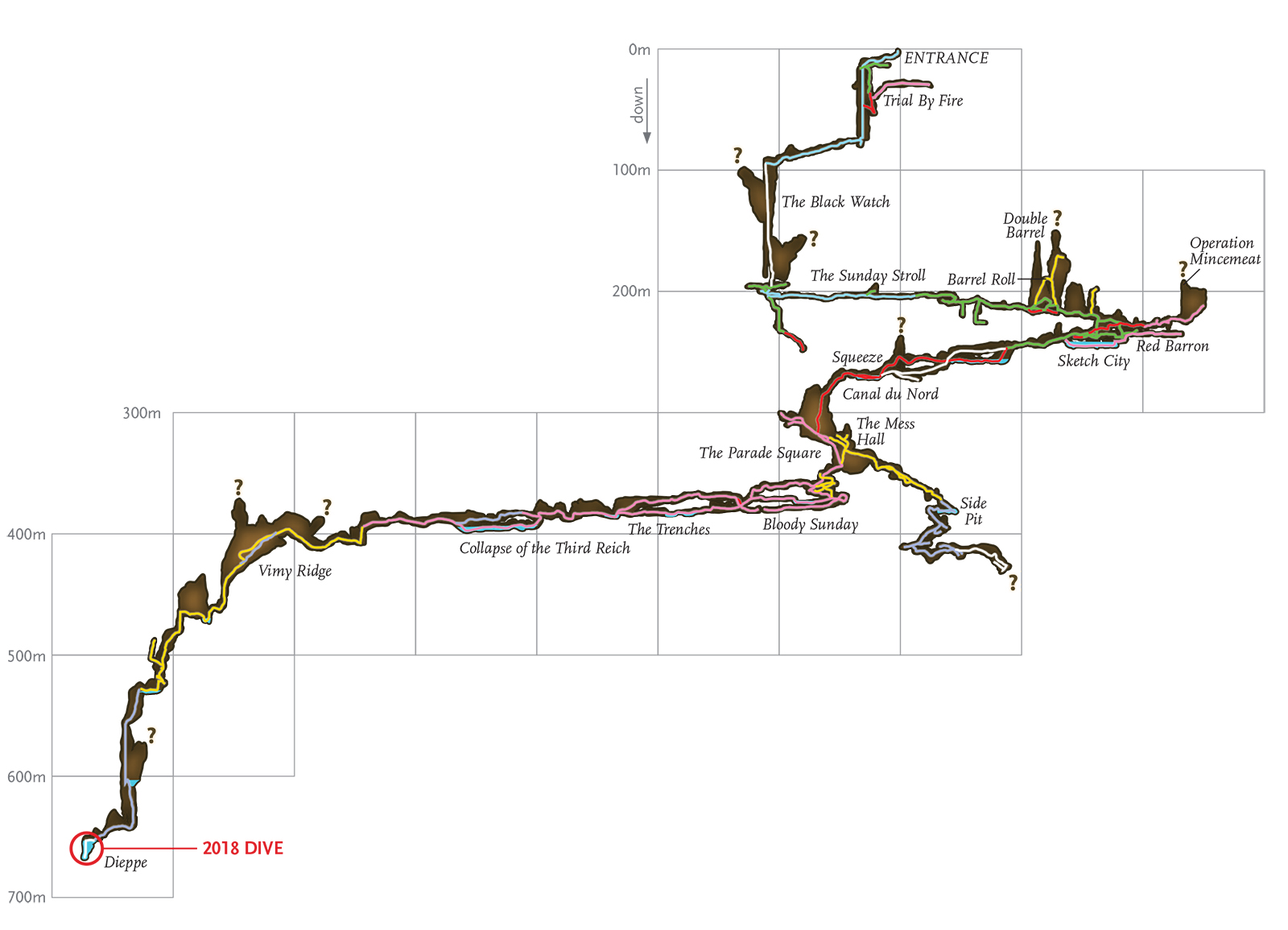 A map of the known passages of the Bisaro Anima cave system. (Map: Chris Brackley/Canadian Geographic)

Pte. Bisaro served in the Royal Highland Regiment of Canada, better known as the Black Watch. Some of the most amazing features in the cave have been named after this storied regiment. The longest shaft in the cave is a 105-metre drop—the equivalent of a 35-story building. Looking over the edge into the abyss, even the most powerful headlamps cannot penetrate the darkness. Its name, “The Black Watch,” conveys the double meaning of an ominous pit and Pte. Bisaro’s regiment. A 60-metre drop, one of the first in the cave, bears the name “Trial by Fire.” It is a long descent or ascent, requiring physical fitness and technical skill on rope. It’s an intense introduction to the challenge of exploring Bisaro Anima.

The names of “The Parade Square” and “The Barracks” were inspired by their form and function. The Parade Square is a large room and junction passage approximately halfway to the current known bottom. Its vast space and high ceiling would be perfect for bellowing drill commands to a platoon formed up in ranks. Instead, the sound of a waterfall pouring into the room echoes off the walls. To the side of the Parade Square, in an alcove, is The Barracks. At 312 metres deep, it is the site of Camp I, which sleeps three to four cavers.

Below Camp I, cavers must traverse a narrow rift, where boulders and rockfall create routes of varying height: “The Trenches.” While traversing the rift, caver David Steele had part of the boulder floor collapse; tons of rocks came loose, completely obliterating the lower route. He called it “The Collapse of the Third Reich.”

Bruns tells of one of the more indelicate names, showing cavers’ sense of humour: “One day, we set out from Camp I across the Parade Square and into the Mess Hall to see if it connected to a known passage below. It did, but beyond that, we also found an entirely new section of the cave we had never explored, and ‘Did Nazi That Coming’ was born.”

In Commonwealth militaries, battle honours are given to regiments to recognize their achievements in campaigns or wars. The Black Watch fought several significant battles in both World Wars, for which they received honours. Passages in the cave now reflect that history as well, with names like “Canal Du Nord,” a First World War battle and a channel in the cave characterized by knee-deep cold water, and “Vimy Ridge,” a vast underground scree slope near Camp II named for the decisive 1917 battle in which four Canadian divisions fought together for the first time.

Most recently, in October of 2018, a new underground river was found flowing through a series of passages below Camp I, at a depth of 500 metres. The maze-like area of cave is now called “The Rhineland” and the river “The Rhine.” The origin of the water is unknown and unexplored leads still exist in this area.

One of the most significant finds in the cave was when the expedition team rigged a series of drops below Camp II, only to come to a flooded sump. This small lake was located 655 metres below the entrance. For Graham, who discovered the sump, “It was a crushing moment, a horrendous setback,” says Bruns. “The beauty of the crystal blue water belied the risky challenge ahead. To find a way on, she would have to return with dive gear and swim down the sandy slope to the depths below. She named this place Dieppe.”

Explains Graham, “My understanding of Dieppe is that commanders were over-eager to send in troops, and underestimated the enemy.” The Dieppe Raid was the first action for the Black Watch in the Second World War. It was a significant and costly battle for Canada: 907 Canadians were killed, 586 wounded, and 1,946 captured. 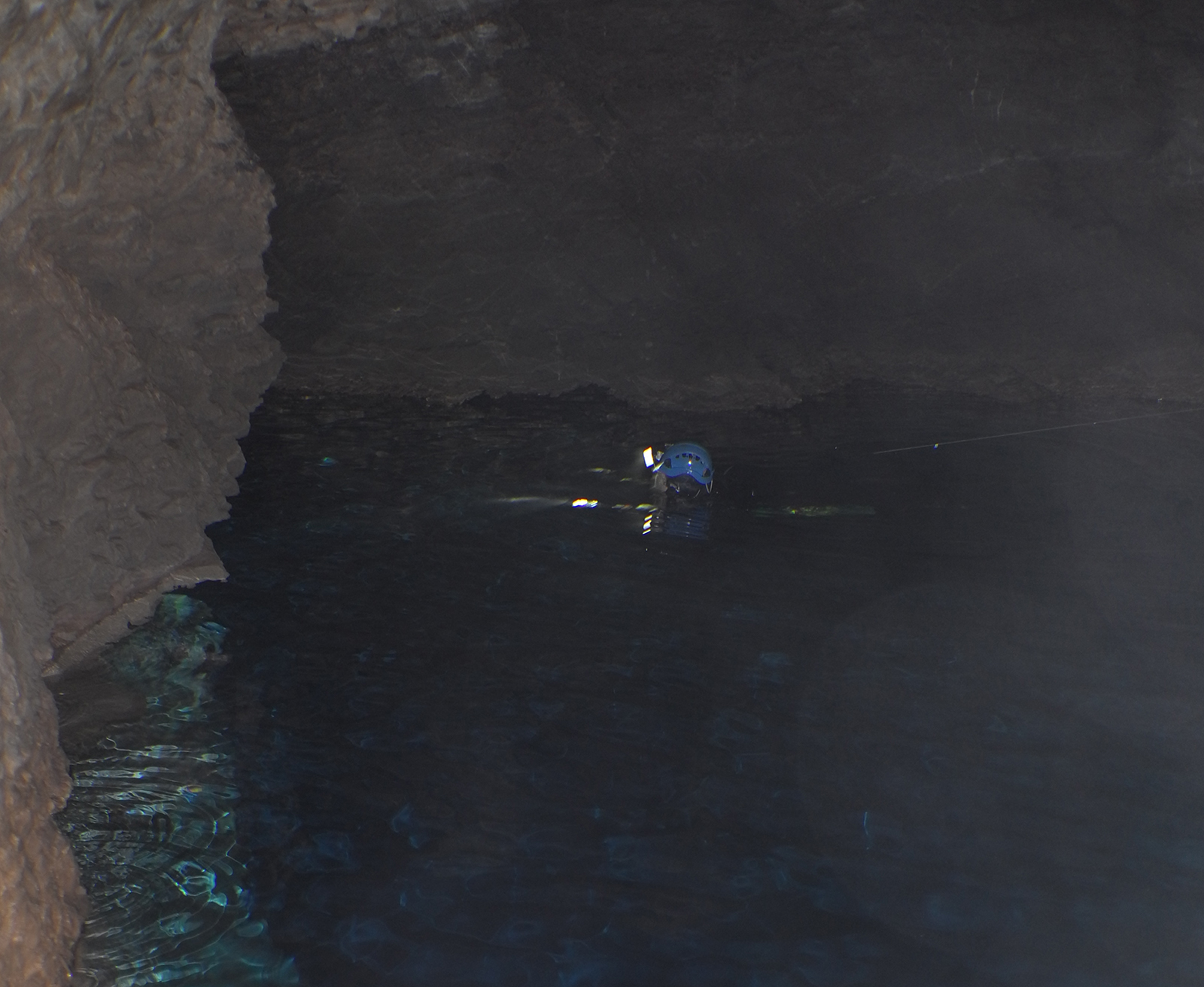 Kathleen Graham inside the sump known as Dieppe. The team was at first discouraged upon discovering the flooded cavern, but Graham was able to complete a dive inside the sump in January 2018. (Photo: Jared Habiak/Bisaro Plateau Caves Project)

The team returned to Dieppe on New Year’s Day 2018. There, Graham completed a cave dive and measured fifteen metres of additional depth in the sump.  This dive, one of the most remote ever completed in our country, confirmed this cave to be deeper than any other in Canada and the continental United States.

Under the water at Dieppe, an unexplored passage still beckons. If these and the other leads are ever explored, the team hopes to continue to honour new discoveries with names reflecting Canadian military history. “Next year, with different gear and more training, I’ll return to the sump,” says Graham. “I am hoping the sump is a P-trap, meaning I’ll dive down, pass a constriction and then rise to an open-air passage — perhaps a beach we can call Juno.”