Hearts in the Ice: Weather and Climate | Canadian Geographic

Hearts in the Ice: Weather and Climate

From sea ice to ocean currents, Svalbard has a unique yet fragile environment that may look very different as climate change shifts weather patterns
By Tanya Kirnishni
January 31, 2020

If you ask a Svalbard local what they most look forward to each year, you might be surprised by the answer. In Longyearbyen, the northernmost year-round settlement on Earth, many people eagerly anticipate the polar nights that pitch the Arctic archipelago into darkness. These long, dark winters have a way of bringing the community closer together. For nearly four months (the dark period starts at the end of October and doesn’t end until mid-February) the town of Longyearbyen appears as a string of lights in a frozen river valley along Advent Fiord.

Located far north of the Arctic Circle, at 78 degrees north, Svalbard’s glaciers, wildlife and rugged Arctic terrain draw explorers, scientists and tourists from all over the world and at all times of the year. One such pair of adventurers, Sunniva Sorby and Hilde Fålun Strøm, launched their nine-month Hearts in the Ice (HITI) project with the ambitious goal of overwintering in a remote hunter’s cabin (called Bamsebu) on the shore of Svalbard’s Van Keulen Fiord. They are halfway through their stay and are busy gathering environmental data and performing other research as part of citizen science projects for organizations such as NASA and the Norwegian Polar Institute.

“We are in total darkness here at Bamsebu,” Sorby and Strøm wrote in their weekly log in mid-January. “Dark, save for the brilliant display of the night sky, fast-moving satellites, shootings stars and those many magical auroral displays that feel like they shine just for us.”

Likewise, there is no doubt that Svalbard’s climate, which paints the landscape in broad strokes of ice, snow and dramatic skies, inspires anyone who visits. The archipelago is considered subpolar because of its proximity to the North Pole, about 1,300 kilometres away. Such climates experience long, cold winters and cool, mild summers.

In the winter, Svalbard’s temperatures can dip to -30 C, while summers rarely break 10 C. Nevertheless, that is considered relatively warm for the latitude, and is due to the West Spitsbergen Current (a branch of the Gulf Stream) bringing warmer waters from the south and moderating the climate. The opposite happens in the north of the archipelago, with the East Spitsbergen Current pulling in cold Arctic waters. When these two currents mix in the Barents Sea, fog is a common sight. Svalbard doesn’t get much precipitation, except in the form of snow during the colder months.

Those who visited Svalbard only a decade ago, however, might not recognize it today. With the Arctic warming twice as fast as the rest of the planet, Svalbard is undergoing changes that are impacting its wildlife, landscapes, ocean, glaciers and urban settlements. 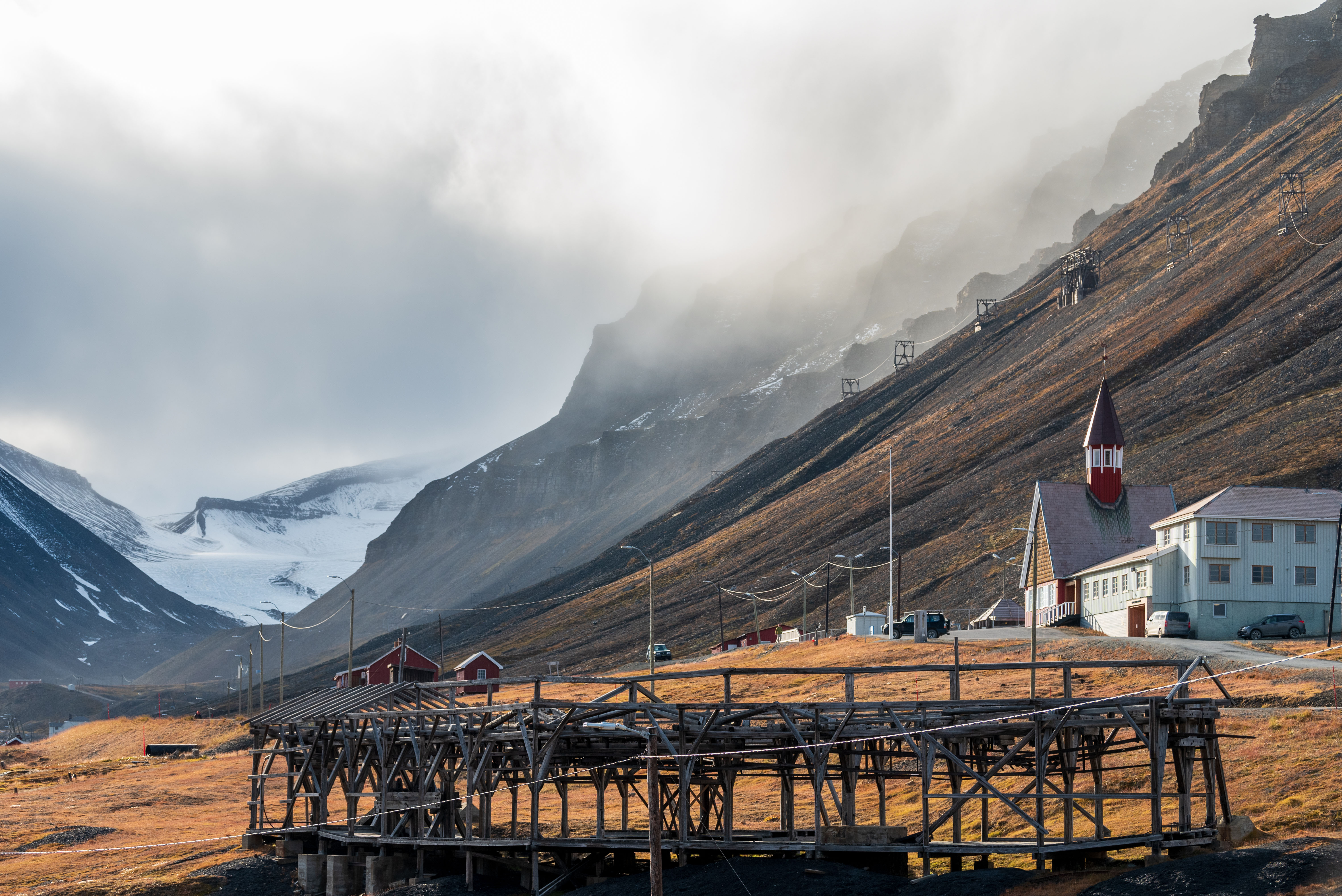 Clouds coming down the mountains into the town of Longyearbyen. (Photo: Tanya Kirnishni/Can Geo)

What the data is telling us

Svalbard’s winters have been steadily getting warmer. Over the past five decades, the average annual air temperature rose between 3 C and 5 C. Surrounding ocean temperatures are also warming. The Gulf Stream brings warmer waters from the Atlantic Ocean to the Arctic, which contributes to melting sea ice along Svalbard’s shores.

The weaker and more unpredictable sea ice conditions have widespread effects for marine wildlife. Polar bears have been observed engaging in unusual hunting habits. The shrinking sea ice affects the bears’ ability to catch seals surfacing for air at breathing holes. Instead, bears are resorting to stalking and ambushing prey, which requires more of their energy.

Svalbard’s climate is not only getting warmer but also wetter. More and more rain has been recorded during the wintertime. This precipitation freezes, creating a layer of ice over the snow and making it difficult for species such as Svalbard reindeer to get at the vegetation beneath. Ice build-up on land has also caused serious issues for Svalbard’s urban settlements, with an avalanche in Longyearbyen killing two people in 2015.

A graph of the annual mean temperature at the Norwegian Arctic stations in Svalbard. (Based on data from MET Norway)

These issues will only worsen, according to the Climate in Svalbard 2100 report by the Norwegian Centre for Climate Services:

Glaciers have retreated several kilometres in some cases, as shown here in a comparison of the Hornsund Fiord between 1990 and 2017. (Image credit: NASA)
Resources for teachers

Follow the Hearts in the Ice (HITI) project and learn more by subscribing to the Can Geo Education newsletter or by following us on Twitter and Facebook. Educators can connect virtually with the HITI team through monthly Google Hangouts via Exploring by the Seat of Your Pants (EBTSOYP). On January 14, EBTSOYP hosted an event with Sorby and Strøm, along with explorer and adventurer George Kourounis, to discuss weather in Svalbard. Check out the YouTube link here. The next Google Hangout, happening on February 13, 2020, is about the citizen science projects for which Sorby and Strøm are collecting data.

Canadian Geographic Education offers free educational resources on a variety of geographic themes, including weather and climate. Teachers can book the Arctic Circumpolar Giant Floor Map (or tiled map) to learn more about Arctic landscapes and natural resources and to explore climate graphs from various locations within the Arctic Circle. Our Canada from Space Giant Floor Map (or tiled map) also has great resources related to weather, the atmosphere and climate change.