Q&A: Why two female adventurers are preparing to overwinter in Svalbard, Norway

Sunniva Sorby and Hilde Fålun Strøm share details of their “Hearts in the Ice” project and why they want to inject hope into the conversation about climate change
By Tanya Kirnishni
October 1, 2019

Imagine spending nine months — a third of them in complete darkness during the polar night — in a cabin 140 kilometres away from the closest settlement. That’s what lies ahead for Sunniva Sorby and Hilde Fålun Strøm, who will be the first women to overwinter in Svalbard, a Norwegian archipelago located above the Arctic Circle at 78 degrees north. They will be broadcasting and sharing their experiences through the Hearts in the Ice project, which they hope will contribute to the global dialogue about climate change and raise awareness of its effects on the Arctic and Antarctica.

During their time in Svalbard, Sorby and Fålun Strøm will be gathering data for six different citizen science projects, in partnership with organizations such as the Norwegian Polar Institute and the Scripps Institution of Oceanography. They will also hold live satellite calls with schools around the world. Canadian Geographic Education will be supporting Sorby, a Fellow of The Royal Canadian Geographical Society, and Fålun Strøm in their educational outreach.

The day before they were set to be dropped off at Bamsebu, the historic trapper’s cabin that will be their home for most of the next year, Sorby and Fålun Strøm sat down with Canadian Geographic to talk about their hopes for Hearts in the Ice. 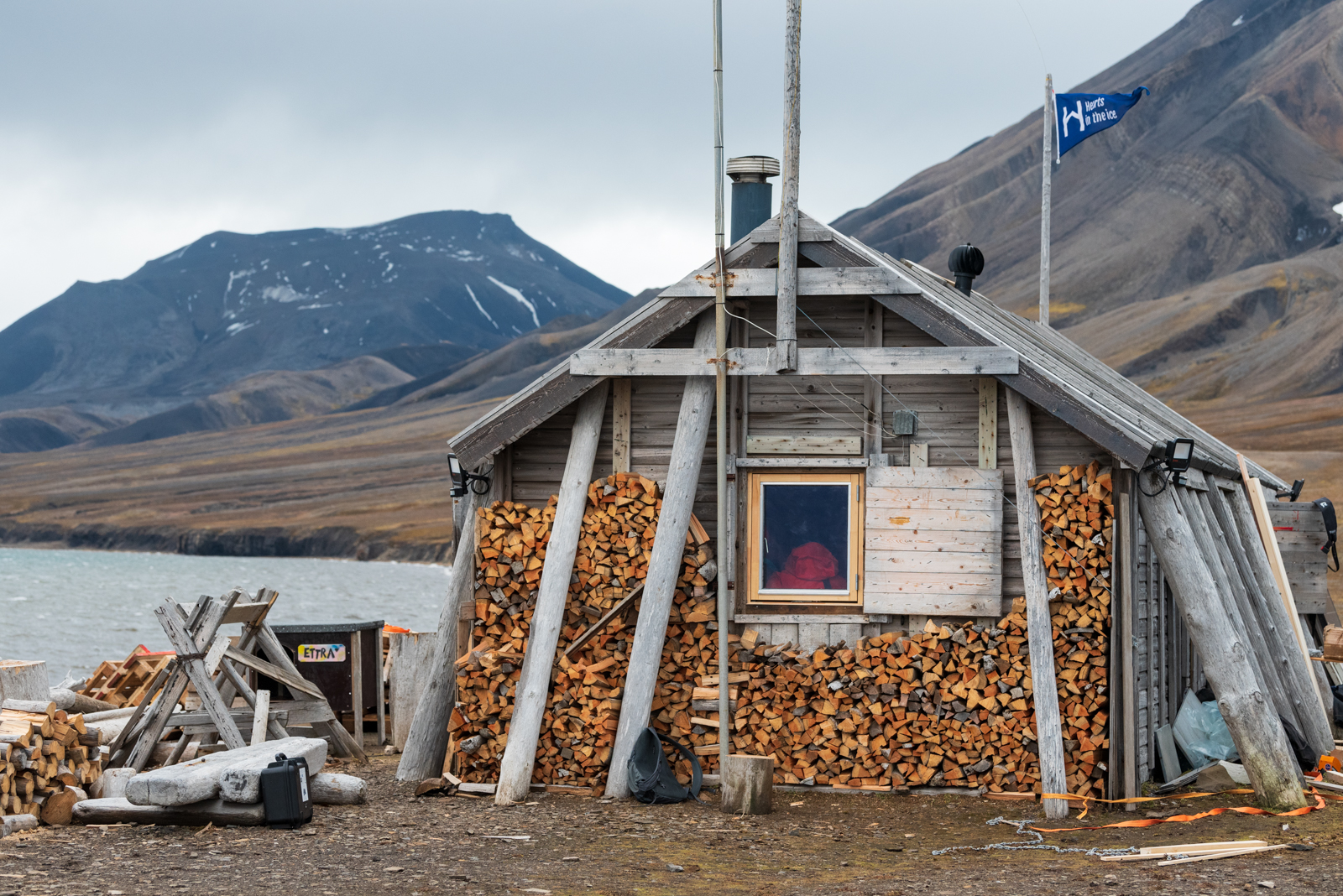 Sorby and Fålun Strøm will be staying at Bamsebu, a historic trapper’s cabin on the shore of the Van Keulen fiord. (Photo: Tanya Kirnishni/Canadian Geographic)

On the movement they want to inspire

SS: I have felt personally that there’s a lot of doomsday messaging out there, a lot of news that is overly depressing. Of course the facts speak volumes about the devastation that is happening around the world with our marine animals, with people being displaced because of extreme weather, with plastic in the oceans. We’re trying to infuse something positive and inspiring into the conversation because we want to mobilize people. I don’t know about you, but I don’t get inspired by somebody who’s trying to hit me in the head with a two-by-four. I get inspired by people who are saying something that makes me want to care and fall in love with something. And so, both of us, with our polar differences, Arctic and Antarctic, our lives and experiences, are really trying to share the gifts of our careers and integration with the natural world, using ourselves as stories to really get people outside and understanding the natural world.

HFS: What we are also very interested in is to share knowledge. I have learned so much just in the last year through these projects — about phytoplankton, microplastics — and I think that wisdom is something that we should spread to everyone. I believe that soon it will be cool to make the right choices, to be a thoughtful consumer, to be a part of change. The goal of our movement is to engage everyone in a positive way, to teach people about all the scientific projects we are on, and to try and inspire people to make thoughtful decisions in their daily life.

On their message to young people

HFS: I think every kid around the world has a feeling about what’s going on and they are more concerned than we the adults have been. We want to inspire them to make the right choices in their daily life, to be a part of the discussion, and to help their parents or grandparents make the right choices. I think that our shared love for nature can sort of invite them to get them involved in nature. Then, if they start to care about it they will start to protect it.

SS: There’s a whole world that we don’t see with the kids, and it’s all the stuff that lives inside them — mental illness, isolation, suicide on the rise, a lack of purpose. There is something called “climate despair” and it’s a real thing with kids today. It’s pretty hard to hear that we’re handing over this world where the kids are feeling climate despair. And they don’t know what to do about it, so they hide behind their screens, spending time alone. But every single person out there has a purpose, and the planet needs for them to be engaged. If there are youth out there who are feeling like an outcast, like they don’t matter, they do, because we are living in a world that needs every single person to participate.

On what inspired them to start this project

HFS: I came to Svalbard 24 years ago, and in the last 10 years, I’ve seen huge changes. When I arrived in 1995, it was a climate desert, very dry and no greens, a lot of ice, a cold and stable winter, no ice on land. Now everything is turned upside down; we have no ice on the sea and more ice on land, because it snows and rains, then melts and freezes over again. The sea brings in new species and we have a lot of plastic that is coming on the currents. When I met Sunniva, we started to talk about this and created Hearts in the Ice.

SS: I feel like the integration between all the generations coming together and learning from each other is a huge part of my motivation. When I met Hilde, one of the questions we both asked was, if we were to go to Bamsebu together, given all our experience and the connectivity of all the people that we’ve met over the years, what could we do that’s relevant to the conversation around climate change? And so Hearts in the Ice was born. It’s not about us; we just pulled all the loose threads in together, and we’re the nucleus.

Connecting classrooms to Hearts in the Ice 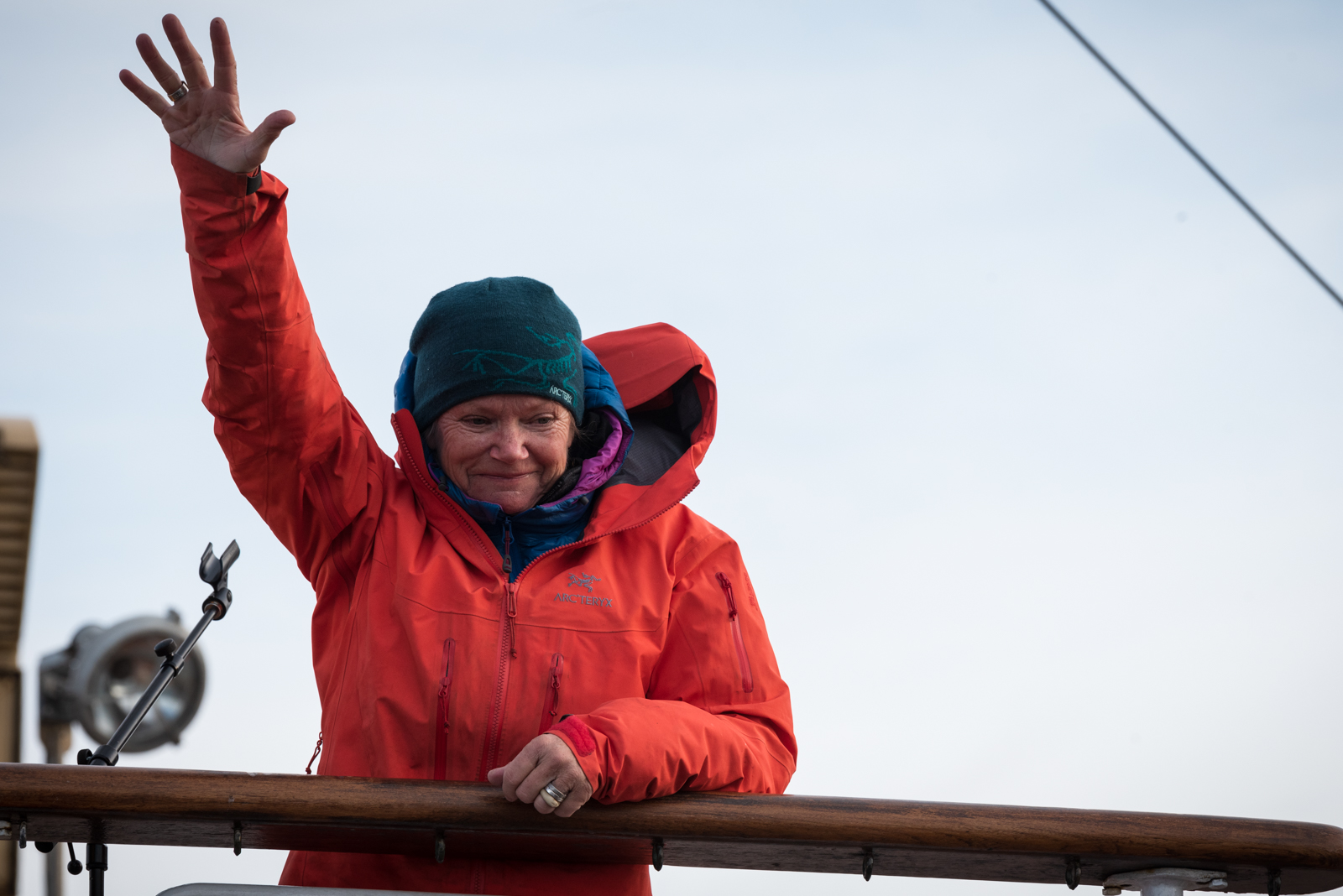 There are many ways that teachers can bring Hearts in the Ice into their classrooms. For the duration of the Hearts in the Ice expedition, teachers can sign up for themed monthly video calls and, using video conferencing, can connect directly with Sorby and Fålun Strøm, as well as an expert for each theme. Teachers are encouraged to follow along and to sign up for a Google Hangout spot on the Exploring By The Seat Of Your Pants website.

Can Geo Education will also be writing monthly blogs connected with these themes and providing educators with a more in-depth look at Svalbard and the effects of climate change in the Arctic. Educators can follow along by subscribing to the Can Geo Education monthly newsletter and following our social media channels (Facebook, Twitter and Instagram).