Hearts in the Ice: Drone technology

Drones are providing new ways of tracking wildlife and mapping changes in the Arctic
By Tanya Kirnishni
January 10, 2020

In the Hornsund fiord, at the base of a glacier streaked with blue veins of compressed ice, Eric Saczuk waited patiently for the winds to die down. He had flown thousands of kilometres to the remote Norwegian archipelago of Svalbard, and travelled hundreds more by ship, to test out his drone equipment as part of an international citizen science project.

Sunniva Sorby and Hilde Fålun Strøm launched their nine-month Hearts in the Ice (HITI) project in September. Saczuk, a professor at the British Columbia Institute of Technology and an expert in remote sensing and geospatial technologies, met Sorby three years ago when he was conducting a drone study in Antarctica. This led to their collaboration at the opposite pole of the Earth. For the HITI project, Saczuk provided Sorby and Strøm with drone equipment so that they could gather data about surface air temperatures and take aerial photos of glacial sedimentary deposits over the course of their stay in a remote part of southern Svalbard.

“The technological barrier to this type of equipment isn’t very high,” Saczuk explains. “It does require a little bit of training, but the training happened right there in the field, within an hour or two. I can train citizen scientists, like Sunniva and Hilde, to capture the images, and then the processing is something I would do.”

Flying a drone over the Arctic landscape of Svalbard isn’t without its challenges. Weather is the deciding factor in whether you can get a drone airborne. Saczuk’s experiences in Antarctica helped him to anticipate the Arctic conditions in Svalbard.

“I quickly learned that you’ve got a certain window of opportunity during which you’re able to launch the drone safely,” he says. “If it’s snowing too much, the winds are too high, or the visibility is low, those are physical barriers to drone operation.” 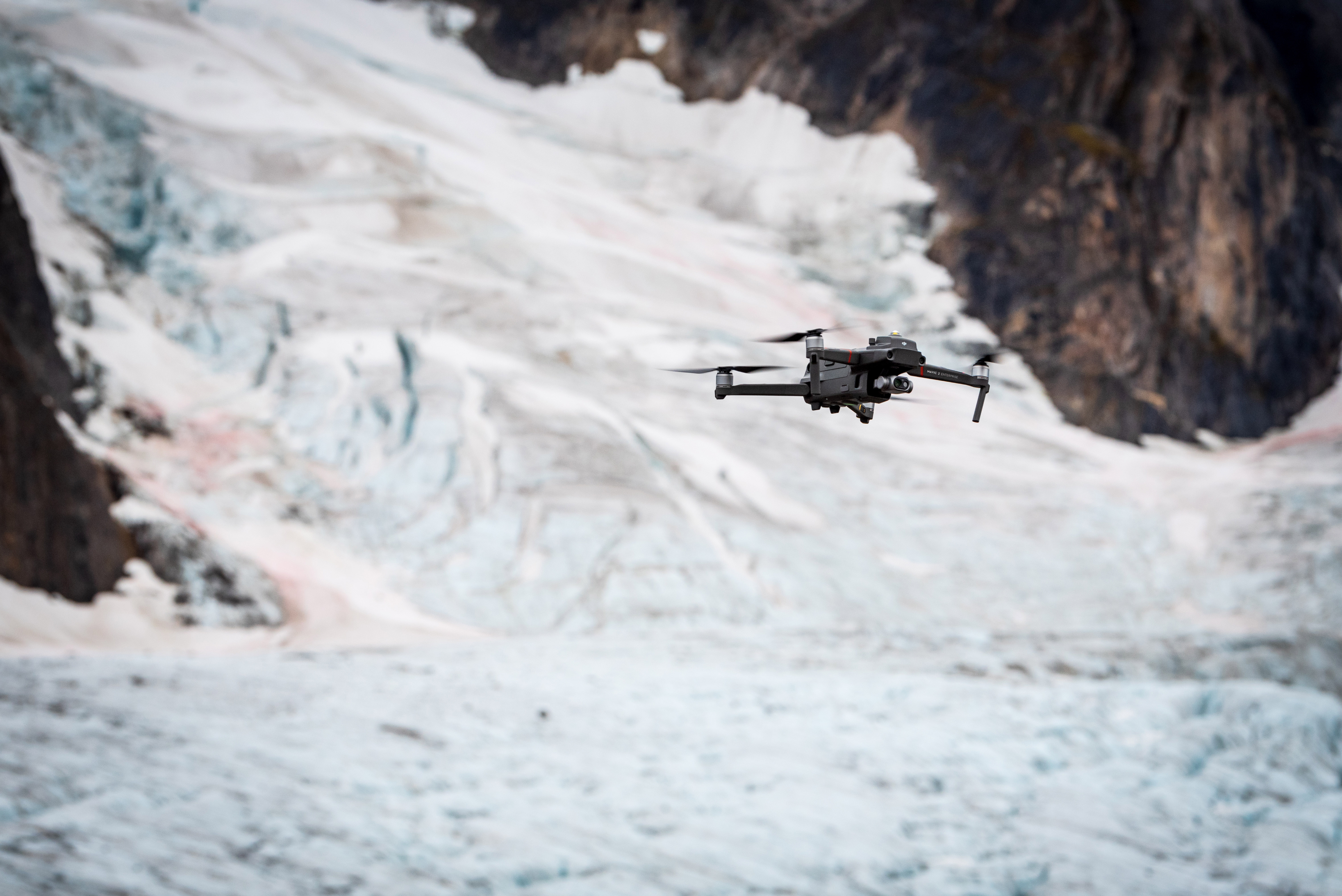 However, overcoming these obstacles offers some interesting opportunities for studying geography and wildlife in wild and remote places like Svalbard. The terrain is difficult to travel over and it takes time and effort to do any kind of serious surveying of a landscape covered by ice and snow.

“A drone gives you fantastic reach and really extends your observations. You can fly over that glacier, get over that ridge, and have a look in areas where you wouldn’t normally be able to see,” Saczuk says.

You need about eight satellites for a drone to properly record data, and depending on the types of sensors available for a drone, you can take photos, record video, gather data for thermal imagery, even detect certain particles in the atmosphere.

One use for drones is multispectral analysis. For example, in polar regions there are now more lichen and mosses growing along coastal areas. In the north, this is referred to as Arctic “greening.” The extent of this low and sparse vegetation can be mapped out through images in the infrared spectrum, which is not visible to the human eye. There is also a lot of potential for wildlife surveys, such as getting a count of a herd of reindeer, and biodiversity studies. Usually, if you want to get an accurate weight or size calculation for an animal, you need a team of biologists to track, tranquilize, and capture the animal. That can be a very complicated, time-consuming, and invasive process.

“With drone technology you could fly the drone in a repeated pattern of overlapping images, which allows you to extract 3D information. Doing a count is essentially automatic because it picks up the hotspots and the software will count them up for you,” Saczuk explains. “You can derive measurements for dozens of animals from a 30-minute flight and get within an 80 to 90 per cent accuracy of what you would get on the ground.”

For the HITI project, Sorby and Strøm are currently working to gather data on the air temperatures over the water in the inlet that they’re staying in. They’re using the drone in conjunction with other citizen science projects, such as sampling the water for phytoplankton concentrations. One of the potential applications of the drone technology would be to compare the samples to drone imagery to extrapolate a count for the whole area. Thermal images could also help provide insight into phytoplankton distribution. 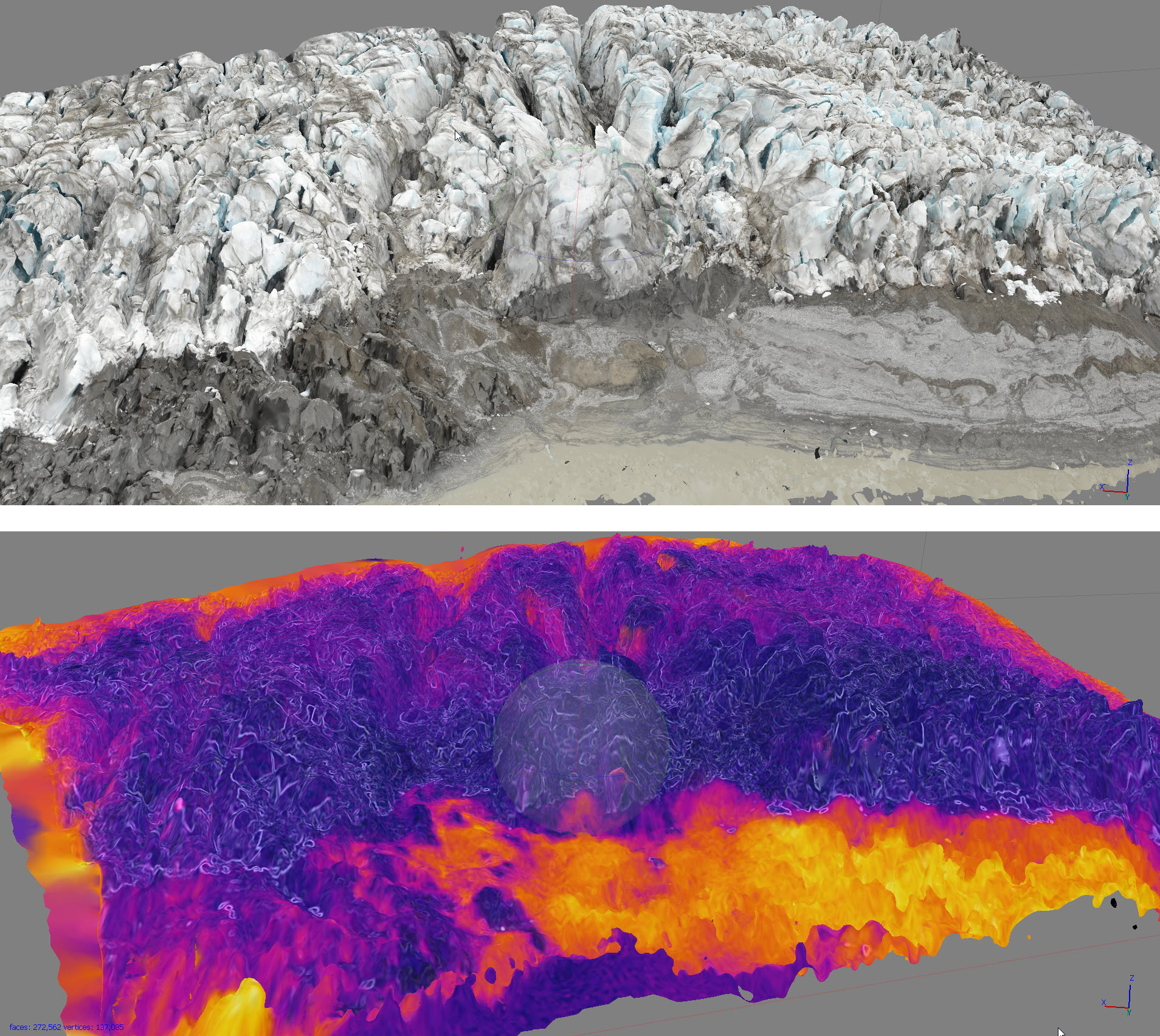 Although it will still be a few months before Saczuk will be able to see the data that Sorby and Strøm are gathering, he already has some idea of what to expect. While testing out the drone equipment in September, Saczuk was able to fly the drone over a glacier and capture exactly the kind of images he was hoping for.

“When you’re mapping things like buildings, there’s a lot of right angles and structure to the images. The software works really well with hard edges,” Saczuk says. “What I was really curious about is whether with a far more organic surface like a glacier, which is more intricately complicated and has a lot of texture and structures like crevasses, there is enough data in these images for the software to do the reconstruction. And it did a fantastic job, way better than I expected.”

On Svalbard, you could use drones to map out glaciers, which cover about 60 per cent of the landmass, and track the effects of climate change. The 3D models produced by the drones could provide an accurate way to measure heights, distances, and volumes to within a few centimetres. The possibilities for drone application in scientific research are endless.

Follow the Hearts in the Ice (HITI) project and learn more by subscribing to the Can Geo Education newsletter, or by following us on Twitter and Facebook. Educators can connect virtually with the HITI team through monthly Google Hangouts via Exploring by the Seat of Your Pants (EBTSOYP). The next Google Hangout, happening on January 14, 2020, is all about weather patterns in the Arctic. Sign up and learn more here.

Check out the video stream about drone technology from the last HITI Google Hangout on the EBTSOYP YouTube channel. To learn about the technology being used for communication between the HITI team and schools in Canada, check out this video.

For other technologies, check out Canadian Geographic Education’s Canada from Space Giant Floor Map or print off the tiled map for your classroom and learn about how satellite technology is used for climate and biodiversity studies.