Eight awesome things that happened at the 2018 RCGS Fellows Dinner

Remembering Louie Kamookak, a new Explorer-in-Residence and other highlights from the 89th Annual College of Fellows Dinner
By Alexandra Pope
November 2, 2018

The vibe was electric as more than 500 people gathered inside the newly-renovated National Arts Centre in Ottawa November 1 to celebrate what will be remembered as a milestone year for The Royal Canadian Geographical Society.

2018 saw the Society move into a historic new headquarters in the political and ceremonial heart of Ottawa on Sussex Drive; complete work on a groundbreaking educational resource in partnership with First Nations, Métis and Inuit organizations; and take part in the recommissioning of the RCGS Resolute, the first vessel to be flagged “Royal Canadian Geographical Ship.” With all that and more going on, it’s no wonder attendance at this year’s College of Fellows Dinner was the highest ever. 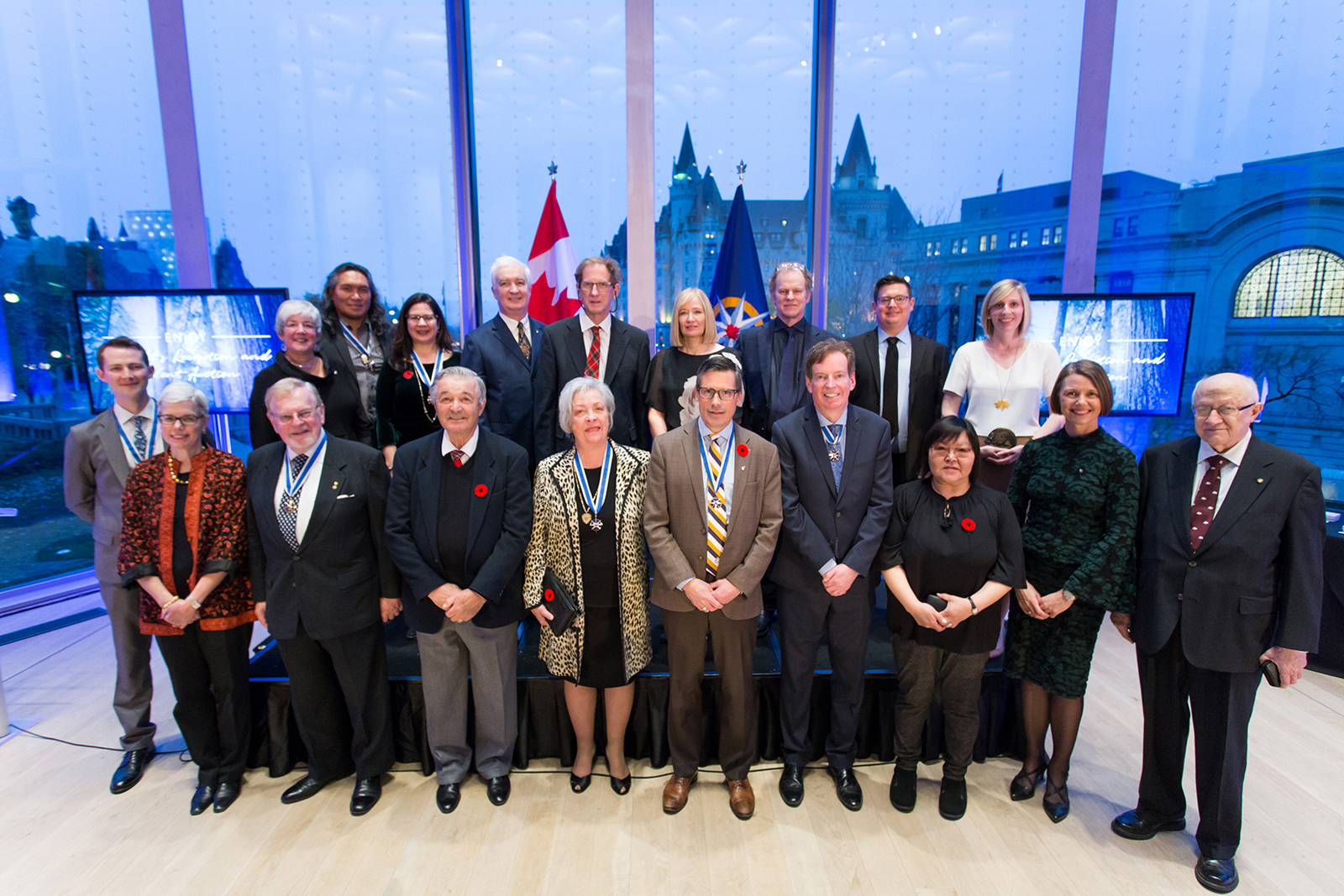 Each year, the RCGS recognizes achievements in geography, exploration and education, as well as outstanding contributions to the Society, through its awards program. This year saw awards presented to a diverse group of individuals that included actors, artists, scientists, teachers and philanthropists. Seventeen awards were presented in a medal ceremony at the outset of the evening, while others received their awards at events earlier in the year. Here is the full list of 2018 award winners: 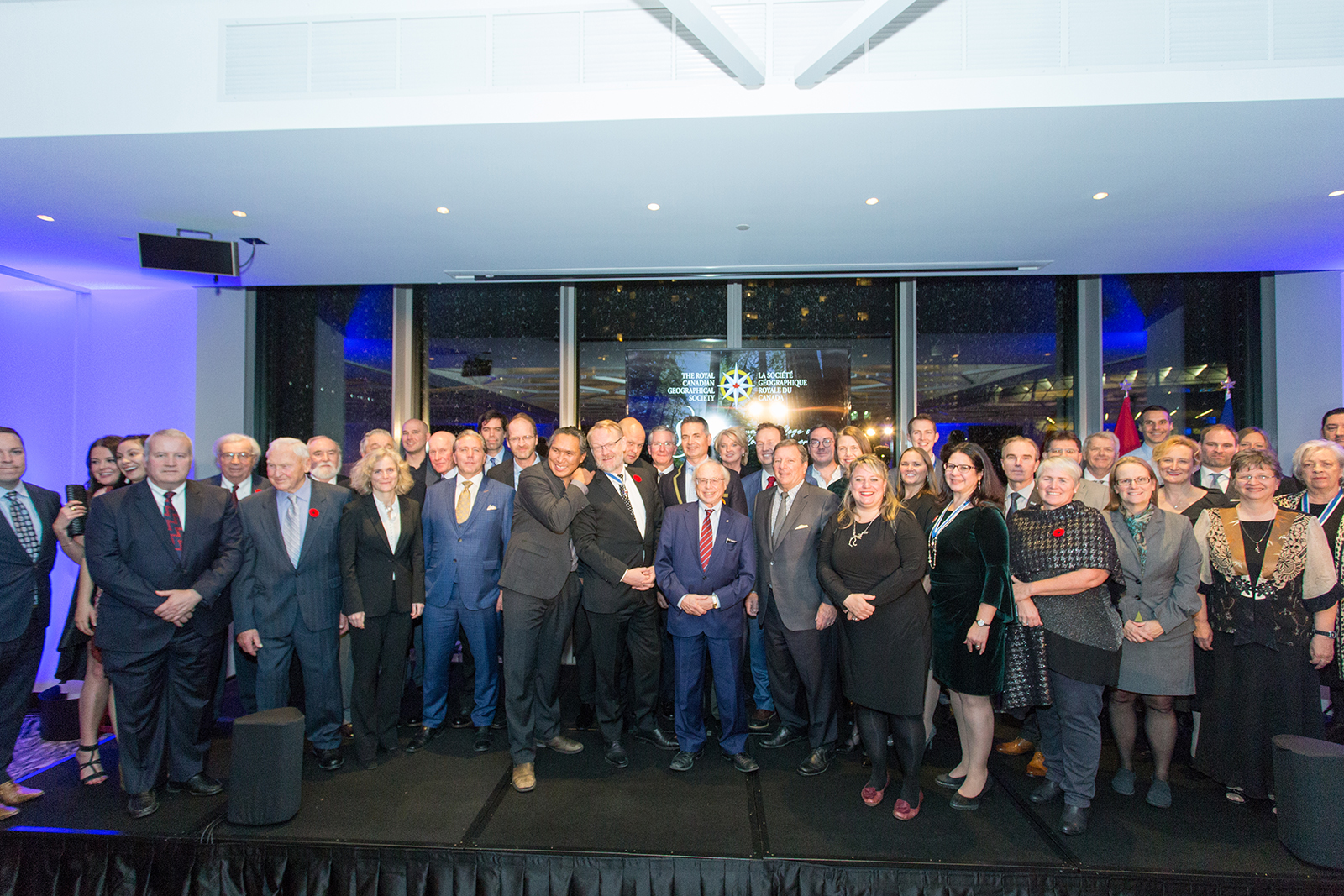 Some of the 85 new Fellows elected to the College of Fellows Nov. 1. (Photo: Ben Powless/Canadian Geographic)

The addition of 85 Fellows in 2018 brings the total number of Fellows to more than 1,000 for the first time in the Society’s history. Among the distinguished individuals joining the ranks this year are former Deputy Prime Minister of Canada John Manley, explorer and writer Jeff Fuchs, documentary filmmaker Brandy Yanchyk, artist David McEown, wildlife photographer Todd Mintz and curator and polar historian Claire Warrior.

In 2018, One Ocean introduced into its fleet the RCGS Resolute, the first vessel ever flagged as a “Royal Canadian Geographical Ship.” She was recently recommissioned at a ceremony in Sydney, Cape Breton and will depart on her inaugural sailing to Antarctica on Nov. 16.

We toasted a legendary explorer

A newly-minted Honourary Vice-President of the Society, Dr. Joe MacInnis deserves to be a household name. He is credited with discovering the remains of the HMS Breadalbane wreck off Beechey Island, and was one of the first people to dive on the Titanic. He has also designed and lived in undersea habitats, but those who have worked with him say his greatest legacy is his mentorship of other explorers.

“I was quite young when I was first inspired by Dr. Joe MacInnis’s pioneering ocean exploration and his obvious love of the wonders of our planet,” said RCGS President Gavin Fitch. “At that point, he was already a great explorer, but his exploits and legendary status have grown in the decades since to the extent that it’s no stretch to class him among the greatest explorers this country has ever produced.”

Another explorer who has been profoundly influenced by MacInnis? Director James Cameron, who paid tribute to his mentor in a video.

We remembered the late Louie Kamookak

This year, the RCGS introduced a new award, the Louie Kamookak Medal, in memory of the Inuit oral historian and Honourary Vice-President of the Society, who passed away in March. The medal recognizes a person, organization or significant deed that has helped make Canada’s geography better known to Canadians and the world. Inaugural recipients include Kamookak’s wife, Josephine, who was “both his partner in life and in his life’s work completing and retelling the stories of the central Arctic,” according to RCGS CEO John Geiger.

A Kamookak Medal was also presented to an individual who helped bring those stories to life for a global audience: actor Jared Harris, who starred in the AMC original series The Terror.

Harris said he’s gratified that the show has persuaded the curious among his fans to check out the true story of the Franklin expedition. “It’s sort of fitting that history will recall that it was the RCGS that first recognized The Terror, and that we as the recipients walked in the footsteps of Louie Kamookak.” 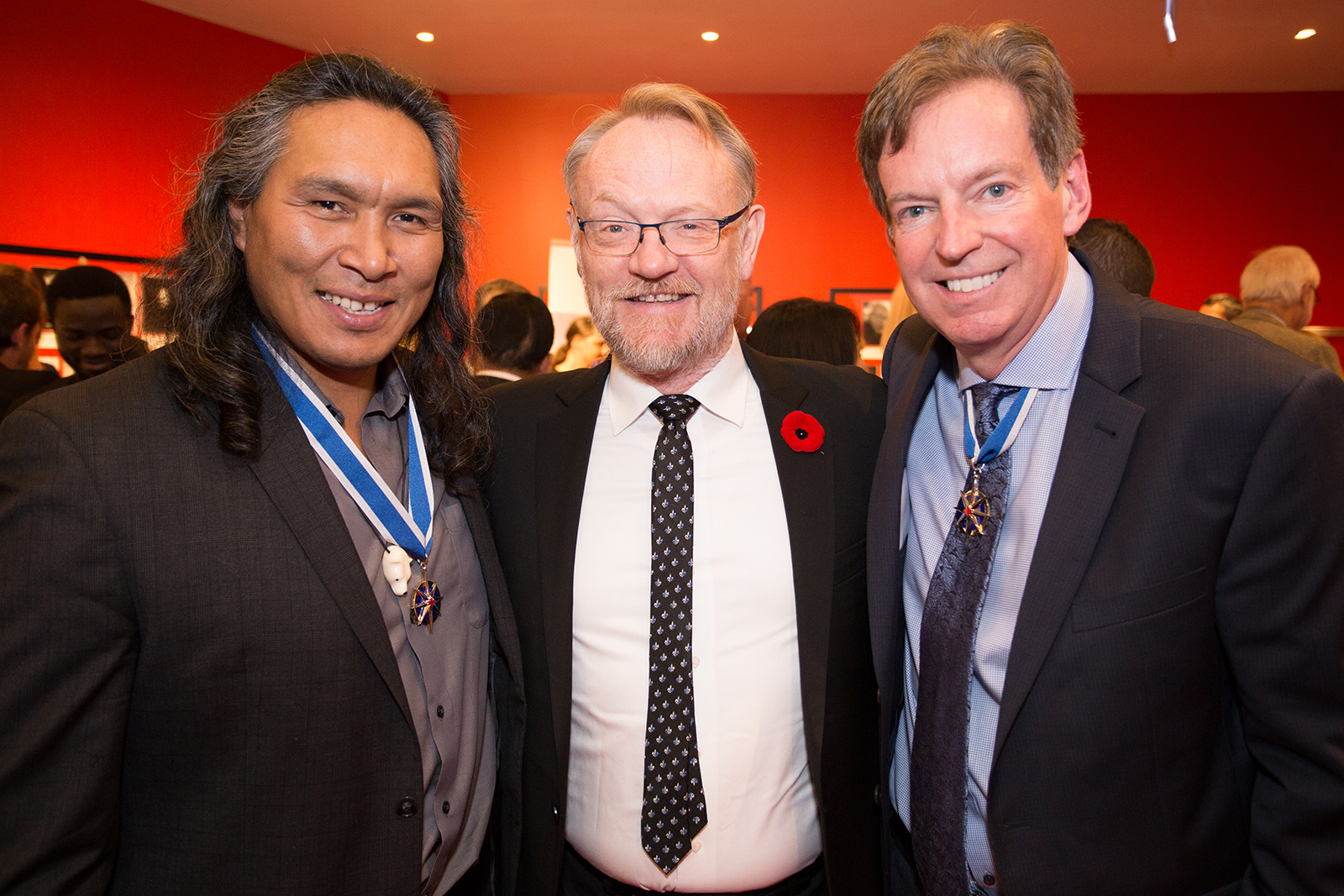 We announced a new Explorer-in-Residence 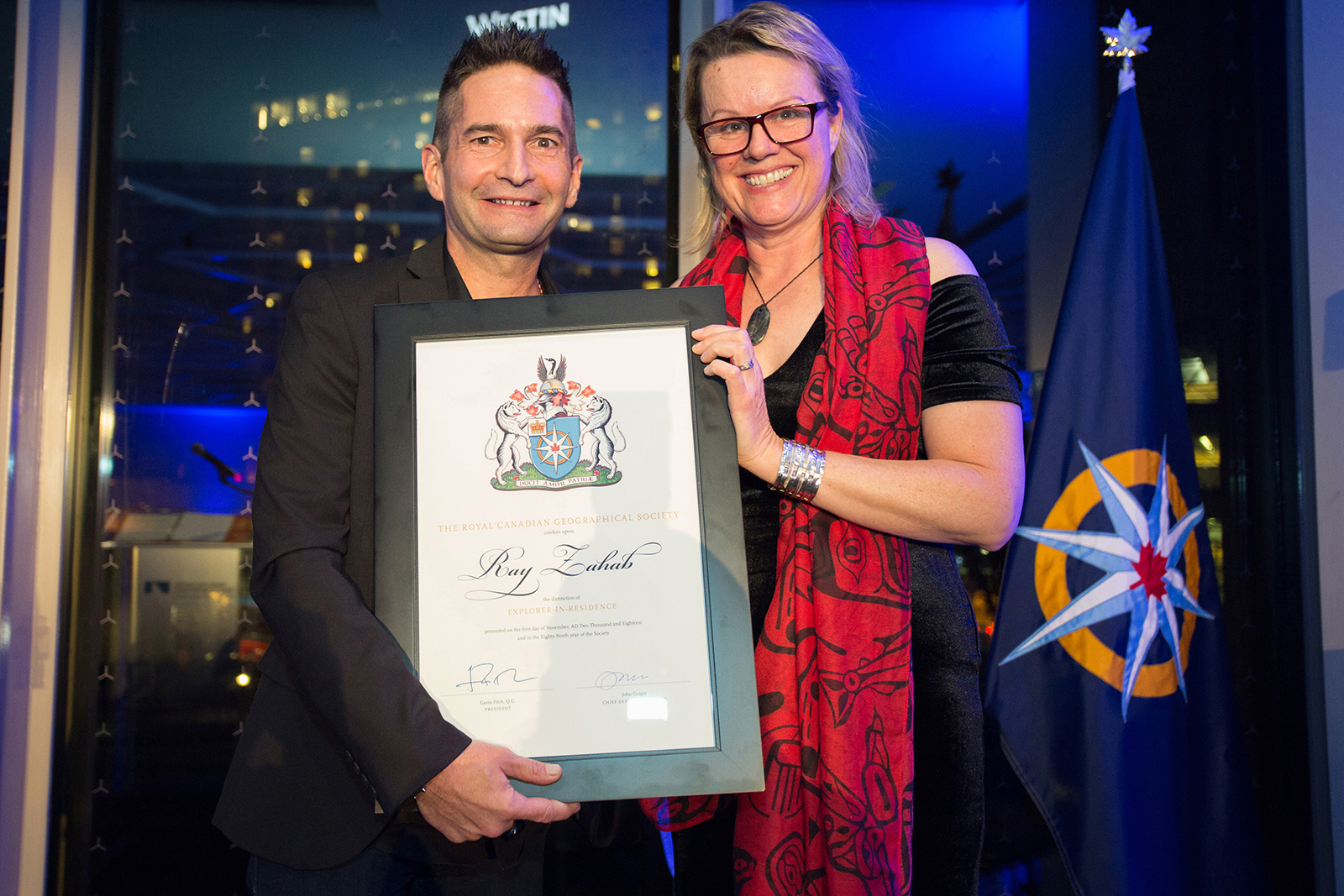 Along with a cave diver, a storm chaser, a trans-Atlantic rower and an Arctic trekker, the RCGS can now count an ultramarathoner among its Explorers-in-Residence. Ray Zahab has run thousands of kilometres across some of the most extreme landscapes on the planet, including the Gobi Desert, California’s Death Valley, and even the Antarctic continent. Through his registered charity, Impossible2Possible, he organizes and funds educational expeditions for young people from around the world.

“Ray has hit on a formula for harnessing the power of exploration and adventure as a way of educating upcoming generations and truly changing lives,” said Explorer-in-Residence Jill Heinerth.

We recognized our partners on the Indigenous Peoples Atlas of Canada

The Indigenous Peoples Atlas of Canada, completed this year, was the most ambitious project the RCGS has ever undertaken — a first-of-its-kind educational resource that explores the stories, histories and perspectives of First Nations, Métis and Inuit in Canada. The leaders of the five Indigenous partner organizations that led the development of the Atlas — Assembly of First Nations National Chief Perry Bellegarde; Métis National Council President Clément Chartier; Inuit Tapiriit Kanatami President Natan Obed; Indspire president and CEO Roberta Jamieson; and director of the National Centre for Truth and Reconciliation, Ry Moran — were each presented with the Society’s Gold Medal, and participated in a panel discussion moderated by David Gray, host of the CBC Radio morning show The Calgary Eyeopener. 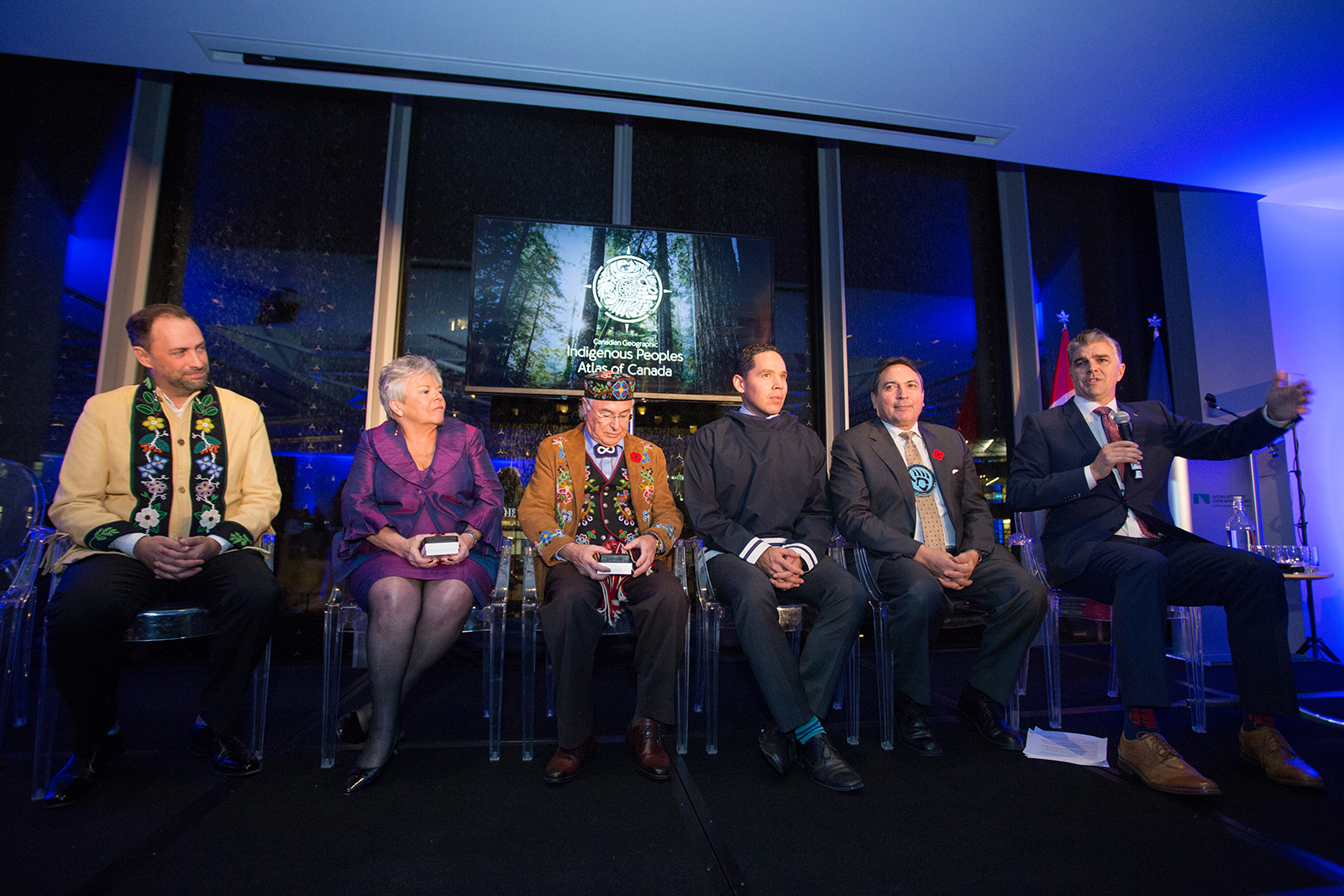 David Gray, far right, host of The Calgary Eyeopener on CBC Radio, hosted a panel discussion on the Indigenous Peoples Atlas of Canada with the leaders of the five organizations that led the development of the resource. Left to right: Ry Moran, Director of the National Centre for Truth and Reconciliation; Roberta Jamieson, President and CEO of Indspire; Clément Chartier, President of the Métis National Council; Natan Obed, President of Inuit Tapiriit Kanatami; and Perry Bellegarde, National Chief of the Assembly of First Nations. (Photo: Ben Powless/Canadian Geographic)

Each of the leaders reflected on the importance of telling the story of Canada through an Indigenous lens.

“I hated geography when I went to school,” said Jamieson. “Like so many of the courses I took, we [First Nations] were not there. This was an opportunity to tell Canadians but also our own people that our relationship to this land is sacred and important.”

Added Moran, “This project represents such a powerful opportunity ... to simply be honest with ourselves as a country. This is the hard work of reconciliation in front of us.”

We looked forward to the future of the Great Trail 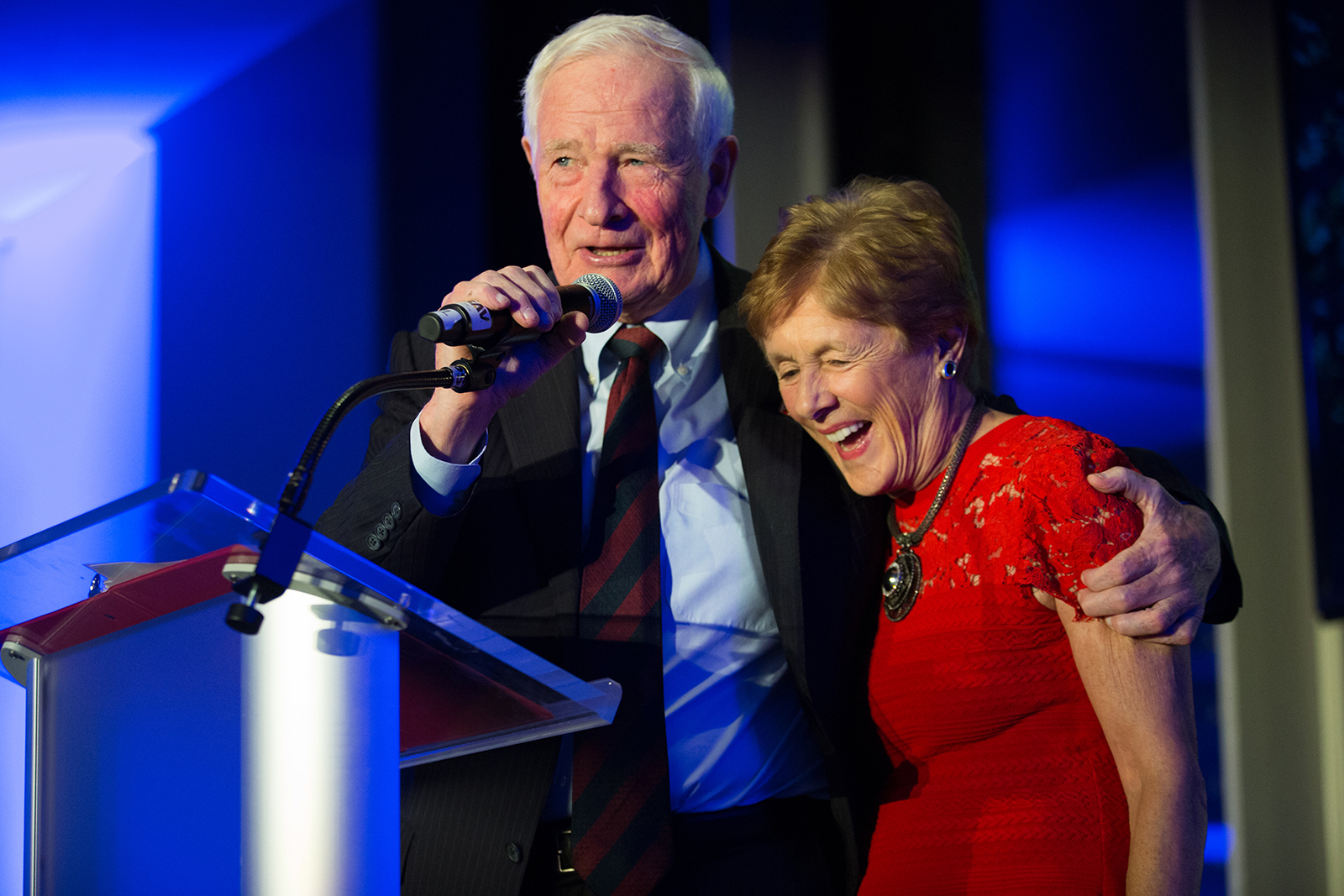 The Right Honourable David Johnston and his wife Sharon shared a laugh while recognizing the achievements of the Trans Canada Trail. (Photo: Ben Powless/Canadian Geographic)

Of course, connected doesn’t mean complete, and work has already begun on making the Trail even better and more accessible.

“Being part of this legacy project has been such an honour and truly gives meaning to our lives,” said Pringle. “We will continue to encourage Canadians and visitors to explore this country ... and enjoy and use this gift — this Great Trail.”