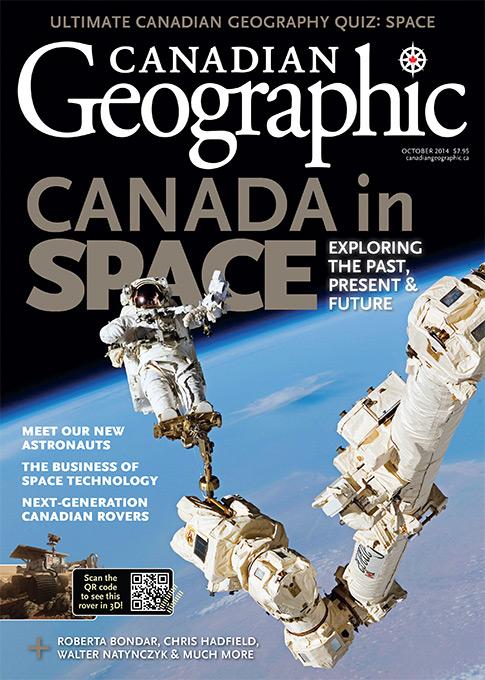 How to train your astronaut
From extreme isolation and psychological strain to operating high-tech robotics and undergoing an intense physical fitness regimen, here’s a glimpse of what it takes to head to space
Online Exclusive: Astronaut health issues: The health issues astronauts face as they journey beyond the Earth’s surface

The business of space
How a unique partnership between a public agency and private industry is changing space exploration
Online Exclusive: Canada's role in space technology: How Canadian space technology is finding a home on Earth

Touching the Earth
You most likely know Roberta Bondar as the first Canadian woman in space. After returning from her 1992 mission, she was inspired to connect land and space through photography. Here she shares the inspiration for her work and two of her favourite images.
Online Exclusive: Roberta Bondar photos: Check out Roberta Bondar’s landscape and environment photography (robertabondar.com)

Canada in the cosmos: the next 50 years
Four Canadian space experts discuss what’s next. A panel discussion featuring Melissa Battler, Wayne Ellis, Chris Gainor and Bryan Versteeg.
Online Exclusives:
• The future of Canada in the cosmos: A panel of space experts discuss concerns about the militarization of space and Canada’s role in future space missions
• Three CSA astronauts’ spouses share what their lives are like: Catherine Hansen, Brenda Biasutti and Nadine Wielgopolski

Infographic
Exploring the International Space Station
Online Exclusive: Images from the Hubble telescope: A closer look at the beautiful space images captured by the Hubble Telescope

History
An early chart of the night sky and a look back at Canada 100 years ago
Online Exclusives:
• Animals in the First World War: How horses and other animals helped soldiers during the First World War
• View the Delta Aquarids meteor shower: A video of the spectacular show in the sky