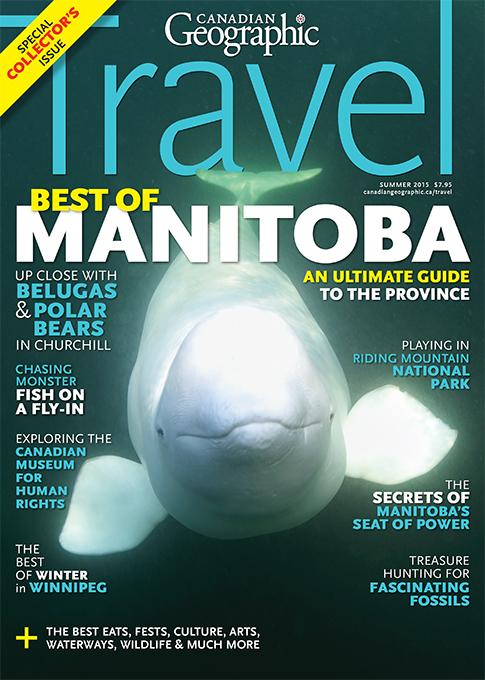 A tale of two seasons
Churchill is world-renowned for its beluga whales and polar bears, and visitors can enjoy wildly different experiences with the creatures in summer and fall.
Online Exclusives:
Read more about dogsledding in the summer
Photo tour of the town of Churchill, Manitoba

Remote. Unspoiled. Serene. And the promise of big fish.
A taste of Manitoba’s world-class fly-in fishing experience
Online Exclusive: Read an interview about what it's like to manage a back-country lodge in Manitoba

Red River monsters
Chasing the continent’s biggest and best channel catfish a stone’s throw from Winnipeg
Online Exclusive: Video about the art of angling for catfish

Winnipeg rules!
Three tributes — from an outsider, a former resident and a life-long Winnipegger — to Manitoba’s capital

Meet Bruce
... The world’s largest mosasaur, discovered in what was once an ancient inland sea, where hundreds more like it may be buried
Online Exclusive: Infographic of 10 amazing Manitoba fossil facts

First Nations and Métis: A storied heritage
Online Exclusive: Get the bannock recipe from a longstanding aboriginal restaurant

Stage stars
Online Exclusive: Get an inside look at life in the Royal Winnipeg Ballet

The wild side
Online Exclusive: Learn more about the red-sided garter snakes that make their home in the Narcisse snake pits

ONE CITY
Thompson, Manitoba
Embark on a fly-in fishing adventure, trek a wolf-themed path rich in northern heritage and learn about the world’s largest aerospace facility for cold-weather testing in Thompson
Online Exclusive: Find out how a Thompson volunteer group is trying to turn the city into the official "wolf capital of the world."