Plus: Racing to find a vaccine for chronic wasting disease, narwhal “flukeprints” and tool-using polar bears
By Can Geo Staff
August 25, 2021

Put down the soap!

A persistent social media trend of creating large bubble baths by pouring liquid soap into waterfalls is drawing fresh criticism for harming aquatic ecosystems. After finding multiple empty bottles of dish soap and two dead endangered American eels at a local plunge pool, Nova Scotia-based conservation advocate Adam Malcolm took to Facebook to warn of the stunt’s unseen damage. Detergents — even those marked biodegradable — destroy a fish’s outer mucus layer, which protects it from infection. “Detergent can also severely damage gills and destroy eggs,” says Malcolm. What’s more, the trend might actually be illegal: Under Nova Scotia’s Environment Act, “knowingly releasing or permitting the release into the environment of a substance in an amount, concentration or level or at a rate of release that causes or may cause an adverse effect” can carry two years’ imprisonment and a fine up to $1 million. So consider the potential cost before you go chasing that social media clout! 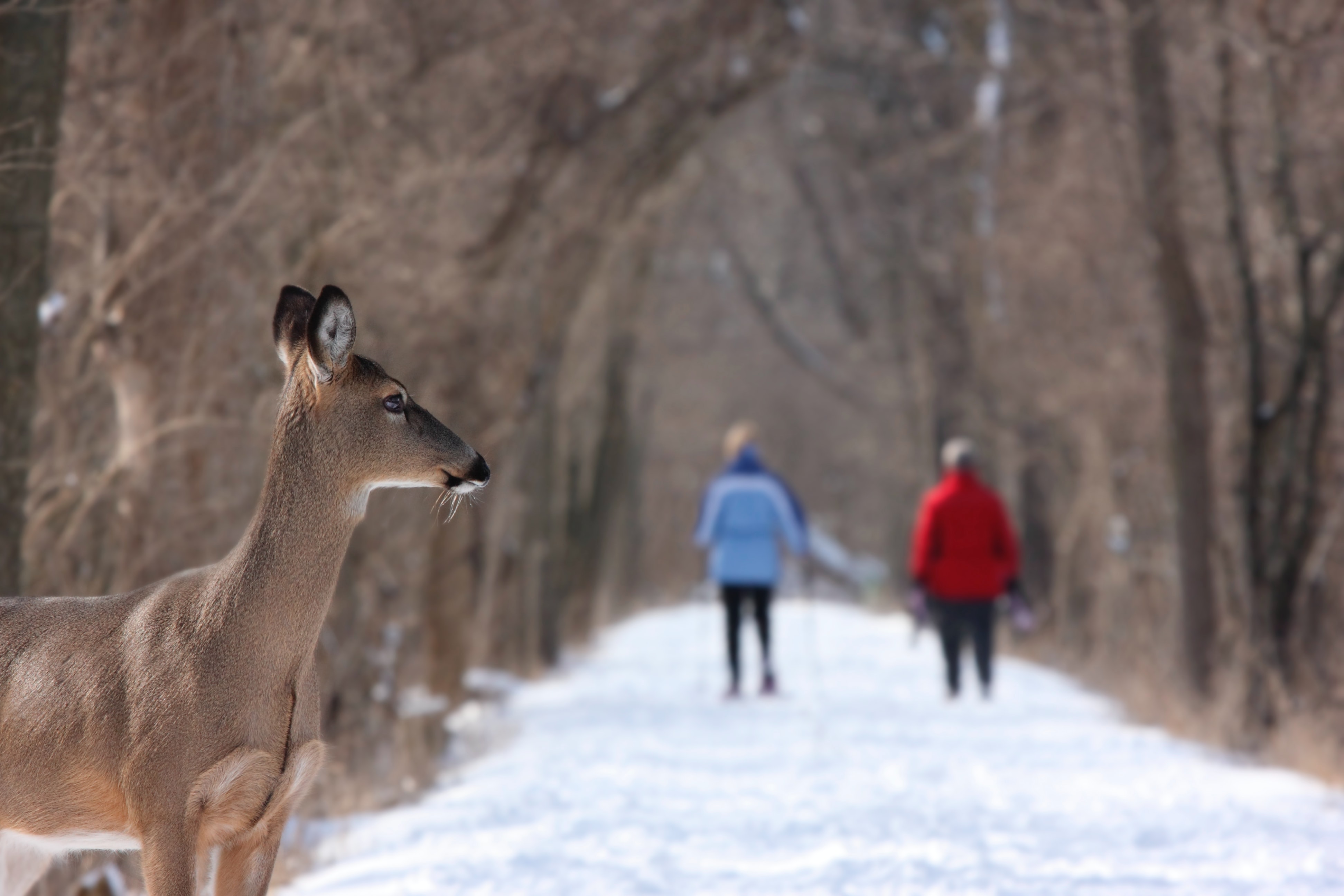 University of Calgary scientists are working on a vaccine against chronic wasting disease (CWD) — an infectious and deadly prion disease of ungulates such as deer and elk — that may have the potential to jump to humans. Currently infecting and killing deer in Alberta and Saskatchewan, the disease is rapidly spreading north and west, putting endangered woodland caribou and other ungulates at greater risk — and cases are skyrocketing. The last year saw as many new cases in one hunting season as in the previous 15 years altogether, according to U of C’s Dr. Sabine Gilch. The boom in CWD cases comes alongside new research indicating that CWD can be transmitted to macaque monkeys — currently the best model for testing the zoonotic potential of prions (a.k.a. their ability to jump from non-human animals to humans). With this in mind, finding a CWD vaccine for deer is more urgent than ever. Prion diseases occur when normal prion proteins, found on the surface of many cells, become abnormal and clump in the brain, causing brain damage. The result is generally fatal. Zoonotic prions are not a new occurrence — the best-known is bovine spongiform encephalopathy, or mad cow disease. Fortunately, the researchers say the vaccine development is going well. Although it won’t completely prevent the disease, it will delay onset — significant in slowing down CWD’s rapid spread. 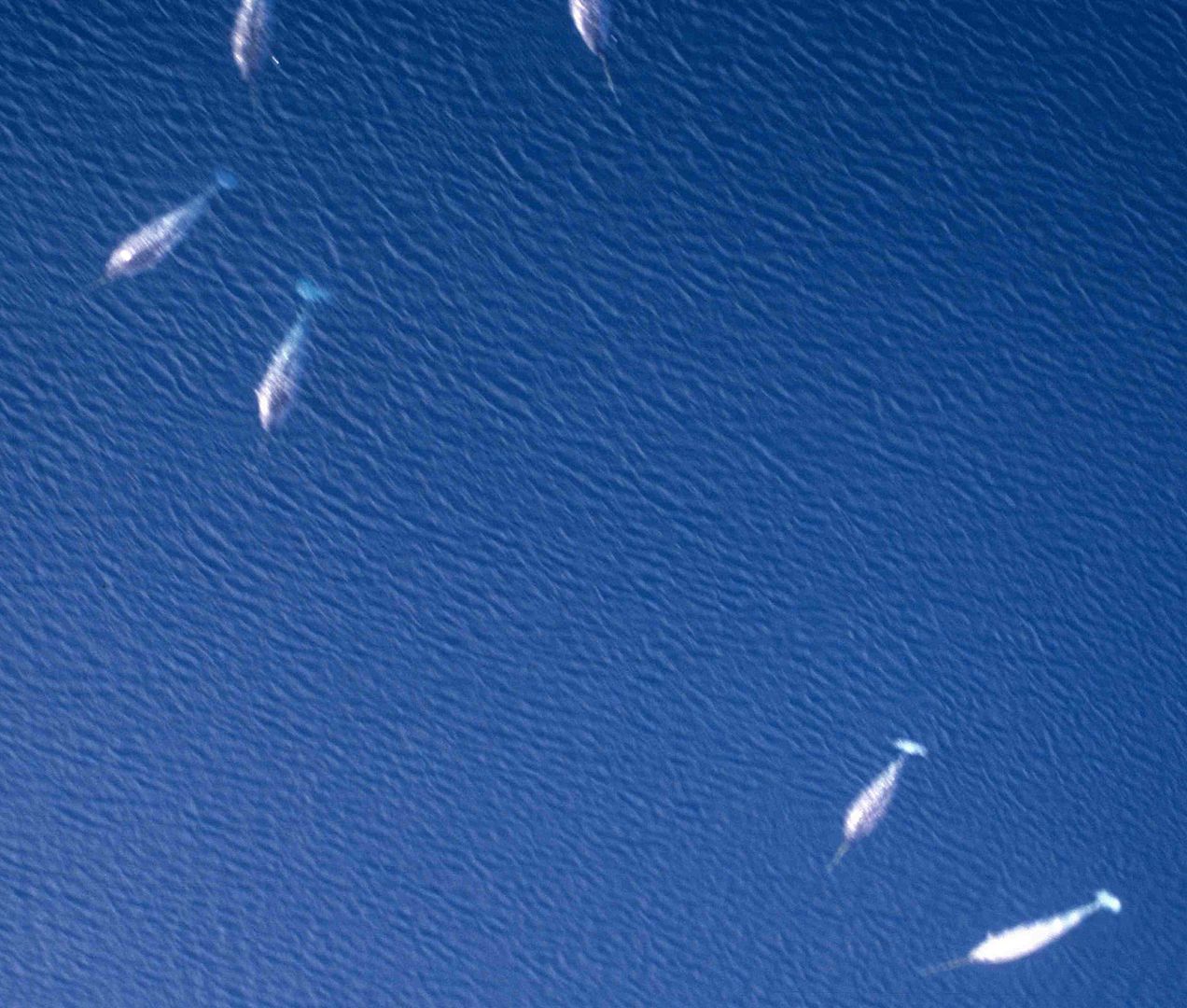 They were flying over Ellesmere Island, Nunavut, using an infrared video camera to look for walruses, seals and polar bears sitting out on the ice off the coast. But when they looked at the footage, the researchers discovered something completely unexpected: narwhals. The surprise find led to a newly published study on — you guessed it — using infrared cameras to detect narwhals. Infrared technology, which detects and visualizes heat, has limited ability to penetrate water. But though the aerial footage did not show a clear outline of the narwhals’ bodies as they swam below, it did show their “flukeprints,” the patches of calm water on the surface of the ocean formed by the passing of a whale. The movement of the water creates upwellings of different water temperatures — hence the colourful infrared images showing not only where the whales were, but also the direction they were headed. The study, by UBC’s Institute for the Oceans and Fisheries, the University of Manitoba and Fisheries and Oceans Canada, was published in the journal Ecosphere.

“Bear killing walrus,” an 1865 engraving by explorer Charles Francis Hall, appearing in his book Arctic researches and life among the Esquimaux being the narrative of an expedition in search of Sir John Franklin in the years 1860, 1861, and 1862 (Illustration: Charles Francis Hall)

Polar bears aren't just powerful hunters through sheer force; recent research confirms they also use tools to kill walruses, striking them over the head with pieces of ice, or hurling rocks at them. It's something that Inuit hunters have known and reported for hundreds of years — and indeed, the researchers who authored the study in the journal Arctic worked closely with Inuit, drawing on traditional ecological knowledge as well as documentation by Inuit hunters and scientists. In 1865, explorer Charles Francis Hall made an engraving showing what his Inuk guide told him: “In August, every fine day, the walrus makes his way to the shore, draws his huge body up on the rocks, and basks in the sun. If this happen [sic] near the base of a cliff, the ever-watchful bear takes advantage of the circumstance to attack this formidable game in this way: The bear mounts the cliff, and throws down upon the animal’s head a large rock, calculating the distance and the curve with astonishing accuracy, and thus crushing the thick, bullet-proof skull. If the walrus is not instantly killed—simply stunned—the bear rushes down to the walrus, seizes the rock, and hammers away at the head till the skull is broken.”

The historical and modern evidence was corroborated by observations of polar bears in captivity, showing that the bears are capable of using tools to access food sources. The researchers, led by Ian Stirling of the University of Alberta, suggest that this hunting behaviour is infrequent and limited to walruses because of their size, difficulty to kill and the possession of their own weapons (their tusks).