Your weekly CanGeo round-up of wildlife news
By Can Geo Staff
June 30, 2021

Rub-a-dub-dub: more chance of a cub 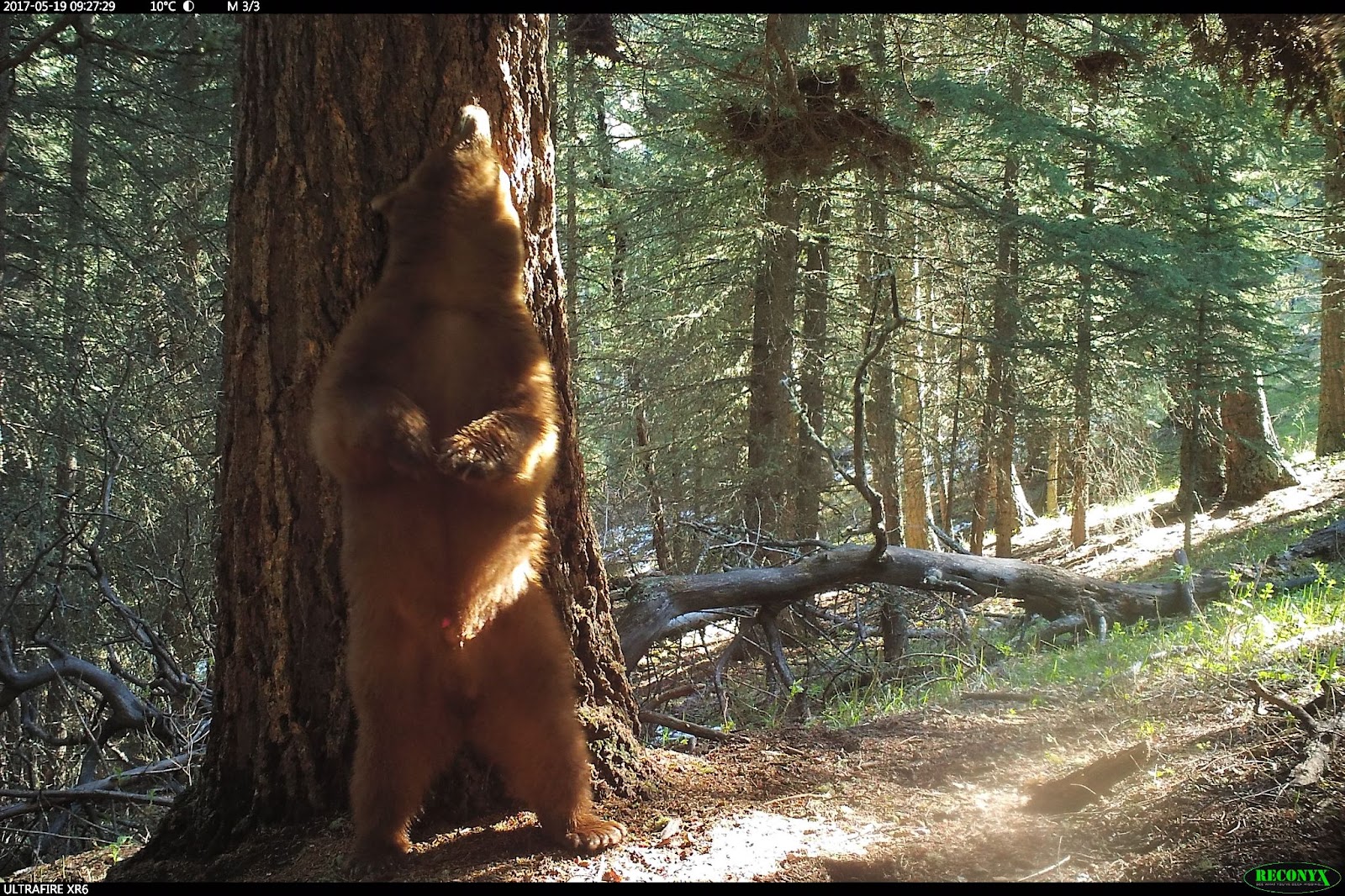 A bear really puts its back into it on a rub tree in southwest Alberta. (Photo courtesy of Michael Jokinen)

Brown bears will often travel miles to find a special rubbing tree. Once they’ve found it, they stand on their hind legs, back to the bark, and go to town. While scientists had assumed that the grizzly pole dance was meant to scratch an itch, researchers from the University of Alberta think it might also be a way of communicating with bears of the oppositive sex. Over four years researchers took brown bear hair samples from 899 trees, power poles and fence posts in and around Waterton Lakes National Parks, Southwestern Alberta. By matching the hair samples to genetic data, they found that bears who rub more frequently have more mates and more offspring. This is because rubbing leaves behind a strong scent — and can communicate dominance to bears of the same sex, and virality to bears of the opposite sex. The technique works for both male and female bears. Male bears rub to stake out territory and their scent also might say a lot about their genetics and fitness — important intel for the choosy female brown bear, who rubs to draw in multiple male partners. This is because female bears are polygamous breeders, meaning they like to have many mates and can actually birth litters of cubs with different fathers. This technique confuses males about the paternity of the cubs and makes them less likely to kill cubs that are not their own. The researchers plan to continue studying the role of rubbing in bear reproduction, and are especially interested in how rubbing — and the information it imparts — is used by female brown bears when they select a mate. 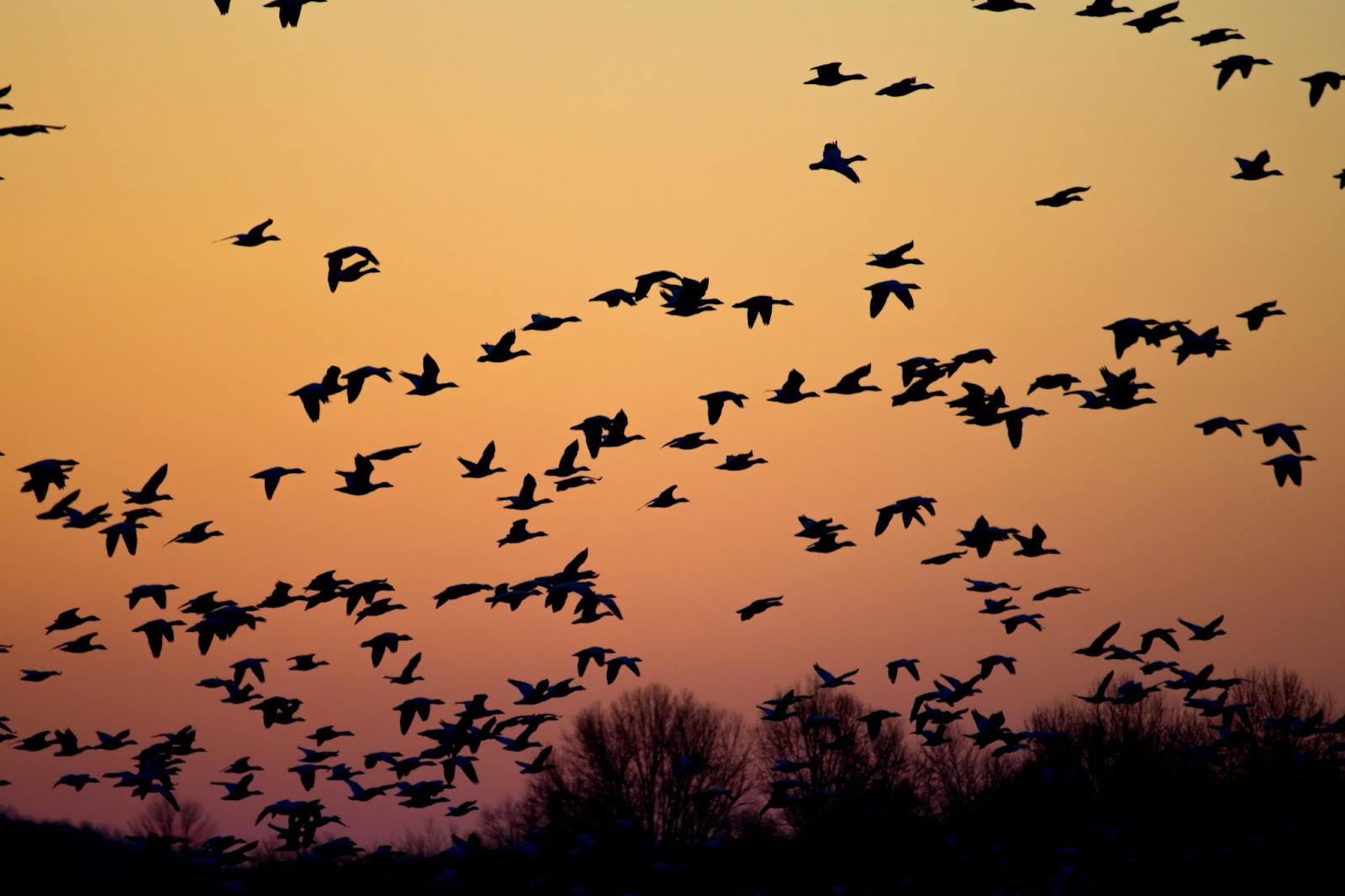 A University of Michigan-led research team announced last year that North America’s migratory birds have been decreasing in body size and increasing in wingspan over the past 40 years. Scientists have been aflutter with speculation ever since — what was causing this? One theory stuck: the changes were the result of the evolutionary pressure to reach spring breeding grounds earlier — and longer wings mean faster flight — a pressure that has its roots in the planet’s changing climate.

In a new University of Michigan study, published in the Journal of Animal Biology, researchers set out to confirm if a link existed between the earlier migration and changes in bird morphology. Using 70,000 bird specimens from 52 species collected between 1978 and 2016, the researchers estimated trends in body shape and size, as well as changes in the timing of migration, over time (the specimens had been collected by the Field Museum in Chicago after building collisions). But they were surprised to find there was no link. Although both the migration habits and body shapes were changing, the changes were happening independently.

So, what is driving the earlier migration? Speculation continues, with theories including shorter, less frequent, stopovers during migration being a factor. For now, eagled-eyed researchers will remain on the lookout for further evidence.

Bat out of hell 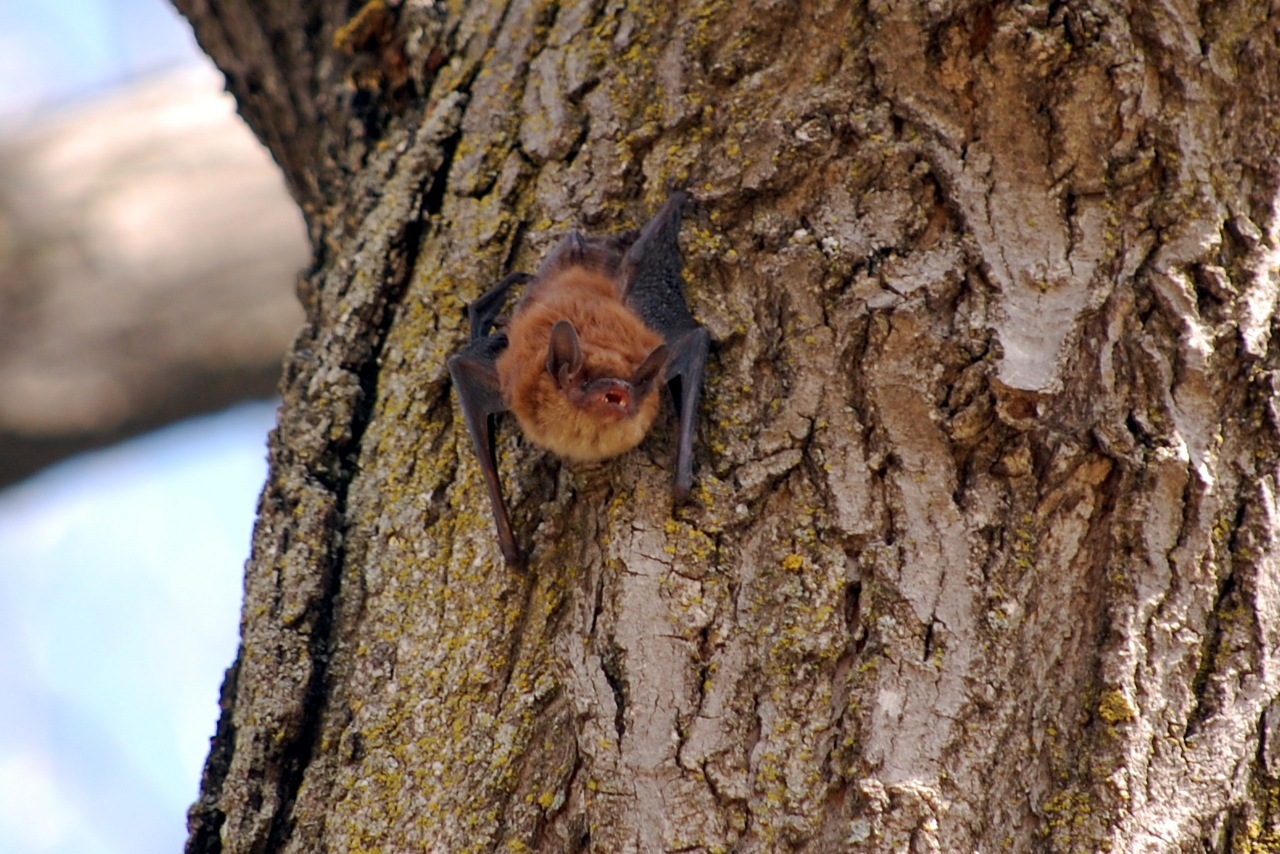 Nova Scotia’s bats are seeing a cautious rebound this summer. Once about 200,000 strong in the mid-1990s, Atlantic Canada’s hibernating bat populations have dwindled to roughly 10,000 due to habitat loss and white-nose syndrome — an invasive fungal disease that has put the tricoloured bat, little brown myotis and northern myotis on the federal species at risk registry. Bats are indispensable to local ecosystems thanks to their consumption of about 60 metric tons of insects per year. These nocturnal creatures are having their summer, however: the Mersey Tobeatic Research Institute (MTRI) has observed twice the regular number of bats in May and June in the province’s southwest, a figure usually only attained by birthing season in July. While the population boost is, as yet, unattributed to any single factor, researchers think that community education and research into bat box shelters by federal institutions and Acadia university students have hastened the bats’ great return! 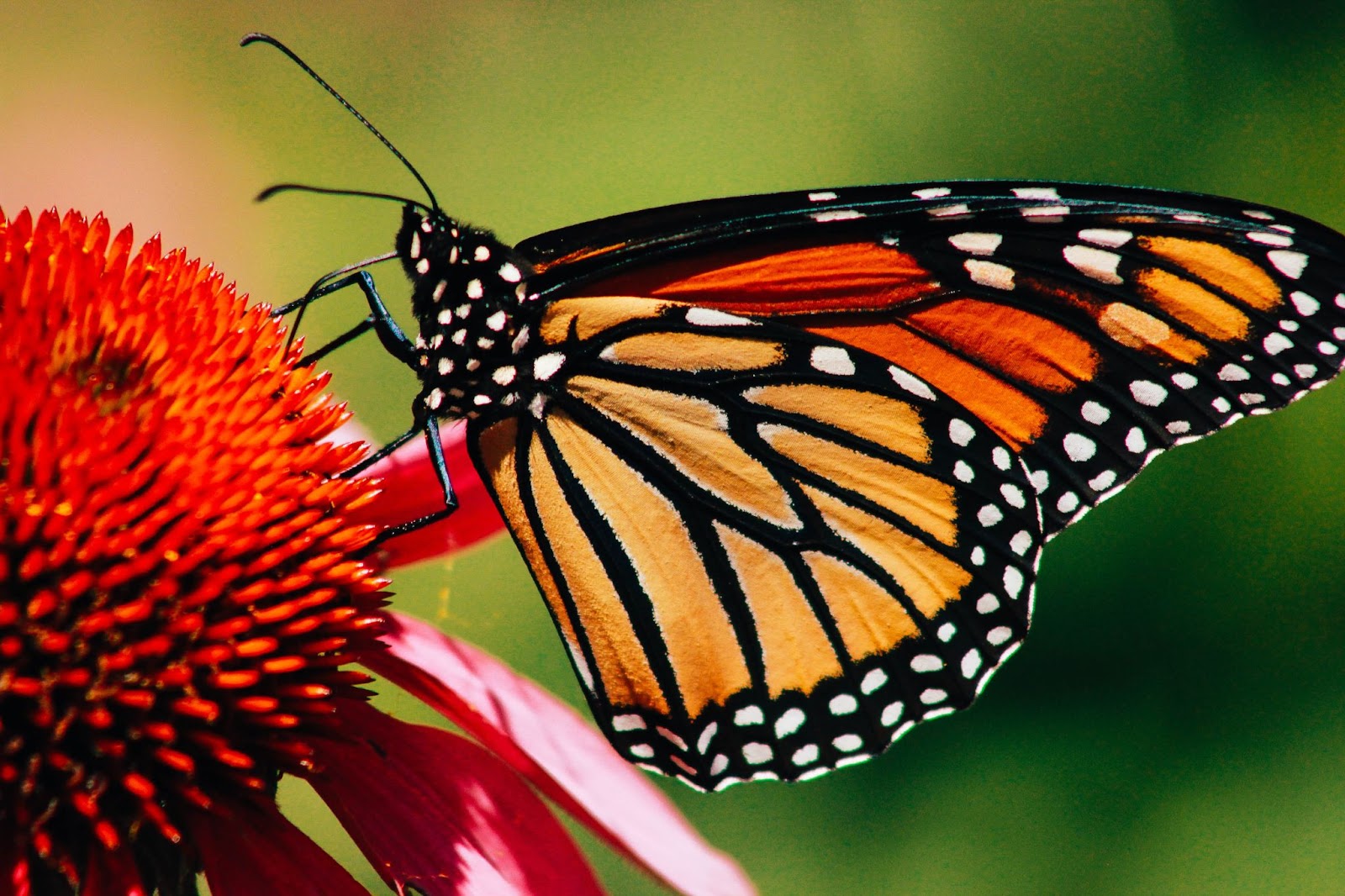 Let the movement take flight! The David Suzuki Foundation celebrated Pollinator Week (June 21-27) with record participation in its Butterflyway BioBlitz, an inspirational week of educational programming that saw 800 students from 52 schools across B.C. fan out to record information about local wild pollinator populations. On a wider scale, the Foundation’s Butterflyway Rangers program saw 1,000 residents from across Canada volunteering to be rangers this summer, planting hundreds of native wildflowers in yards, gardens, schools and parks to create butterfly-friendly corridors in their communities. These linked gardens are super-highways of black-eyed Susans and beebalms, milkweeds and coneflowers — flowers that provide food and shelter to embattled Monarchs, as well as other essential pollinators (the birds, bees and other butterflies). Find out how you can get involved in the Foundation’s Butterflyway citizen science projects here.

Canada’s most endangered mammal is not a bear. It’s not caribou, either. It’s the Vancouver Island marmot — and there’s some good news for the species, one of just a few mammals endemic to Canada. The Toronto Zoo has announced the birth of six Vancouver Island marmot pups — part of a conservation breeding program that the zoo has contributed to since 1997.  The first baby squeaks were heard from parents Oban and Frances’ nest box in April and, the very next month, from parents Mayne and Laura Beth’s box. While keepers didn’t open the nest boxes for three to four weeks — in order to minimize disturbance to the possible new parents — the zoo has now confirmed that Oban and Frances have five pups, while Mayne and Laura Beth have one pup. Now two months old, the pups have started to explore their indoor and outdoor enclosures. The Vancouver Island marmot, the largest member of the squirrel family, is one of the rarest mammals in the world — in 2004, the wild population numbered as low as 30 individuals. It’s thanks to recovery programs like this that the population has bounced back to an estimated 200 to 300. Toronto Zoo has released about 140 animals back into the wild since the program started. Research is ongoing to help protect the marmots’ natural habitat and to answer our remaining questions about the furry endemics.