Why won't wolverines cross the road?

In shedding light on wolverines' aversion to roads, new research suggests the key to their conservation in Alberta
By Justina Ray
February 14, 2018

The sight of a road can strike fear into the heart of one of Canada's toughest predators, according to new research on wolverines in Alberta.

Wolverine biologist Matt Scrafford spent three winters capturing a number of these wily predators in northern Alberta. The wolverines were then fitted with GPS collars and tracked across an area of the province crisscrossed with logging and oil and gas service roads.

Scrafford, who joined Wildlife Conservation Society (WCS) Canada in 2017, had a strong hunch that the wolverines would do their best to stay away from the roads, but he sought to create a more detailed picture of how wolverines react to roads. He and his team tracked not only where the wolverines went in their Alberta forest habitat, but also how they behaved in different parts of their extensive territories. To do that, they used the GPS tracking to also calculate how quickly wolverines were moving and how much time they spent in specific areas, especially near roads.

Wolverines require very large areas of habitat to scavenge, hunt, and raise young. When an area has a high density of resource access roads (i.e. for oil and gas exploration, forestry and mining), it becomes risky for wolverines to travel and makes it difficult for the animals to find large, intact areas where the risk is lower. Further, roads can also increase the time it takes a wolverine to navigate through its territory if the animal is inclined to avoid roads.

Scrafford’s research, published this month in Behavioral Ecology, indicates that wolverines both avoid roads and, when in the vicinity of roads, move quickly to reduce the time spent near them. Their actions suggest that they perceive roads and surrounding areas to be high-risk areas. Wolverines are not unique in their apprehensions about roads, but different species react differently when encountering roads. For example, some pause and assess, some speed across or away, and others simply avoid roads altogether. Wolverines, Scrafford found, tended to avoid roads, but also picked up the pace when in the vicinity of roads, making them “speeders and avoiders.”

But Scrafford also wanted to know if behavior changed depending on the type of road. To do this, he had to quantify traffic levels on everything from lightly used resource roads to busy highways. Fixed cameras left in place over a period of time were used to calculate traffic levels on backcountry roads in the study area, while provincial data was used to estimate traffic flow on a busier highway running through the area.

Not surprisingly, Scrafford’s team found that wolverines spent as little time as possible near busy roads. But, interestingly, they found that wolverines also had a strong tendency to avoid even lightly used roads. This behaviour may be linked to a fear of being exposed to predators while crossing resource roads — particularly wolves, which may use the roads to hunt. This fear might not be unjustified: during his fieldwork, Scrafford found three male wolverines killed by wolves near winter roads. 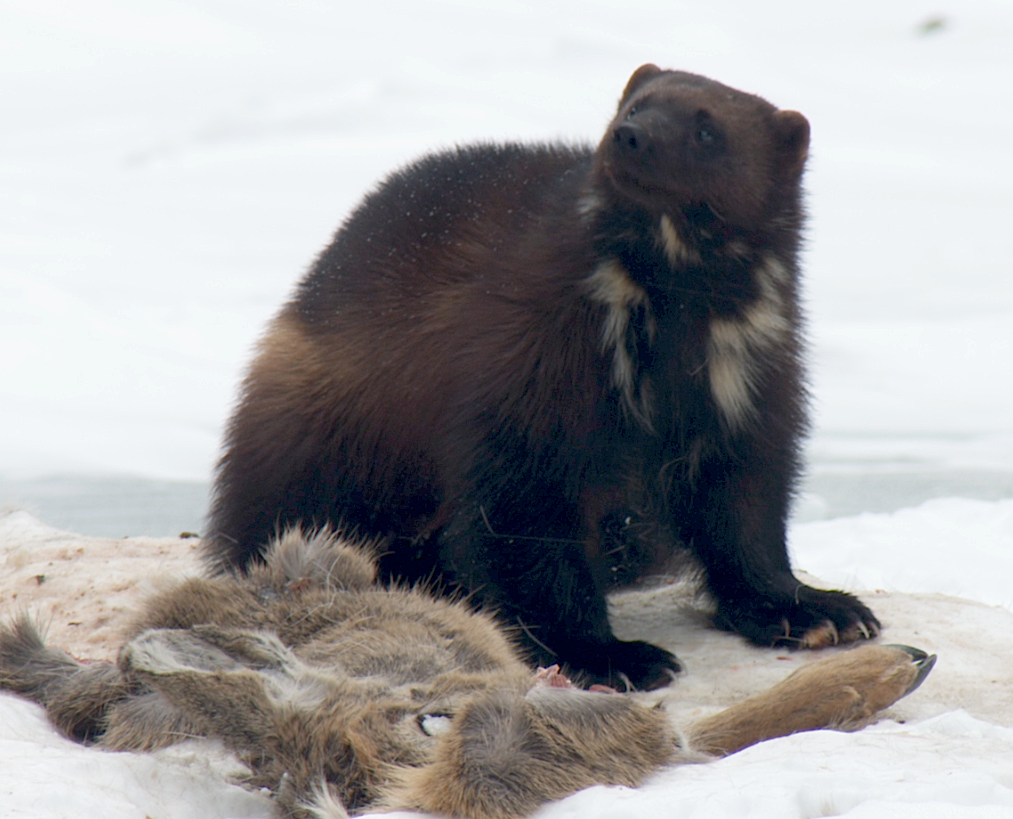 Wolverines may avoid roads out of fear of being exposed to predators, especially wolves. (Photo: Andrew Manske)

This work on wolverines has strong parallels with research on grizzly bears in British Columbia carried out by WCS Canada research fellow Clayton Lamb. Lamb’s research found that grizzly bear density was lower in areas with higher road densities. The low population density near roads is due to both direct bear mortality near roads and bears avoiding habitats near roads. In fact, grizzly populations were three times higher in areas with few roads, and populations increased by close to a third in areas where roads had been closed to general public use. Where Lamb’s research quantified the effects of roads on grizzly bear population density, Scrafford’s wolverine research looked at behavior and what it suggested about the displacement and mortality threat roads pose to wolverines.

These findings led both researchers to a similar set of recommendations. The first and foremost is to limit road building as much as possible in high quality habitat areas for wolverines and grizzly bears. The second is to reduce the overall road footprint by “clustering” roads in an area as much as possible, especially high traffic routes. Finally, Scrafford and Lamb note that roads that do run through key habitat areas must be carefully managed. Public access to backcountry roads, for example, should be restricted when wolverines are denning. Similarly, disused roads should be decommissioned to reduce stress and mortality for wildlife.

Wolverines are listed as a Species of Special Concern in Canada and may be at risk in Alberta, though due to the elusive nature of the animal, precise population data is lacking. Still, unchecked road building in the forests predators depend on is a key factor in the disappearance of these and other iconic animals. If we want wolverines (and grizzlies) to thrive in our wild areas, we need to put up a stop sign on indiscriminate road building.

Justina Ray is the President and Senior Scientist at WCS Canada. She is involved in research and policy activities associated with conservation planning in northern landscapes, with a particular focus on wolverine and caribou.