Why we spilled oil for science

As the federal government considers the fate of proposed pipelines, a unique science experiment aims to understand the consequences of an oil spill in a freshwater lake
By Diane Orihel
June 17, 2019

It’s an overcast spring day in northwestern Ontario and myself and a crew of students and scientists are getting ready to transform a freshwater lake into a science experiment.

I have been dreaming about this day for almost five years now and am over the moon to see it materialize. Preparations have been taking place in the field since the ice left the lake in May. The hardy crew has had to endure a great deal of physical work, making and moving 3,000 sandbags, as well as 1,000 kilograms of cement anchors, down a sketchy ATV trail to the shore while swatting blackflies and nursing bruises and blisters. We’ve constructed limnocorrals — gigantic floating rings, each with a curtain extending down to the lake bottom, that will essentially act as test tubes for a ‘real-world’ oil spill experiment in a boreal lake.

Over the last few days, we’ve meticulously anchored nine limnocorrals to the lake bottom at just the right depth to achieve roughly a similar volume of water in each. Now, a team of commercial divers has arrived to place the sandbags around the bottoms of the limnocorrals, sealing them tightly to the lake bottom to ensure they won’t leak and compromise the results of the experiment. This is important because the purpose of this experiment is to understand the consequences of an oil spill in a freshwater lake. In other words, it’s a typical day in the life of Canada’s Experimental Lakes Area. 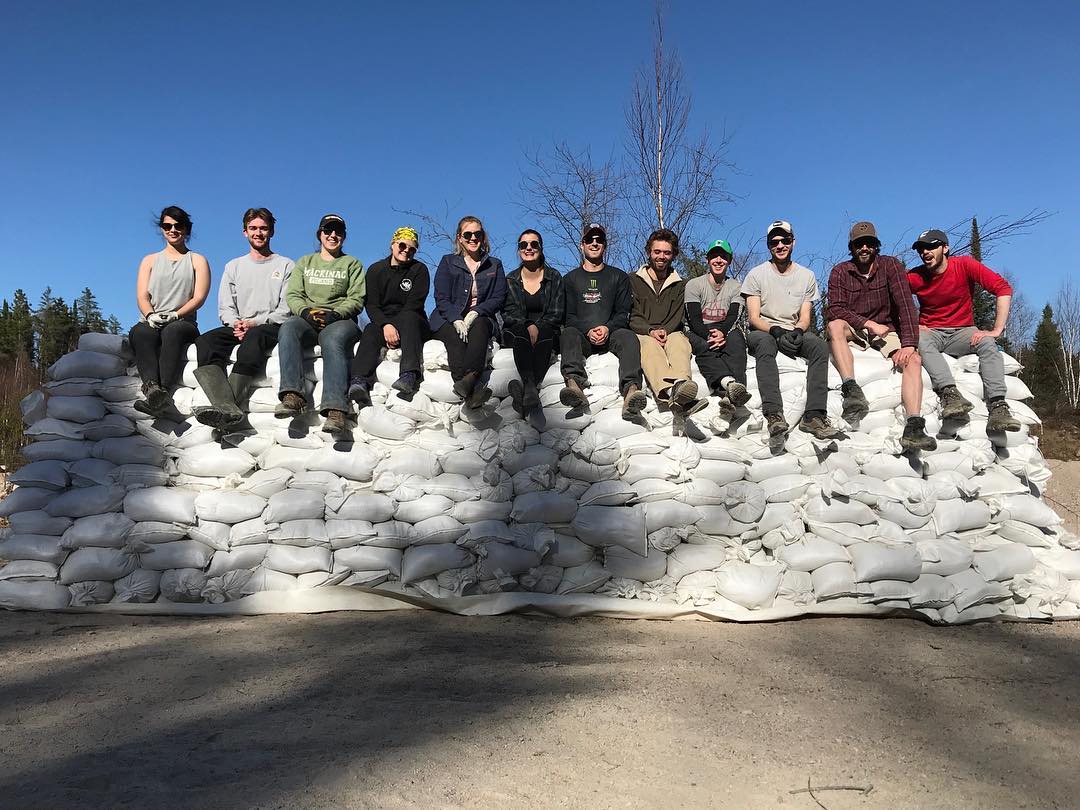 University students sit atop a pile of sandbags they helped make and move for the BOREAL science experiment.

The Experimental Lakes Area, or simply ‘ELA’ as the locals like to call it, is a pretty special place. It consists of 58 boreal lakes situated on the Canadian Shield, roughly 150 kilometres east of the Manitoba border, that have been set aside for scientific research. They are a living laboratory where scientists can do experiments on lakes – something that is not possible anywhere else in the world. Special exemptions have been written into provincial and federal law to allow scientists to manipulate these lakes physically, chemically, or biologically. Over the last 50 years, the ELA has helped us understand everything from which chemicals in detergents cause algal blooms to the impacts of climate change on the habitat of lake trout.

For most of the ELA’s existence, it was a federal government facility, staffed by scientists from the Freshwater Institute in Winnipeg, Manitoba, part of Fisheries and Oceans Canada. In 2014, following federal budget cuts and a change in the DFO’s strategic priorities, responsibility for the management of the ELA was handed over to a non-profit policy think tank, the International Institute for Sustainable Development. Since then, the facility has been rebranded as the IISD-Experimental Lakes Area (IISD-ELA).

The experiment we’re mounting today is called the Boreal Lake Oil Release Experiment by Addition to Limnocorrals — or simply BOREAL. I’m one of the principal investigators on the BOREAL project, along with Dr. Jules Blais from the University of Ottawa and Dr. Mark Hanson from the University of Manitoba. We want to understand what would happen if a pipeline carrying oil extracted from Alberta’s oilsands were to break and spill into a freshwater lake.

You see, the oil in Alberta’s oilsands isn’t like the liquid black gold that’s pumped from the oilfields of Saudi Arabia. Oil extracted from Alberta is called bitumen and it’s a heavy crude oil that’s as thick as peanut butter. In the same way that it’s hard to sip peanut butter through a straw, it’s hard to pump bitumen through a pipeline. Bitumen must be mixed with a something like a light gas condensate that helps it to flow nicely in pipelines. The resulting diluted bitumen, or ‘dilbit’ for short, may resemble Saudi oil in appearance, but it’s not nearly as stable in the environment when exposed to nature’s elements — and that’s in part why we need to learn more about it. 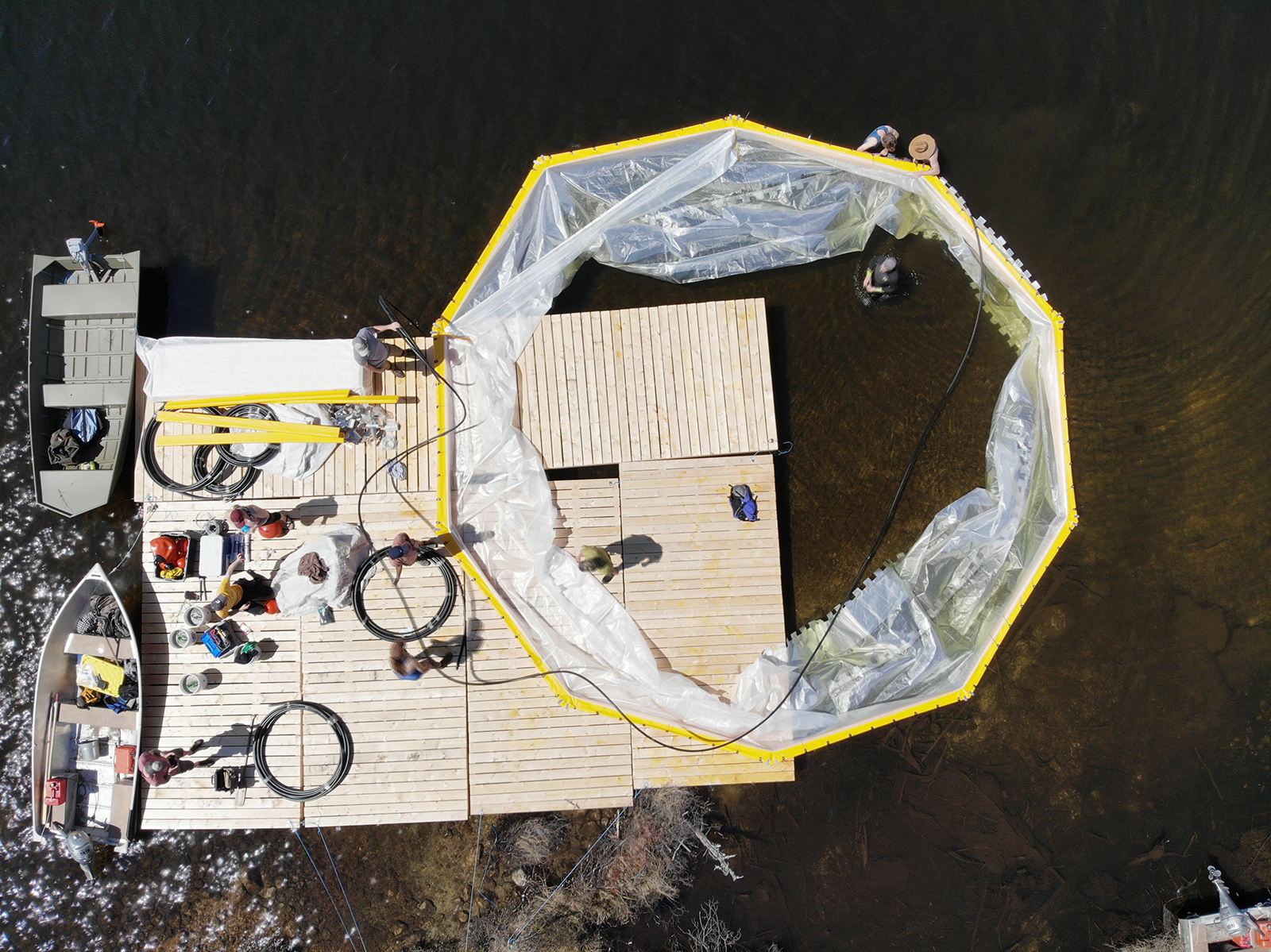 Students construct a limnocorral, which was used to enclose a portion of the lake for our experiment. (Photo: Tyler Black)

Pipelines — as well as rail — are used to move this unconventional oil from upgrading facilities in northern Alberta to refineries in the United States or to coastal ports of British Columbia to be loaded into ocean tankers destined for Asian markets. There’s a great deal of pressure from the oil industry and governments to build more pipelines to move more oil out of Alberta. A number of proposed pipeline projects are on the table right now, the most high-profile of which are the Trans Mountain Expansion across British Columbia and the Keystone XL expansion through the United States.

We already know quite a bit about how oil spills behave in the ocean; scientists have, unfortunately, had the opportunity to learn from a number of accidents over the years, from the Exxon Valdez oil spill in Prince William Sound, Alaska in 1989 to the Deepwater Horizon blowout in the Gulf of Mexico in 2010. Such accidents, coupled with releases in controlled experiments, have taught us how to monitor and respond to conventional oil spills.

That’s not the case with dilbit. The body of scientific information on dilbit is pretty sparse, especially when it comes to understanding how it interacts with the countless lakes, rivers, and wetlands it encounters as it travels across North America. So sparse, in fact, that panels of experts from the Royal Society of Canada and the National Academies of Sciences, Engineering, and Medicine in the United States have both called for more research to understand what happens when dilbit spills into water bodies.

That’s where BOREAL comes in. The goal of our study is to answer important questions about the fate, behaviour, and effects of dilbit in freshwater ecosystems under various outdoor conditions, including sunlight, wind, and thunderstorms — questions that can’t be answered effectively in the laboratory.

Down at the shore of Lake 260, teams of students in rubber boots and work gloves get to work loading sandbags into aluminum boats. The divers head over to a large raft near the limnocorrals to set up their air support system and don their drysuits and helmets.

The operation proceeds like clockwork, with boatloads of sandbags delivered from shore to the limnocorrals for the divers to position on the flared bottom of the curtain. Over the sound of the air compressor, we can hear the divers breathing hard into the two-way radios in their helmets. After the last sandbag is placed, I jump into the water with my snorkelling gear and swim around each limnocorral, checking to ensure the installation was done properly. Satisfied with a job well done, we call it a day.

With the limnocorrals in place, the monitoring of the systems begins. Before we can manipulate them, we must first get a sense of the baseline physical, chemical, and biological characteristics of these “mini-lakes.” About three weeks later, Dr. Bruce Hollebone and his team from Environment and Climate Change Canada release precisely measured volumes of dilbit into the limnocorrals to simulate pipeline spills of different sizes. The largest amount is more than a barrel and a half, representing an oil-to-water ratio similar to that spilled in 2010 from a pipeline in the Kalamazoo River near Marshall, Michigan. 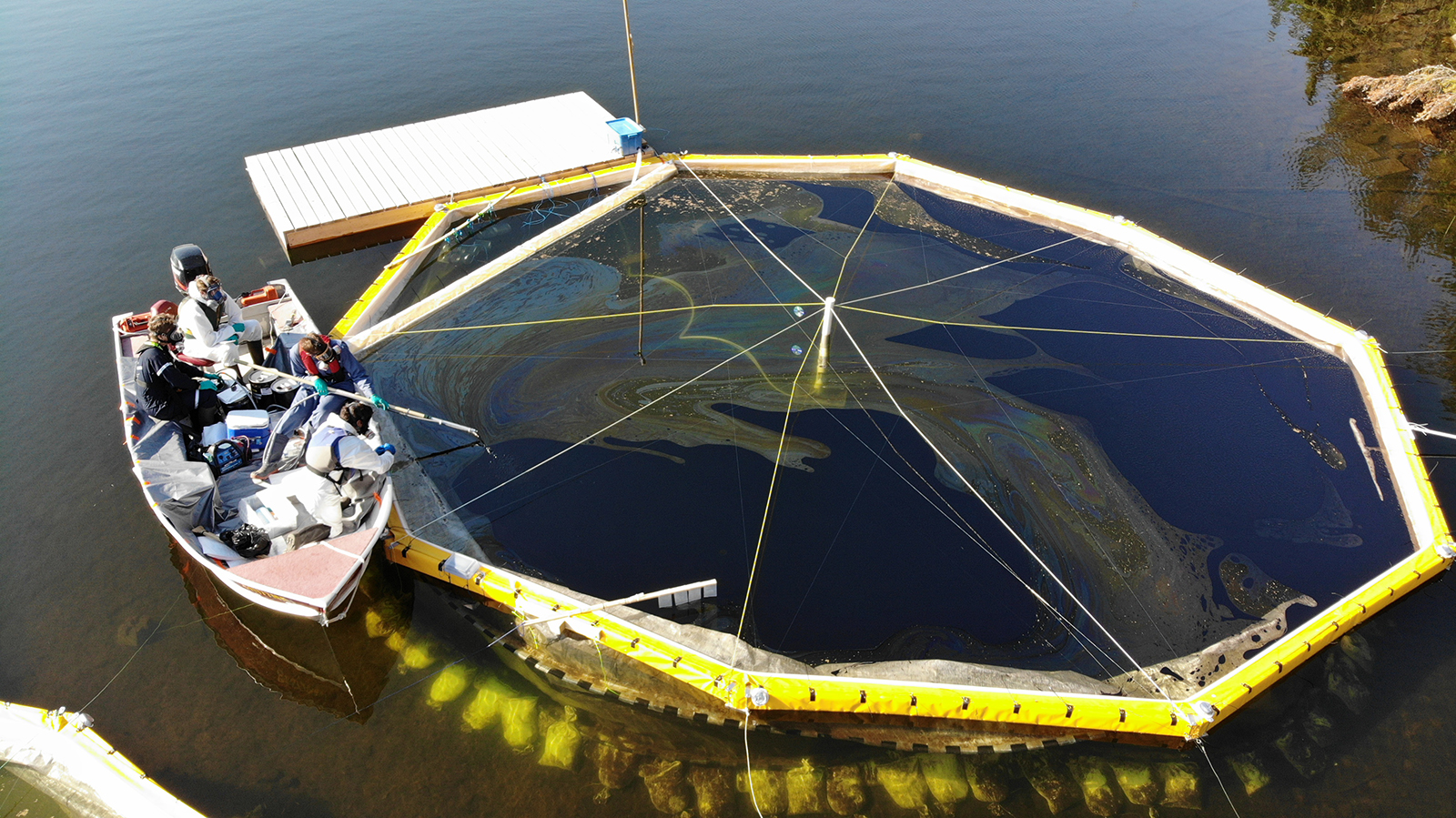 In the months that follow, we track how and when the oil sank and how much ended up on the bottom of the lake. We measure how the light, temperature, and oxygen content of the water changes. We take samples of water and sediment to analyze for hydrocarbons. We monitor how the number and types of bacteria, algae, insects, and other microscopic animals respond to the dilbit spill. We test small fish and tadpoles to see whether the dilbit has had any negative impacts on their health. Students and technicians are busy working away analyzing samples and data to piece together the story of what happens in a spill and will publish their findings in peer-reviewed journals in the next year.

The Canadian government will decide on the fate of the Trans Mountain Expansion tomorrow. There’s an extremely complex set of issues that decision makers will have to weigh as they decide how to proceed. Studies such as ours provide valuable insights into the risks of pipeline spills to the freshwater environment that can inform evidence-based policy decisions.

This experiment is also a significant accomplishment from the vantage point of IISD, as one of the first large-scale manipulation experiments at ELA under its new managers and set of regulations. Although there were bumps in the road, this experiment was successfully carried out in collaboration with IISD-ELA and its team of scientists, lending credence to how this new institutional model for the ELA can work. BOREAL also sets the stage for future research at IISD-ELA that will look at remediation options for cleaning up dilbit spills in lakes.

On a personal level, this study is a memorable victory for me. As one of the scientists who fought hard to save ELA after it was cut by the Harper government, it was very rewarding for me to return five years later as a professor with my graduate students to continue the tradition of ‘big dreams, big science’ at ELA that made it the special place it has been for the last 50 years, and hopefully will continue to be for the next 50 years and beyond.

The BOREAL study was funded by an NSERC Strategic Partnership Grant to Dr. Jules Blais (University of Ottawa), Dr. Mark Hanson (University of Manitoba), and Dr. Diane Orihel (Queen’s University), in partnership with Dr. Bruce Hollebone (Environment and Climate Change Canada) and Dr. Vince Palace (IISD-Experimental Lakes Area) and many other collaborators at Canadian academic and government institutions. The BOREAL project would not have been possible without the support of Environment and Climate Change Canada, IISD-Experimental Lakes Area, and Fisheries and Oceans Canada.

Dr. Diane Orihel is an Assistant Professor and National Scholar in Aquatic Ecotoxicology in the School of Environmental Studies and Department of Biology at Queen’s University, Canada and is a former Liber Ero Fellow. The Liber Ero Fellowship Program supports early-career scientists working to improve the conservation of Canada’s wild places and natural resources. Follow them on Twitter.