Muskox populations in Canada's High Arctic have been struggling in recent years, and one University of Calgary researcher and her students are working out why
By John Bennett
April 3, 2017

Canada is home to most of the world’s native muskox, but in recent years their numbers in the western Canadian Arctic Archipelago have been dropping. University of Calgary research veterinarian Susan Kutz leads a team of scientists and graduate students* who are working with Inuit hunters, outfitters and government biologists to find out why.

Muskox, known to the Inuit as umingmak (“the bearded one”), are genetically unique. Ice-age survivors, they’re not actually oxen — their closest relatives are goat-like animals that live in the Himalayas and the mountains of Japan. In western Nunavut and Northwest Territories communities such as Cambridge Bay and Ulukhaktok, both of which are on Victoria Island, muskox are an important source of food. Their inner wool, qiviut, is unmatched in its warmth and softness.

“Our research brings scientific and local and traditional knowledge together,” says Kutz, whose muskox project is supported in part by Polar Knowledge Canada. Her team gathers information from population counts and analyzes samples of droppings, hair, bone and blood provided by hunters in Cambridge Bay and other communities.

Several factors are adversely affecting muskox health, including a worm that infests the lungs and weakens the animal. “The lungworm, Umingmakstrongylus pallikuukensis [the first parasite to be named in Inuinnaqtun, the local dialect of the Inuit language], has crossed from the mainland and expanded across Victoria Island in a very short period of time,” Kutz explains, “likely because warmer temperatures helped the larval worms thrive in slugs and snails, their hosts.”

Meanwhile, hunters have also discovered groups of dead muskox, and Kutz was surprised to find a familiar bacteria, Erysipelothrix rhusiopathiae, in their carcasses.

“It’s typically found in pigs and poultry, but it can infect everything — including people,” she says. “We’re trying to understand why it’s there, how long it’s been there and whether it’s causing the deaths directly or if there are underlying causes.”

By testing samples of qiviut [the inner wool], the researchers have found that stress-hormone levels are generally higher in muskox on the Arctic islands than on the mainland, which could indicate sources of stress significant enough to make the animals more susceptible to diseases.

Another discovery made by Kutz’s team was a surprisingly high rate of broken incisors among Victoria Island muskox. This mechanical breakage, she says, could be linked to changes in vegetation and grazing conditions as a result of abnormal weather and climatic patterns. 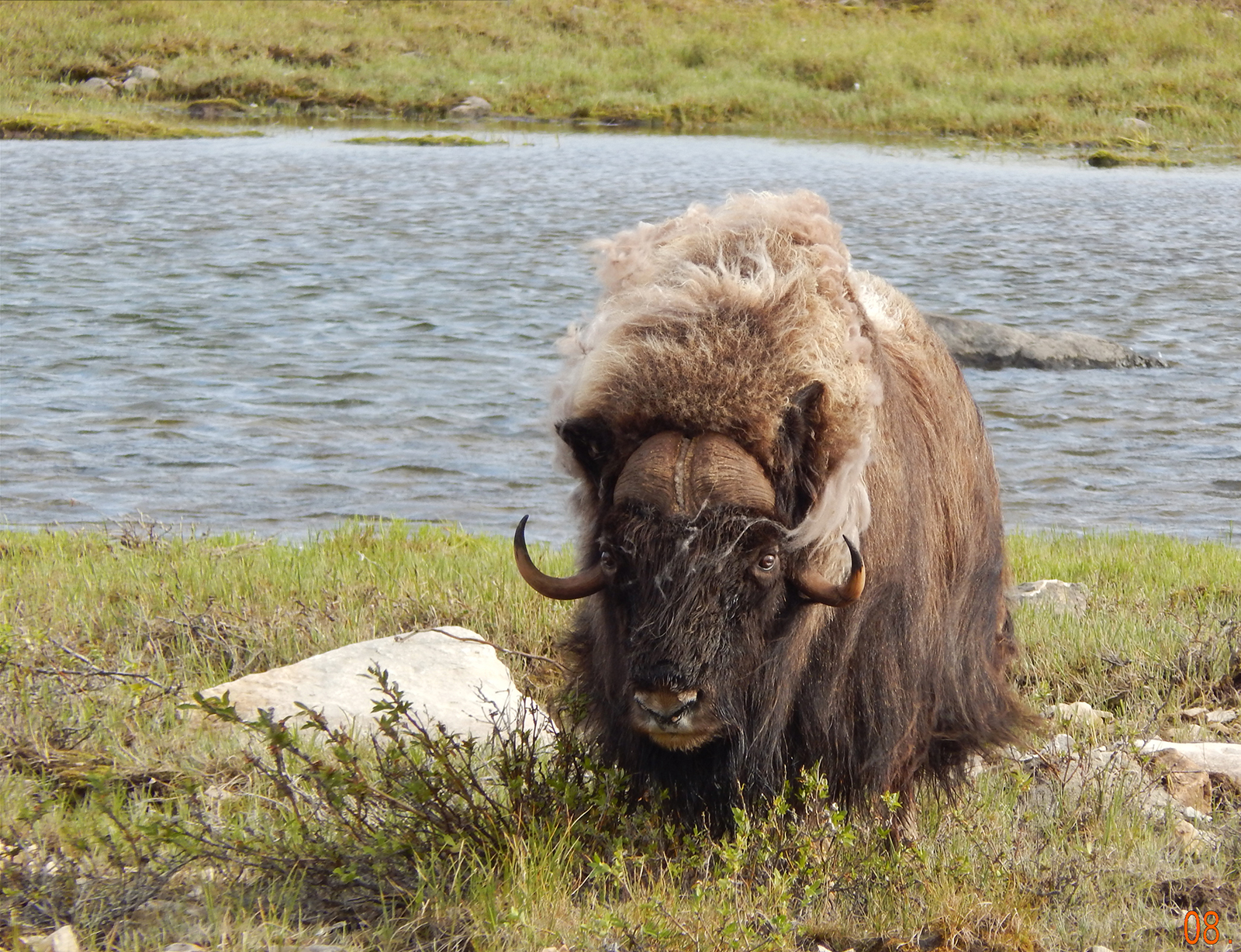 Warmer average temperatures are changing the nature of vegetation and weather patterns in the Arctic, which may in turn be contributing to everything from heightened stress levels and lower immunities to broken teeth among muskox. (Photo: Johann Wagner/Polar Knowledge Canada)

All this fits with what the local experts are saying. “People have reported finding more dead animals, muskox in poorer condition, smaller groups and fewer young,” says Kutz. “Their perspectives have provided us more insight into why the animals may be declining.”

Kutz’s work is enhancing understanding of climate change by showing how one of its effects, the spread of parasites, operates in the Arctic. It’s also uncovering valuable information about an iconic Arctic animal whose native habitat is Canada — and whose health is crucial to the Inuit communities that depend on it. Her team is doing this by using all available sources of knowledge and data. “That’s the strength of this program — science and Indigenous knowledge working together,” Kutz says. “We want to ensure that there are sustainable muskox populations in the future.”

* Graduate students Juliette Di Francesco, Pratap Kafle and Matilde Tomaselli, as well as veterinarian Sylvia Checkley, have made essential contributions to this research.