What is a nudibranch? Meet the “high fashion models” of the ocean depths

The naked truth about nudibranchs, in British Columbia and beyond
By Jett Britnell and Kathryn Britnell
March 12, 2019

“Of all the creatures in the sea, these are the high fashion models.” That’s how famed National Geographic photographer David Doubilet once described nudibranchs. Without doubt, nudibranchs have acquired legions of fans around the world, and for good reason. New species are still being discovered each year and scuba divers always hope to get lucky and encounter a nudibranch they’ve never seen, or photographed, before. Non-scuba divers are no less enthralled whenever they are shown pictures of these beguiling sea creatures.

But what in blue blazes is a nudibranch? Nudibranchs (pronounced NEW-dee-bronk), are soft-bodied, shell-less marine mollusks or sea slugs. Their scientific name, Nudibranchia, comes from the Latin word nudus and the Greek word brankhia, which together means “naked gill,” a reference to the exposed, plume-like extremities that most wear on their backs. They’re found in seas around the globe, from the tropics to the Southern Ocean, and of course, off Canada’s three coastlines. 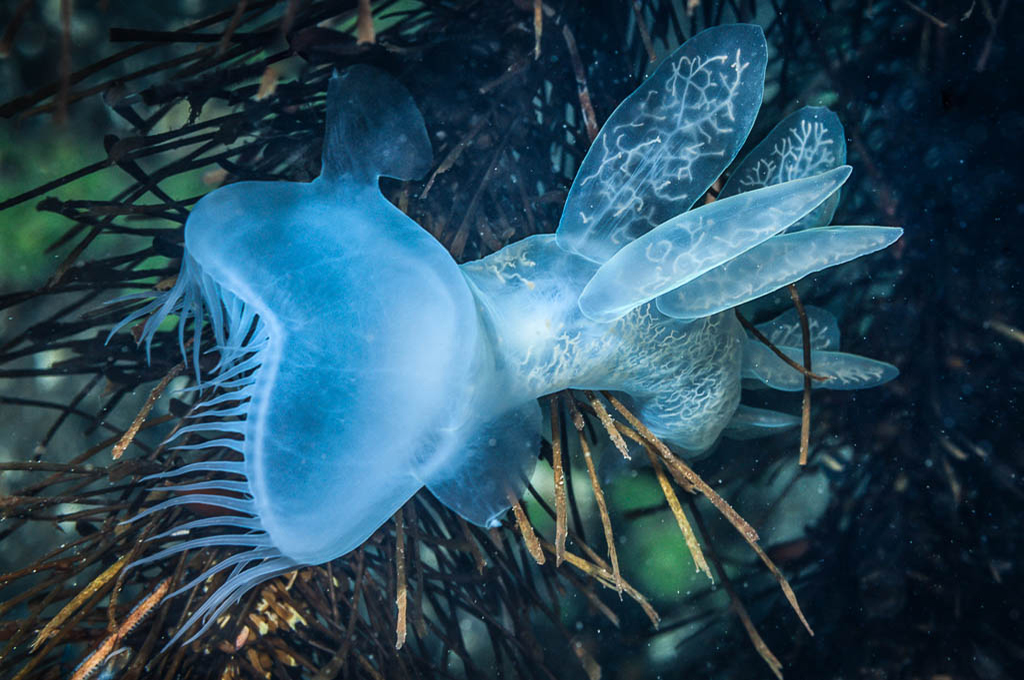 A hooded nudibranch (Melibe leonine). Jellyfish-like, these nudibranchs unfurl their tentacled oral hoods to suck in small planktonic shrimp, then close this oral hood on their prey like a Venus flytrap. (Photo: Jett Britnell)

In British Columbia, where we live, nudibranchs inhabit the emerald depths in such high concentrations, the province is considered Canada’s hotspot for the creatures. Since our work as underwater photographers requires us to have more than a passing acquaintance with nudibranchs, we photograph as many species as we can.

There are two distinct types of nudibranchs: aeolids and dorids. Aeolids absorb oxygen through their skin and have a series of horn-like projections, called cerata, on their heads and backs that allow them to take in more oxygen. Dorids, the most common type of nudibranch, breathe through a tuft of external feathery gills that they can retract into their body for protection if needed. Nudibranch gills come in many shapes and sizes and are used for breathing, digestion, and defence. While in other parts of the world the average length for nudibranchs is about two centimetres, British Columbia’s nudibranchs are giants by comparison, generally reaching 15 to 30 centimetres in length. 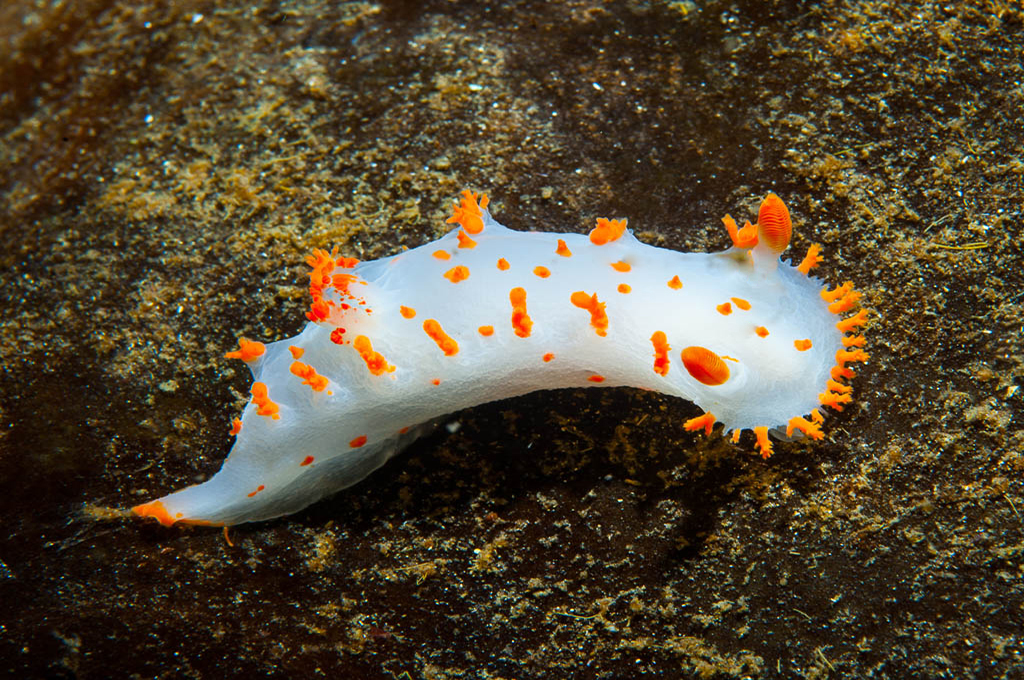 Cold water nudibranchs like those found in B.C. waters are no less exotic-looking than their riotously-coloured tropical counterparts. All nudibranchs derive their colouring from the food they eat and the terrain they inhabit. Because they lack an outer protective shell, nudibranchs have evolved several different ways of defending themselves. Some employ camouflage to blend in with their surroundings, while others use their vibrant and contrasting colours to deter predators from devouring them. Many nudibranchs make themselves unpalatable to predators by absorbing foul-tasting toxins from sponges into their body tissues, and some even recycle stinging cells from sea anemones into the tips of their cerata.

Nudibranchs also soak up their prey’s pigment into their tissue, which allows them to be camouflaged while feeding atop the very animals they eat. Since nudibranchs are harmless to humans, people in Chile and some islanders in Alaska and Russia consider them a delicacy to be eaten either boiled, roasted, or raw. For the uninitiated, the experience is a bit like chewing a rubber pencil eraser. 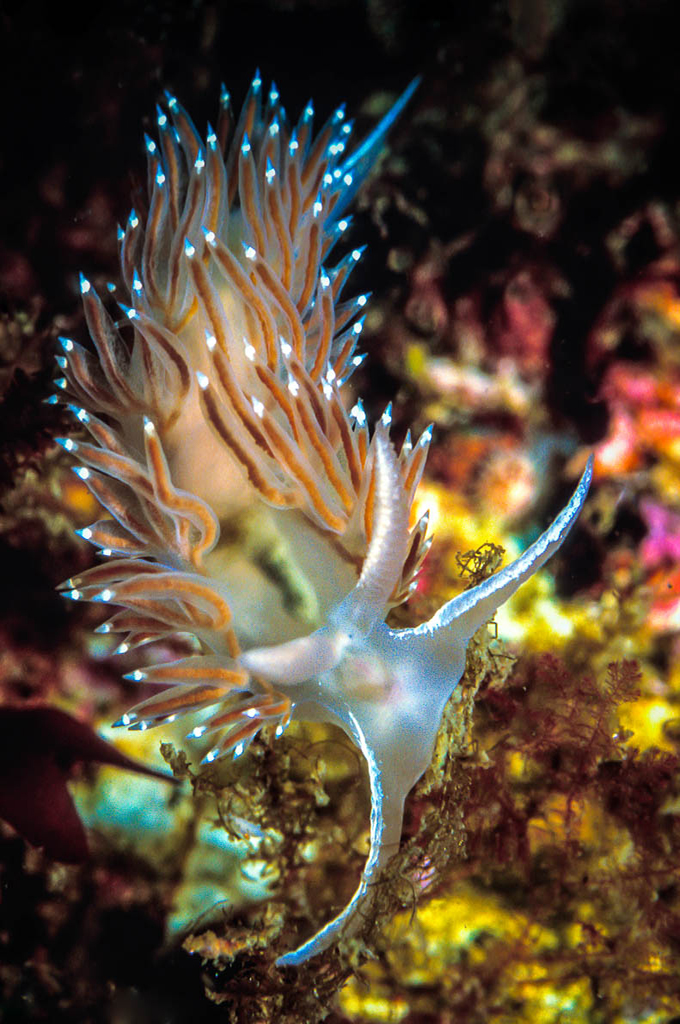 The red flabellina nudibranch (Flabellina triophina). Beautiful to look at, this particular species has a confusing taxonomic history due to different colour variations and animals from Europe and North America being considered different species.
(Photo: Jett Britnell)

Life on the seafloor

Nudibranchs are mostly found on the ocean floor. They move around by way of a broad, flat muscle on their underside called a foot. Some can even swim short distances in the water column by undulating their foot muscle. As you may have guessed from the section above, nudibranchs are omnivorous and have oral tentacles near their mouths which act like hands to help them poke around for grub. They possess a set of curved teeth called radula, which they use to munch on a wide variety of organisms including hydroids, seaweed, corals, algae, barnacles, fish eggs, sponges, anemones and even other nudibranchs. Some species are finicky eaters, consuming only one kind of prey. 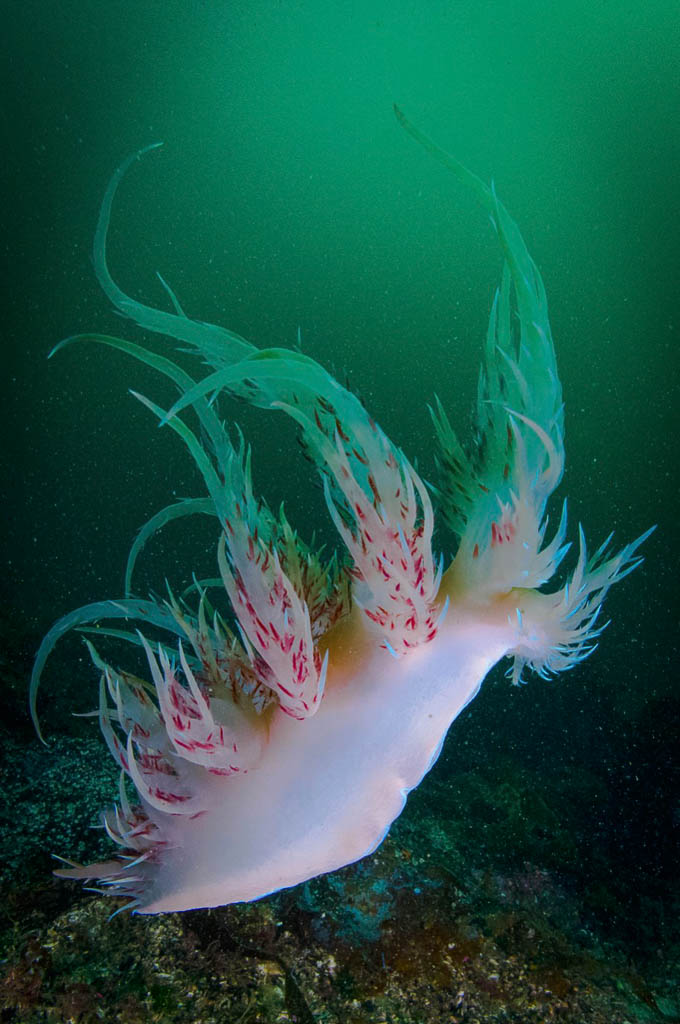 The giant nudibranch (Dendronotus iris) is one of the nudibranch species that can swim by undulating its body. This species loves to hunt tube-dwelling anemones and will attack by rearing up and plunging into the center of the anemone.
(Photo: Jett Britnell)

Nudibranchs have poor vision and can only discern light and dark, so they must sense the world through two highly sensitive tentacles called rhinophores located on top of their heads. These rhinophores tend to stick out and serve as a nice lure for hungry fish; fortunately, most nudibranchs have the ability to completely withdraw their rhinophores into a receptacle in their skin whenever they sense danger.

Fascinatingly, nudibranchs are simultaneous hermaphrodites possessing the reproductive organs of both sexes, which allows them to mate with any other mature member of their species. Because they do not roam too far and have a short lifespan, ranging from one week to one year in the wild, survival of the species depends on their ability to mate whenever the opportunity presents itself. After a dance-like courtship, the mating ritual only takes a few minutes. Nudibranchs lay ribbon-like egg masses that hatch into free-swimming larvae, which eventually settle on the seafloor as adults. 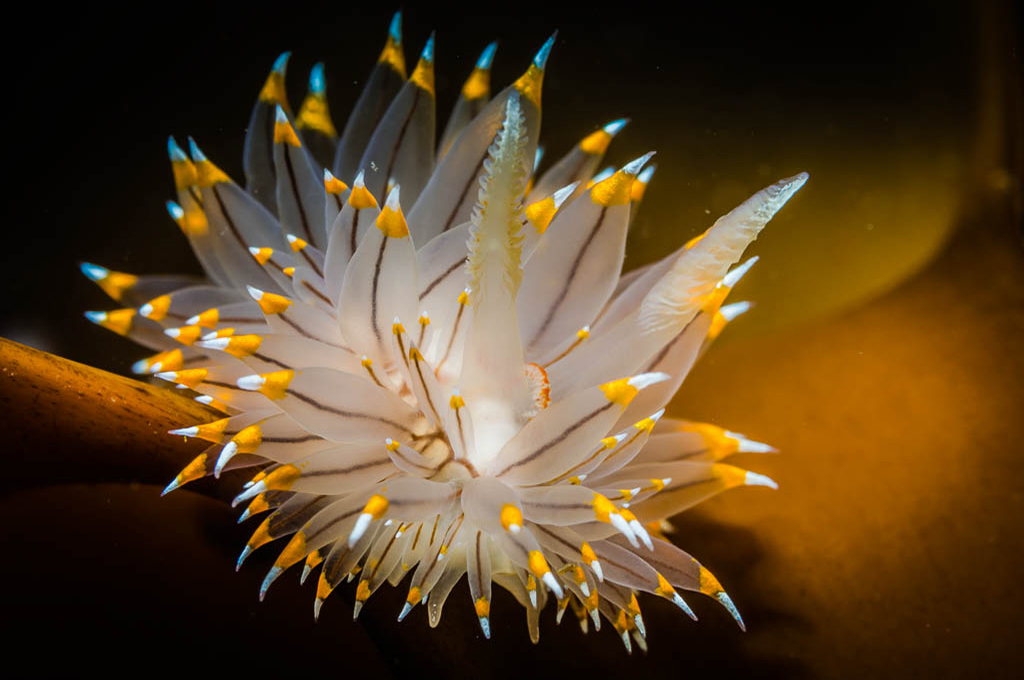 When Janolus fucus, the orange-tipped nudibranch, senses it is about to be caught by a predator, it will roll itself into a ball, leaving its cerata exposed. If there is any water current present, as is often the case, this nudibranch will then allow the current to passively roll it away from the predator. (Photo: Jett Britnell)

Scientists are keenly interested in nudibranchs for two reasons. One is they believe the chemicals these animals store could be used to develop new medicines for use in humans. One compound stored by nudibranchs called Latrunculin A is the subject of ongoing research to develop new treatments for cancer and neurodegenerative diseases.

Secondly, the DNA of nudibranchs may offer insights into ocean conditions relative to climate change. Global warming threatens the genetic diversity of some marine species and compromises their ability to evolve as undersea environments change. A population explosion of any one nudibranch species may serve as an early warning system for further problems.

Recent multi-year warming events have caused a 2,000-kilometre patch of the Pacific Ocean to heat up several degrees above normal, a phenomenon meteorologists have taken to calling “the Blob.” As if on cue, nudibranchs normally found in southern California began appearing farther north, signalling a potentially troubling shift in the coastal ecosystem. The Blob is also believed to be responsible for an unsettling decline in spawning salmon returns in British Columbia, resulting in less food for whales, sea birds and other marine species, along with unseasonably hotter weather patterns on land.

For now, British Columbia’s nudibranchs appear to be doing just fine. The greatest present dangers for our local nudibranchs are habitat loss or degradation and being harvested for the aquarium trade. But any changes affecting their normal food chain could prove detrimental as the world’s marine ecosystems continue to experience environmental impacts from global warming.

Are nudibranchs the proverbial “canary in the coalmine” for both the ocean realm, and our own survival? Time alone will tell, but there is evidently much more to these beautiful “butterflies of the sea” than meets the eye.

Jett and Kathryn Britnell are underwater, wildlife and expedition photographers, internationally published writers, explorers, scuba divers and speakers. Both are Fellows of the Royal Canadian Geographical Society, The Explorers Club and the Royal Geographical Society. Jett is presently serving a two-year term as Regional Director BC/Yukon in The Explorers Club’s Canadian Chapter. Follow them on Twitter and Instagram.

Related: The parks beneath the sea