What Canada can learn from the eruption of Mount St. Helens | Canadian Geographic

What Canada can learn from the eruption of Mount St. Helens

On May 18, 1980, Mount St. Helens exploded in the largest volcanic disaster ever recorded in the United States. Forty years later, work continues to understand the eruption and its aftermath — with some surprising Canadian connections.
By Christian Stenner
May 18, 2020

Months of anticipation in the Pacific Northwest came to a climax early in the morning of May 18, 1980. At 8:32 a.m., a magnitude 5.1 earthquake triggered a cataclysmic chain reaction at Mount St. Helens, an active stratovolcano located about 150 kilometres south of Seattle, Wash.

An injection of viscous magma had already destabilized the north flank of the volcano, which then gave way in the largest landslide in recorded history. The sudden removal of rock by the landslide made way for the abrupt release of high-temperature, high-pressure steam present in cracks and voids in the volcano and gases dissolved in the magma. These, mixed with new lava and pulverized rock, burst northward in a devastating lateral blast. The blast velocity peaked at 1,078 kilometres per hour and quickly overtook the landslide. Within the direct blast zone – a radius averaging 13 kilometres — nearly all things living and manmade were totally obliterated.

The eruption also melted nearly all of the mountain's glaciers, along with most of the overlying snow. Huge lahars (volcanic mudflows), travelling at speeds of up to 140 kilometres per hour, affected three of the four stream drainage systems on the mountain. The ash column rose throughout the day, spreading some 500 million tonnes of ash across the Pacific Northwest and into Canada, with ash falls reported as far north as Red Deer, Alta.

By early May 19, the initial eruption had ended, revealing some of the devastation left in its wake. An estimated 57 people were dead. The once-conical mountain now featured a gaping 1.9-kilometre-wide and 635-metre-deep horseshoe-shaped crater on its north face. Some 600 square kilometres of forest were destroyed. The eruption caused billions of dollars of direct and indirect losses, cementing its legacy as the largest volcanic disaster in the history of the United States. Today, the Mount St. Helens National Volcanic Monument protects the volcano and surrounding area for research, public education and recreation.

May 18, 2020 marks 40 years since the violent eruption of Mount St. Helens. In the years since, a natural laboratory has sprung forth from the devastation and Mount St. Helens is now one of the most intensively-studied volcanoes on Earth. But the volcano has not simply been asleep since then; some curious things have continued to happen in its crater.

Episodic unrest in the crater between 1980 and 1986 brought forth a series of new lava domes, one of which grew to be 350 metres tall. A perennial snowfield first formed on the south side of this dome in the winter of 1982-83. The weather surrounding the volcano has no bearing on the inside of the crater, where captive storms can deposit snow despite sunny conditions just beyond the crater rim. Additionally, snow slides off the inner crater wall and from the lava domes. The crater remains in shade much of the time, allowing the snow to accumulate without melting. The conditions make for a perfect glacier factory. From the fire, glacial ice has been born in the crater, and has advanced at incredible rates of up to 1.5 metres per day. Crater Glacier, as it is now officially known, is the newest and one of the last expanding glaciers in the Cascade Volcanic Arc.

Another period of unrest started in September 2004, resulting in the creation of new lava domes and some small explosions, as well as plumes of volcanic ash and gases. Ongoing activity through 2008 bisected, fractured, and compressed the glacier, and now its east and west arms completely encircle the lava domes.

Reams of studies dedicated to these disciplines are not the only by-product of the 1980 eruption. The devastation of the surrounding landscape, described by then-President Jimmy Carter as a “moonscape,” has slowly been transforming from barren to bountiful as the site has been allowed to rebound naturally. Recolonization of the site by forest animals, wildflowers, and the forests themselves has occurred amidst the pumice plains and landslide deposits.

Understanding the eruption and events leading up to it has implications for Canada as well.

In addition to being gifted a bucket of ash from the 1980 disaster by a retiring biology professor, Williams-Jones led one of the last field trips up to the crater just before the start of the 2004 eruption. Through that experience he was reminded of the speed at which things can change within an active volcano: in an extraordinarily well-monitored location, suddenly a lava dome was forming and displacing the glacier. “It gives us some pause that expecting to see slow signs at other locations can sometimes be wishful thinking.”

At the Mount Meager Volcanic Complex north of Pemberton, B.C., overlapping ridges scoured by glaciers give little sign at first glance that this is Canada’s only currently active volcano. Mount Meager was the site of an eruption 2,400 years ago similar in scale to the 1980 eruption at Mount St. Helens. And recent discoveries of unstable slopes at Mount Meager, believed to be the result of the interplay between the mountain’s volcanic geology and a rapidly receding glacier, have caused geologists to propose an interesting theory: could a landslide at Mount Meager expose its internal pressurized gasses, “popping the cork” and leading to a destructive event like at Mount St. Helens?

“A series of dominoes would need to line up.” says Williams-Jones. A landslide at the complex in 2010 was the largest in Canadian history, and one of the unstable slopes recently identified at the site has 10 times the potential volume of the 2010 slide. “Is that landslide big enough, and what is the state of the magma chamber? There are still questions to be answered.”

For this and other reasons, Williams-Jones has great interest in establishing a comprehensive monitoring program in Canada, including increased density in the seismic monitoring network.

“Canada’s volcanoes are more isolated, but the effects of [eruptions] in Alaska or Washington State can have far reaching effects. Volcanoes don’t care about borders,” he says.

The caves inside the crater 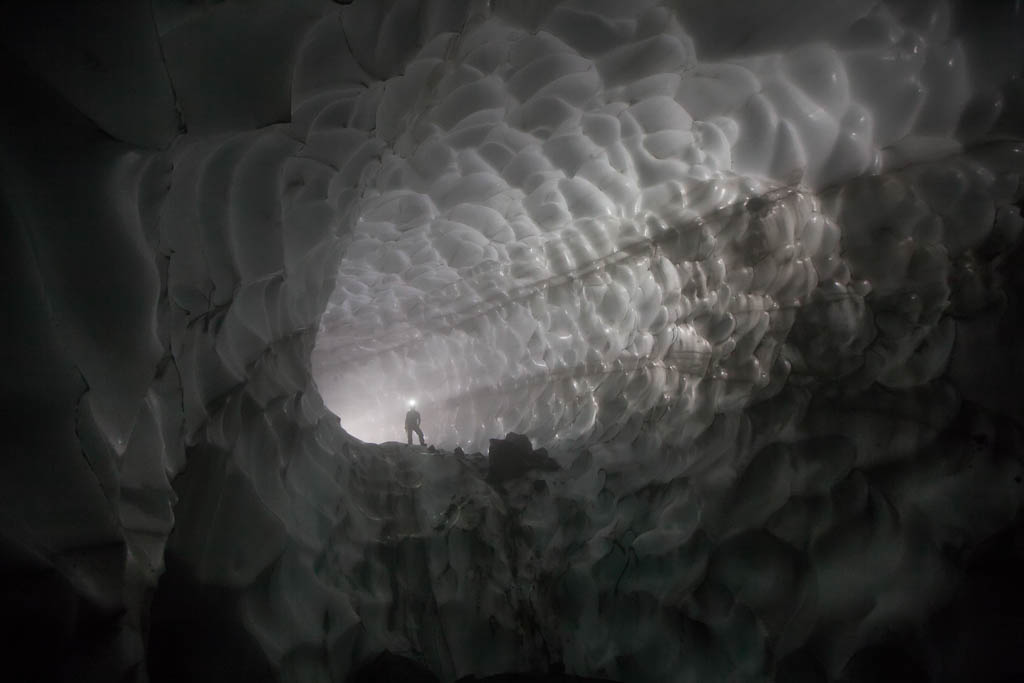 An ice tunnel inside a cave in Crater Glacier. (Photo: Christian Stenner)

The crumbling noises are constant. Loose rocks careen down the slope of the crater, impacting each other with a crack and coming to a rest on top of the glacier. Surveys done in 1982 and again in 2009 found a 10-metre difference in the summit height of Mount St. Helens. The crater wall is eroding, collapsing on top of the glacier. It’s like being in a bowl of Rice Krispies. Here inside the volcano, an ongoing project by an international team of researchers has been studying one of the more poorly understood phenomena in glaciovocanism: fumarolic ice caves that have formed in Crater Glacier.

Inside the crater, Mount St. Helens seems an even more otherworldly place. Volcanic steam and gases rising from around the 2008 lava dome have carved an intricate network of cave tunnels within the glacial ice mass. These never-before-entered cave passages, formed by volcanic gas, underneath an advancing glacier, inside an active volcanic crater, with rockfall all around, are now a remote laboratory within the broader laboratory of the volcanic monument. Such environments are called DOVES (Dark Oligotrophic Volcanic Environments), a unique type of nutrient-poor environment which may mimic conditions elsewhere in the solar system. But cataloging and understanding an environment about which no information exists is challenging. One of the first obstacles is discovering what is even there, in a way that can place all the other scientific work on the map.

Canada’s contribution to the research team is myself and Kathleen Graham, experienced cavers who have also been working to explore and map Bisaro Anima, Canada’s deepest cave. We recently completed mapping efforts and sample collections in the Mount St. Helens crater. The result is 10 new and distinct glaciovolcanic caves comprising a network 2.3 kilometres in length.

The Mount St. Helens caves have no previous human contamination, making them an incredible resource for biological discovery. The geomicrobiology group at NASA’s Johnson Space Center is conducting the largest metagenomic study ever done on a cave environment involving the Mount St. Helens cave bacteria. This is a unique opportunity to unlock the genetic functionality of the organisms and learn about metabolic mechanisms for their survival, such as whether they eat volcanic rock or gasses, and whether they have antibiotic properties. Samples provided to Dr. Rick Davis of the Johnson Space Centre have already identified new bacteria from the sediments deep within the Mount St. Helens caves. The 24 megatonnes of energy released during the eruption eradicated all life in the crater; finding out how life colonizes an environment, even in such inhospitable conditions, could hold clues to the origin of life itself.