On a muggy Thursday in August 2018, I joined 250 researchers and other attendees at West Edmonton Mall’s Fantasyland Hotel to learn about new findings in a field of geography many others have deemed dangerous, others groundbreaking. Though conference speakers would shy away from using the S-word (too many negative connotations), they were ready to present science proving everything we know about the Earth — its shape, size, position in the solar system and the whole damn system itself — is wrong.

The research was so breathtaking that some had brought their children and grandparents to hear it. We arrived at 8 a.m. to collect our name tags and itineraries for the two-day conference.

Many were thrilled to see that the first presenter was none other than Mark Sargent, arguably the reason we were here. For he had almost single-handedly caused a resurgence of the ancient and beleaguered Flat Earth Sciences.

“People are wondering, what is going on?” Robbie Davidson, organizer of Canada’s first Flat Earth International Conference, said proudly during his words of welcome. “How in the world, in 2018, can so many people be questioning something as simple as the Earth?”

In short, on Feb. 10, 2015, Sargent, a Washington-based former software consultant, uploaded “Flat Earth Clues Introduction,” the first video on his YouTube channel, which now has nearly 65,000 subscribers. It created a Cambrian explosion of amateur scientists conducting observable, repeatable experiments supporting the theory that we live on a stationary disc inside of a pressurized system (which gives us the illusion of gravity), encircled by the Antarctic ice walls (which contain our oceans), beneath a physical dome (beyond which there isn’t much else other than the Creator). As for the sun, moon and stars, they may either hang from the ceiling or are projected upon it; the science is incomplete. The Flat Earth community, which numbers in the tens or hundreds of thousands, can’t agree on all worldly matters — not even that the Earth is, well, flat. But they’re dead certain it’s not a globe. 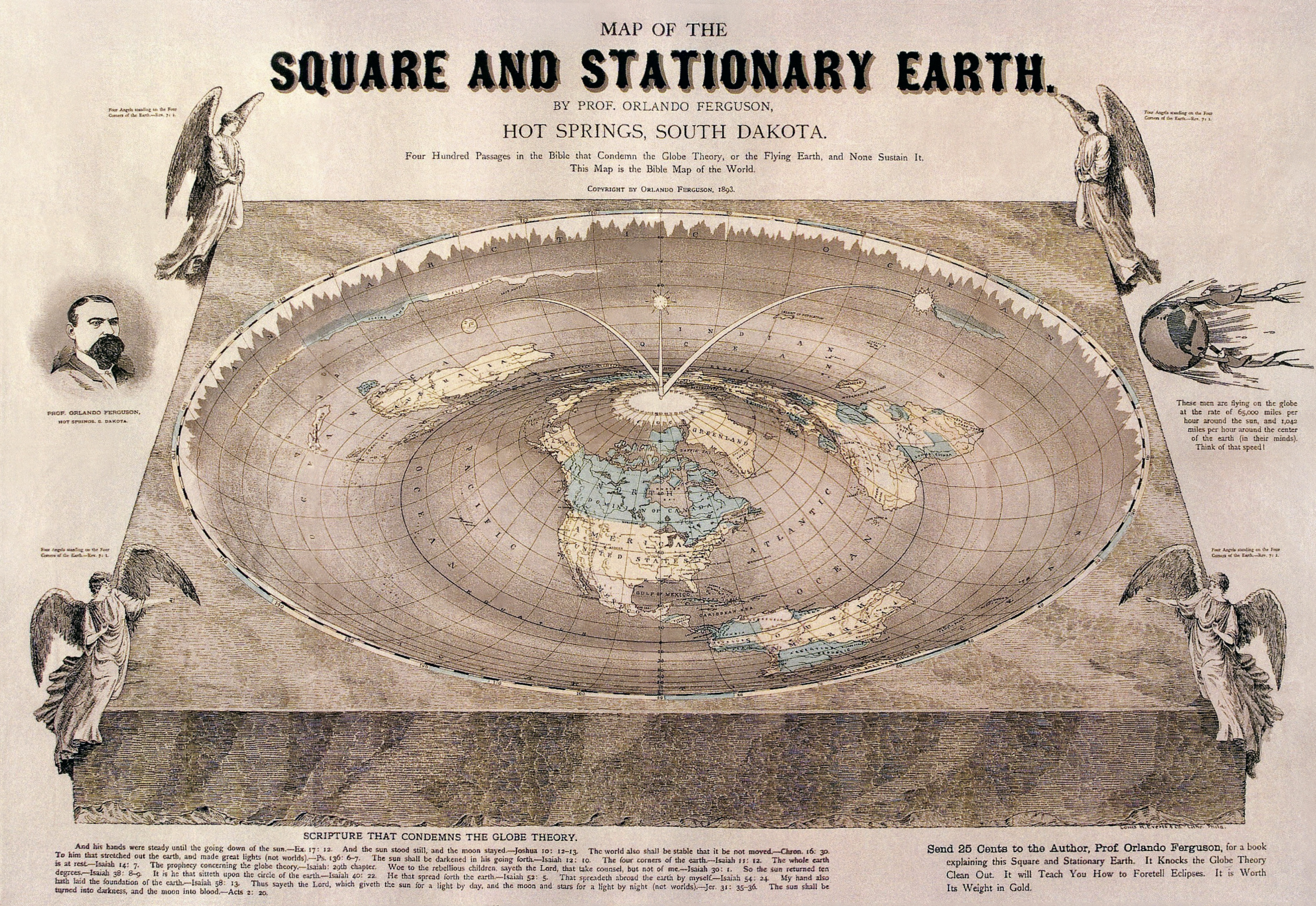 Sargent soon stepped on stage in an unbuttoned dress shirt and army hat. He sat in the lone leather chair flanked by conference banners and giant screens for all in the banquet room to see him. For 50 straight minutes he fielded conventioneer questions about the Flat Earth, rarely pausing or hesitating, and never once fumbling an answer.

If the planets look like spheres, aren’t we also a sphere? asked someone. (There’s no proof any of them are spherical.) What’s the moon? (Probably a two-dimensional object with three- dimensional properties.) Why won’t the science community just come clean? (Because overnight markets would crash, universities would shutter and people of faith would rightfully demand answers on other conspiracies, such as evolution.) How does he account for satellite photography of the Earth? (Adobe Photoshop.)

They queried with sincerity, not criticism, save for one member of the fake news media. She demanded to know why no expedition has proven the ice walls exist. Had she seriously not heard of the 1959 Antarctic Treaty System to stop such an expedition? That’s Flat Earth 101.

Their questions were also asked with genuine worry. Since learning about the grand conspiracy to conceal the planet’s true shape, Flat Earthers reported losing friends, being punted from churches and generally losing sleep. As Mickey Bromley, inventor of the Flat Earth-themed board game Hand2Hand, explained: “You have to rethink everything in your life. It’s not an easy task, and it is exhausting.”

I expected to meet more skeptics amongst the conventioneers, who included three physicians, a pharmacist and a former reporter, but only found three. Amongst them was a 13-year-old girl who mockingly wore a tinfoil hat, even after Davidson denounced “globists” who bullied and shamed Flat Earthers. “It’s not a laughing matter because people are hurting,” he said. “It’s time to stop the ridicule, it’s time to stop the name-calling, it’s time to stop the threats.”

Over the course of the conference, attendees jeered at footage of astronauts and evolutionary biologists, booed at the very mention of Neil deGrasse Tyson, used air quotes around the word “scientist” and got nostalgic about the days when “globetards” were the minority. Davidson, an Edmonton-based entrepreneur who has worked in Christian media and crypto-currency trade, condemned the lies spread by “scientism” and NASA. “Gravity is the least scientific thing there is,” he told me. “It’s never been properly measured, tested or observed.” As for the Earth’s alleged curvature — eight inches per mile squared — it simply doesn’t match with his own findings. He can see objects 100 miles away, he says, yet those objects are supposed to be 1.5 miles below the curvature of the Earth! 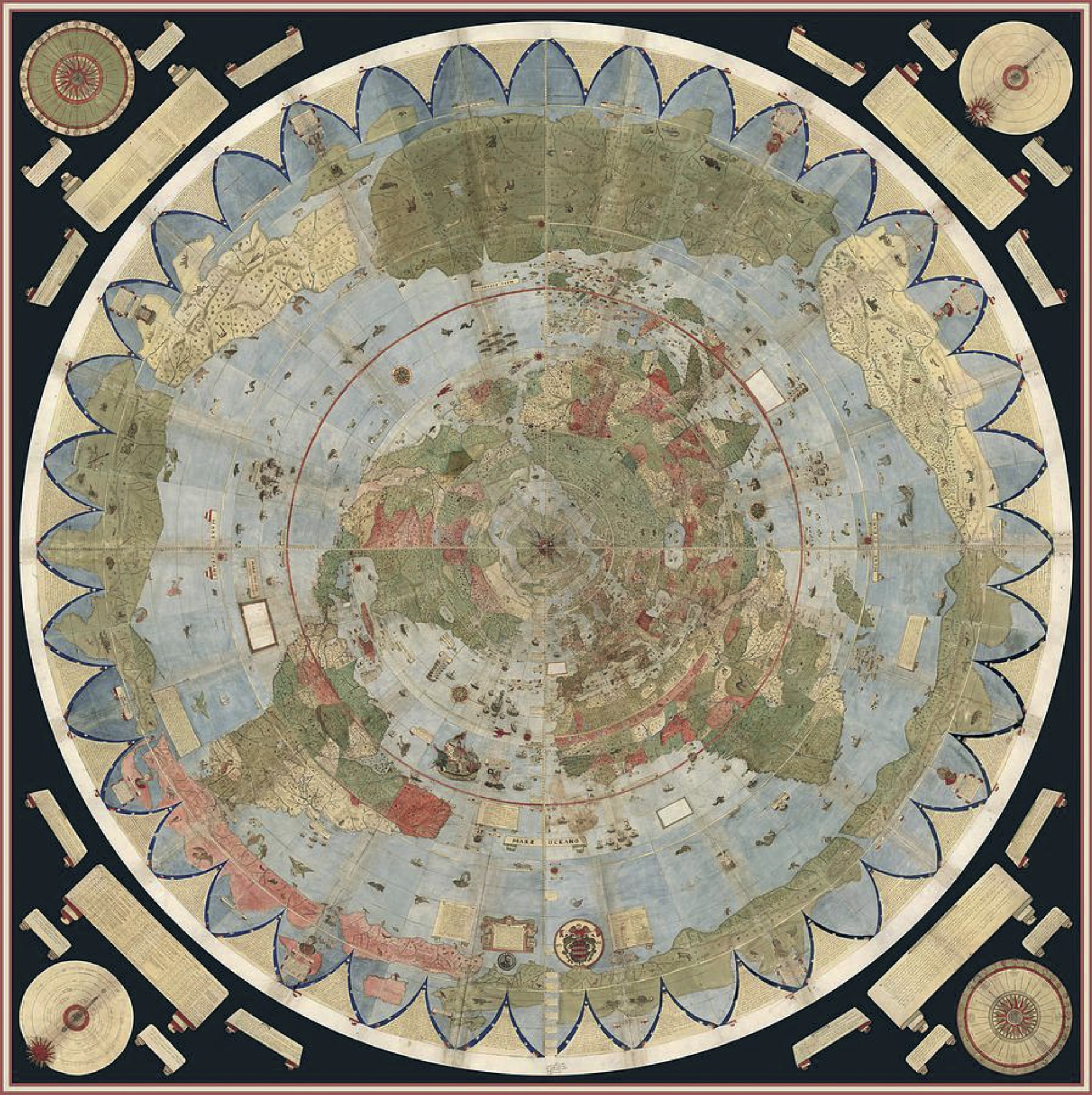 This antique flat earth map is a Studio Grafikka print.

Davidson, who organized international conferences in North Carolina and Colorado with nearly double the attendance, has sympathy for the general brainwashed public. He asks of skeptics only one thing: “Do your own research.”

If there were a Flat Earth motto, that was it. Do your own research. The refrain was repeated in conversations, projected on PowerPoints and printed on bumper stickers sold at merchandise booths (alongside “accurate” world maps, Flat Earth calendars and commemorative coins celebrating this historic conference). The problem with research though, is people are prone to do it in the wrong places, such as universities and planetariums. Mainstream media are dishonest, public schools are overrun with globists and NASA, of course is the enemy. I thought libraries were safe but “you can’t trust books,” cautioned Jeran Campanella. The researcher, whose YouTube channel has almost 124,000 subscribers and 20 million views, explained that the printing press was invented to “get lies into minds.” (The one exception was the Good Book. Several lectures were dedicated to biblical evidence.)

Surely then, I could rely on The Flat Earth Society. As the oldest such organization, established in 1956 by Englishman Samuel Shenton (a sign-maker, amateur cosmologist and Space Race hater) as successor to the much older Universal Zetetic Society, I presumed they were the subject’s authority. But according to YouTuber Rob Skiba (159,000 subscribers) the Society is “either controlled opposition, a hoax or a joke.” Davidson, who runs a 24-hour feed of Flat Earth videos on Celebrate Truth (117,000 subscribers), agreed: “They believe we’re accelerating upwards throughout the universe in a flying disc. It’s the most ridiculous thing I’ve ever heard.

When confronted with these criticisms, Pete Svarrior, a computer scientist and spokesperson for the Flat Earth Society, told me, “We do not normally pay much attention to the smaller and more extreme fringes of the Flat Earth movement.”

Svarrior refused to answer further questions and accused me of trying to “sow discord and division.” He also reprimanded me for having inadequately researched the Society before contacting him. Bromley was right, this is exhausting.

Our conventional knowledge institutions are so powerful and stubborn — and the conspiracy so deep — that it required the brute force of social media to finally expose and undo centuries of propaganda. Thus, research is best done online. In particular, on YouTube. The Canada conference was, essentially, a niche YouTube convention. By the end of the two days, I’d sat through 10 hours of visual presentations. Admittedly, I struggled to understand the significance of their photo-imaging and 3D simulations. After all, I’m no scientist. My tablemate, Chris Cardinal — his eyes hidden below a St. Louis Cardinals cap — helped me make sense of things, frenetically scribbling notes and sliding them across the table with the stealth of a private eye.

“SATELLITES DO NOT EXIST IN SPACE,” read one. “LOOK UP ‘WHAT IF THE EARTH STOPPED SPINNING’ (YOUTUBE). THE PARADOX … THE IRONY … THE HUBRIS!” read another. 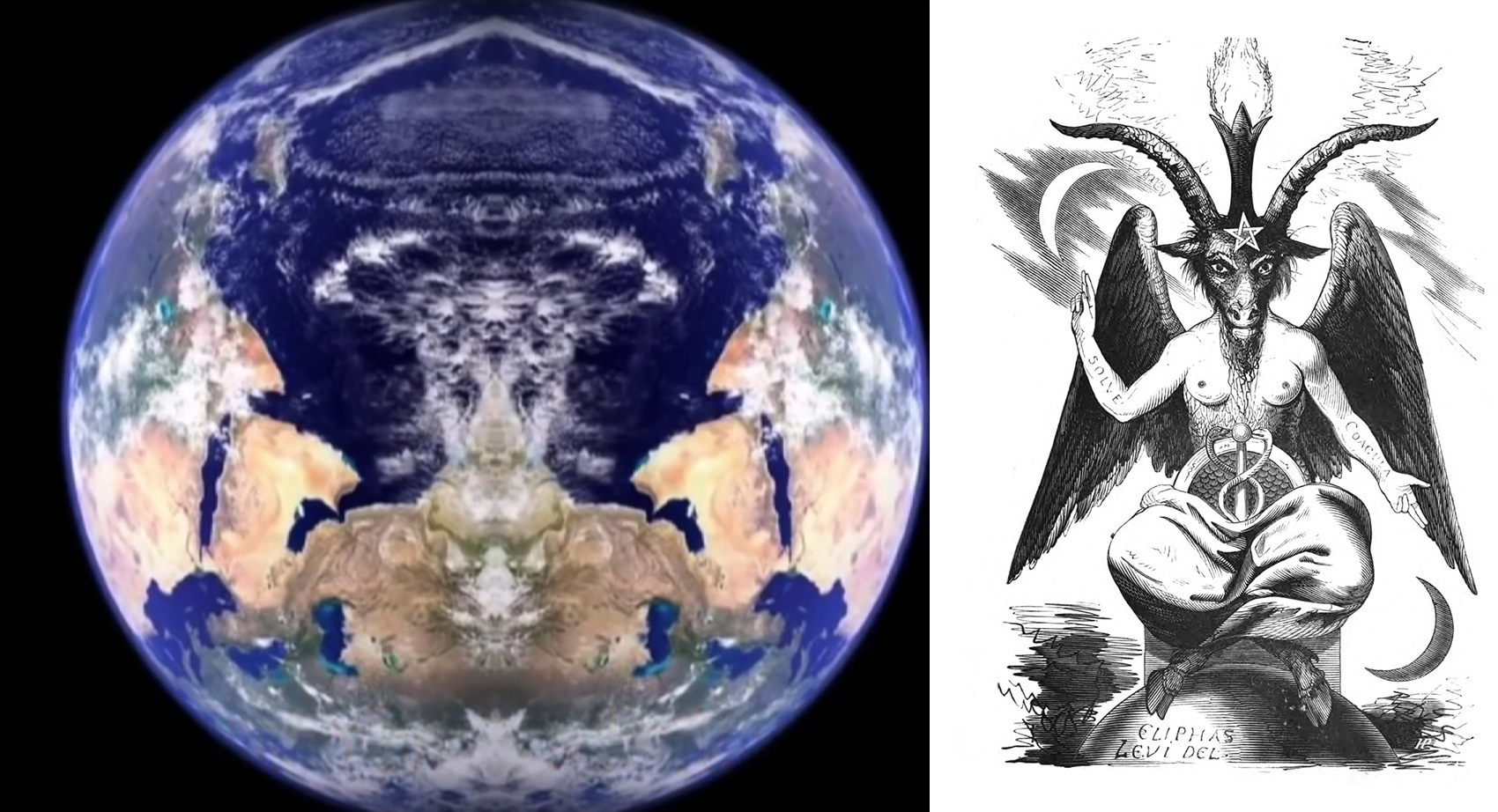 Though I felt buried under jargon like “MEMS accelerometers” and “angular resolution,” the speakers’ confidence sounded convincing. The more I listened, the more intoxicating the possibility of having exclusive information became. But one question remained: Why? What motivated NASA, the UN, Zionists and other co-conspirators to deceive the masses about the shape of the planet — something with little to no bearing over my day-to-day life?

Many conventioneers speculated it was purely power and greed — a controlling device used to turn us into mindless consumers. But while it’s fine and well to speculate, this is a research convention. Thus, I’d only consider theories obtained through science — controlled, observable and repeatable testing.

“Globebuster” Bob Knodel had just the experiment. He pulled the Apollo 17’s famous “fake Blue Marble” Earth photo up on the screen. On his laptop, he mirrored the image like a Rorschach Test, flipped it and mirrored it again. People gasped at the result: continents and clouds now formed the uncanny figure of a demonic creature. It flexed muscular arms comprised of upside-down, symmetrical Middle Easts. Knodel explained his findings and traced what looked like a crown, Masonic Apron and the all-seeing Eye of Providence above the creature’s head.

There you have it: the plot is part of the timeless battle between good and evil. “This is straight-up Luciferian, guys,” said Knodel, sounding somewhat resigned. “This is what we’re dealing with and it is an uphill battle. Believe me.”

Flat Earth 101 first appeared in the January/February 2019 edition of Canadian Geographic. The feature has been nominated for a National Magazine Award in the 'Short Feature Writing' category.