Camaraderie, conversation and conservation are key at the Alpine Club of Canada’s annual General Mountaineering Camp
By Leslie Anthony
With photography by Paul Zizka
May 31, 2019

A scatter of people, a heap of gear, a helicopter, someone plucking a Spanish guitar in the background and singing like an angel ... all swathed in a veil of wildfire smoke as a gentle rain patters down. It’s day one of week six of the Alpine Club of Canada’s 2018 annual General Mountaineering Camp and the big swap is underway — 36 people flying out with baggage, garbage, empty gas cylinders, blisters and sore muscles, and the same number flying in with an even larger load including food and other camp supplies.

Steeped in the history and heritage of alpine exploration, the GMC has been set in a different remote mountain locale each summer since its inception in 1906 — when almost 100 ACC members climbed and explored British Columbia’s Yoho Pass, wore their Sunday best to evening meals and bunked in canvas tents. These days, $2,000 per person will get you space in a modern tent, top-shelf guiding and instruction and outrageous gourmet meals. This year’s edition of the 112-year tradition is at Hallam Glacier in the Monashee Mountains north of Revelstoke, B.C., three bumpy hours from town to the staging area at which we’re now gathered.

From here, the pilot expertly navigates through thick smoke by shadowing valley walls and streams to camp, set high on a moraine near the toe of the glacier. Passengers debark into a marvel of modern wilderness technology, featuring solar panels, rudimentary plumbing, propane kitchen appliances and showers, a portable drinking-water treatment plant, sinks with bladder pumps, comfortable latrines and large tents for cooking, dining, storage, drying and even a library. The rocky surroundings are constellated by some 30 roomy nylon tents for campers and staff. Though occupying a similarly stark setting, it makes Everest Base Camp look like a low-tech ghetto.

In contrast, the glacier hanging above the area mesmerizes on a Himalayan scale, its fractured blue depths exacerbated by the melting snows of late summer. Ringed by mountains, Hallam Glacier requires a 1,200-metre vertical climb before you even think of attacking its surrounding peaks. My body quivers at the thought of how much pain that might entail, while other campers salivate at the prospect.

As with the GMC’s five previous one-week occupants, our group is an eclectic mix of ACC veterans, high-functioning mountaineers and relative novices like myself. The intimidation I feel is real, but I’ll get over it. After all, challenging oneself is the point of mountaineering. 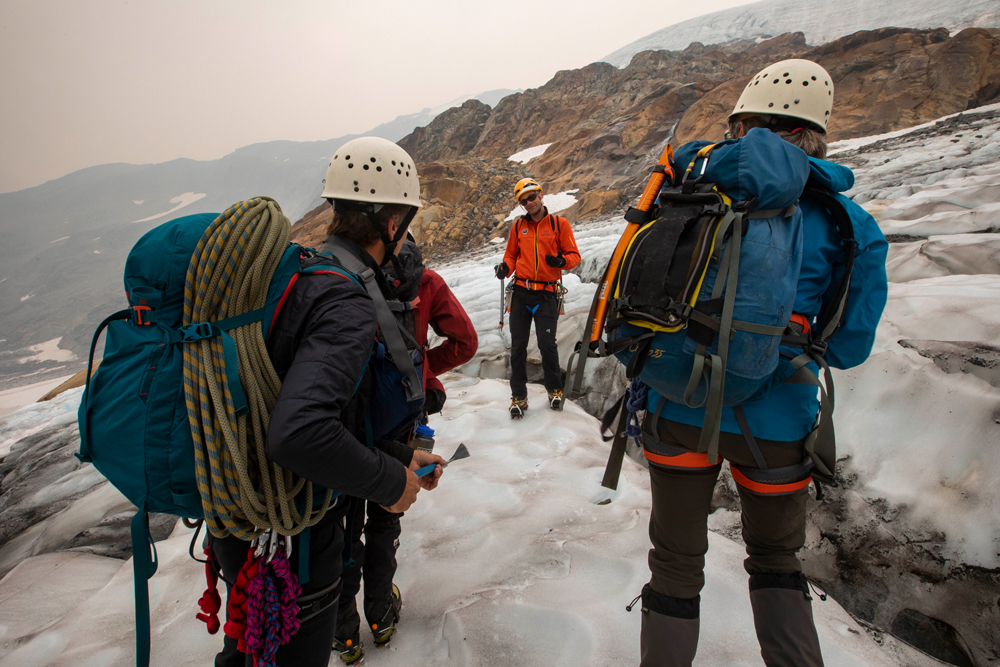 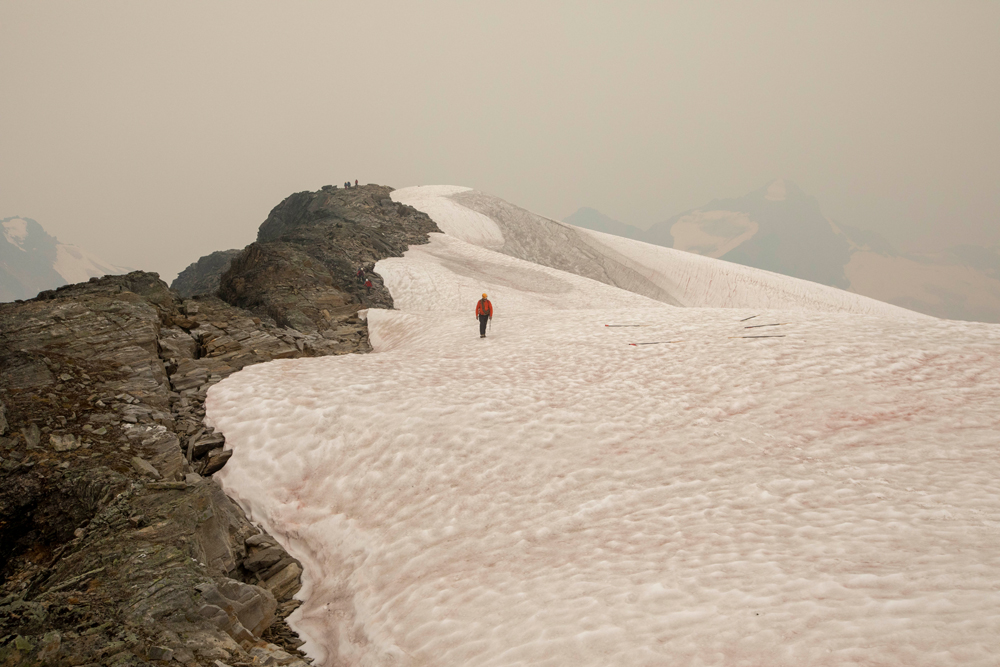 Top: Mountaineers get instruction in navigating crevasses on the rapidly melting surface of Hallam Glacier. Above: Guide Matt Mueller walks on the glacier, which bears ripples of “watermelon snow” — an algae bloom that occurs in alpine environments.

The storm hits around 2 a.m.: spectacular lightning, driving rain, howling wind, little sleep. Nonetheless, by 6 a.m. the dining tent is buzzing with folks who can’t wait to get at it. It’s weird to see so much enthusiasm at a time of day when most of us are zombies awaiting our caffeine fix — but it’s also contagious.

I’ve joined the “skills group” today — people looking for refreshers in simple rope work, rock climbing, and glacier travel. (Each preceding evening, campers sign up for a range of excursions for the following day.) After an organizational talk, the skills group heads out with amateur guides Jesse Milner and Bree Kullman, crossing the valley to a wall of glacier-polished rock hung with a 120-metre curtain of water whose echoing cascade provides perfect white noise for sleeping. We cross a stream on a rope-and-ladder bridge, pick our way through rocks to the wall and harness up (“transition,” say the guides) to begin the slow ascent through a system of ledges (or “rock step”). Safety ropes have been fixed in places where exposure is an issue and suddenly “situational awareness” becomes key. At some spots a fall could be fatal.

Eventually hands-on rock climbing is required, and we rope up as a team. After Milner ascends and sets an anchor, we follow, 10 metres apart. The rock remains greasy from last night’s rain, but it doesn’t take long to clip around the first protective bolt and move upward. At the top, we spend an hour hiking over a steep ridge to Iceberg Lake, unsurprisingly dotted with icebergs calving from a rapidly retreating glacier. On the ice proper, we rope into teams, donning crampons and ice axes for walking. At the glacier’s headwall the real clinic begins, as we practise setting and retrieving ice screws and self-arresting falls down a snow slope with the axes.

As per mountaineering dogma, we turn around at 1:30 p.m. Each group returns sore but in good spirits and lounges outside the tea tent. Snacks and beer and stories spark the familiar camaraderie of the mountains — one of the reasons so many ACC members attend these camps year after year.

Shokoples introduces the GMC storytelling tradition, donning a feather-adorned Tyrolean hat for the task and relating how a visiting National Geographic TV crew once went out at noon with a guide for some quick shots only to find themselves still on the mountain at midnight. This tale of media sandbagging prompts much laughter around the room — and not a little bit of worry from myself.

Afterward, I take my first crack at communal dish duty, an industrial enterprise of several hours requiring six people to execute washing, disinfecting, rinsing and drying. By the time I get to my tent I’m asleep before I can pull the zipper down behind me. 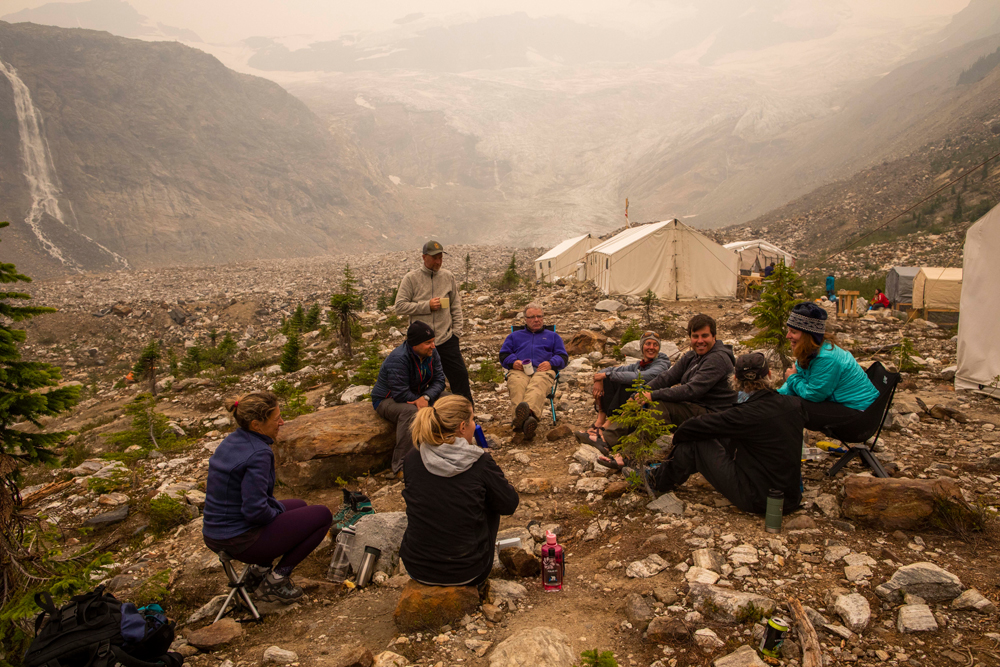 Swapping stories in the smoke at GMC base camp.

The next day, groups that signed on for big objectives wake at 4:30 a.m. and leave camp within the hour. With bruised feet from my shakeout climb in rental plastic mountaineering boots, I’ve decided on a lighter day of hiking around camp in my own well-broken-in footwear.

The climb to the Hallam’s high moraine starts just behind camp and heads straight up. At the top, the trail meanders upward through the preternaturally green meadows of “Waterfall Alley,” a chunk of bucolic lushness in an otherwise stark alpenscape. Here, water braids thinly over at least four different kinds of rock, highlighting the multifarious folding and buckling the Monashees are famous for. Heading up a gully, I stick close to the shaded wall to avoid rockfall, then traverse onto the moraine. The trail, marked by rock cairns, now steepens significantly. At the top cairn, the view to Hallam Glacier is stupendous.

Far below, poppyseeds dot its toe — a crew of University of Alberta students on an outdoors course practising crevasse rescue. I can also see across the valley to Iceberg Lake and the route traversed the day before. Such constantly evolving perspectives of mountains are one of the best features of travelling in them.

On the way down, I meet another lone traveller. David Hik is a terrestrial ecologist from Simon Fraser University and long-time ACC member teaching a module for the University of Alberta course. He’s scouting places to bring the students and we sit on a rock to watch a ptarmigan family and talk ecology; climate change — whose effects are starkly visible here in melting glaciers, lowering water tables, wildfire smoke and changing ranges of plants and animals — dominates our discussion. The only comfort we take is knowing that when it comes to climate awareness, this is a classroom par excellence: “Mountains breed curiosity,” says Hik. “The curious are environmentally conscious, consciousness begs information and information fosters concern.” 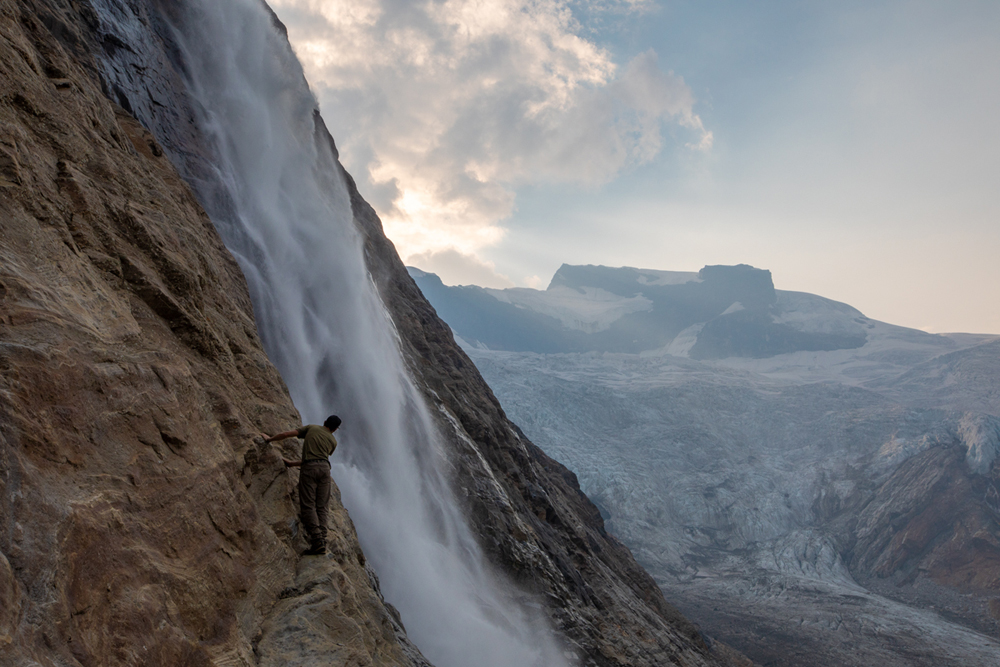 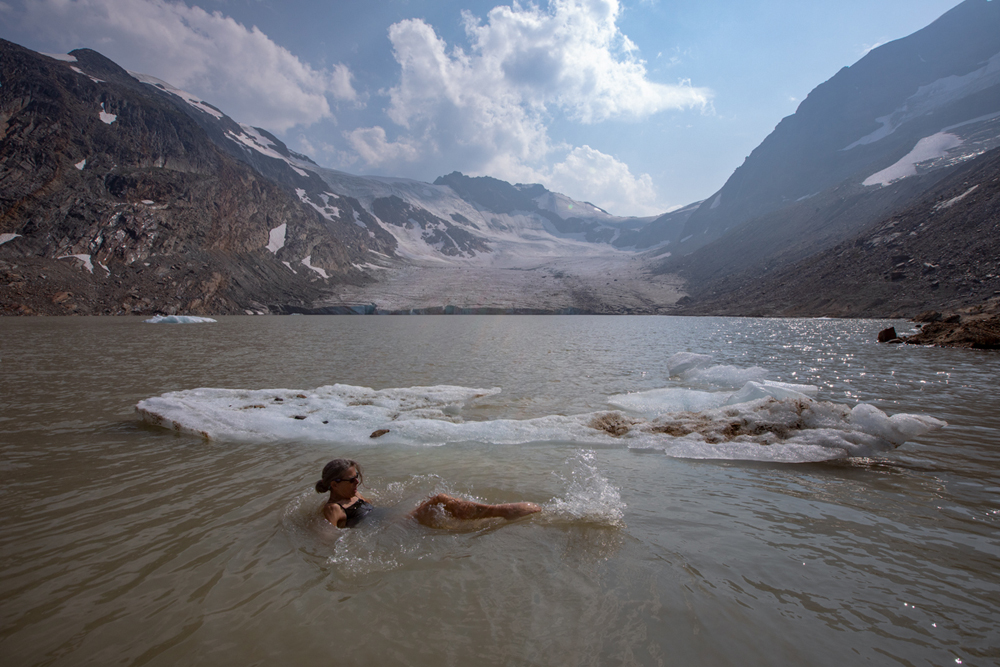 Top: Amateur guide Jesse Milner leads the way across a glacier-polished rock wall with a cascading waterfall. Above: A mountaineer paddles in the aptly-named Iceberg Lake, below Hallam Glacier.

Back at camp, as climbers return, reports of conditions come with them: crews aiming for the big peaks above Hallam Glacier couldn’t solve the “The Riddle,” a reticulation of crevasses on its rapidly melting surface, and had to turn back; another group that struck out for Wiser Peak is moving slow and won’t be back before sundown. It’s all grist for the guides in figuring out the next day’s offerings.

Still nursing blackened toes, I’ve signed onto something moderate — a climb to the 2,400-metre-high Bombay Peak. Though the first night’s thunderstorm briefly cleared out the smoke, the province’s abundant wildfires — including new ones sparked by the storm — have made themselves known again. A blood-red sun hangs in a thick gauze of smoke that worsens as the day wears on.

Sovdat and amateur guide Peter Findlay leads my group up the same rock step I’d climbed previously. Despite involving a larger group — including the extended Hamilton family of seven from Barrie, Ont. — the climb goes quicker than the first day, and we gather at the top to angle up a tumble of slick, heavily glaciated rock. As we scramble up a tricky section someone yells “Goat!” and we gaze up to see a huge male perched on a promontory, ears twitching away flies, staring us down in curiosity. Even when we close to within 20 metres it doesn’t move, as if it knows our route will take us around him. Rob, the 73-year-old father of the Hamilton clan who has suffered two heart attacks and stole the storytelling show at dinner the first night with a spirited “In reality, I shouldn’t be here” soliloquy, now seems as comfortable on this rock as the goat.

We climb onto a balcony abutting glacial ice, then step onto its surface. This glacier is dirty and heavily crevassed, so we follow these laterally until we hit a main gully we can head up without much worry. The higher part of the glacier surrounds Mount Joy, little more than a tiny nunatak, or exposed peak, from this distance, but we’re heading in the opposite direction, toward the col between Bombay and Wiser peaks. 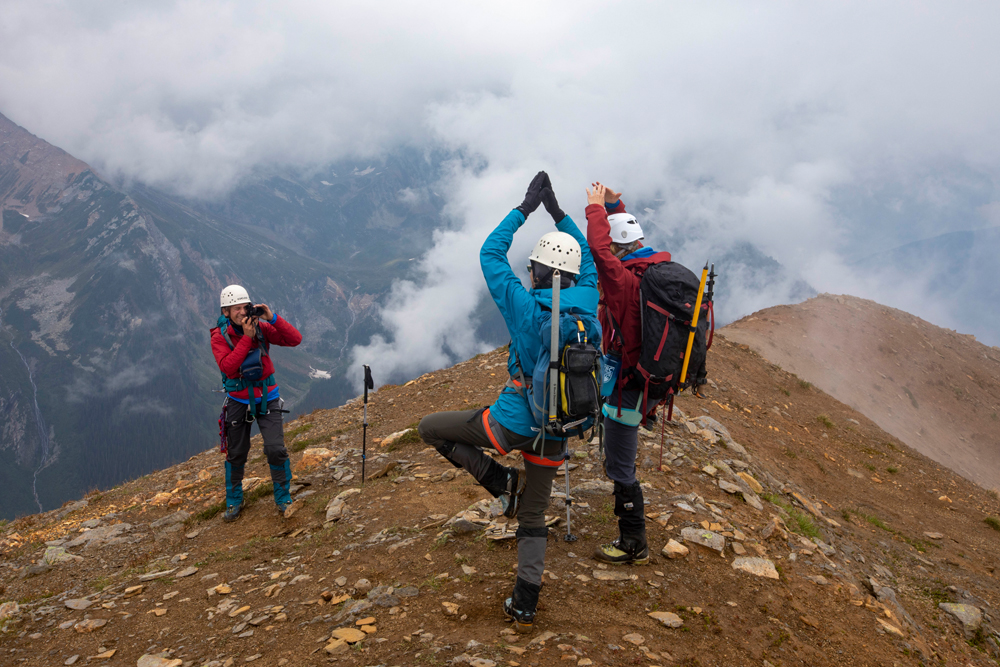 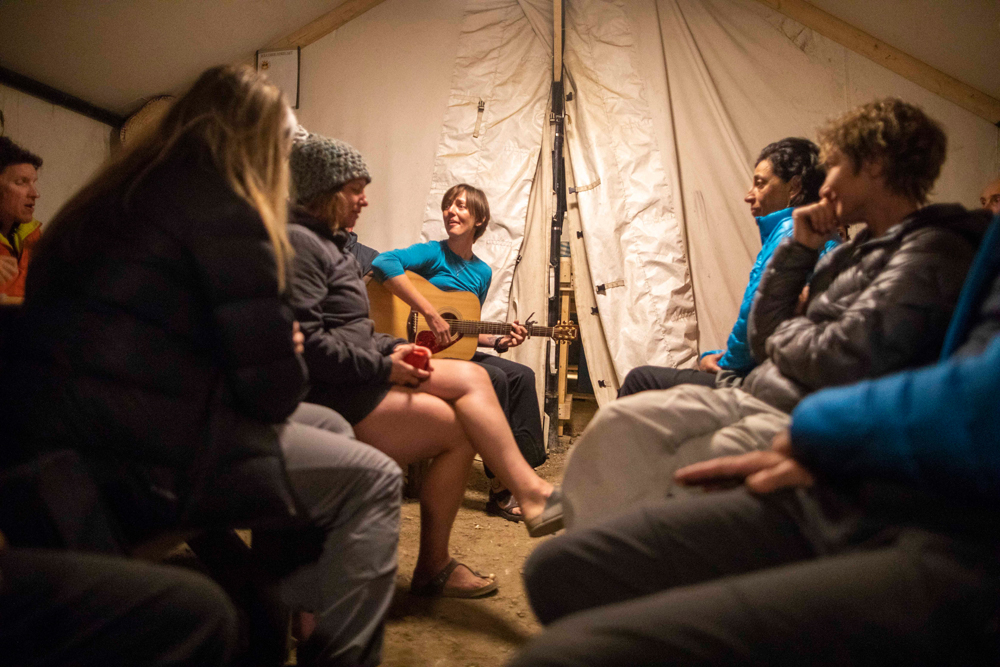 Top: Climbers pose for a photo after a successful summit of Bombay Peak. Above: Bree Kullman plays the guitar for guests at base camp.

Near the end of the slog, Sovdat punches through collapsing snow into a small crevasse, gingerly reversing her steps and poking around to find a more solid route. We skirt the crevasse and, a few tired steps later, step off the ice and collapse onto the rock of the col. Sovdat checks her watch for the time. “Four hours — that’s great time,” she says, surreptitiously re-energizing the group.

From there, it’s 20 minutes along a spectacular ridge to the summit of Bombay and impressive views in every direction — though we can see little more through the smoke than the fractured glacier we’ve just climbed.

At dinner that evening, more stories are shared. When it’s the guides’ turn to reminisce on previous GMCs, Sovdat tells the story of her first, when they hiked in 20 kilometres but the helicopter carrying their gear didn’t show up because the pilot got lost. The group spent the night out around a fire, but in the morning, despite little sleep, everyone still wanted to climb. “These people were all so keen, so committed and so strong,” she says, “that I wanted to capture that energy. I knew I wanted to be a part of this world.”