The voices we pay attention to

What can we learn when western science and traditional knowledge intersect?
By Emma Hodgson and Arlyn Charlie
July 16, 2020

This article has been written in two parts, in the words of each author.

I am a fisheries ecologist based the Fraser Valley, British Columbia. I have been thinking a lot about the voices that we hear from, and the voices we elevate. Perhaps never more so than in recent times, but this is an ongoing issue and something relevant to my work as a Canadian scientist.

Three years ago a colleague, Rachel Hovel, and I started a fisheries research project with community members and researchers in the Gwich’in Settlement Area of the western Canadian Arctic. This region includes four communities along the Mackenzie, Arctic Red and Peel rivers, all of which fish for łuk dagaii, the Teetł’it Gwich’in word for broad whitefish, commonly called “whitefish” in the area. We started this work after meeting community members a number of years previous when a paddling trip ended in Fort McPherson (Teetł’it Zheh), and finding that western science approaches could contribute to learning some important information about this species. We have completed three years of field work and will enter into a fourth this summer, though scaled back because of the safety concerns during the pandemic. 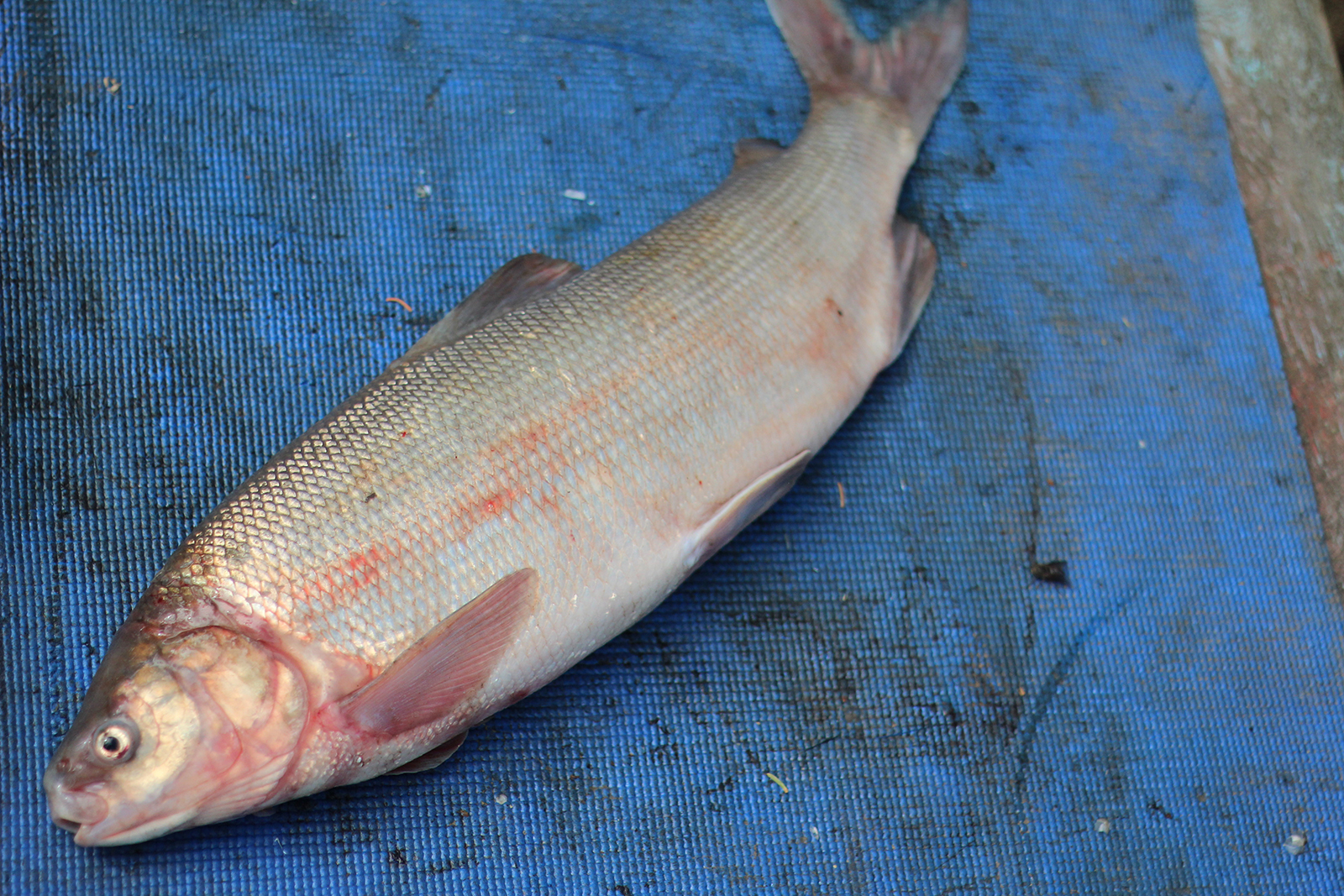 Throughout this project, community members have taught me many things. I have learned to look for the flatter belly and square pectoral fin base to tell a male from a female fish. I have learned how to slice fish for dry-fish, so that it dries consistently for preservation over the long winter (though this is an art I am far from practiced at). Most of all, I have learned how much I still don’t know.

I have been fortunate to have the incredible opportunity to learn cultural and ecological knowledge from our Gwich’in collaborators, and it has made me think more about the voices that we hear from, and listen to. You have heard from folks like me before.

Now I invite you to hear from one of my teachers, Arlyn Charlie. Arlyn grew up in Fort McPherson and his Jijuu (grandmother) has been a mentor to me in my work in the community. 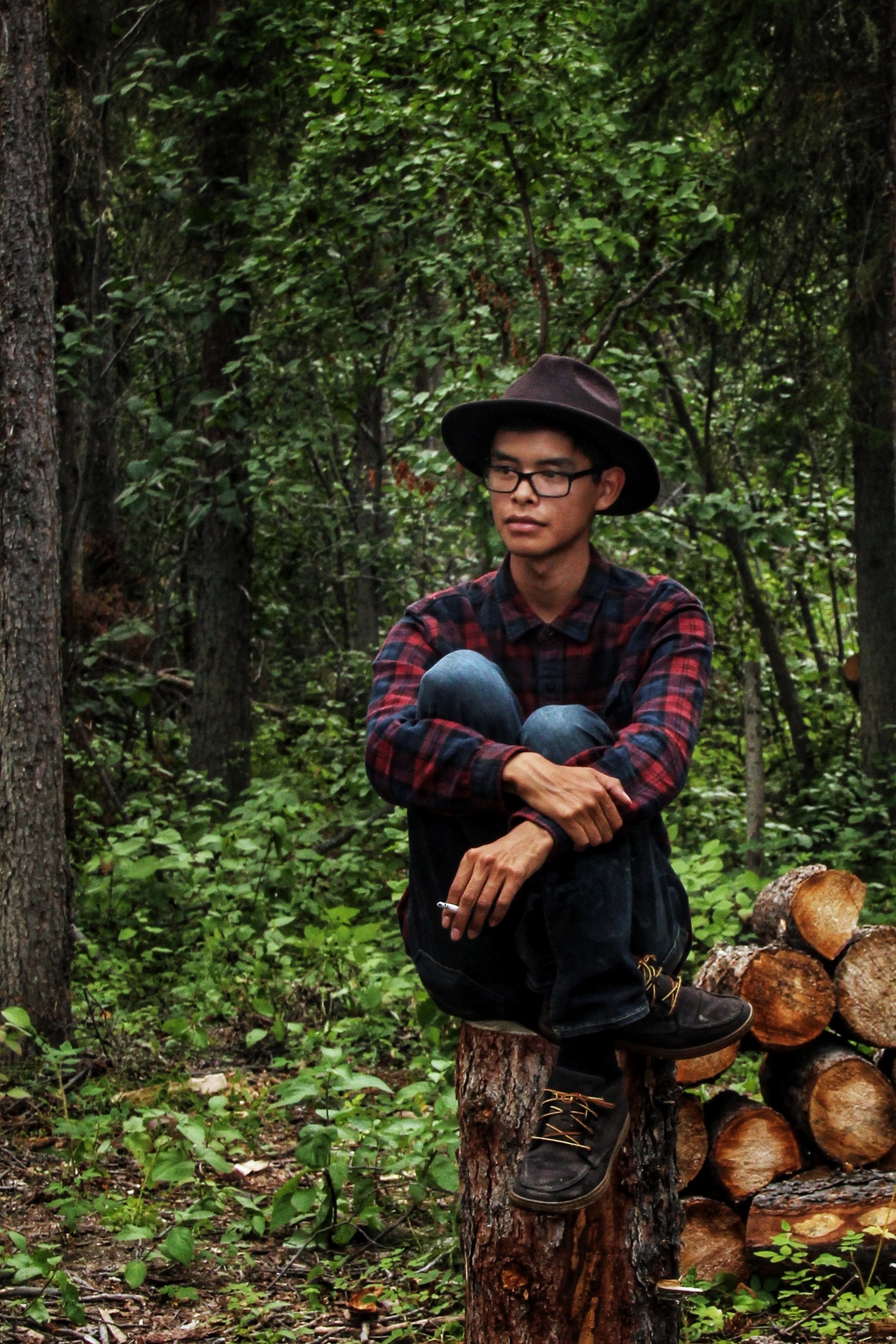 I sit here at my Jijuu’s fish camp and watch the landscape. I watch as the sun moves down to the horizon, watch as reds and purples reflect on the water, watch as the river flows past. I sit here, with a cup of tea and a cigarette in hand, and think. I think about the vast amount of history that this river holds. This river holds a story. My grandparents have travelled this river, navigating its twists and turns, its currents and sandbars, as their parents did before them. For thousands of years this place has been our home.

This beautiful land can be harsh. Looking back, I am amazed at how resilient my people were, including surviving the -40°C winters (which sometimes even dropped down to -60°C). They not only survived but thrived here, the place that the Teetl’it Gwich’in People call home.

Life back then must have been so simple; simple, but not easy. They followed the traditional migratory patterns of animals throughout the year, out amidst the trees and mountains not knowing if they were going to be successful in a hunt. Yes, there are stories about the prosperous times, but that does not come without the stories of hardship. That was their life, their story.

Since I started my work capturing the Gwich’in culture, language, traditions, and practices by listening and through the lens of a camera, I discovered one word that sums it up: Gwandak. Gwandak is the Gwich’in word for story but it means more than that.

Gwandak holds more depth than the mere idea of a story that you might think of. Gwich'in stories were not preserved by pen and paper, but through oral tradition. Gwandak holds the depth of those stories. All the knowledge my ancestors had about the land, the history, and the teachings were passed down from generation to generation by telling stories. And those stories were not simply to pass the time. Gwandak were told to pass along teachings. Teachings which tell us about the land, thus granting us the necessary skills and knowledge to survive. This depth in gwandak allows me to know, capture and preserve this information for the future.

This gwandak is not something one can learn overnight. I have been coming up to my Jijuu’s fish camp since before I could remember. Year after year I have tried to make uutsik (dry-fish) from the whitefish, only to have the end product come with numerous holes, incapable of even hanging to dry. Year after year I practiced. Now, I look at my uutsik drying in the smoke house, with no holes and the proper thickness so that it won’t spoil. Now I know, like the process of making uutsik, patience is key — patience in the sense that we must keep trying in order to improve. 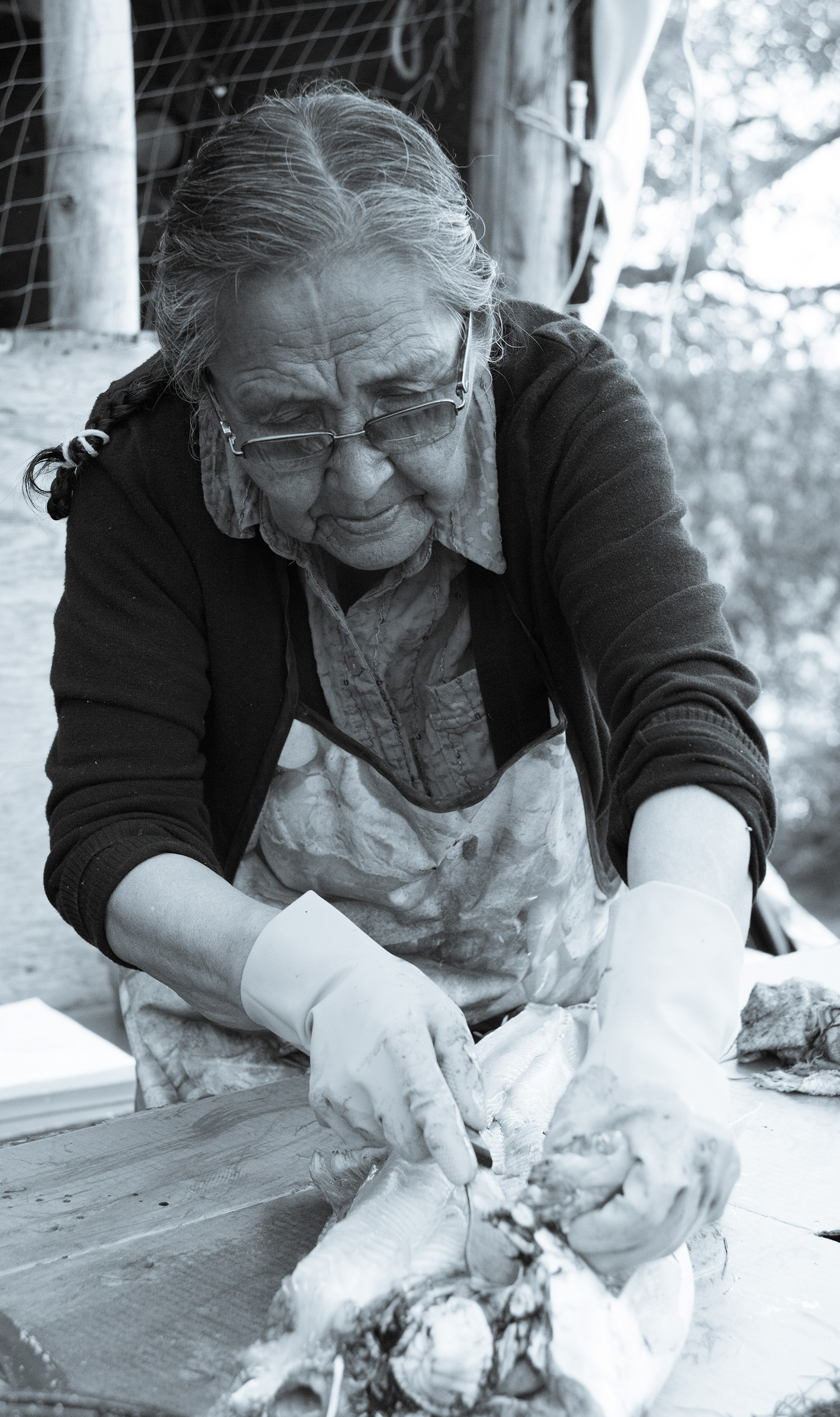 Shitsuu Mary, uutsik ahtsii: My grandmother Mary is making dry-fish. During the month of July, people move to their camps situated along the Peel River to set their nets in the river to fish for the whitefish that moves upriver. Photo: Arlyn Charlie

I sit here, thinking about the past and the lives that my people have lived, and what that means for the future. I enjoy my time working with researchers like Emma, Rachel, and Tracey, who are more like friends than colleagues. I am amazed that they came up here and immersed themselves in our culture. They possessed a willingness to learn, even something as simple as each of them attempting to make uutsik.

I sit here wondering about the gwandak, the stories of my people, the teachings that they hold, and what they mean as the land changes around me, with climate change and the landslides that fall into the river. The channels that we follow on the river are now becoming shallow, and the animals are no longer using their migratory paths as they did in the past. 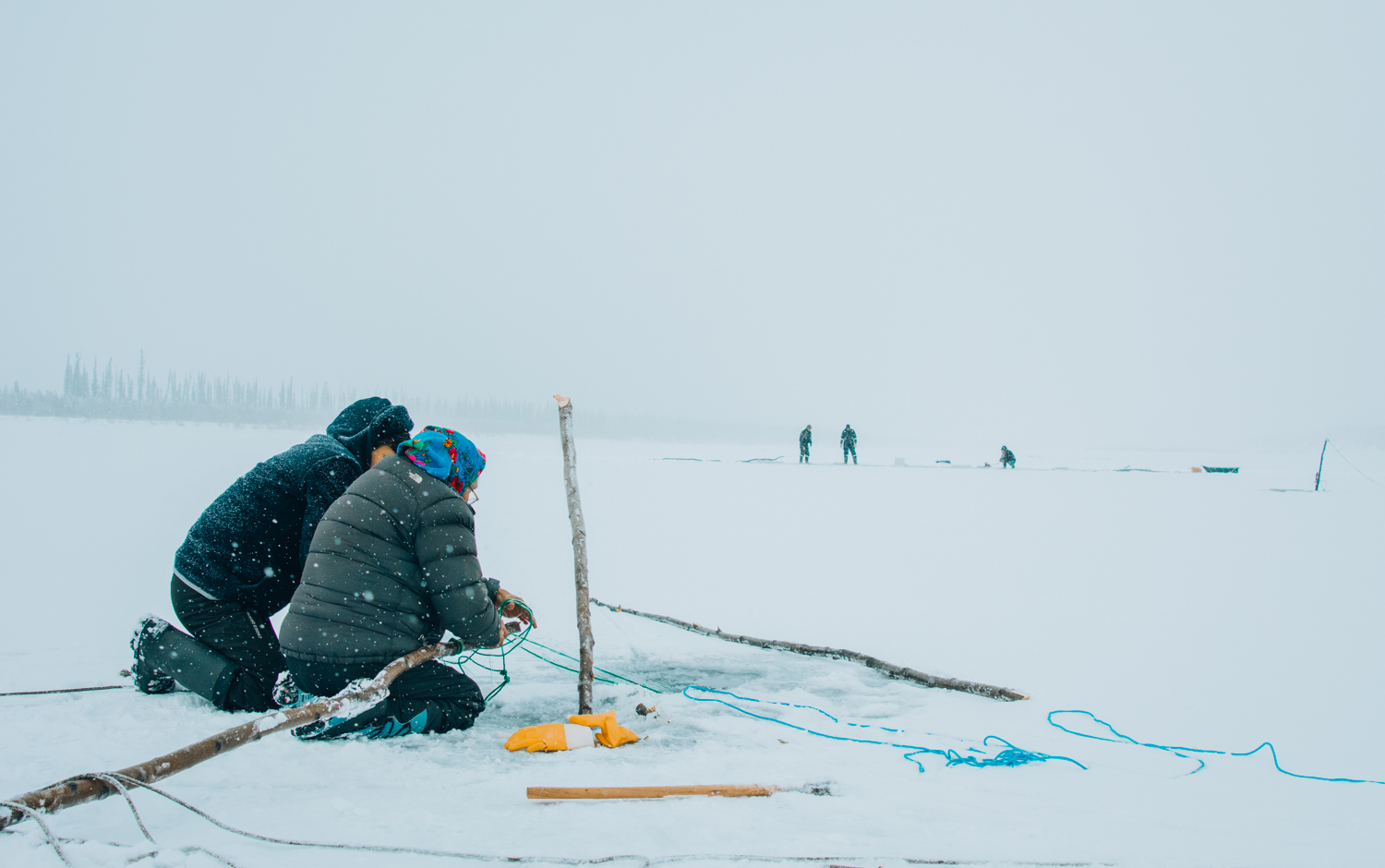 October nat tan t’eh chihyvah chihnashuh: Set net under ice in October. After the Peel River freezes over, during the month of October, people set their nets under the ice as the whitefish now move back downriver. (Photo: Arlyn Charlie)

Truthfully, the only honest answer I can provide is: I don’t know. What I do know is that this land I sit upon is constantly changing, and that affects the patterns my people once followed. The caribou are now unpredictable, the fish can come early or late, and the winter snows cover the ground later than in the past. The ice on the river forms later and melts earlier.

I commend the researchers who venture out on this land all for the means of gathering data and documenting the changes we see today. But more especially, I commend those who take the time to learn about the lands they live and work on, who make an effort to learn about the lives of the people who live there and who work towards merging western and traditional knowledge together. And, I call on visitors to learn about the intricate story of the Teetl’it Gwich’in, whose lives will be greatly impacted by the changing of this land, if they have not already.

What does the future hold? With the world constantly changing around me, will I have any recollection of the land upon which I now sit? Will the gwandak that I preserve be useful in the future? Or would it be something to only look back on with a sorrowful heart? To look back and see what we once had and now have lost?

The work discussed here was part of Emma Hodgson's Liber Ero Fellowship research at Simon Fraser University. Dr. Hodgson focuses her research on understanding how human activities impact fish and their habitats in freshwater systems. She is now a research scientist with Fisheries and Oceans Canada.

Based out of Teetł’it Zheh (Fort McPherson, N.W.T.), Arlyn Charlie works with the Gwich’in Tribal Council Department of Cultural Heritage, documenting and preserving various aspects of the Teetł’it Gwich’in People. He often uses photography and writing as a means to share the traditional Gwich’in language, culture, and practices.