At least 50 species of fish can be found in the Arctic drainage basin in Ontario
By Constance O’Connor and Meg Southee
May 17, 2021

The far north in Ontario has innumerable lakes and thousands of kilometres of rivers crisscrossing a landscape that is as much water as land. In fact, some of the world’s last large free-flowing rivers – including the Albany, Winisk and Severn – wind their way across this landscape and carry its abundant freshwater north toward Hudson and James Bay.

For freshwater fish, this area is an aquatic haven. We know that at least 50 species of fish can be found in the Arctic drainage basin in Ontario – the largest area of high freshwater species diversity and low levels of environmental disruption in Canada. But exactly where those fish are is something we know a lot less about. And that matters, because Canada is committed to protecting 30 per cent of its freshwater and land area by 2030 in an effort to address the global biodiversity crisis. If our protection efforts are to be effective, especially in globally important areas like the far north in Ontario, they must focus on places that will benefit biodiversity, and where human communities will support them today and in the future.

Right now, we have a critical window for proactive planning for the protection of ecological and social values in this wild area ahead of impending developments – there are multiple major mining and infrastructure projects, including all-weather roads, being proposed for the far north. The problem is that scientific data is scarce across this vast area, especially for fish. As field scientists, we have no problem spending hours in tiny planes searching for animal tracks or getting our boots muddy doing fish sampling work at lake level. But it can take days to sample just one lake, and so getting a picture of what fish were where in the tens of thousands of northern lakes was clearly going to require a different approach. 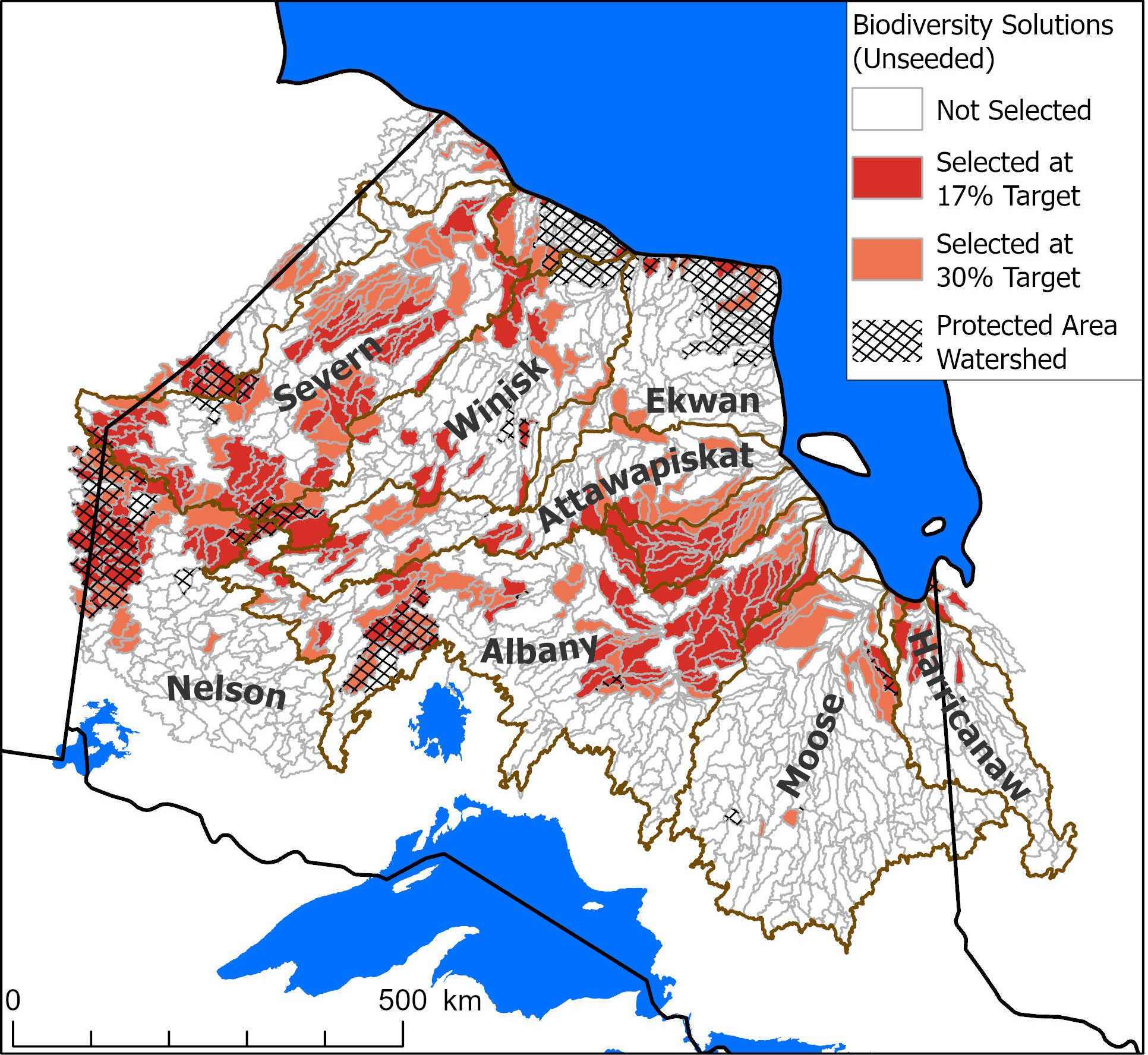 The priority areas for freshwater fish biodiversity in the Arctic watershed in Ontario.

So instead of looking directly for fish, we decided to work on predicting which fish might be where. To do that, we needed to look at fish habitat – the places that fish need to feed, overwinter and reproduce – which, in turn, depends on climate, topography, freshwater quantity and quality, and connectivity between water bodies. We compiled information on climate, elevation, and hydrology across the Arctic drainage basin and then examined almost a century of scientific fish sampling records, finding as many records as we could that documented where fish species had been caught over the years, to determine species habitat preferences. Finally, we undertook some statistical matchmaking of fish and available habitats to predict where 30 species of freshwater fish were likely to occur across this enormous watery landscape.

The resulting maps gave us a good idea of the watersheds that were likely the most important for freshwater fish. However, we wanted to go a step further, and so we used computer algorithms to identify watersheds that are not only the most important for freshwater fish, but also ones where industrial disturbance was the lowest. Finally, we also factored in connectivity between waterways, an important element for fish that migrate or that need room to respond to climate change. It’s also important because water quality in upstream areas affects downstream areas – it’s all connected. We looked at the places that are the most important for overall biodiversity, then used our algorithms to additionally zero in on four fish species that are culturally and ecologically important – lake sturgeon, brook trout, lake whitefish and walleye. 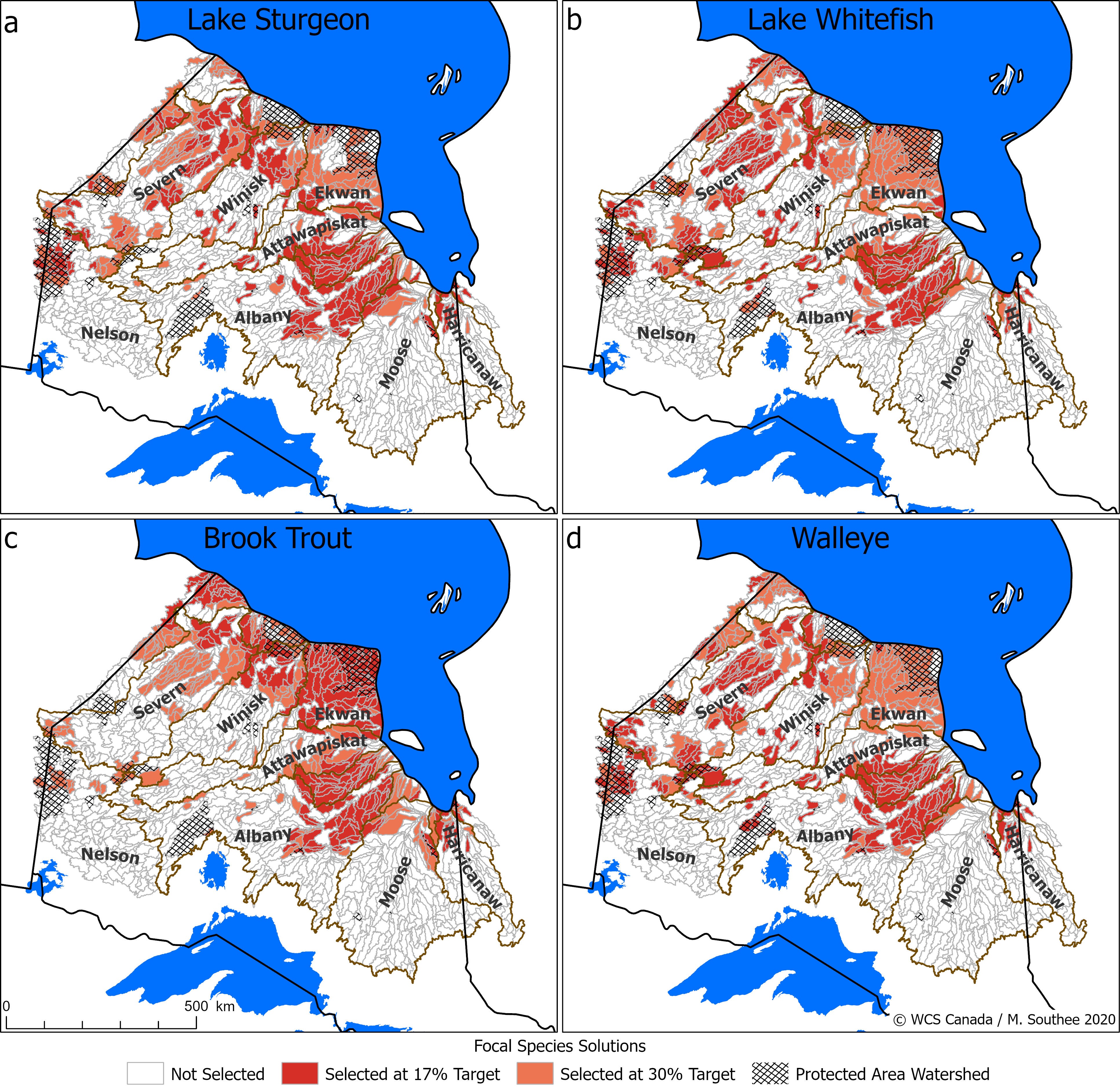 Importantly, our results closely aligned with areas that have already been prioritized by First Nations as part of Indigenous-led conservation efforts in northern Ontario. Kitchenuhmaykoosib Inninuwug (KI) have proposed an Indigenous Protected Area in the Fawn River watershed, as part of the KI Water Declaration protecting 13,025 km2 of boreal lakes, rivers, forest, and wetlands, including Kitchenuhmaykoosib Aaki (Big Trout Lake). Both the KI Water Declaration and the proposed Indigenous Protected Area are protected from any activities that harm the community’s relationships with the land and water under Natural Laws upheld by KI. Similarly, Moose Cree First Nation declared that the Kah-pana-yow Sîpi or Meh-ko-pwa-meh-ŝtik Sîpi (the North French River) watershed within their traditional homeland is protected from development. The majority of both the Fawn River watershed and the North French River watershed were also identified as priority areas for freshwater fish in our analysis. These results demonstrate how scientific research can support Indigenous-led conservation efforts informed by traditional knowledge.

But while our research approach proved effective in identifying key areas for freshwater biodiversity, it will take more than maps to protect these areas on the ground and benefit communities. Implementing lasting protection, especially across a vast undeveloped region such as the far north in Ontario, will require, among other things, giving precedence to Indigenous-led protection and local stewardship of the land, waters and wildlife.

In short, it took innovation to find the most important areas for fish in this vast blue-veined landscape. It will also take innovation to protect them.