Tracking wildfire impacts at the top of the world

When a wildfire rages through a forest in Northern Canada, Alaska or Russia, prevailing winds blow its toxic emissions north to the Arctic. As climate change brings warmer, drier summers to the world’s boreal forests, fires are getting bigger and more frequent. What does this mean for the atmosphere at the top of the world — and for the rest of the planet? Erik Lutsch, a PhD student in the department of physics at the University of Toronto, is part of a team that’s looking for the answers.

Thousands of kilometres north of the nearest tree, Lutsch sets up the spectrometer he’ll use to scrutinize the polar sunlight for chemical traces of burning forests.

In February, just before the sun returns to the High Arctic, Lutsch and his atmospheric research colleagues fly north to the Polar Environment Atmospheric Research Laboratory (PEARL) at Eureka, Nunavut. There, thousands of kilometres north of the nearest tree, Lutsch sets up the spectrometer he’ll use to scrutinize the polar sunlight for chemical traces of those burning forests.

The spectrometer, the farthest north of its kind in the world, collects high-resolution data from the infrared portion of the solar spectrum. It can take measurements well beyond the Arctic capabilities of satellites, which collect most of the planet’s atmospheric data. “The Arctic is a difficult region for satellites to measure,” says Lutsch.  “They generally look straight down at the Earth’s surface — but snow and ice reflect sunlight and the Arctic is often cloudy, so you don’t get a strong signal. Our instrument, in contrast, looks directly at the sun and provides very clear information that you couldn’t get from a satellite.”

The roof of the PEARL facility’s Ridge Lab (left) and a view of the interior of the spectrometer dome. (Photos: Erik Lutsch)

Lutsch measures gases such as carbon monoxide, hydrogen cyanide, formaldehyde and ammonia in the Arctic atmosphere, which are most abundant up to an altitude of about 10 kilometres. “These gases are associated with wildfires,” he says, “and they have negative impacts on air quality.”

Lutsch and his colleagues spend most of their three weeks at PEARL working on their instruments, which will continue to operate after they leave, but they also make time to get outside and explore. Part of Eureka’s appeal, Lutsch says, is its remoteness: the nearest community, Grise Fiord, is about 500 kilometres away. “You’d think it would be quite isolating, but it’s not,” he says. “It’s a completely different landscape, quite serene. When you’re outside you hear nothing but the wind. I feel lucky to have had the experience of going there.” 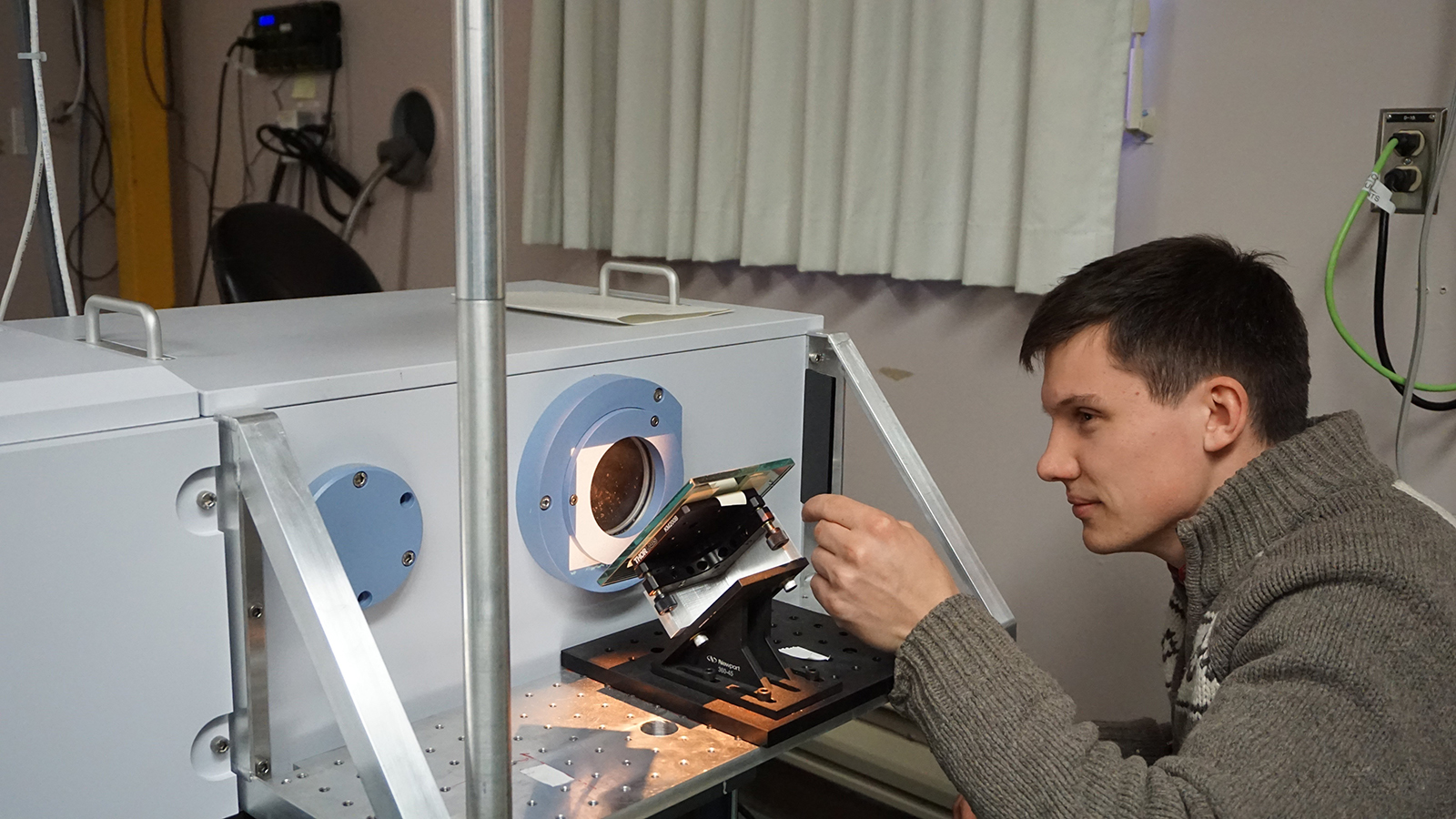 Lutsch performs an alignment check of the solar beam on the spectrometer’s input aperture in the PEARL complex. (Photo: Erik Lutsch)

Lutsch’s unique data from the High Arctic is helping researchers learn how fires affect air quality and climate. It’s also an essential link in the worldwide network of environmental monitoring by scientists from many disciplines who are striving to understand the Earth’s complex interplay of atmosphere, land, oceans, snow, ice and living organisms, and to design computer models to predict how these relationships may change in the future.