Université Laval and the University of Toronto both have teams that have won the prototype gasoline category at past Shell Eco-marathon Americas
By Tanya Kirnishni
April 7, 2017

If history is any indication, two Canadian teams are gearing up for what is expected to be another close competition at Shell Eco-marathon Americas 2017, taking place April 27-30 in Detroit, Michigan. Alérion Supermileage from Université Laval and Supermileage Team from the University of Toronto have both previously taken top spots in the prototype gasoline category for fuel-efficient vehicles.

“It’s great to be able to measure yourself against other teams and show what you’ve done, but also to see the progress you’ve made,” says Étienne St-Pierre, team lead for Alérion Supermileage, the reigning champions. “What we’re trying to show with this project is that it’s possible to do less with more.” 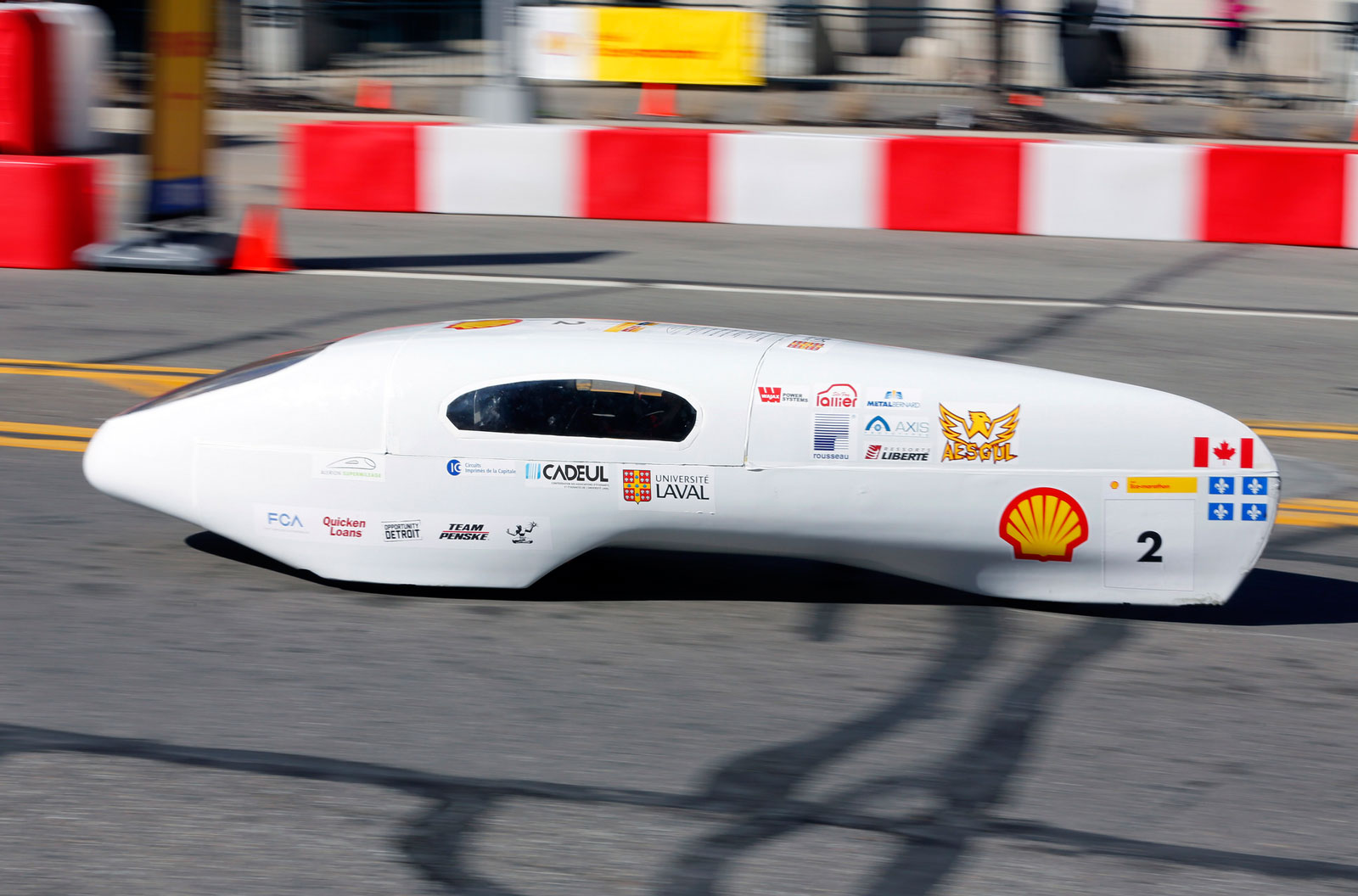 The CT 2.0, a prototype vehicle from team Alérion Supermileage from Universite Laval in Quebec, on the track during day three of the Shell Eco-marathon Americas in Detroit, Saturday, April 23, 2016. (Photo: Rick Osentoski/AP Images for Shell)

“The one thing that led to our success was that our team members pursued the research phase of our learning very passionately,” says Mengqi Wang, Supermileage Team co-leader and project manager.

Her team didn’t make a successful run their first year, but they learned from that experience and took second place the following year. They custom-built an internal combustion engine tailored to the specific requirements of the competition, accounting for the size and weight of their vehicle, driving strategy, and the power output required for the type of track they competed on.

“The competition was extremely exciting because we did so well after not even placing at all the first year,” says Kristine Confalone, who co-manages the Supermileage team with Wang. She handles funding and sponsor outreach, and drives the team’s gasoline prototype. Confalone was initially recruited as a driver because she is only five feet tall, making her an ideal fit for the lightweight vehicle.

“It’s a little scary actually because I’m almost lying down — it’s a weird perspective,” says Confalone. “The car is extremely light, it weighs just over 70 pounds, so it’s very susceptible to the bumps in the road. It’s a shaky ride and loud, but eventually you get used to it. It’s a lot of fun.”

The teams don’t have access to the track ahead of time so it’s only when they get to the competition that they can see the results of their hard work. Long winters make it difficult for most Canadian teams to do field testing if there’s still snow on the ground.

“We have to be able to foresee all the obstacles ahead of time,” says St-Pierre. “We try to do performance tests indoors, but it’s not the same as driving on the streets of Detroit.”

At the competition, once everything is ready to go, the rest is down to the driver and the person coordinating the timing of their laps around the track. Driving strategy, like knowing when to speed up or slow down, can have a huge effect on overall performance.

“There’s always things you can’t control, whether there’s people driving really close to you or breakdowns on the track, you have to be careful,” says Confalone. “Each run we do is improving on our last one, until we get into the final groove where we know exactly what we need to do.”

The competition itself provides a collaborative work environment, where teams share a communal space with over a hundred other design teams from across the Americas. This gives them the opportunity to talk with each other, ask questions, share ideas and discuss designs. Students benefit not only from the knowledge and specializations of their own teammates but potentially from hundreds of others.

“It’s a great experience that allows us to meet other teams that have the same goal as us but have arrived at the finish line in different ways,” says St-Pierre.

Passing on the knowledge they accumulate through these experiences can prove difficult for teams. Students don’t receive school credit for the time they’re putting in, and if it’s not directly related to what they want to do in the future, they tend to drop out. Retaining membership is not the only obstacle that teams face.

“It took us two years to learn everything we needed to know to build that first functional car,” says Wang. “Every generation of students that comes in needs to go through that learning process. Sometimes there are first or second years who have no experience with even basic tool usage. Being able to get them up to speed and then push them to innovate, that process is the most challenging in terms of keeping our designs going.”

Each student can find a way to use these experiences to benefit their education or help launch a career. Since there are many systems that go into making one vehicle, they don’t have to be passionate about car design specifically to be involved in the team. The project requires technologies that could be universally applied and skillsets that can be used for many other career trajectories outside of engineering.

“Knowing how to work with people, how to deal with deadlines, how to deal with challenges that come up, contingency planning, troubleshooting — all those skills are invaluable,” says Wang. “It’s not about winning, it’s about making something that you’re proud of and then watching it work.” 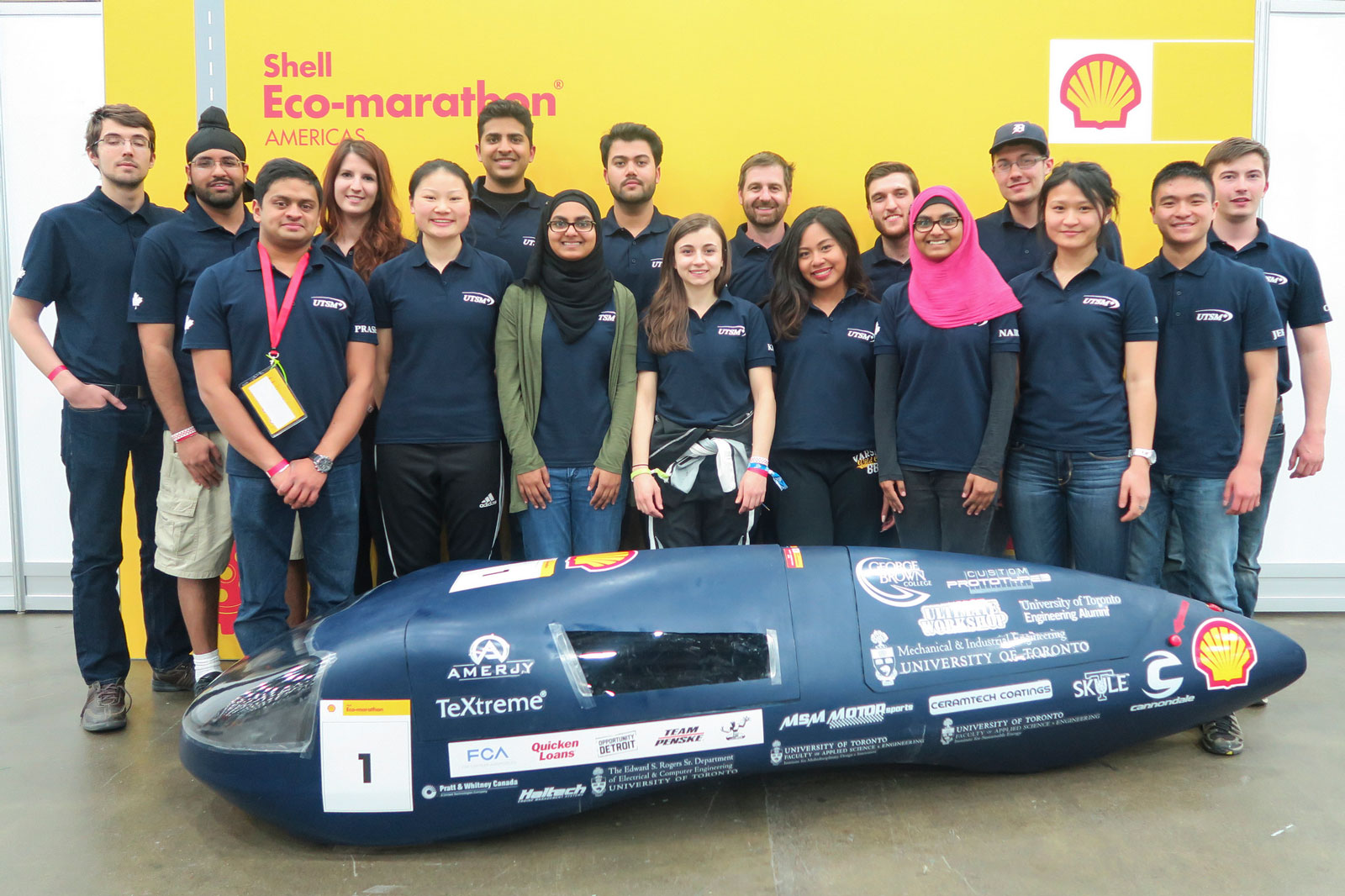 This article was created and published with the financial support of Shell Canada Limited.