A new book remembers famed the Onondaga distance runner and explores how Canada uses sport to police Indigenous bodies and identities
By Can Geo Staff
June 4, 2020

In her new book, the Western University professor delves into the history of Indigenous sport in Canada, exploring how it has been used as a tool of colonization, and its future potential in furthering Indigenous self-determination. Through the story of Tom Longboat (Cogwagee), an Onondaga distance runner who became known as one of Canada's greatest athletes, and his namesake awards, Forsyth looks at how Canadian sport has been used a tool for assimilation in residential schools, contributes to false narratives about tragic heroes, and how mainstream sport excludes Indigenous activities today.

Below is an excerpt from Reclaiming Tom Longboat.

Tom Longboat was an Onondaga runner from Six Nations of the Grand River, Ontario, who reached a level of success that most athletes only dream of attaining. Born Cogwagee in 1887, he competed in foot races of various distances at the turn of the twentieth century, but he was best known for his success in long-distance running. For nearly six years, from 1906 to 1912, he won almost every major race in Canada, the United States, and Europe, and he set a number of world records, ranging from the fifteen- to the thirty-two-mile event. In 1908, Longboat competed for Canada in the marathon at the Olympic Games in London, England. Although he was favoured to win, he collapsed late in the race from possible heat stroke. The stifling temperature had not a stitch of breeze to cool the labouring athletes, and more than half of the runners, including Longboat, failed to cross the finish line that day.

To say that Longboat was a prominent figure during his lifetime is an understatement. In the early 1900s, foot racing was a wildly popular sport. Hundreds and even thousands of people would gather to watch him race. Newspapers around the world printed stories about his achievements and his life. Readers learned that he was a dispatch runner for Canada in the First World War; that he held a job with the City of Toronto during the Depression in the late 1920s; and that he built a house for his mother on the Six Nations reserve, where he eventually retired with his wife and family. No matter where Longboat went, journalists followed him, paparazzi-like, digging into all aspects of his life and selling these tidbits as news for public entertainment. Longboat was not just an athlete; he was a superstar. 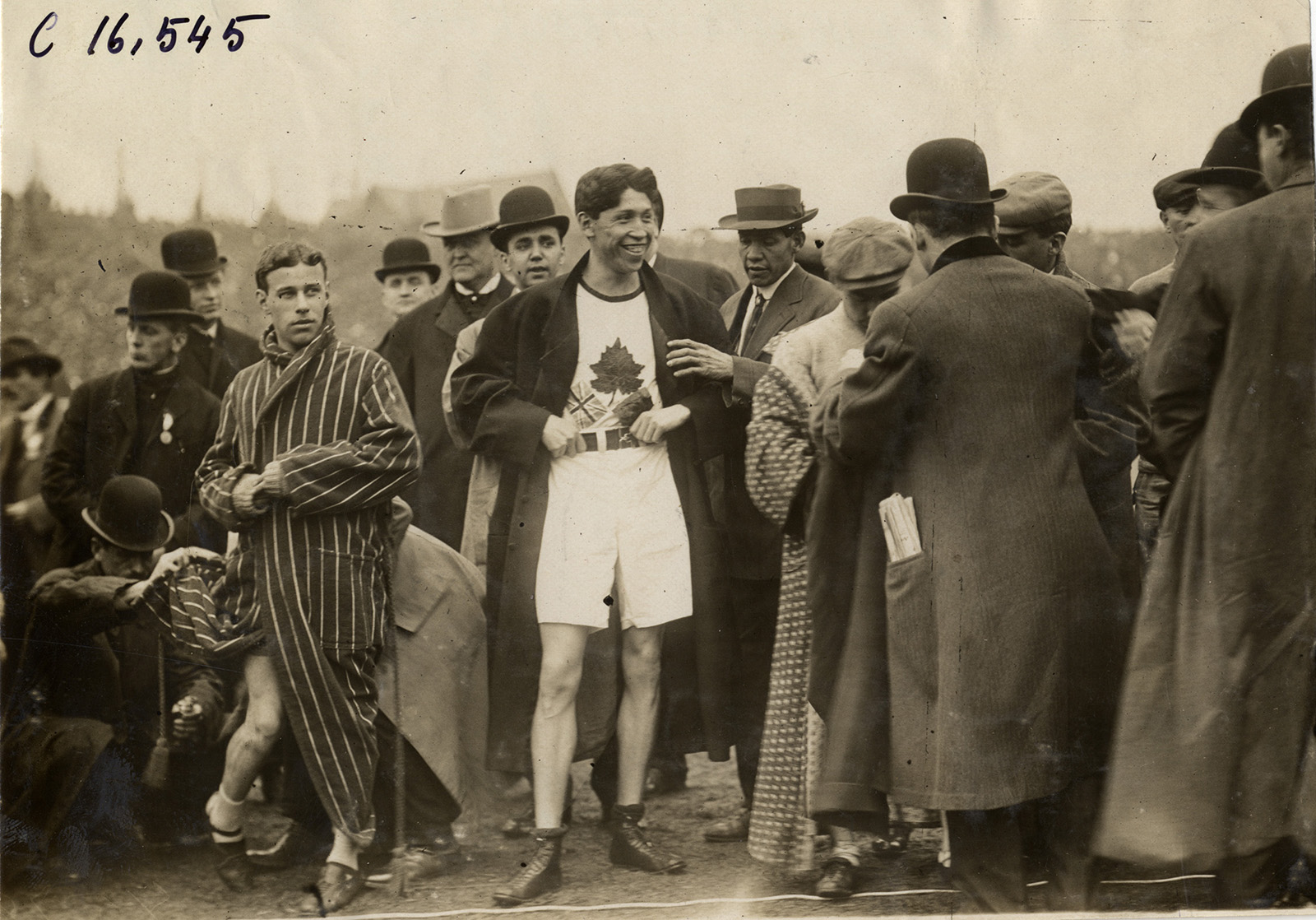 Such fame came with a challenge that few of his contemporaries had to face: unrelenting media attention that distorted his image to such a degree that it must have been hard for Longboat to recognize himself in the press. Journalists fostered his celebrity by adding racialized commentary to their reports and frequently drawing on stereotypes to describe his character, knowing that such commentary would make their stories more compelling for readers. On any given day, they would frame Longboat as a hero who had conquered the world; as a lazy Indian who would not train; as a gifted athlete admired by all; as a drunken Indian who squandered his prize money; as a cultured man with expensive tastes; as an uncivilized Indian who needed white men to help him find his place in mainstream society; as a role model to admire and emulate; or as a wayward Indian who needed to be steered away from his “natural” inclinations and vices. Longboat’s status as a tragic hero thus hinged to a large degree on the desires and prejudices of writers who fused together ideas about nation, race, masculinity, and class to create a composite picture that barely resembled the man.

After Longboat passed away in January 1949, the public remained captivated by his story, upholding the narrative of the tragic hero. If anything, that motif had become more firmly entrenched in the public imaginary, buoyed as it was by such men such as Fergus Cronin, who wrote an extensive article for Maclean’s in 1956 on the famed Onondaga with the title “The Rise and Fall of Tom Longboat.”

The article retold a well-worn tale: “He hated to train, and he was a fool with his money. But for half a dozen dazzling years this Canadian Indian could run farther, faster than any man alive. His downfall was just as swift.” Back then Maclean’s was Canada’s leading business and political journal. Many in the educated class would have read the six-page spread, absorbing the cultural assumptions that underpinned it.

The tragic hero narrative remained intact for another thirty years until historian Bruce Kidd published two seminal works that changed how many people came to see and understand Longboat. One was a book meant for a general audience, released in 1980 under the simple title Tom Longboat. The other, a scholarly article titled “In Defense of Tom Longboat,” was published in 1984. In it, Kidd confronted the racist media depictions of Longboat throughout and after his life, arguing that his “reputation fell because he did not embody the qualities the sports leaders and opinion-makers believed he should. He made his own decisions about training, racing and the conduct of his life: the criticism he received was a measure of his independence and self-determination,” not an objective assessment of his efforts. With these two publications, Kidd helped to redirect the national conversation about Longboat away from a racist discourse that emphasized individual failings to one that confronted the overt and systemic racism that influenced his life and career.

Of course, the new narrative did not emerge in a vacuum. Kidd was researching and writing about Longboat at a time when Indigenous people throughout Canada were pushing for social, economic, and political changes that would provide them with more control over their daily lives and more opportunities for the kind of growth that they needed and wanted. Their efforts had generated enough national and international attention through the 1960s and ’70s that, by the time Kidd published his work on Longboat in the 1980s, his views already resonated with the public. In this context Kidd’s version became what William Brown, in his thoughtful historiography of Longboat, called “the new paradigm.” A new perspective about Longboat, one that emphasized the overcoming of obstacles and maintaining one’s courage in the face of adversity, was thus put in play.

Yet many people were still unwilling to acknowledge—let alone address—their prejudices, especially when it came to sport. Writers of popular histories, whether in books or magazines, often focused on Longboat’s tremendous athletic abilities and repeatedly identified him as one of the greatest athletes in Canadian history, sometimes taking into account the context in which he lived. Most often, however, they glossed over the racism and its profound effects, producing an easily digestible narrative asserting that Longboat succeeded in spite of the many challenges he faced and that sport, the great leveller, helped him to do that. This narrative was appealing because it suggested that sport was somehow immune from the discrimination that structured everyday life and that evidence of bias, even when it was obvious, could be interpreted as a one-off incident that affected only a few people.

Longboat’s passing in 1949 also began an outpouring of commemoration that continues to this day. In 1952, Indian Affairs sponsored the creation of a film strip titled Tom Longboat: Canadian Indian World Champion, to be circulated among Indian residential schools in Canada. Jan Eisenhardt, the originator of the Tom Longboat Awards, created the film strip while working at the department. Forty years later, renewed interest in Longboat’s life and athletic career was evident with the release of two video productions: Wildfire: The Tom Longboat Story, a made-for-television film produced by the CBC, for which Kidd served as script consultant, technical adviser, and actor, and the documentary Longboat.