Rochelle Byrne is paddleboarding 420 kilometres along the shores of Lake Ontario to raise awareness about pollution that has infiltrated the lake
By Samantha Pope
July 19, 2020

Along the shores of Lake Ontario, you might spot a woman on a stand up paddleboard looking determined and persistent. That woman is Rochelle Bynre, and she is paddleboarding for a cause: to raise awareness about the presence of plastic pollution that has infested Lake Ontario.

Her 420 kilometre journey from Kingston to Niagara on the Lake is part of the Love Your Lake program from A Greener Future, a non-profit organization founded by Byrne that organizes litter cleanups in Ontario. Over the past five years, A Greener Future has picked up close to 1.5 million pieces of litter and just completed its 1,000th cleanup earlier this month.

Though the Love Your Lake program typically consists of 100 pollution cleanups by about 500 volunteers over the summer months, the COVID-19 pandemic halted this tradition and has limited these cleanups to members of the organization. Because of this, Byrne says she decided to get creative in raising awareness.

As A Greener Future is familiar with the locations between Niagara on the Lake and Kingston, Byrne says being on the water along this route seemed like a natural next step. The pandemic closed access to the beaches where volunteers would typically do their cleanups, but Byrne points out it is a lot easier to paddle along the shoreline and pick up plastic that way.

“It’s amazing that you can access shorelines and areas you wouldn’t normally be able to walk to,” she says. “You really see nature from a different perspective.”

On Canada Day, Byrne set out on her paddleboard. Two weeks later, on July 15, Byrne paddled out from Cobourg and passed the halfway point of her 420 kilometre trip, paddling 35 kilometres in seven hours. As long as the weather allows her to, she tries to paddle between four and eight hours everyday, scanning the shorelines for plastic.

“I often see plastic along the shoreline but I can't get to it,” she says. “My ground team has been doing litter cleanups along the shore as they follow me and have picked up over 36,400 pieces of litter.”

While Byrne is out paddling, A Greener Future is showcasing her journey through a live map they have embedded on their website. Her paddleboarding trip is being documented through social media updates, interactive trivia and waste reduction trivia, all with the goal of raising awareness for this campaign.

Of course, Byrne’s trip hasn’t been without challenges. Paddling against the wind and waves can be difficult, the summer heat can be draining and thunderstorm warnings can delay paddling days. But, Byrne says the challenge is what keeps things exciting.

“I have done challenges like this before and I do like the endurance aspect of it all,” she says, explaining that she has hiked the Camino de Santiago in Europe a few times, which is a 790 kilometre route. “Paddling long distances is always way harder than I would expect. I knew this would be hard but I knew it was something I could achieve.”

Lake Ontario provides the source of drinking water to more than nine million people, and as many people rely on the lake for their work or recreation activities, so Byrne says it should be a priority for us to protect this important body of water.

“Lake Ontario is something that a lot of people take for granted,” she says, “so paddleboarding across the lake is meant to grab people’s attention and, in turn, get them to listen to our message.” 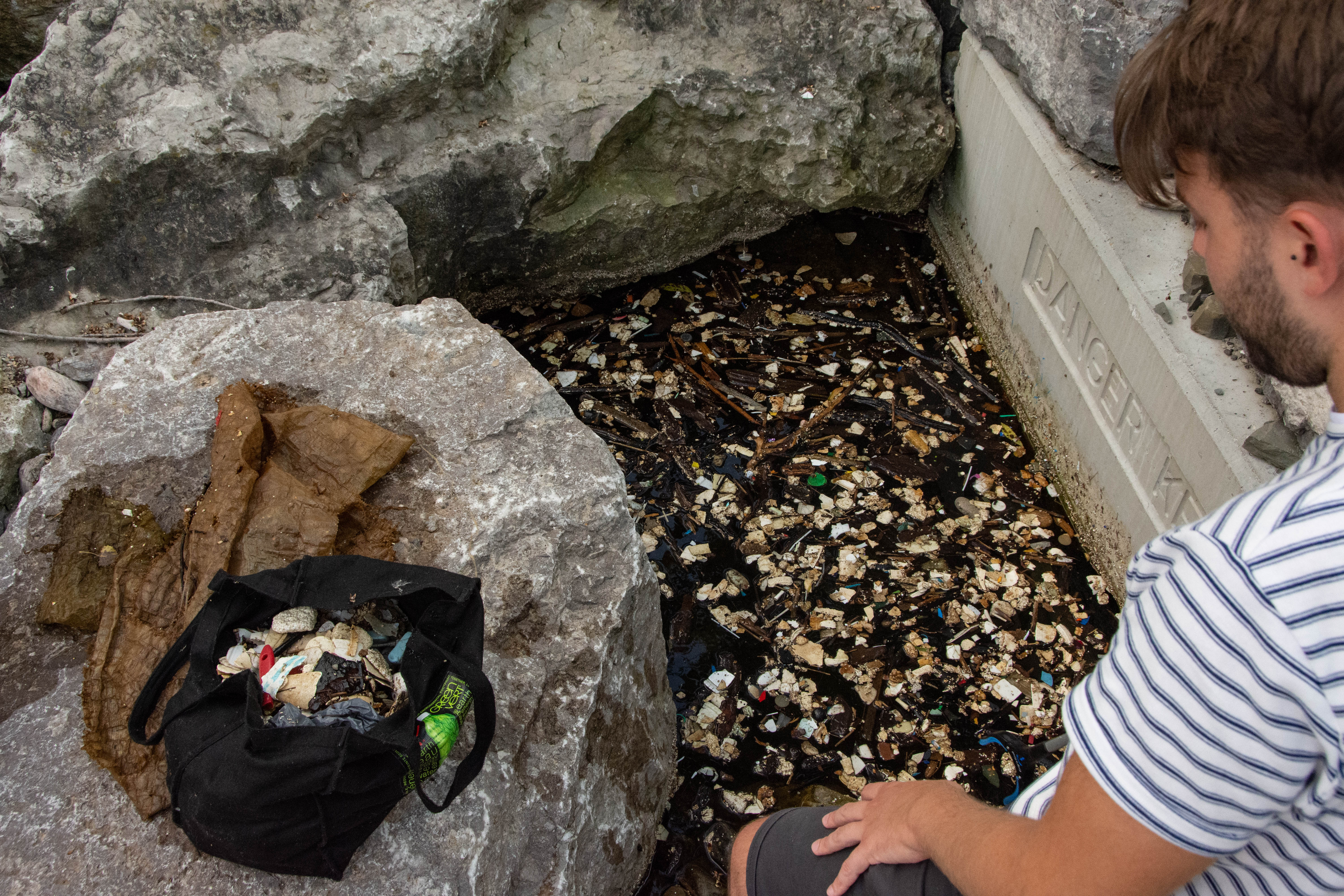 Large pieces of garbage have been found in Lake Ontario and can choke animals, damage habitats and leach harmful chemicals into the water. But as plastics break into smaller fragments, it is not always easy to spot the pollution. These small fragments, known as microplastics, can also have damaging effects on animals and ecosystems, contaminating every species in the food chain.

“That’s the thing about plastic pollution: you can’t always see it,” Byrne says. “Microplastics are a huge problem, even in Lake Ontario. But even though we cannot see it, it’s something that affects us all in the long term.”

Byrne points out that we don’t have the technology to filter microplastics out of our drinking water, which means we also face the damaging effects of these pollutants.

“It’s much easier to protect a body of water than it is to clean it up after it’s already polluted,” she says. “By taking action now we have a good chance of preventing further pollution and come up with technologies that can clean up microplastics that are already in the water.”

Byrne says she hopes to reach Niagara on the Lake on July 26, almost a month after she departed from Kingston. She says she thinks she would do a similar challenge like this in the future, though next time she would choose to paddle certain stretches as some parts of her current route don’t allow her to stop and get out of the water. In addition, she would look to have other paddleboarders accompany her on her journey.