You’ve heard of snakes on a plane, but what about snakes in tubes?
By Angelica Haggert
June 29, 2020

The Massasauga rattlesnake is Ontario's only venomous snake, though it poses little threat to humans. In First Nations tradition, the Massasauga is the medicine keeper of the land, but today it is threatened by habitat loss, vehicle strikes, intentional killing and illegal collection for the pet trade. In the Carolinian region of southwestern Ontario, there may be fewer than 40 of these ecoystem-link creatures left in the wild.

Given all the threats to their survival, helping these heat-loving reptiles find safe places to hibernate during the winter months is crucial to their recovery. That’s not easy to do given the increasing unpredictability of winter temperatures and precipitation, but at Ojibway Park in Windsor, Ont., Wildlife Preservation Canada (WPC) has come up with an interesting approach.

Last winter, WPC biologists put 21 garter snakes in underground plastic tubes throughout the park and used a borescope — a tiny camera attached to a slim wire — to check in on them every two weeks. All but one of the snakes survived, which gives researcher Jonathan Choquette hope that these subterranean chambers can be used to help the Massasaugas.

The first phase of the recovery project, which began in 2015, was to identify suitable hibernation habitats. Massasaugas gravitate toward natural crevices, tree root cavities and animal burrows that allow them to get below the frost line but stay above the water table. From the surface, it’s not entirely obvious where these spaces are located, especially in a flood-prone area like Windsor-Essex, so Choquette and the research team had to use special measuring techniques, including soil temperature monitoring, to choose spots that would give their experiment the best chance of success.

Having identified these specific areas, Choquette says they first wanted to hibernate a “surrogacy species” — garter snakes, which are not an endangered species — to determine whether the spots were suitable for overwintering. If the garter snakes were able to survive hibernation in the tubes, there’s a good chance the endangered rattlesnake would too.

Choquette designed the artificial hibernation tubes in conjunction with a few other researchers, including some from the Niagara area and some from Hungary who are doing similar work with their own endangered snake species.

“I wanted to replicate the natural crayfish burrow, but also build something out of readily-available materials, so I chose ABS [a common plastic], which is available in all hardware stores across North America,” says Choquette. The tubes cost about $70 to build and are just over one metre long. They were slid into the ground with the garter snakes already in them. 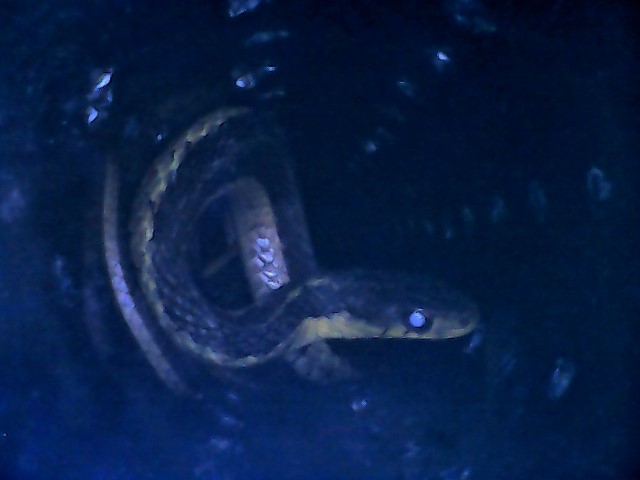 The researchers checked in on the snakes every two weeks with a borescope camera. (Photo: Wildlife Preservation Canada)

The snakes’ 95 per cent survival rate in the tubes is in line with survival rates for the species in the wild, which suggests the locations could be suitable for hibernation of Massasauga rattlesnakes. The next step will be to run the experiment for a second winter, with more snakes across more sites.

“Winters are quite variable, so we want to confirm survival is high for a second winter in a row,” says Choquette.

Eventually, the aim is to reintroduce Massasaugas to the area using this artificial hibernation procedure. By translocating the snakes to specially selected hibernation sites, the theory is that they will learn to return to those places winter after winter.

Asked why he would go to such lengths to protect the Massasaugas, Choquette laughs. “We all love rattlesnakes, right?”

But all jokes aside, he adds it’s an iconic animal in southwestern Ontario that deserves our help and understanding.

“We don’t want to lose the ecological integrity of our natural areas. We want to restore what’s been lost and undo the damage we’ve created in the past. Bringing back animals that have disappeared is one way of righting our wrongs.”