Natalia Martinez doesn't mince words when it comes to her four-day ordeal on the side of Canada's highest mountain, which finally ended Thursday night when she was airlifted to safety.

Martinez, an experienced mountaineer from Argentina who received an expedition grant from The Royal Canadian Geographical Society, had been attempting a solo traverse of Mount Logan via the demanding and technical East Ridge route.

Her climb, which began on April 22, was initially dogged by bad luck, including a broken crampon and finicky stove, but she remained in good spirits and was determined to reach the summit.

“When I was climbing, I was thinking all the time, ‘Ah, I’d like to share this view with Camilo,’” she says, referring to her partner Camilo Rada.

Then, on May 1, a powerful earthquake struck near Whitehorse, triggering avalanches on the glacier near Martinez's campsite. Bad weather ultimately forced her to suspend her climb and request evacuation.

“I was very happy to be there, but after the [quake], everything changed. My motivation dropped. I couldn’t think properly.”

She was stuck alone on a ridge about 3,700 metres up, while weather hampered efforts to reach her by helicopter.

"Waiting is hard," she says. "You start to see a lot of dangers around you and you don’t feel confident. Any cloud you see, you expect a big storm. You don’t want to take any steps because you don’t know if you are safe.”

To pass the time, she worked on keeping her tent in good shape, which helped to shelter her from temperatures that reached -25 with the wind chill. “I cried a little. Tried to be strong,” she says.

Martinez was safely airlifted to the Icefield Discovery base in Kluane Lake, Yukon at 10:30 p.m. Thursday night. Parks Canada had initially planned to reach her by helicopter Friday morning, but Tom Bradley, a pilot with charter service Icefield Discovery Tours, noticed an improvement in the weather around Mount Logan at 7:30 p.m. and the decision was made to attempt an earlier rescue.

Ian Pitchforth, one of the pilots on the rescue mission, says there wasn’t enough flat space to land the helicopter on the ridge where Martinez was camped, so they performed a tow-in rescue, meaning they put the nose of the helicopter against the mountain to hold it steady while Martinez climbed into the still-flying copter.

“It was amazing,” Martinez says. “He kept the helicopter close to me, on the air practically. They put me in the helicopter with my things. It was fast. It was quick, like they do it every day.”

A photo posted to her expedition log showed Martinez healthy and in good spirits after her ordeal. She says the first thing she did after her rescue was drink tea with friends. “It was nice to feel the warmth of the people. I felt like I was at home."

While she’s looking forward to getting back home to Argentina so she can reunite with her friends and family, she says she’d come back and climb Mount Logan again.

“I would love to do that. Why not?” she says. “These were weird circumstances for me, but I don’t want to stop climbing mountains.” 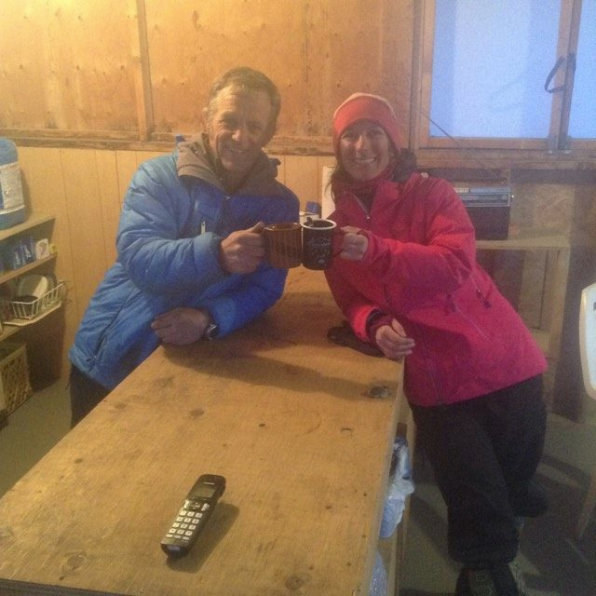