“Can anyone tell me what this is?” A man with a straw hat and a Métis sash around his waist holds up a dark, brick-like object.

“That’s tea!” Justice Aubichon calls out from her place in the semi-circle gathered around the Parks Canada interpreters at Lower Fort Garry National Historic Site north of Winnipeg. It’s the last day of Canada’s Coolest School Trip and the students have left behind the wild beauty of Riding Mountain National Park for one of Canada’s oldest fur trade outposts.

The students are transported back to the 1850s, when trappers and traders from the Hudson’s Bay Company travelled the waterways on York boats, transporting furs and goods across Rupert’s Land. Interpreters at Lower Fort Garry’s Métis camp pass around beadwork and tea for the students to examine. Aubichon was the only one to correctly identify the tea brick and surprised even herself with the obscure historical trivia. “Even the teachers didn't know," she says with a grin.

Lower Fort Garry is a vast complex encompassing simple farm houses and the well-furnished homes of the company men, and gives students a glimpse into everyday life in the mid-19th century, from combing and spinning wool to making nails in the blacksmith’s shop. At the fort walls, the students are shown where holes have been left between the stones to allow for soldiers to defend against a siege. The phrase “looking for a loophole” refers to how someone from the outside might search for these holes in a defensive wall.

Inside the fort walls, students encounter traders from the Hudson’s Bay Company and try to barter with them, offering candy and gummy worms for one of the furs laid out on a table full of goods. These same furs are stored in the building beside the trading stand, and the students are given the opportunity to climb up into the loft where hundreds of furs hang from the rafters. Everyone scatters to look at the different animal pelts, running their hands over the fur. 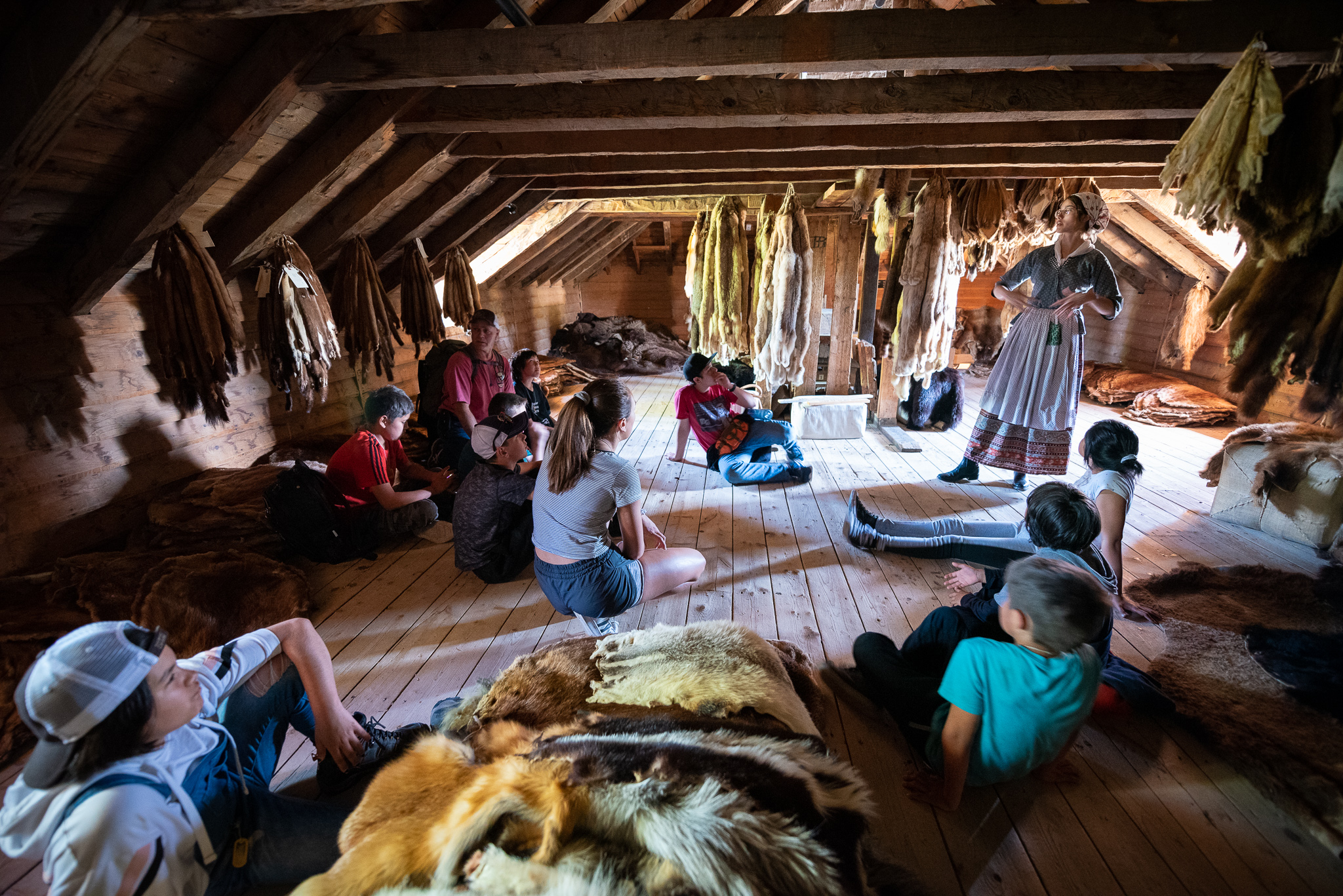 In the fur loft, students learn about how Hudson's Bay Company tripsmen would have to travel for months at a time, carrying about 40 kilograms worth of goods, and portaging them over rivers, until they reached their final destination. (Photo: Tanya Kirnishni/Canadian Geographic)

“This feels so nice,” says Seth Netro. “It's a wolf, I could tell by the tail! I didn’t even need to read the card on it.” Netro has gone hunting with his grandfather in the past, mainly looking for moose. He explains that moose hides are soft depending on whether they're a young or old animal.

After a day of wandering around in the sun, the students finish their visit to Lower Fort Garry by learning how to make ice cream the old-fashioned way, taking turns churning the cream and adding ice to the container to thicken it. It’s a perfect cold treat to end the tour and everyone goes in for a second serving.

From there, they’re off again. The bus makes a short pit stop for dinner at a popular local diner called Half Moon. Several of the students are completely enamoured with the fun 80s vibe.

"I've never loved a place so much in my life, it's amazing — I want to take so many pictures!" Aubichon is beaming as she twirls around, her eyes darting around to take everything in — the large wall mural of James Dean, Elvis Presley and Marilyn Monroe, the plush booth seats, and checkerboard-tiled floor. The burgers, hot dogs, onion rings and fries are also a huge hit. “It's ten times better because I'm eating it here,” says Aubichon.

After dinner, they’re back on the bus for their last stop of the day. Being on the road, even travelling from one beautiful destination to another, can be a test of patience, but the kids are good-natured about it. "Manitoba has a lot of traffic and is very cold at night, but it has the nicest bus drivers in Canada," says Kingston Bottle-Wiseman, in praise of bus driver Jack Graff.

And no road trip would be complete without some loud and off-key karaoke. Parks Canada Youth Ambassadors, who have been with the students for much of the trip, lead them through some enthusiastic covers of songs by Queen and Billie Eilish. As they finish off their last song, the bus pulls up at Riel House National Historic Site, where students receive a tour about the life and death of Louis Riel, whose 175th birthday anniversary is being celebrated this year.

With the day winding down, everyone has a chance to relax on the lawn behind the house and listen to some traditional Métis fiddle music. Some of the students even learn how to do the Métis jig — jumping and kicking their feet out with lots of laughter and good-natured teasing.

It’s been a jam-packed day and the students turn in early to get some rest for their flight home the next day. In the morning, they have just enough time to head down to the Forks National Historic Site for one last look at Winnipeg before they leave. There’s a cool breeze coming up off the water as they gaze out at the meeting of the Red and Assiniboine rivers. It’s been a long trip — from Riding Mountain’s tranquil Clear Lake to the formidable walls of Lower Fort Garry — and an experience the kids won’t soon forget. 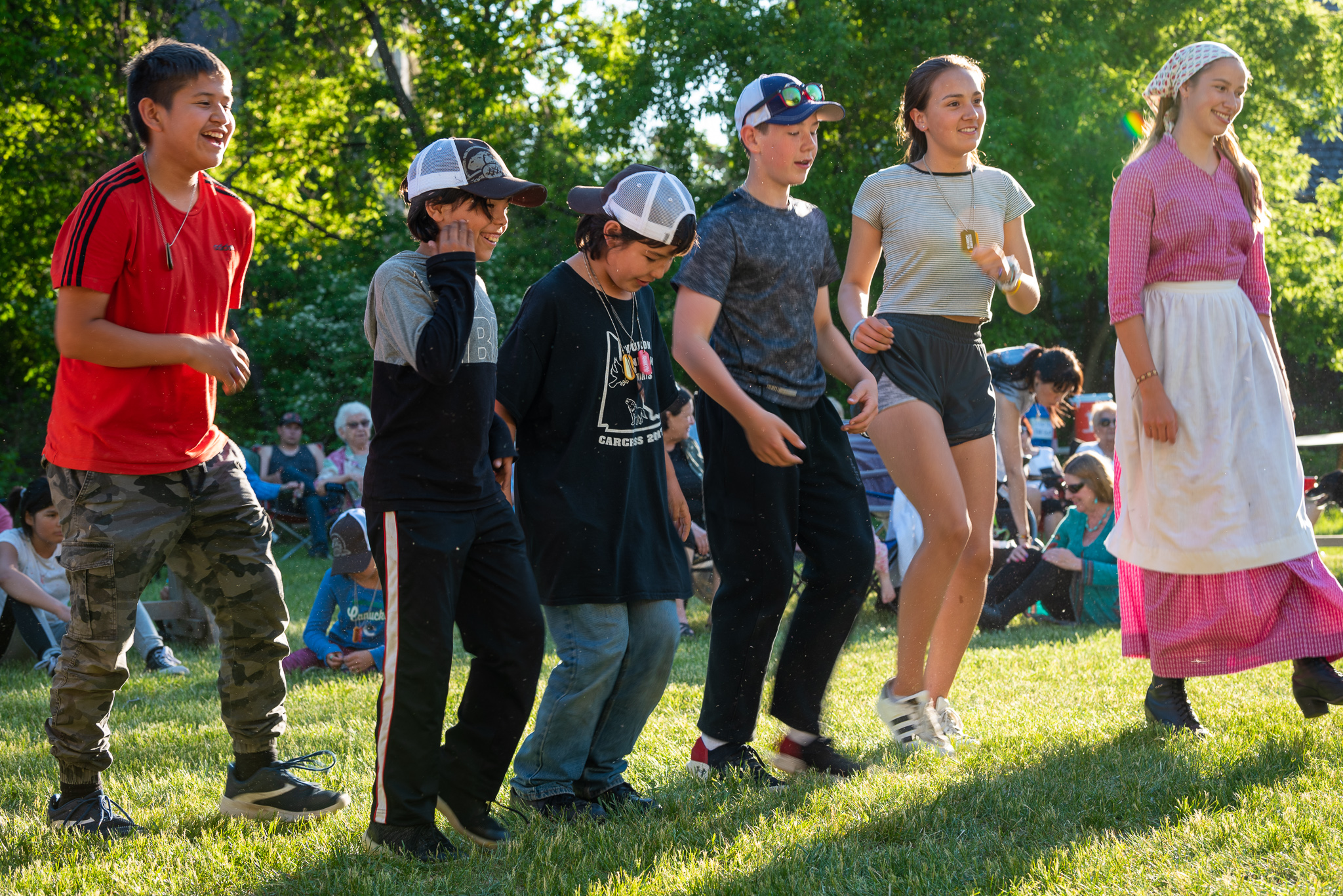