Speaking up for the spirit bears

A new children’s book from Kids Can Press tells the story of Vancouver native Simon Jackson’s efforts to raise global awareness of the importance of British Columbia’s Great Bear Rainforest
By Alexandra Pope
May 1, 2019

Simon peered through a telescope from a lookout post in Yellowstone National Park. Hours ticked by. Rain soaked his clothes. Still, he didn’t budge.

Finally, a mother grizzly bear emerged from the pine forest with two playful cubs by her side. She was huge, especially when she stood on her hind legs. Coyotes quickly retreated. No one messed with a grizzly. Seven-year-old Simon wished he was as powerful as a bear.

So begins A Voice for the Spirit Bears, a new children’s book out this month from Kids Can Press, written by Carmen Oliver and illustrated by Katy Dockrill. Part of the CitizenKid book collection, which aims to make global issues understandable for younger readers and inspire them to take action, A Voice for the Spirit Bears tells the true story of Vancouver native Simon Jackson, who in 1995 learned about the Kermode or “spirit bear,” a rare white colour phase of a subspecies of American black bear found only in his province, and the threats to its rainforest habitat. Determined to do his part to save the bears, Jackson, then 13, founded the Spirit Bear Youth Coalition, an advocacy group that mounted a letter-writing campaign to convince the B.C. government to protect the Great Bear Rainforest and raised global awareness about the forest’s importance. In the process, Jackson had to overcome a speech impediment and fear of public speaking, and endured bullying from his peers.

It took 20 years of negotiations with the province and logging companies and the perseverance of First Nations, environmental NGOs and concerned citizens like Jackson, but in 2016, an agreement was reached that will see the majority of the old-growth rainforest remain off-limits to logging.

Now in his 30s and living in Calgary, Jackson, together with his wife Jill Cooper, continues to promote nature literacy among young people through the non-profit Ghost Bear Institute.

On his first experience with advocacy

When I was seven years old I went on a camping trip with my family to Yellowstone National Park in the United States. On that trip, I saw a grizzly bear with two cubs, and it captured my imagination. I wanted to know everything there was to know about bears. One evening after we returned home, I saw a story on the news about Alaska’s Kodiak bears, and the plans being drawn up to develop their home. In my seven-year-old mind, it was an assault on those same bears from our camping trip. I wanted to help, and of course the answer of what to do was obvious: have a lemonade stand. I raised $60, wrote a couple of letters, and sure enough, the Kodiak bear was saved. It obviously had nothing to do with me, but it planted that seed. It made me realize that my voice mattered.

On overcoming his fear of public speaking

I did have a stutter growing up, and I still do, especially when I’m tired or stressed. When I was in Grade 5, before I learned about the spirit bears, I wanted to help save bald eagles from lead shot poisoning, and I wanted to give a speech. My teacher came to me and said, “Honestly, Simon, this is not what you love doing, it makes you nervous. Are you going to be okay?” It wasn’t a discouragement; it was almost an empowering moment. It was like, you can do this if you really want to do it, but recognize that it’s going to be hard. That was the first moment I realized I needed to overcome my fears if I wanted to do the things I really believed in.

On his friendship with Dr. Jane Goodall

My high school years were extremely difficult. I was bullied from the moment I got on the school bus in the morning until the moment I got off. I often felt like I was the only person in the world doing what I was doing. When I had a chance to meet Dr. Jane, it was like someone else got me. The fact that she took the time to sit down and talk to me and give me advice, not just on that one occasion, but many times, was really a motivator for me. It made me realize that this was bigger than me, that we’re all in this together, we all have to be good stewards and do better for nature.

A Voice for the Spirit Bears is written by Carmen Oliver and illustrated by Katy Dockrill. (Images courtesy Kids Can Press)

On the legacy of the Spirit Bear Youth Coalition

What’s amazing to me is that the Great Bear Rainforest was protected with the support of more than 90 per cent of British Columbians. That’s important because today we live in an age of divisiveness, of polarization, yet with this issue we were able to unite people from all walks of life. We need to find more things like that. To me, nature is something that should unite us, and the fact that we could do it for the spirit bear means that we can do it for any issue in the world.

On his advice to young activists

I say to people all the time, I’m not special, I’m not gifted, I’m not even particularly smart. I was one person who found my passion at a young age and was extremely fortunate to be able to chase it. The fact that together we were able to help save the spirit bear should prove to the world that one young person, no matter their skills or intellect, but armed simply with a passion, can take hold of a cause and change the world.

Watch: Simon Jackson reads aloud from the book and shares the story behind the story 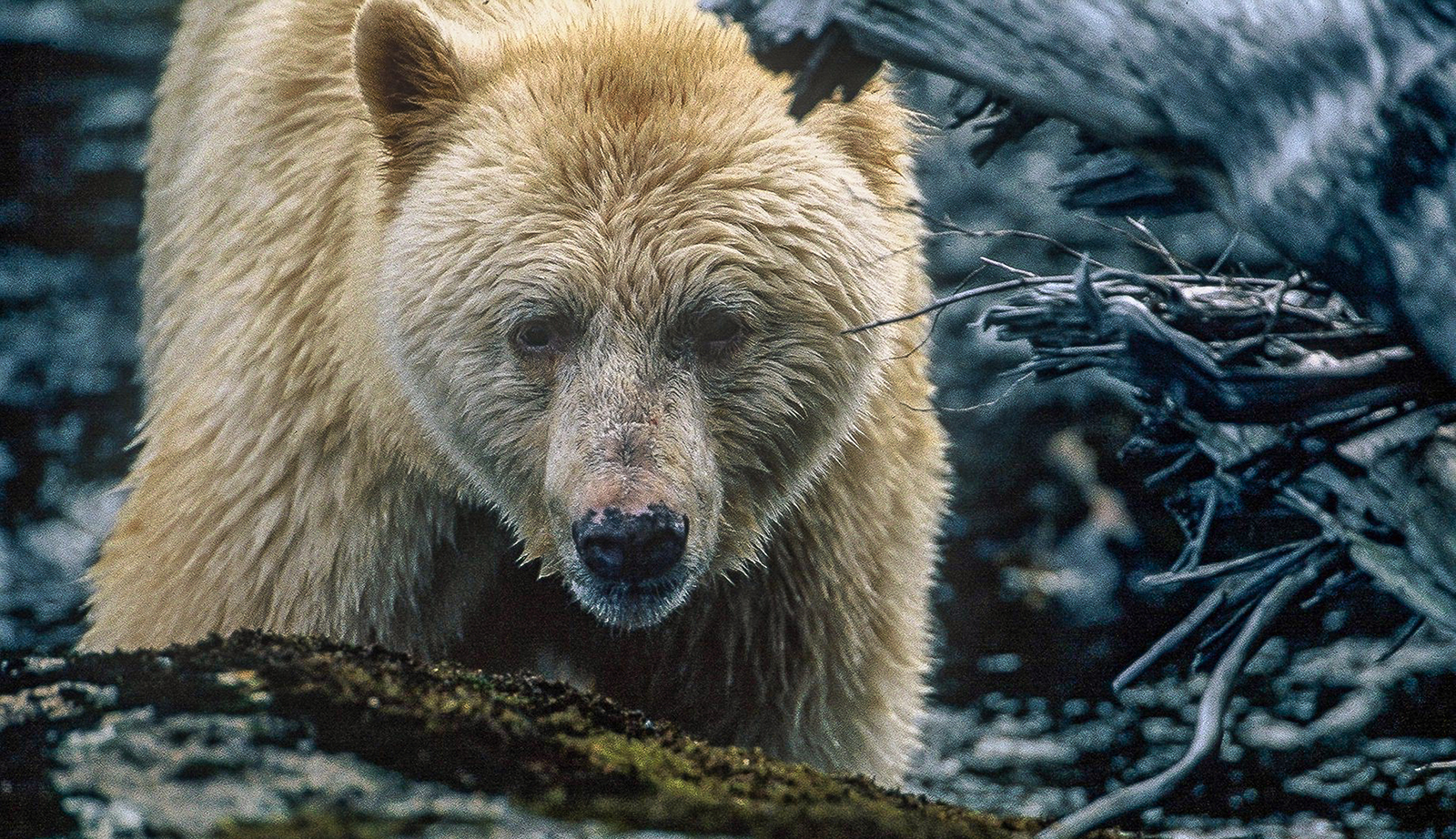 Kermode bears, more often called spirit bears or ghost bears, live in the temperate coastal rainforests of northwestern B.C. They are not a unique species, but rather a rare colour phase of a subspecies of American black bear. Their creamy white fur is caused by a recessive gene; both a male and female black bear must carry the gene in order to produce a white cub. It’s not known how many spirit bears there are across their entire range, but on one island in the Great Bear Rainforest, more than 40 per cent of bears are white.

According to a story of the Tsimshian First Nations, spirit bears were created by Raven as a reminder of the last Ice Age. Raven decreed that one in every 10 bears would be white, and that these special bears would live in peace and harmony forever. Today, the bears are an important focus for Indigenous-led tourism in the Great Bear Rainforest.

Spirit bears, like other bears, play an important role in the rainforest ecosystem. They bring salmon into the forest to eat, and the remains provide food for other scavengers and ultimately break down, returning nutrients to the soil.