With millions of photos taken globally each day on smartphones, researchers have found they may also contain important ecological clues about our rapidly changing planet
By Katarzyna Nowak and Don Reid
November 16, 2020

Digital and cellphone cameras are now so ubiquitous that millions of images are captured around the world every day. These photographs have the potential to achieve more than just wowing our friends on social media, however. They may also contain important ecological clues about our rapidly changing planet.

We recently used hundreds of photos taken by amateur and professional photographers to help answer questions about mountain goats and phenology — the timing of periodic events like the shedding of winter coats. When it comes to mountain goats’ coats, we wanted to see what factors affect when and how quickly the goats shed their coats in the face of climate heating.

You can throw your winter parka off early if spring is unusually warm. Mountain goats, which have thick double layer coats to survive cold winters in the high alpine, do not have the same flexibility. And it is not just mountain goats that may be facing challenges keeping up with climate warming. Animals like muskox, wood bison and moose also grow — and shed — thick winter coats and face the risk of overheating. But for our study, we opted to focus on mountain goats, a sentinel of the high climes.

It turns out that many people enjoy photographing mountain goats. They are striking animals often seen in rugged and photogenic landscapes. Hikers, bikers, climbers and other backcountry visitors were among those who shared photos of these nimble creatures with us. We also used established community science platforms such as CitSci.org and iNaturalist to solicit and search for photos from across the mountain goat range in the U.S. and Canada. We had a great response to our call for photos, although most images we received were of relatively recent vintage. 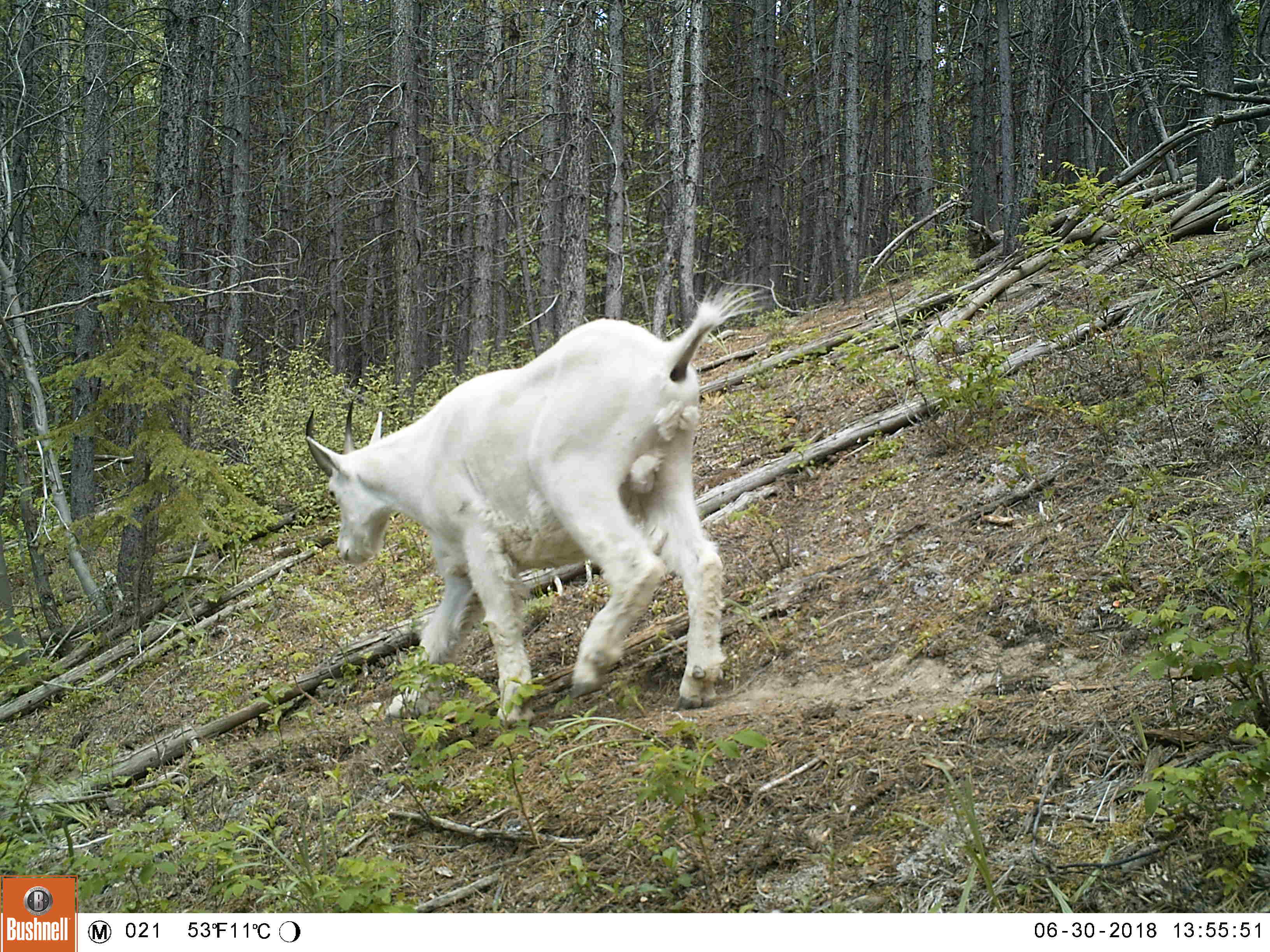 We also went looking for mountain goats ourselves, especially at the northern limit of their range in the Yukon, where the photographic record was much thinner. WCS Canada’s Yukon field office was our northern hub from where we identified promising areas to set up camera traps along goats’ well-worn trails and gathering places like mineral licks. Over the spring and summer of 2018, we also took repeated photographs of 14 captive mountain goats housed at the Yukon Wildlife Preserve. Given that northern latitudes are warming much more quickly than areas further south, it was important to assess how goats
were faring at the far northern edge of their range.

We accumulated 700 images that met our selection criteria: time and location stamps, fine enough resolution and, preferably, side-facing orientation of adult goats. We then set about analyzing the state of the photo subjects’ coats using a pixel-counting method designed with the help of graphic designer/photographer Joanna Nowak to determine how much shedding had occurred. (The data complexities of this project inspired a few spin-off efforts, including the development of artificial
intelligence tools by high school student Aditya Mehta to automate the scoring of shedding; the use of our dataset in a mathematical modeling class at the University of Tasmania; and a Yukon University senior thesis by Maegan McCaw, who, using our camera trap images, found that activity of mountain goats in the Yukon peaks at night.)

Our research confirmed observations made by the late Tlingit weaver and traditional knowledge holder Teri Rofkar, who used mountain goat hair in her Ravenstail designs. She documented that male mountain goats, or “billies,” shed their wool in late spring, while the females, or nannies, shed later.

Nannies with offspring tended to lose their winter wool only once they had weaned their kids, Rofkar observed. So, in another example of science catching up to Traditional Knowledge, we too observed the delaying effects that offspring have on the timing of nannies’ molt: billies molted first, then nannies without kids, and finally nannies with kids.

These results were consistent between our community-sourced photo data and the data we collected at the Yukon Wildlife Preserve. They were also consistent with fellow researchers’ work at Caw Ridge, Alberta, North America’s longest-running study of mountain goats. 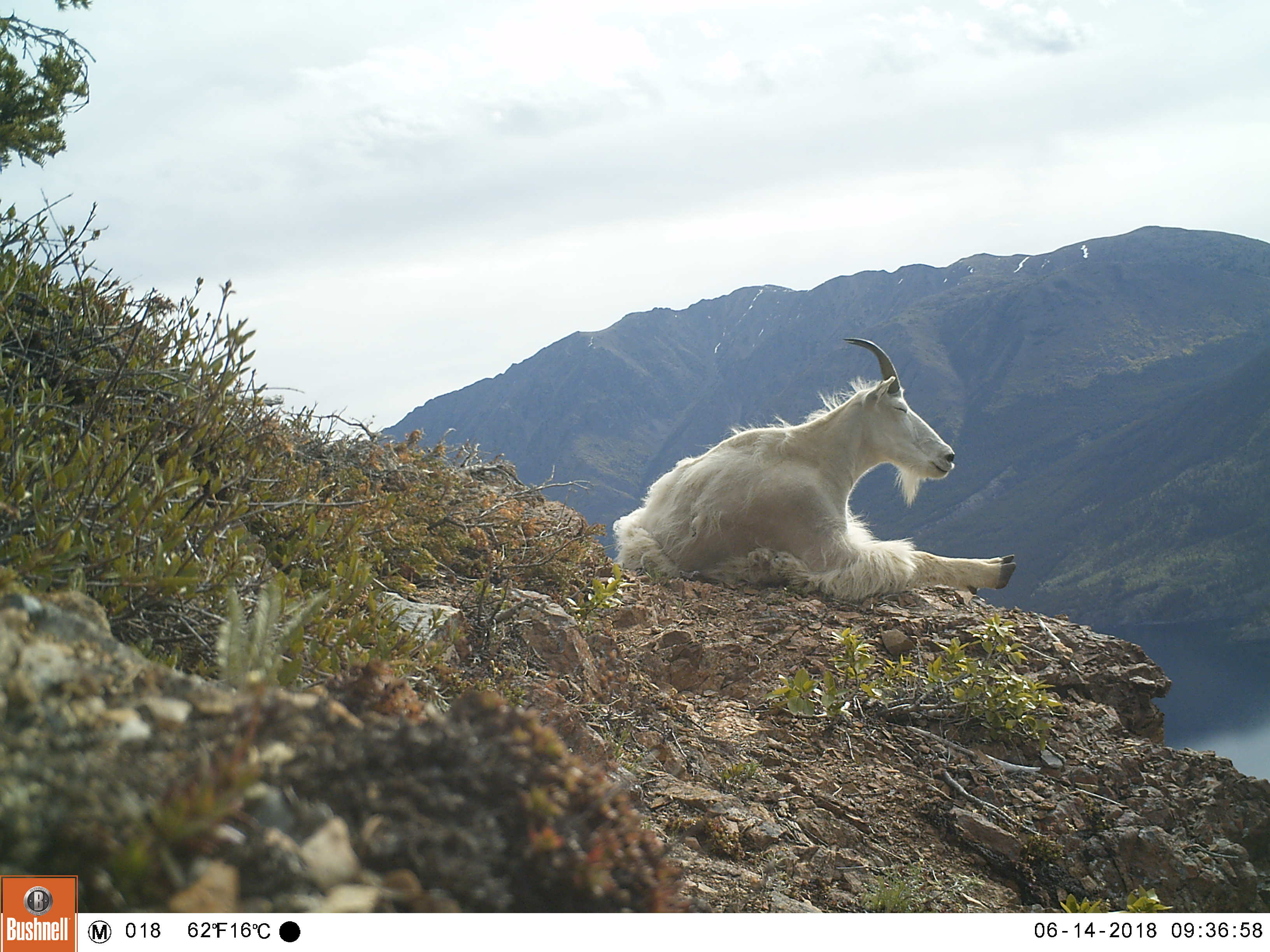 Adult nanny with kid on a forest trail below Mount White on Carcross/Tagish FN Traditional
Territory.

Thanks to the broad spatial coverage of our community-sourced data, we were also able to determine that mountain goats molt later in high mountains and faster at northern latitudes compared with southern latitudes. Taken together, our findings imply that females with new offspring in areas without high mountains (with no more “up”) may become especially prone to heat stress as summers continue to warm. They might need to thermoregulate by adjusting their behaviour to help them cool — through seeking water, shade, windy ledges and snow patches. Having a kid in tow may make these behavioural adjustments more arduous, however.

We detected no shifts in molt timing or rate, although this may be because of the limits in our dataset, particularly the preponderance of more recent photos. So, in future, we, or other researchers, may return to the question of whether goats are molting faster or earlier. If we do, we will have some valuable baseline data and a good idea of where we might turn for assistance with getting answers —community science. In other words, your Instagram feed.

Please maintain a safe and respectful distance from wildlife when photographing them to avoid personal injury and stressing the animal.
Katarzyna Nowak is a wildlife scientist, a fellow of The Safina Center, conservation science coordinator with the Canadian Parks and Wilderness Society Yukon chapter, and co-founder of the Request a Woman in STEMM database. She is interested in human-wildlife interactions and collaborative conservation on a transboundary scale, and aspires to improve the engagement of women, underrepresented groups, and the public in science and conservation.
Don Reid is a Conservation Zoologist with Wildlife Conservation Society Canada’s Northern Boreal Mountains program, based in Whitehorse, Yukon. He leads a team of biologists pursuing improved stewardship of wild species and wild spaces through field research, land use planning, cumulative effects assessments, and climate change mitigation and adaptation.