A new memoir that unpacks the life of one of Canada’s most accomplished astronauts, who’s also an aquanaut, doctor, CEO and cancer survivor
By Nick Walker
November 1, 2018

Astronaut Dave Williams is Canada’s record-holder for time spent on space walks; some of his missions were performed with only the foot restraint at the tip of Canadarm2 holding him back from empty space. He’s blasted into orbit twice aboard NASA space shuttles (installing crucial new sections, systems and instruments on the International Space Station on the second expedition), performed the first-ever surgery in space, lived under the sea for weeks on NASA’s NEEMO missions, beat cancer, saved lives in emergency rooms and founded a residential hospice in the Greater Toronto Area to improve end-of-life care. “But,” he says, “at the end of the day, I’m just a curious kid from Saskatchewan.”

His new book, Defying Limits: Lessons from the Edge of the Universe, is the culmination of his life’s experiences. It took time to reflect on how to share these stories, he explains, but the underlying theme of the book is that we simply cannot accept the word “impossible.”

“It’s about defying what I was told for the first time when I was seven and living in Montreal — that it was impossible to become an astronaut,” he says. “It’s also about getting into medical school, about dealing with the magnitude of the 2003 Space Shuttle Columbia tragedy and the loss of my seven friends, and about recovering from prostate cancer. And it’s about the idea of defying time itself.”

Williams’ book is a remarkable portrait of one of the most down-to-Earth people to ever go into orbit, and it will resonate with astronauts and the other 99.999999 per cent of the population alike.

“I may have experienced a lot, but I certainly don’t have all the answers,” he says. “What I do know is that the exciting part of life is taking on and relishing the challenges that arise as we continue to live and enjoy our lives — that’s just as meaningful as relishing the good moments.”

Read on for the prologue from Defying Limits: Lessons from the Edge of the Universe. 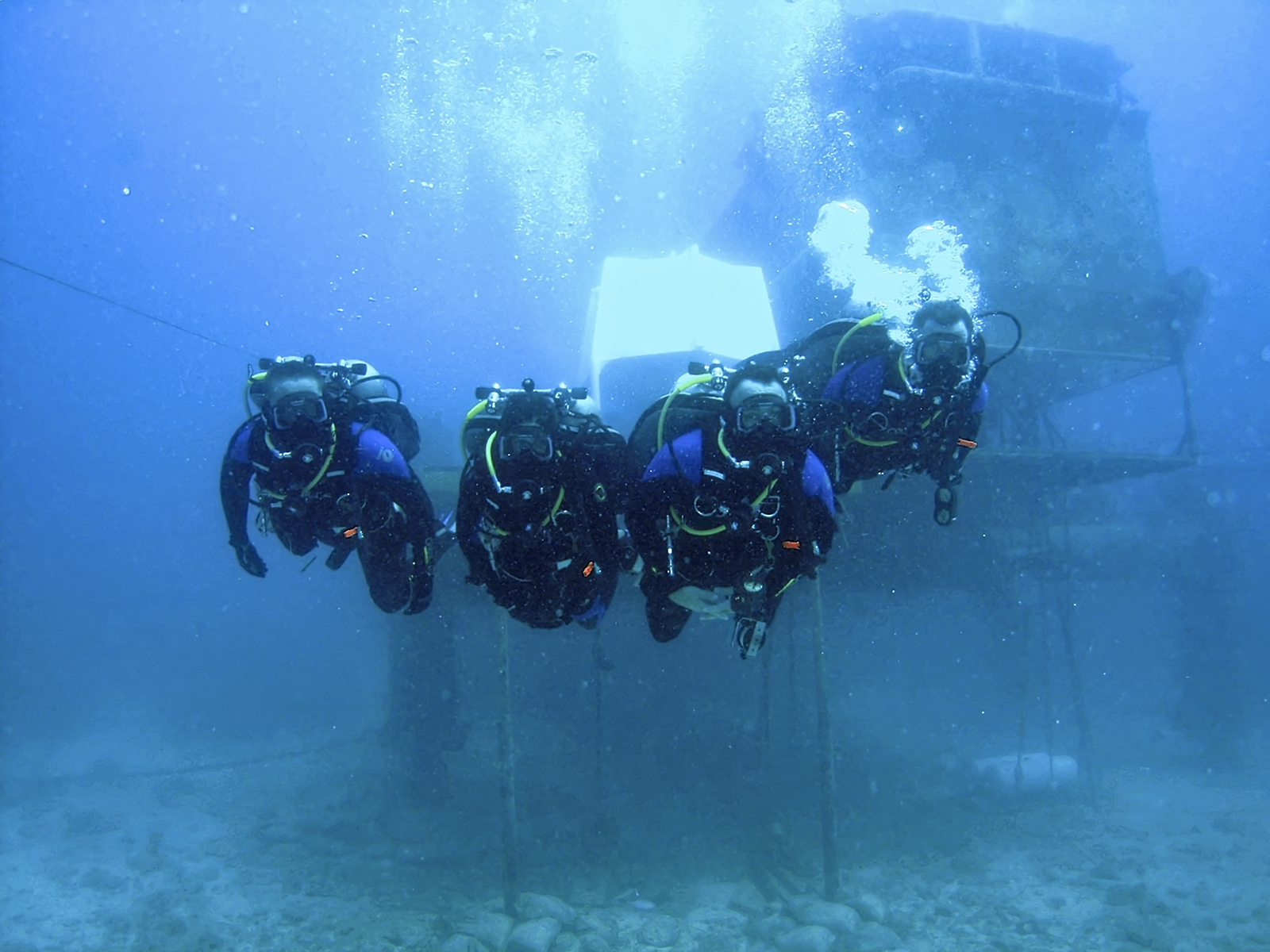 Williams (far right) diving with his crew outside of the underwater research station Aquarius, off the Florida coast. The NASA Extreme Environment Mission Operations (NEEMO) sends groups of astronauts, engineers and scientists to live and train at Aquarius to simulate the conditions on the International Space Station. (Photo courtesy NASA)

A Lifetime in a Moment

TIME IS INFINITE. Our lives are not. We all know this and the older we get, the more we feel it. As a child, time was something I never really thought about. Days seemed to last forever, filled with continuous activity and new experiences. As I got older, time didn’t change, but I did. Days, months, years, whirled by in a flurry of activity. It’s so easy to become complacent. But moments can last forever, if we remember to pay attention to them.

Ted Rosenthal, the late poet and author, put it best when confronted in his thirties with his imminent death: “You can live a lifetime in a moment.” A lifetime in a moment. That means an hour, a day, a conversation, or an encounter can be as rich and fulfilling as an entire lifetime, but only if we’re mindful and self-aware enough to truly embrace the gift of every second we spend on this earth.

I first heard Ted’s message years ago when I was in medical school. At the time, I thought I fully understood it. Since then, I’ve always tried to live my life to the fullest. But it wasn’t until much later, when I was outside the space shuttle Endeavour during my second space walk, that I lived Ted’s words. In that moment I understood what Ted meant. It was a moment that will stay with me forever.

It was August 8, 2007. I embarked upon STS-118 as a mission specialist aboard the space shuttle Endeavour. This was my second voyage into space, but that didn’t make it any easier. This was after the tragic loss of seven crew members on the Columbia in 2003, when the shuttle disintegrated during reentry. Those men and women were incredible astronauts. They were also my friends.

This was my second voyage into space, but that didn’t make it any easier. This was after the tragic loss of seven crew members on the Columbia in 2003, when the shuttle disintegrated during reentry.

The night before my departure, I said good-bye to my wife, Cathy, and my two amazing kids.

“So I’ll see you in two weeks?” Cathy said to me as she kissed me.

“Looking forward to it,” I replied. We both understood the risks of this trip.

Finally, the moment of the launch arrived. I was ready. With launch preparations completed, I was strapped into the shuttle with my crewmates, and the final countdown was rapidly nearing completion. “Three, two, one, zero. We have ignition, and liftoff.”

The crackling boom of the solid rocket boosters was followed by a blinding flash. The raw power threw me back and forth against my restraining harness, and my body was thrust back as we rocketed into the sky. I’d felt it all once before, but that didn’t matter. Every time was new. The bouncing and shaking eventually subsided, and a few minutes later I saw the checklists floating around me. I turned to my fellow mission specialists, Barb Morgan and Al Drew, and flashed a thumbs-up.

The trip to reach space lasted only a few minutes, but we still had a two-day journey ahead of us to get to the International Space Station (ISS). During that time, we inspected the orbiter tiles and prepared for our rendezvous, but the real work began after we docked.

On August 13, six days into our trip, it was time to complete one of the primary goals of the mission: a space walk to replace a faulty gyroscope on the space station. Although I didn’t know it then, by the end of the trip I would log more than seventeen hours of spacewalking, achieving a new Canadian record. But I didn’t care about records. What I cared about was making sure we got the job done and were able to return to the station without issue.

On this walk I was accompanied by one of my crewmates, Rick Mastracchio. It’s no small task to leave the relative safety of the space station, remove damaged equipment, and install a brand-new 1,200- pound gyroscope in the vacuum of space. To make it over to the shuttle — which was docked to the U.S. lab at the center of the station — I rode on the end of the Canadarm2. Charlie Hobaugh, who went by his call sign “Scorch,” was our pilot. He had the job of controlling the robotic arm. With precision rivaling that of a neurosurgeon, he moved me from one part of the space station to another, down to the payload bay of the space shuttle, and back to the station.

Rick and I made it out of the station airlock successfully and removed the failed gyroscope together. Teamwork is always critical for success. The next step was to install the new gyroscope, a task that required a complex choreography between the robotic arm and the two of us.

Mission specialist Tracy Caldwell was watching our progress from the station’s flight deck window and calling out the checklist procedures.

“Roger,” I responded. “I’m attached to the gyroscope. I’ve removed my local tether.”

I started slowly moving in space, anchored only by the foot restraint on the end of the Canadarm2, carefully holding on to the 1,200-pound gyroscope. If my grip slipped or I lost control, the mass of the gyroscope could pull me out of my foot restraint. That would mean two freely floating objects in space — me and the gyroscope. Either of us could collide with the station or shuttle. That was not a scenario anyone wanted.

“Ready for motion,” I said to Scorch, meaning I was ready for him to guide me and the gyroscope back to the station. Though I said I was ready for motion, actually I felt growing concerns about holding this enormous piece of equipment with two hands, secured only by my feet, which were attached to the end of a robotic arm on a space station traveling at 17,500 miles per hour. But that’s what astronauts spend years training for.

Scorch must have sensed my unease. “Dave, just remember: this is not a jettison task.” His wry sense of humor was well-known among us. Despite the stress of not wanting to make a mistake, I was grinning from ear to ear underneath my reflective space helmet. 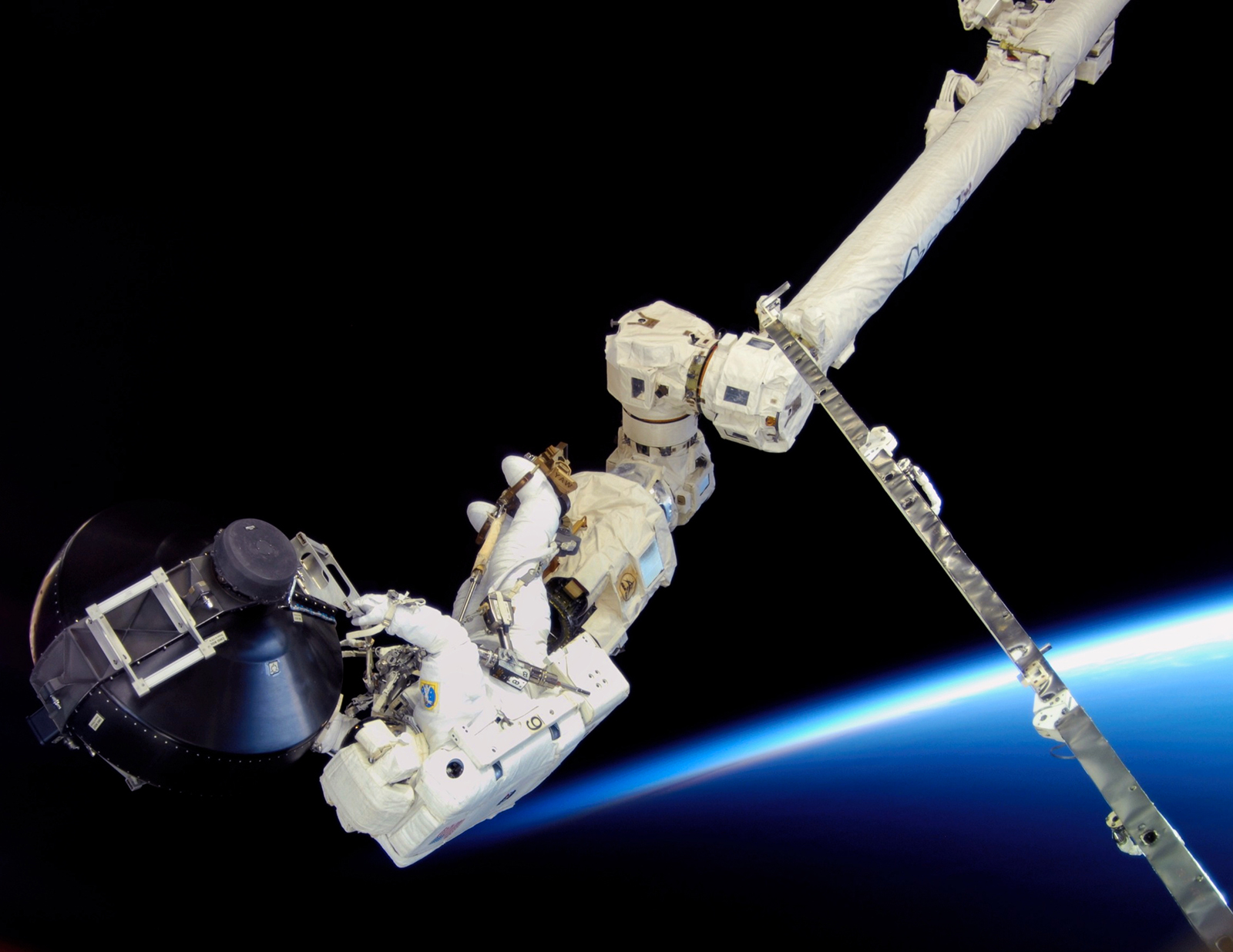 Anchored to the end of the Canadarm2 with a new gyroscope. It was a memorable ride during the six hour, 28-minute space walk. (Photo courtesy NASA)

The Canadarm2 began to move, pulling me away from the shuttle’s payload bay and back toward the station. At that moment I was fully focused on gripping with my hands and feet. Everything was going according to plan.

Halfway through my ride, Scorch had a question for me. “How’s the view out there?” he asked. Leave it to Scorch to ask a question like that. The giant spherical gyroscope was right in front of me, occupying my entire field of vision.

“I’ve got a face full of gyroscope right now, Scorch. I can’t see anything else.”

But the truth is, earlier on the journey to the payload bay, I did get my chance to take in the view. And it was spectacular — life altering, in fact. I will never forget the amazing epiphany of looking down and seeing our 4.5 billion-year-old planet, a beautiful blue oasis, cast against the endless black expanse of outer space.

There it was: my home; home to us all. The entire history of humanity had taken place on the planet beneath me. Minus my crewmates, everyone I cared about was down there. Everything that had ever happened to me had taken place there. From my distant vantage point, there were no boundaries evident, no divisions between countries, only majestic continents surrounded by deep-blue oceans.

It was then that I finally understood what it means to live a lifetime in a moment, to appreciate every second you’ve lived and every second you still have to live. I was filled with gratitude for everything — for my life, for my friends and family, for the chance to see what only a few others had seen before. In that instant it reinforced for me Ted’s message: there is no better way to defy the limits of time than by living in the moment. It’s a lesson for all of us to live our lives to the fullest while we can, to embrace the richness of our experiences, to stop wondering what our legacy will be and instead live it right now.

Defying Limits is available through Simon & Schuster and book retailers such as Amazon and Indigo.