Six amazing things RCGS Fellows are up to in summer 2019

From pulling drinking water out of desert air to riding with eagle hunters in Mongolia, see what just a few of The Royal Canadian Geographical Society’s more than 1,000 Fellows have been working on lately
By Nick Walker
July 29, 2019

A device from Dorval, Que.-based company AWN Nanotech converts humidity to potable drinking water using almost no energy. Known as an “atmospheric water generator,” or AWG, the device employs technology originally developed by researchers at Simon Fraser University in Burnaby, B.C. in 2016. AWN Nanotech’s founder, Richard Boudreault, a biochemistry professor at École Polytechnique in Montreal, says his product offers a solution to water shortages in countries around the world. His inspiration came from observing the Mediterranean nation of Malta, one of the most water-scarce countries in the world.

The “awn” in the company’s name refers to tiny hairs found on some species of cactus that condense and collect water molecules in the air. The company’s high-tech cloth fibre (the integral component of their AWG), meanwhile, is specifically engineered to mimic the absorption capabilities of the skin of thorny devil lizards, which pulls moisture from the environment into the lizard’s mouth. Each square metre of Boudreault’s textile can convert up to 12 litres of water per hour, depending on humidity. “We are mimicking — or biomimicking — techniques from different beings,” says Boudreault. “Cacti and lizards and other types of animals that have adapted to living in a very dry environment.”

Read more about this innovation and its potential for use in Canada's remote Indigenous communities, and in countries and regions dealing with a variety of water crises.

Calling women explorers to join an expedition to Norway’s fiords

Every winter, snorkellers and wildlife enthusiasts alike witness one of the greatest spectacles on the planet — orcas and humpbacks congregating in Norwegian fiords, some 350 kilometres north of the Arctic Circle, to feed on vast schools of migrating herring.

The multi-year Sedna Epic Expedition is seeking women ocean scientists, explorers, photographers, movie-makers, artists, writers, historians and educators to participate in a women’s leadership program and a winter snorkel expedition to Tromsø, Norway, November 15-25, 2020. The Sedna Epic is partnered with Waterproof Cruises & Expeditions, who will provide local snorkel guides and a live-aboard vessel, the MV Freya.

While in Tromsø, the expedition’s leadership program will discuss women’s growing representation in exploration and STEMM careers. Team Sedna, which includes Inuit team members and advisors, will collaborate with Sami women and girls, gaining insights into this part of the Arctic, its history, geography, and the culture and traditions of its Indigenous peoples. 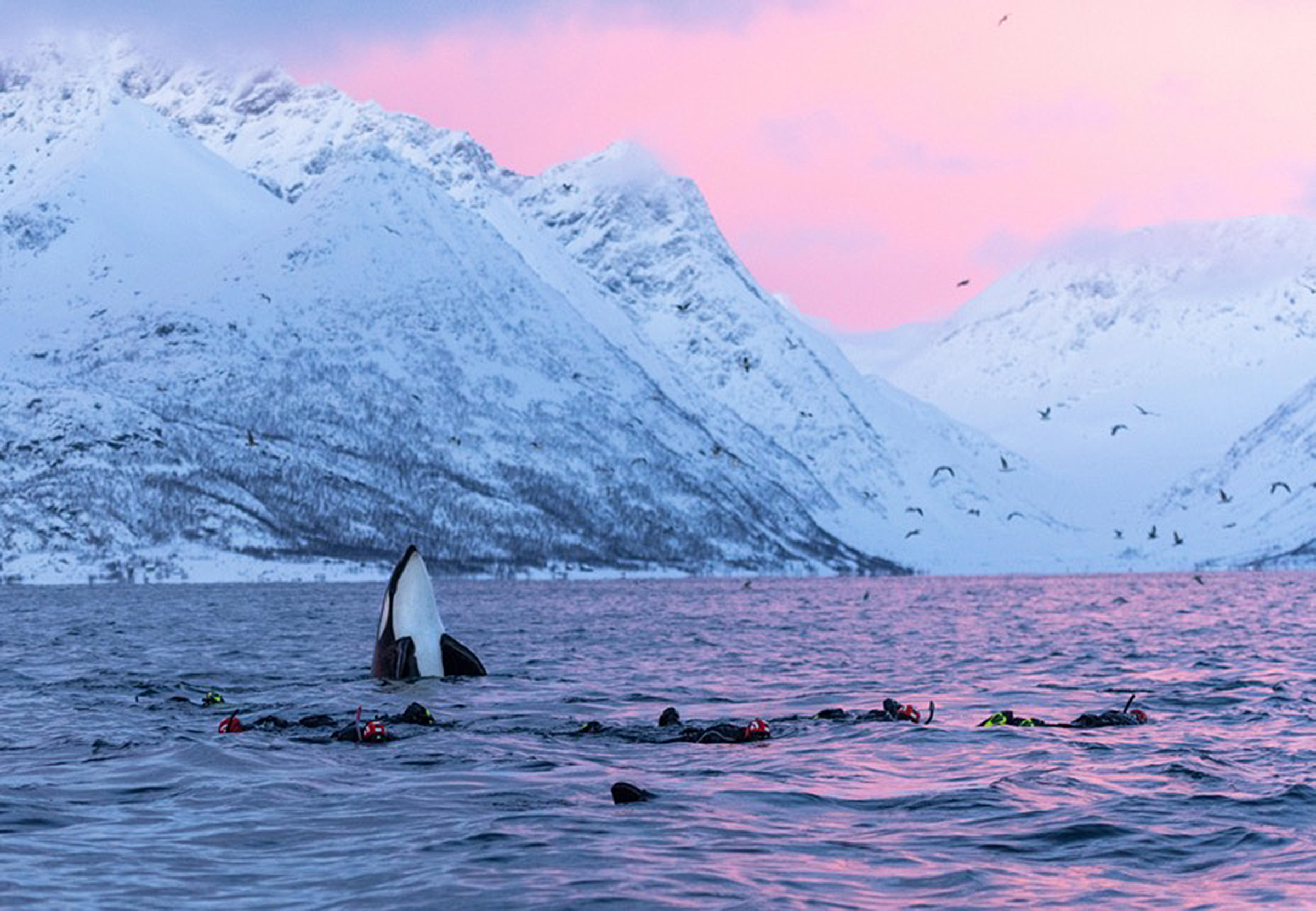 Tracking the impacts of climate change to the Marshall Islands

In April, James Raffan, northern explorer, author and director of external relations for the Canadian Canoe Museum, traded his long underwear for a full-body UV suit and headed halfway around the world to join a small team creating the first comprehensive atlas of the Pacific Marshall Islands. Travelling in a 15-metre Polynesian sailing canoe, this was a different kind of “canoe trip” and an exciting new line of inquiry for Raffan. While visiting Utrik, Taka, Bikaar, Bokaak, Bikini, Ailinginae, Rongelap and Rongerik atolls, he assisted as a cultural geographer with atlas data collection, but also conducted his own research as a writer and documentarian, contrasting the natural and cultural impacts of climate change in the Central Pacific with those he has observed and reported on over the years from the Circumpolar Arctic. In addition to pride in long association with the RCGS as a Fellow and past governor, Raffan flew the flags of the Canadian Canoe Museum and the Explorers Club from the shrouds of the Okeanos Vaka Motu for the 27-day duration of this ambitious open-ocean voyage.

Photographer Debra Garside put her equestrian background to good use on a recent expedition to Mongolia. During three days of riding in the Altai Mountains Kok-adar Range (2,900 metres) in the province of Bayan-Olgii, Garside was privileged to document several master eagle hunters as they trained and hunted with their golden eagles by horseback. The tradition of falconry with eagles has changed little in thousands of years and there are few places left where the semi-nomadic hunters still practice this art. Garside is returning to Mongolia for six weeks in the fall to continue her documentation of vanishing cultures. 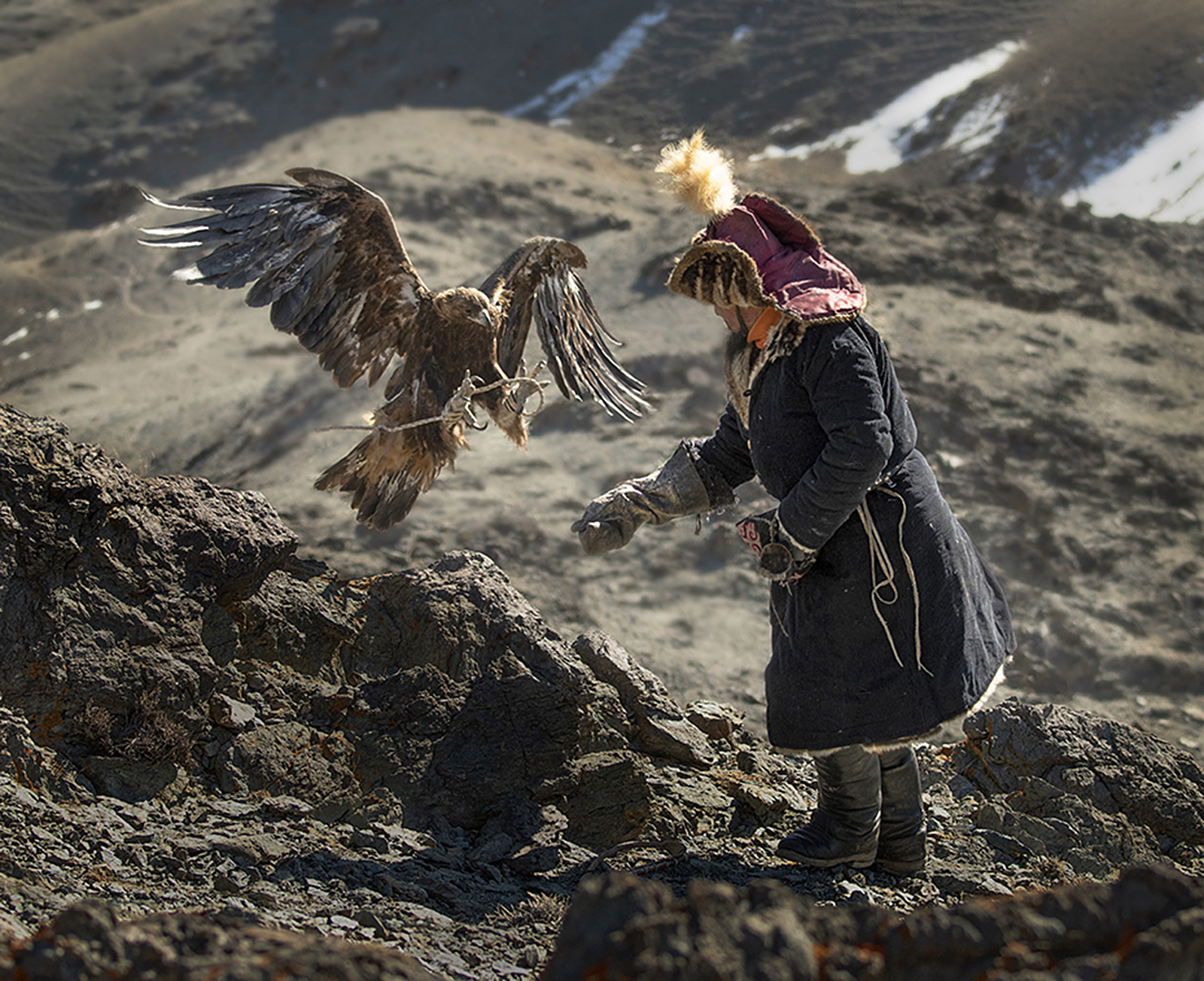 Preparing to overwinter on Svalbard

In August 2019, experienced expedition leaders Hilde Fålun Strøm and Sunniva Sorby will embark on a nine-month overwintering project in the High Arctic of Svalbard, Norway. The “Hearts in the Ice” project will see the pair inhabiting a 20-square-metre trappers’ cabin (named Bamsebu) at 78’N and engaging people around the world on climate change. They will be the first women to overwinter in Svalbard without men.

The project will serve as a platform for global dialogue and engagement concerning how changes in the polar regions impact the world and what we all, individually, might be able to do about it. Life at Bamsebu will be broadcast and published via Iridium satellite through social media to scientists, adventurers, students and interested citizens around the world.

While at Bamsebu, Strøm and Sorby will serve as citizen scientists by collecting data for ongoing research projects in the Arctic, a few of which will also be conducted simultaneously in the Antarctic and shared on social media. The pair will be pioneers in using electric snowmobiles, and will create the smallest carbon footprint possible by utilizing solar and wind energy and reducing all packaging from their suppliers and providers. 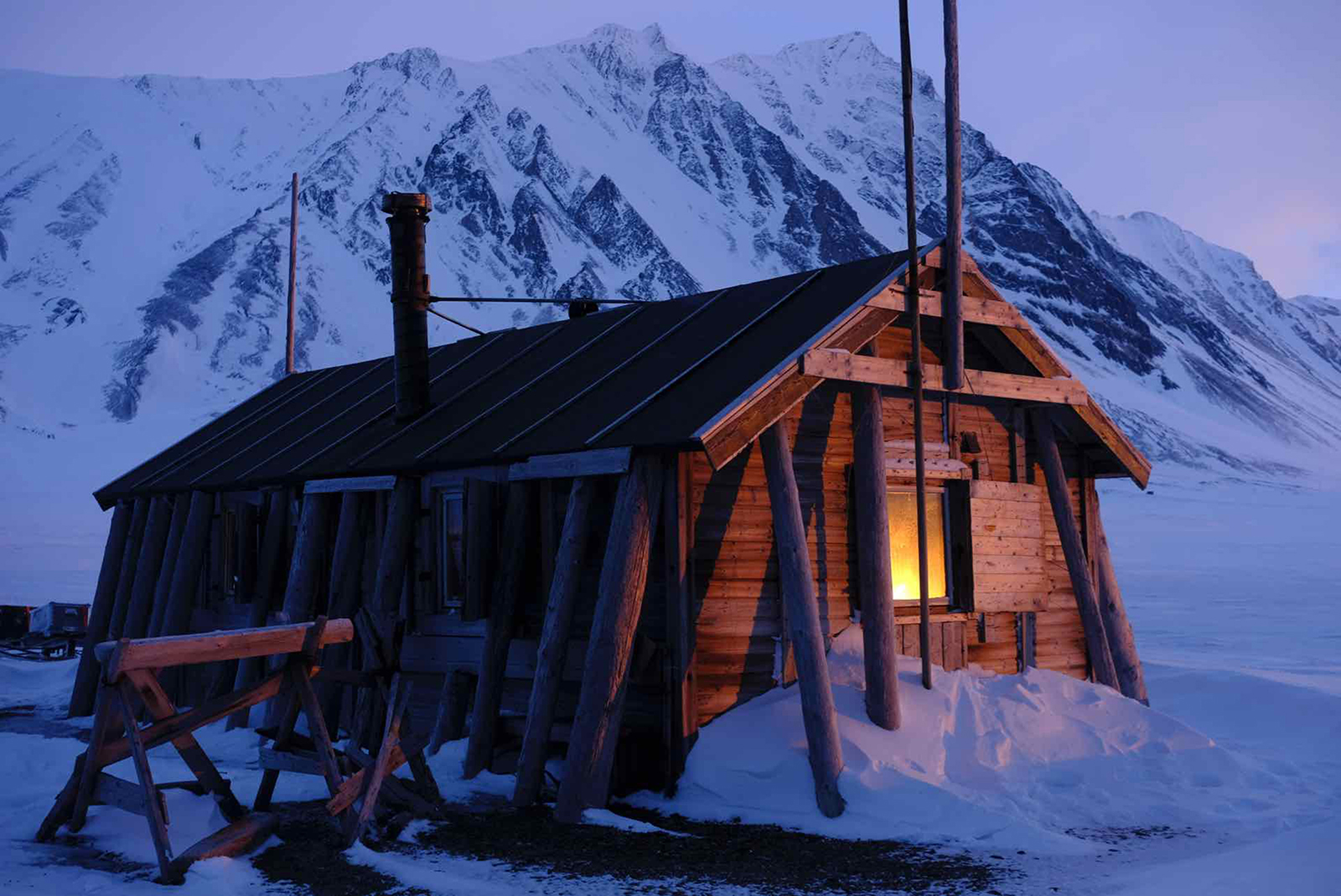 Bamesbu, in Svalbard, Norway. (Photo: Hearts in the Ice)

For decades, social and behavioural scientists have studied the psychology of people in various isolated, extreme, remote environments to gain an idea of the possible effects of spaceflight — especially for long-duration missions on Skylab, Mir and the International Space Station. But the actual benefits of using terrestrial environments such as polar stations, submarines and deserts as analogues of space capsules have never been properly established.

In his article “Antarctica and space as psychosocial analogues,” Peter Suedfeld looks at the evidence for the first time and suggests ways to test that assumption. There are similarities, to be sure — from the potentially lethal nature of the external environments to daylight and darkness cycles to the monotony of living in a capsule with little privacy — but researchers should more carefully consider the usefulness of the experiences of those involved, and put less stock in the general environmental similarities. For example, there are major differences from one Antarctic station to another, such as population size and, depending on the location of the station (Antarctic interior versus peninsula), tolerability of the climate.

“Assuming [Antarctic stations and spacecraft] to be analogues is attractive to both researchers and space agencies as an economy measure: research in space is expensive, complicated, and limited in research time, facilities, and subjects,” writes Suedfeld. “Although research in Antarctica has some of the same problems, they are much less severe there. Data from multi-year studies conducted in the two environments should compare both the stressful and adverse and healthful, positive effects of the two environments on human psychology in order to evaluate this question.” 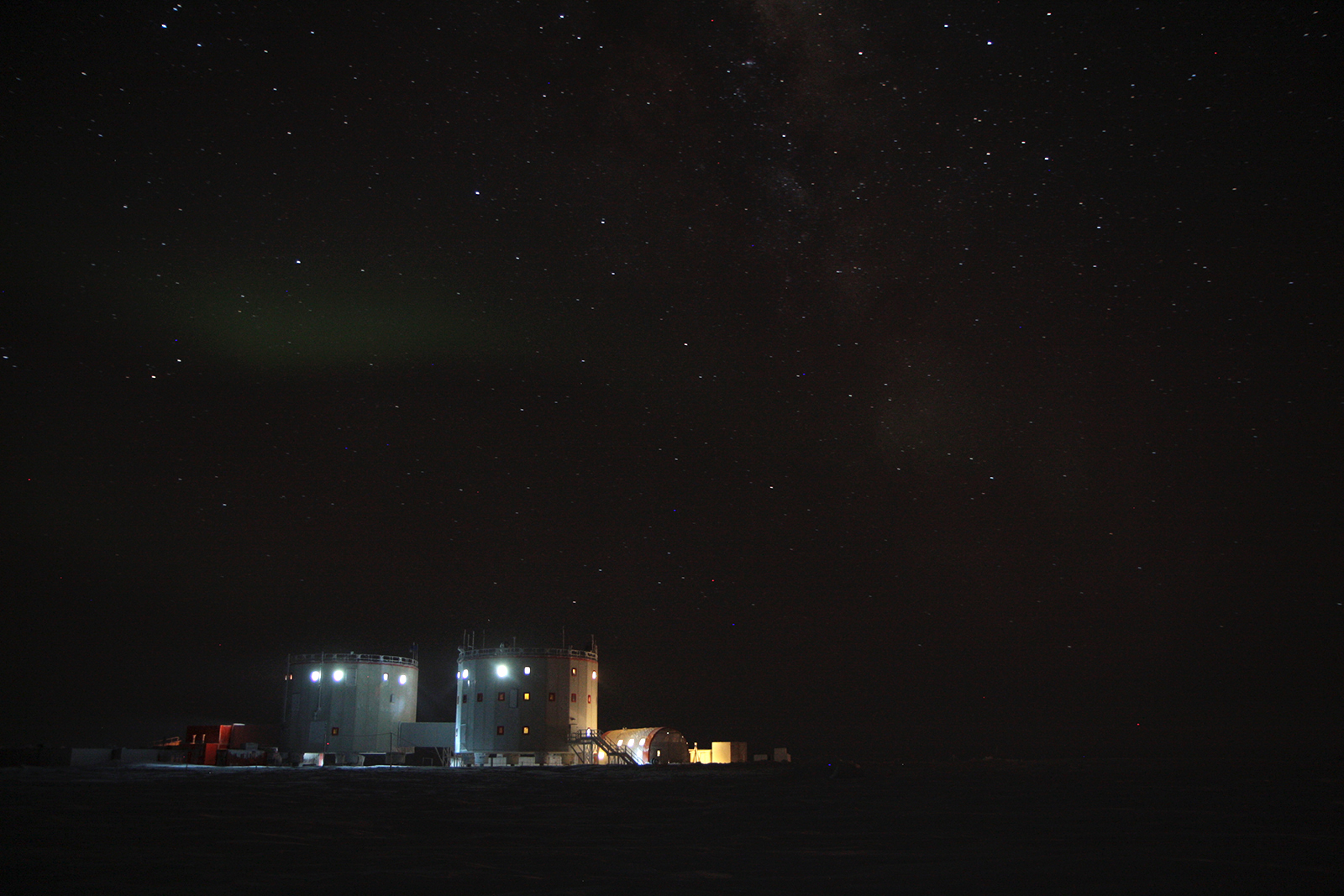 Darkness can last for half the year at Antarctic research stations such as Concordia — just one of the many factors that can contribute to stress and changes in behaviour. (Photo courtesy ESA/A. Salam)