Shoalts: What lurks beyond the flicker of the firelight?

An explorer unravels the story of an early 20th century haunting in the isolated foothills of Labrador’s Mealy Mountains
By Adam Shoalts
September 14, 2021

Since the dawn of time, humans have told stories of strange and scary things that lurk in the darkness, beyond the flicker of the firelight. Our earliest ancestors, huddled in caves or simple shelters, feared the sunset, when darkness descended and most large predators became active. Some of the oldest cave paintings ever found depict nameless monsters that apparently hungered for human flesh. Cultures all over the world held similar beliefs about the darkest depths of the woods, remote mountain passes or inaccessible caves being home to flesh-eating trolls, giants, ogres or other frightening things.

In traditional Chinese folklore, Jué yuan were large, hairy monsters said to live deep in the mountains and abduct humans. To the north, in the barren wastes of the Mongolian deserts, local legend spoke of the dreaded olgoi-khorkhoi — the Mongolian death worm, which was supposedly so dangerous that even to touch it meant instant death. Meanwhile, in the steamy swamps of Australia, Aboriginal storytellers told of the fearsome bunyip, a terrifying creature with a call so frightening it struck paralyzing fear into the hearts of all who heard it. Half a world away, among peaks of ice and snow, the Sherpa people believed that the yeti lurked. Scandinavian traditions recount that hideous trolls haunted the northern woods and secluded mountains. In the legends of the Congo rainforest, Mokèlé-mbèmbé was reputed to be a horrifying creature that inhabited remote jungle lakes. In southern Africa, among the Zulu and Xhosa, tales were recited of the fearsome Inkanyamba, a giant river monster that prowled beneath waterfalls. Much has been made of the divide between different cultures, but at least on the subject of monsters lurking in the darkness, it seems people agreed. 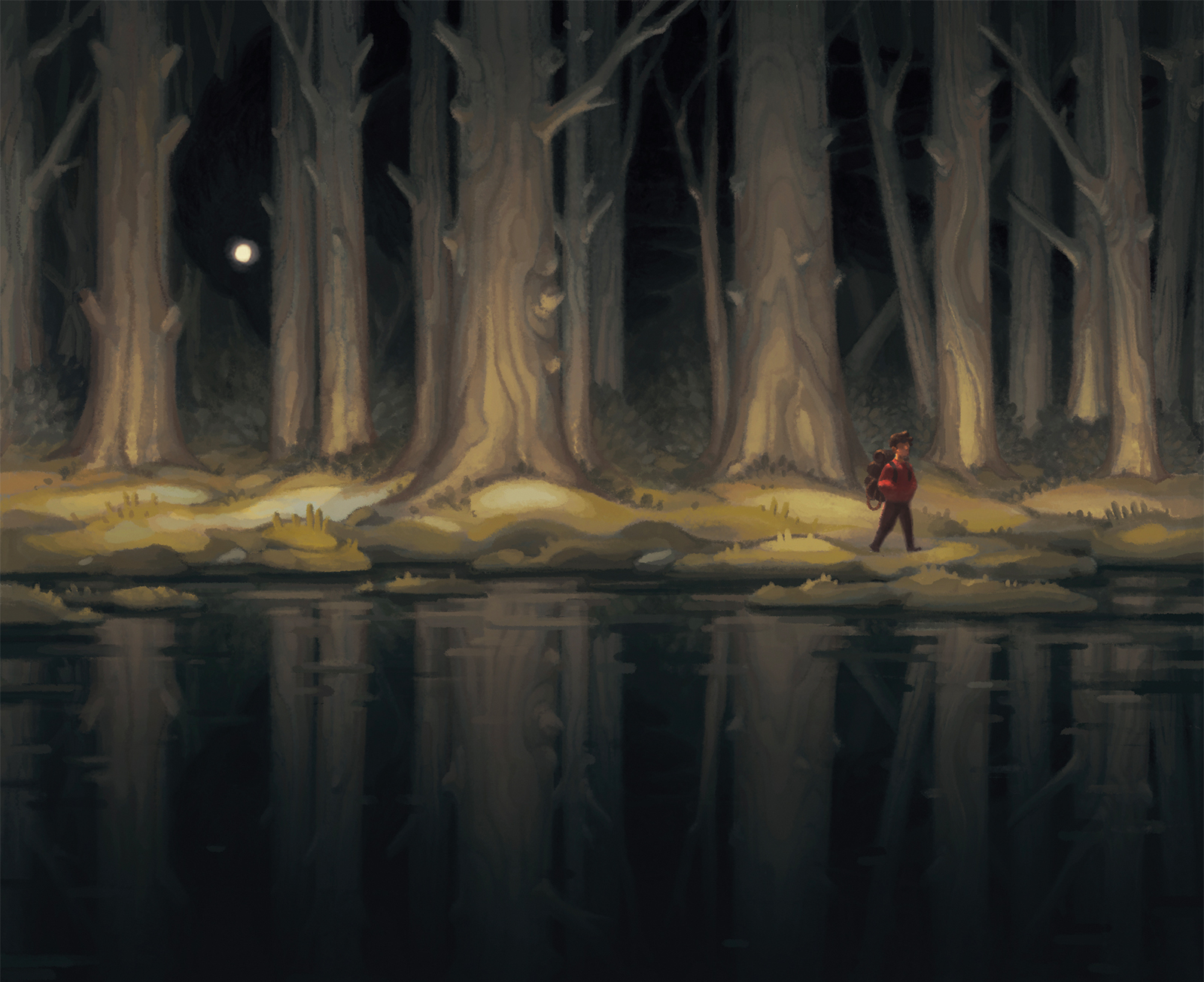 Canada, with its vast wilderness of primeval forests and thousands of snow-capped mountains, is particularly rich in this kind of lore. My own passion has long been for quiet, lonely woods and other wild places. It’s a habit I first developed in childhood while exploring the woods that surrounded our family home. I love wandering for months without coming across a road or town. By 2019, my wanderings had taken me to nearly every corner of Canada’s immense wilderness. I’d rambled among the ancient hills of northern Quebec and Ontario, paddled the Subarctic rivers, trudged through the swamps and bogs of the Hudson Bay Lowlands, bounded along ice floes in the High Arctic, explored the western mountains, and crossed nearly 4,000 kilometres of Canada’s North alone. Inevitably, in pursuing such journeys and adventures, I’d heard my share of campfire legends.

I’d listened on mountain slopes to rumours of sasquatch tracks and the caves they were said to occupy. In the vast swamps surrounding James Bay, I’d heard about strange tracks found in the moss that no one could identify. But most of these stories seemed intangible. They usually followed a similar pattern — the account is vague and the storyteller often doesn’t claim to have personally seen the thing but knows someone who has. After all, in such remote places, it isn’t easy to corroborate such claims. Most wilderness “monster” stories fall into this category: they were made long ago in isolated locales by a single source, far from any other literate observer and with no possibility of cross-referencing them.

To take, for instance, a classic example: in 1811, in the dead of winter, the fur trader David Thompson, considered by some to be the greatest mapmaker who ever lived, was snowshoeing with his men through the windswept Athabasca Pass. The surrounding mountains, according to legend, were home to a dreaded creature that Thompson’s voyageurs called “the Mammoth.” Thompson noted that his party came across the tracks of a large, unknown animal. With characteristic precision, Thompson reported the tracks in detail:

“January 7: Continuing on our journey in the afternoon we came on the track of a large animal. … I measured it; four large toes each of four inches in length to each a short claw; the ball of the foot sunk three inches lower than the toes, the hinder part of the foot did not mark well, the length fourteen inches, by eight inches in breadth, walking from north to south, and having passed about six hours. We were in no humour to follow him; the Men and Indians would have it to be a young Mammoth and I held it to be the track of a large old grizzled Bear; yet the shortness of the nails, the ball of the foot, and its great size were not that of a Bear, otherwise that of a very large old Bear, his claws worn away; this the Indians would not allow.”

Thompson further explained of the incident:

“As the snow was about six inches in depth the track was well defined, and we could see it for a full one hundred yards from us. … We did not attempt to follow it, we had no time for it, and the Hunters, eager as they are to follow and shoot every animal made no attempt to follow this beast, for what could the balls of our fowling guns do against such an animal. Report from old times had made the head branches of this River, and the Mountains in the vicinity the abode of one, or more, very large animals, to which I never appeared to give credence; for these reports appeared to arise from that fondness for the marvellous so common to mankind; but the sight of the track of that large beast staggered me, and I often thought of it, yet never could bring myself to believe such an animal existed, but thought it might be the track of some monster Bear.”

Although Thompson reiterated his suspicion that this creature “might” have been a “monster” bear of more than ordinary size, doubts about it continued to weigh on his mind. He admitted that while the “circumstantial evidence” was “sufficient,” there was as yet “no direct evidence of its existence. Yet when I think of all I have seen and heard, if put on my oath, I could neither assert, nor deny, it’s [sic] existence.” Thompson added that, when moving through the mountain pass, “we hasten our march as much as possible.”

While Thompson’s story from more than two centuries ago is fascinating, skeptics can easily dismiss it as little more than a good campfire story. After all, who’s to say Thompson didn’t simply make it all up? Conversely, it’s equally plausible that what Thompson and his voyageurs encountered were simply grizzly bear tracks — just as Thompson’s skeptical side suggested. No doubt many a wilderness legend could be explained away in similar terms. I never took such legends too seriously as far as my own expeditions went — or at least, at any rate, they didn’t much trouble my sleep in the wild.

That is, until the one that I stumbled across one cold winter’s evening alone in my study, my desk piled high with old maps and books. I was neck-deep in research to complete a PhD in history from McMaster University, studying some old exploration accounts and fur trade records. My primary focus was on Western Canada, but as frequently happens, one reference led to another, and having strayed in my reading I picked up a curious old volume about Labrador, that wild land of mystery and legend. The story dated back to a time when light came from the flicker of a candle or the blaze of a spruce fire, when a person had to rely on their own strength and wits for survival.

In the early 1900s, an isolated homestead near the foothills of the remote Mealy Mountains in central Labrador was the scene of an extraordinary haunting by large creatures none could identify. Strange tracks were found in the woods. Unearthly cries were heard in the night. Sled dogs went missing. Children reported being stalked by a terrifying grinning animal. Families slept with cabin doors barred and axes or guns at their bedsides. The eye-witness accounts were detailed, and those who reported them included no less than three medical doctors and a wildlife biologist.

Reading the passages I’d unearthed, my mind fixated on that mysterious place on the old map, and the little-known mountains that surrounded it. Gradually, as I accumulated more and more evidence that the skeptical side of me couldn’t quite dismiss, I found myself, almost against my better judgment, leaning toward the possibility that something terrifying really did plague that isolated place. The locals believed the creature that had plagued them was from the netherworld, a supernatural demon.

And so, I decided to investigate further. There was only so much I could glean from old accounts. Tracing my fingers across the faded map, I resolved to set off for Labrador to see if I could find any trace of this legend — and, from there, plunge into the surrounding mountains.

The story of what I found is told in full in my new book, The Whisper on the Night Wind: The True History of a Wilderness Legend, which is available for pre-order now. 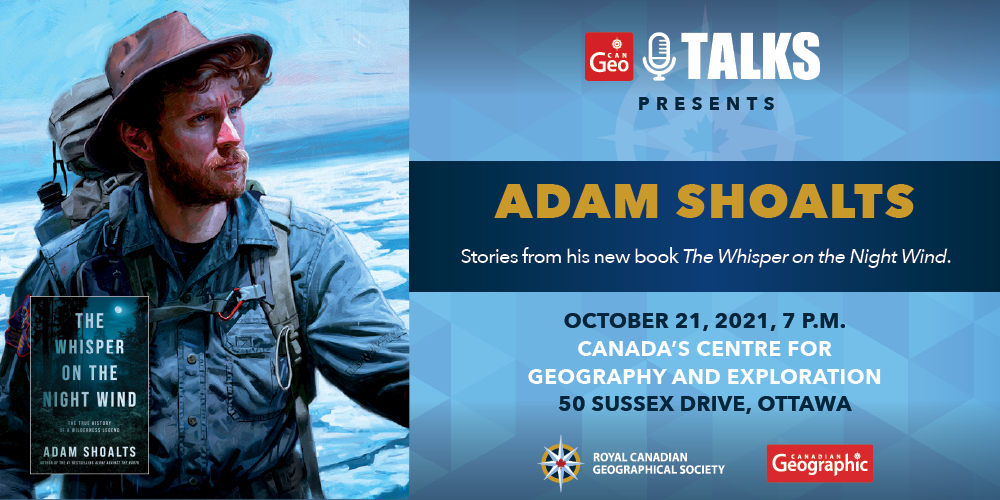 COVID-19 NOTE: Canadian Geographic and the Royal Canadian Geographical Society will adhere to all local and provincial pandemic guidelines for this event. In the event of cancellation, all ticket purchases will be refunded in full.