Seven amazing things RCGS Fellows are up to this year

From documenting rock-hewn churches in Ethiopia to sonar-scanning B.C. waters for steam-era shipwrecks, see what just a few of the RCGS’s more than 1,000 Fellows are working on in 2018
By Nick Walker
February 8, 2018

In 2017, Russell Clark and Trisha Stovel launched Beneath BC, a non-profit online project aimed at making underwater Canada better known to Canadians through a wealth of videos, images and shared stories. While the focus at this stage is British Columbia — where the pair lives and dives professionally and for fun — their objective is to expand over time to become “Beneath Canada,” and to appeal not only to divers, but also to non-divers. Through video clips of marine life encounters, adventure photos, blog posts and their trademark “Minimentary” videos, Clark and Stovel want people to discover a side to B.C.’s oceans, rivers and lakes that they probably haven’t yet realized exists. 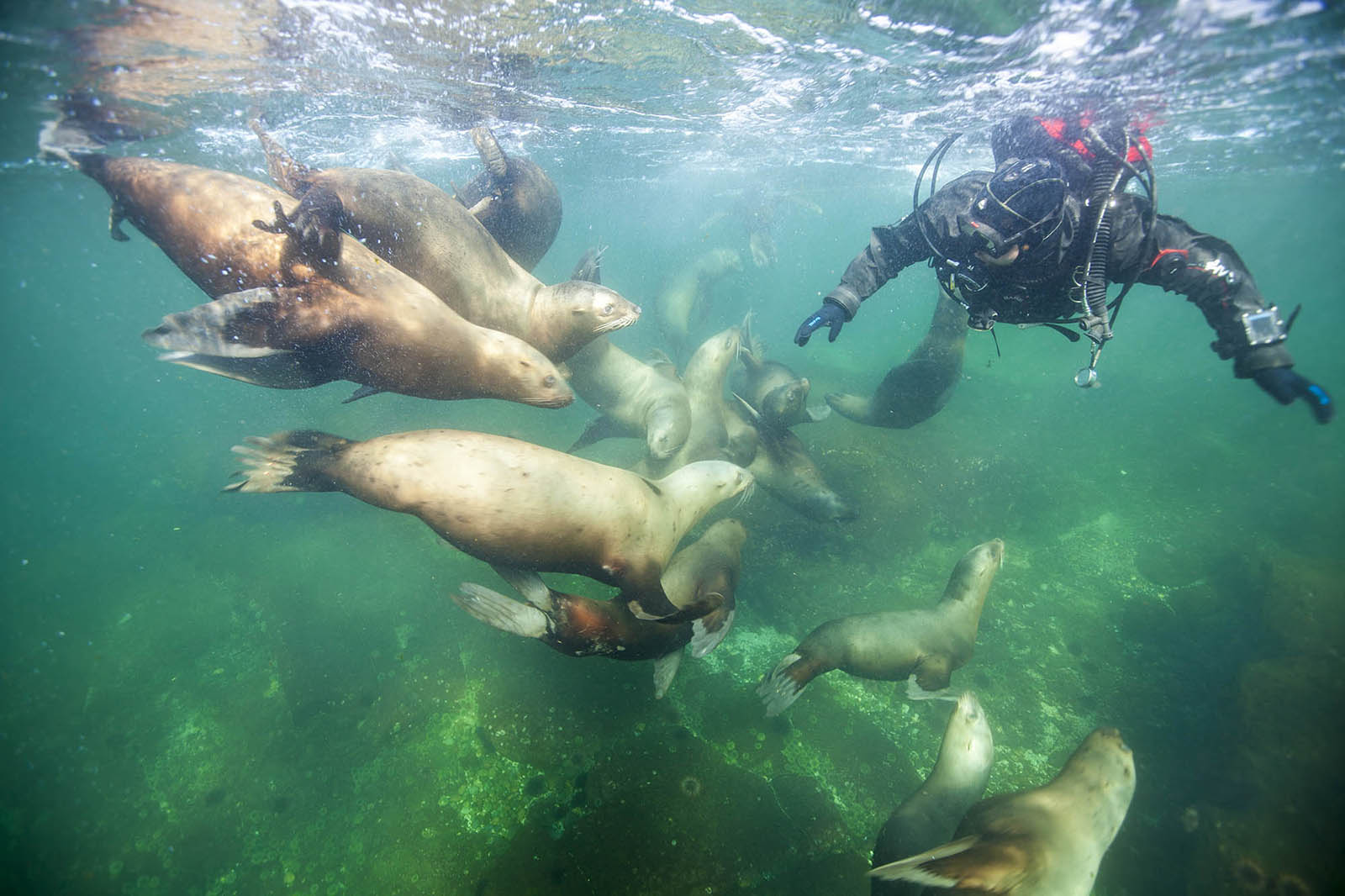 Frolicking with sea lions off the coast of Vancouver Island, near Comox. (Photo: Russell Clark)

In 2015, Michael Gervers, a professor of historical and cultural studies at the University of Toronto Scarborough, received a grant from the U.K.-based Arcadia Fund to digitally preserve the knowledge and techniques involved in the making of Ethiopia’s rock-cut churches, some of which are ranked among the world’s finest examples of monumental stonework. Since then, he’s travelled to Ethiopia three times and uncovered 20 modern rock-hewn churches across the country. Although there are hundreds of such churches in Ethiopia, some dating to the 12th century, the fact that the practice has continued to this day in some corners of the country was unknown even to experts in Ethiopian culture. In recognition of his research, Prince Ermias Sahle-Selassie Haile-Selassie, the grandson of the country’s last ruling emperor, awarded Gervers the Grand Cross of the Order of the Star of Ethiopia.

Left: Gervers examining a cliff face in Ethiopia. The practice of carving churches out of rock (right) — using only a hammer and chisel — goes back to the 12th century in what is now Ethiopia. (Photos: Michael Gervers)

Joe Grabowski, who started the non-profit Exploring by the Seat of Your Pants as a way of bringing science, exploration, conservation and adventure into classrooms through virtual speakers and field trips, was recently named a top 50 finalist in the Global Teacher Prize, a $1 million award presented annually to an exceptional teacher who has made an outstanding contribution to their profession. The top 10 finalists will be announced in mid-February, with the winner being named about a month later at the Global Education and Skills Forum, held in Dubai in previous years. Grabowski was also selected as National Geographic’s first Education Fellow, a role which is taking him out of the classroom for the year to work on both Nat Geo projects and his own undertakings.

(Photo: Joe Grabowski/Exploring by the Seat of Your Pants)

Canada’s longest cave, Castleguard, is partly located under the Columbia Icefield in the Rocky Mountains. Over the last two decades, Greg Horne has made 11 trips to the cave, some 22 kilometres from the nearest road (adding up to nearly 500 kilometres back and forth). His latest trip was in December 2017, with members of the Alberta Speleological Society, to install a waterproof camera in the cave for the purpose of monitoring seasonal ice levels near its entrance. Changing ice conditions in recent years has caused access to be blocked by the ice. This camera, along with weather station data, may provide information for the development of a predictive model for the future.

Earlier in 2017, while working for the Wildlife Conservation Society Canada’s BatCaver program along with the program’s Alberta co-coordinator Dave Critchley (Northern Alberta Institute of Technology) and Alberta Environment and Parks Senior Wildlife Biologist Dave Hobson, Horne discovered a bat hibernaculum in remote northern boreal Alberta, outside the Rocky Mountains. Bats were counted and swabbed for DNA, temperature and relative humidity data-logging instruments installed and ultrasonic acoustic recorders deployed. The wildlife disease white nose syndrome has been the catalyst for accelerating the need to locate this critical habitat before the arrival of the disease in the West. 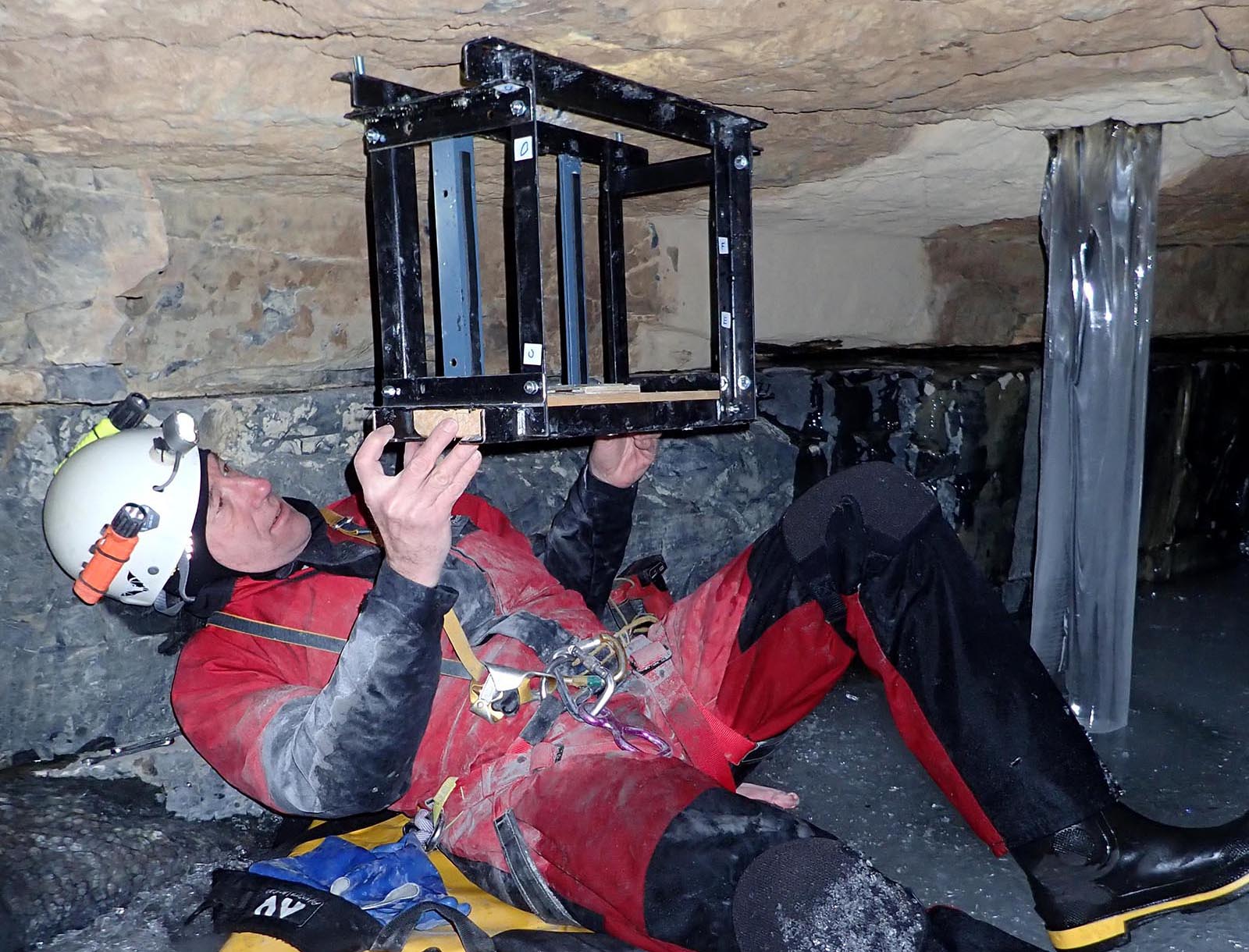 Setting up the camera frame in Castleguard. (Photo: Greg Horne)

Last year, RCGS Governor John Pollack, Fellow Harry Bohm and volunteers from the Underwater Archaeological Society of BC and the Institute of Nautical Archaeology conducted approximately 90 square kilometres of high-resolution side-scan sonar surveys in the southeastern corner of British Columbia. Pollack and the team used a STARFISH 452F CHIRP system for this multi-year inventory of late 19th- to early 20th-century steam-era wrecks associated with the CPR Lakes Division system on the larger lakes, and the pioneer stern wheel steamboats of the Upper Columbia River. The sonar unit is precise enough to image obscured wrecks missed in previously surveyed areas. Twenty-seven areas have been surveyed to date, four new wreck sites have been documented by divers and added to the inventory maintained by the BC Archaeology Branch, and another six targets remain to be confirmed.

Derek Wilton, a professor of earth sciences at Memorial University in St. John's, Nfld., is collaborating with the Nunatsiavut Government on a project that has significant implications for resource evaluation in the Canadian Arctic and near-Arctic. The remote Strange Lake area in Northern Labrador contains a world-class deposit of rare earth elements (strategic minerals used in a variety of high-tech applications, ranging from computer and smartphone screens to super magnets), inlcuding minerals that had never been seen prior to their discovery in the area's granite. Wilton aims to examine the mineralogy of these till deposits using sophisticated mineral-mapping technologies housed at CREAIT laboratories at Memorial, and to develop a regional exploration tool for rare earth elements that relates mineral mapping data from surface till around the deposit with satellite imaging.

Left: Boulder-filled till down-ice from the Strange Lake deposit. Rare earth minerals such as these (black, right), are visible in the only outcrop of the Strange Lake granite, which occurs in a trench at Strange Lake. (Photos: Derek Wilton)

Jacqueline Windh is returning to southernmost Chile in February to join an international expedition into the traditional territory of the Kawéskar people. On her previous travels to Patagonia, she worked with the Yagán, the southernmost Indigenous peoples in the world, to translate into English a book of stories told by the last speakers of the Yagán language. Both the Yagán and Kawéskar are canoe-going people, culturally similar to the coastal Indigenous tribes of Vancouver Island, where Windh lives.

On this trip, Windh will join an expedition led by Swedish forest ecologist Lars Östlund that includes a team of Chilean biologists and archeologists working on behalf of the Río Seco Museum of Natural History. They will search the forests along the shores of Magellan Strait for evidence of Kawéskar land use, such as trees that have been bark-stripped to make canoes. Windh hopes also to make it to the Kawéskar village of Puerto Edén, one of the most isolated human settlements on the planet. 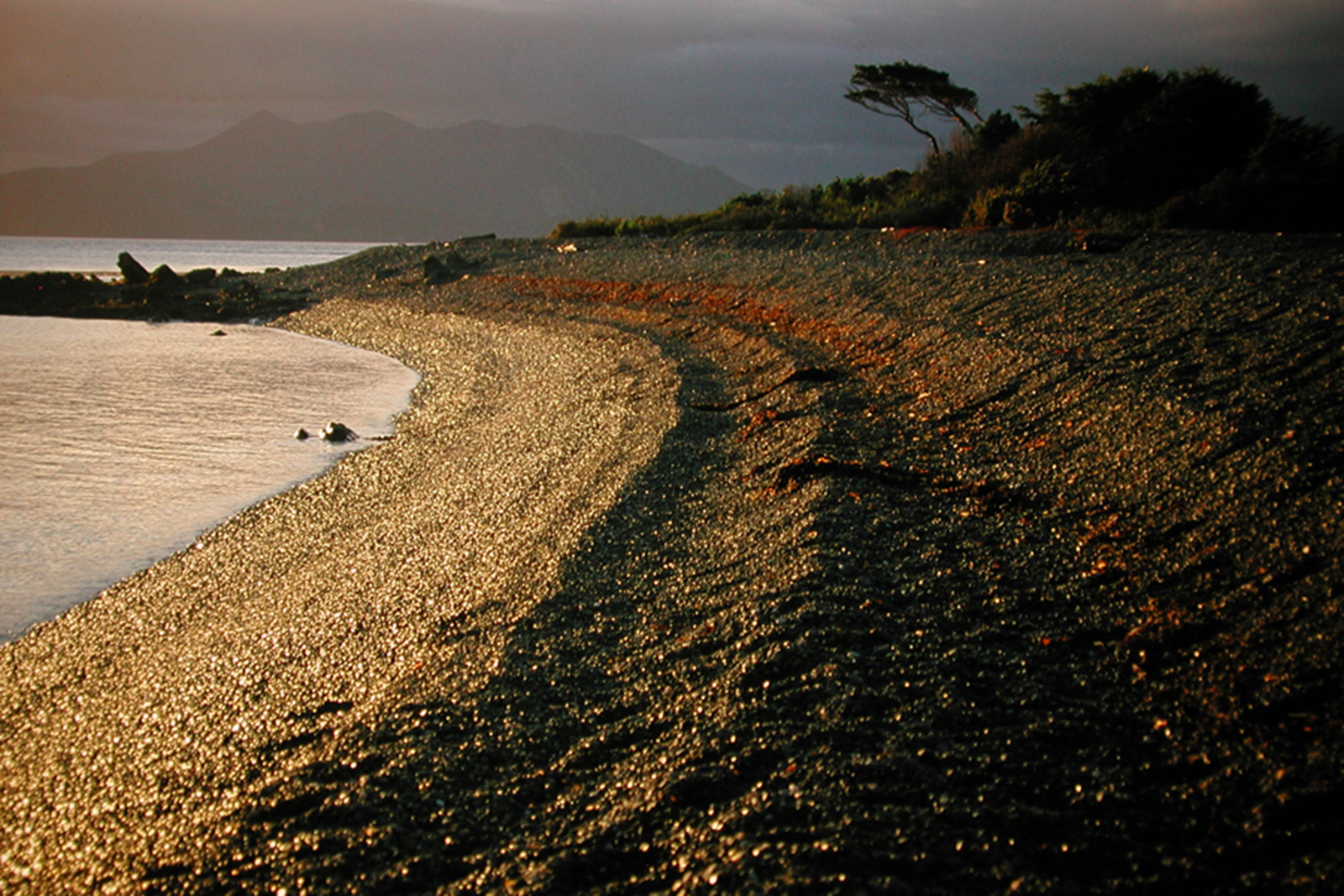