A Royal Canadian Geographical Society-supported expedition has added to the inventory of known caves in a little-explored region
By Claire Gougeon
With photography by Douglas Noblet
November 14, 2019

It all started with a simple question: is there unexplored karst in the West Kootenay region of British Columbia where we might find new caves?

In 2017, aspiring caver, pilot and photographer Douglas Noblet flew cavers Robin Beech and Eva Cameron in a small plane through mountain ranges in the West Kootenay, hoping to identify karst areas. The flight was a success; they spotted about 25 good leads. One of the most promising was within walking distance of an accessible logging road — if you consider 1,600 metres of elevation gain over six kilometres while carrying a 25 kilogram pack a “walk.”

Those who know Eva, Robin, and Doug know that they’re fully capable of such folly. The following summer, they hiked to the ridge to check out one of the holes they had spotted from the air. The terrain was karst, the soluble rock that cavers seek, pockmarked with perhaps 40 or so pits, sinkholes and openings, a few of which turned out to be cave entrances. 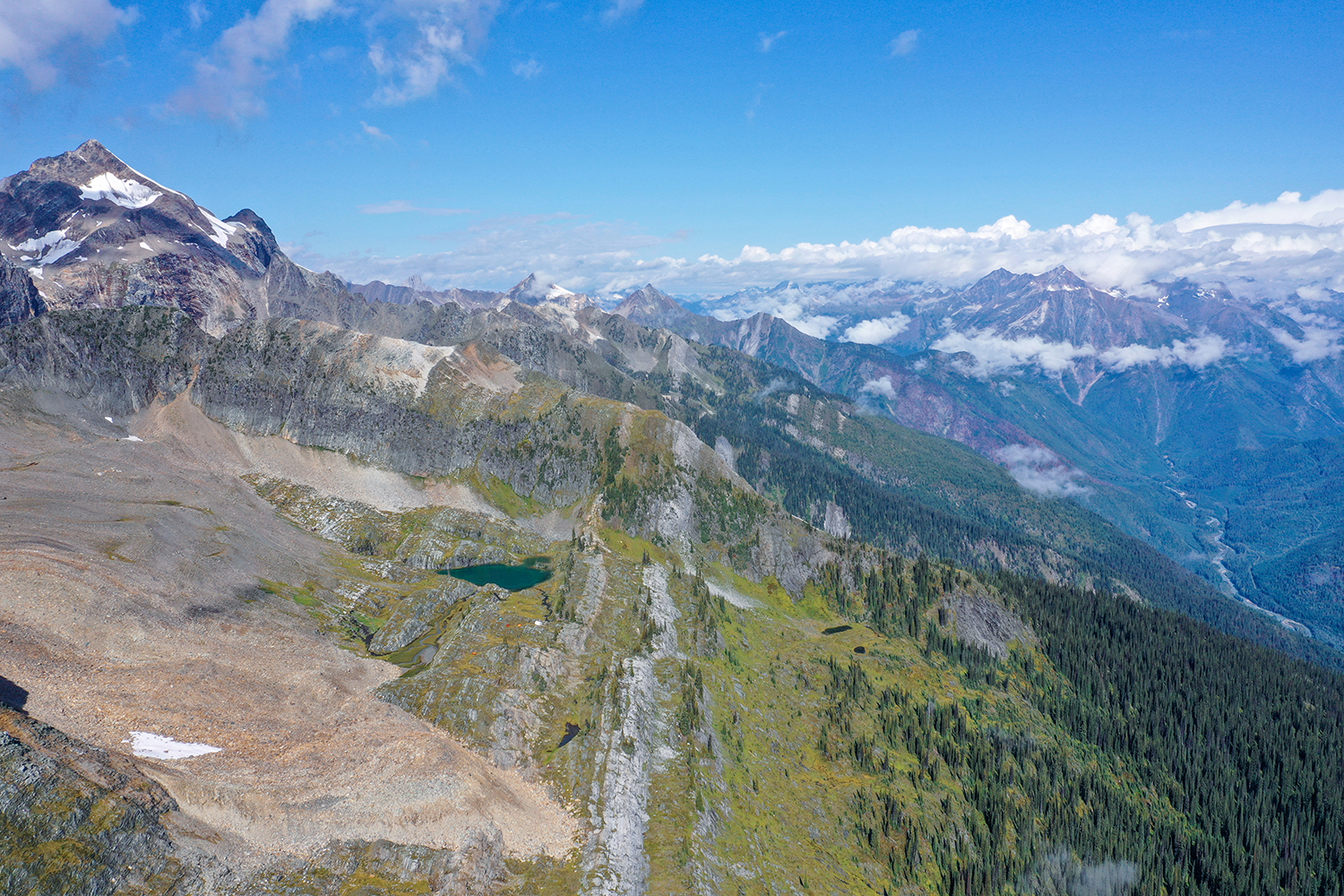 An aerial view of the Jawdrop karst landscape looking south.

This is typical of cave exploration; the majority of potential cave entrances are passable only by water, not by humans. However, all it takes is one. If a caver is able to find a way past the silt, stones, sand, and earth that fill in small openings, the rock has a tendency to become less fractured, carved only by the rushing water that funnels together in underground rivers, creating wider and larger passageways in the bedrock. Once you’re “in,” the cave can really go.

Armed with what they had been able to carry on their backs, the team pushed as far as they could, but their 10-metre rope was not long enough for any of the vertical entrances.

The explorers hiked back down with a new question: is there a large cave system in the West Kootenay? The most promising entrance they’d discovered suggested there might be. They called it “Jawdrop” because of their reaction as their eyes followed a waterfall down into a seemingly bottomless pit. 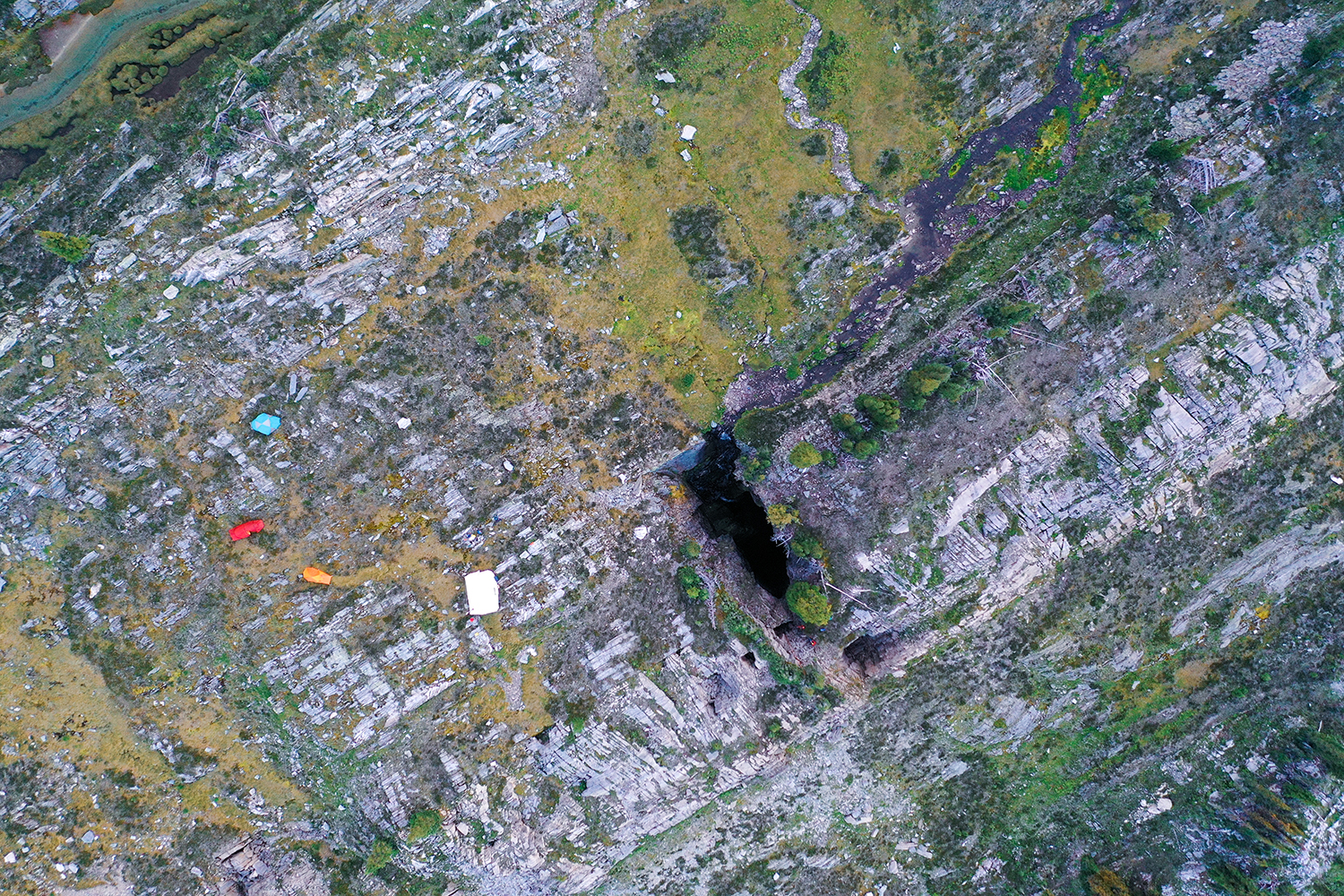 Looking down at the entrance to Jawdrop.

The deepest known caves in Canada and the U.S. are located in the East Kootenay. The deepest cave in the West Kootenay is Sawtooth, bottoming out at a depth of 146 metres — less than a quarter of the 670-metre Canadian depth record held by the Bisaro Anima cave near Fernie, B.C. That said, the seemingly dramatic difference between these neighbouring regions is likely a consequence of unequal efforts to explore and map them rather than actual geological limits.

To explore Jawdrop would require rigging tools and gear, large quantities of rope, and enough food and camping equipment for an extended stay — an impossible load to carry on foot. The team needed a helicopter, and that would require financial support.

My friends had kept me updated on their efforts, so when I moved from the Fernie area to the West Kootenay, I joined their team. We reached out to local and national sources, several of which generously supported the endeavour, among them The Royal Canadian Geographical Society.

In August 2019, I met Eva, Doug and Robin at the logging road where one year earlier their slog up the mountain ridge had begun. We cleared branches from the landing area and before long heard the sound of a thumping rotor as the helicopter came into sight. The pilot helped us load our gear, and in a matter of minutes we found ourselves on a silent plateau above and away from any sign of civilization.

As soon as we had established our camp, we turned our attention to Jawdrop’s yawning mouth.  Despite the fact that we had already been on the go for 10 hours, Robin could not wait to drop into that pit. Just before dark, he grabbed rigging gear and rope and got to work. Over the next two days, he descended 100 metres, establishing more than a dozen rigging points, until he finally set foot on the rocky floor of an enormous chamber, 10 metres wide with a ceiling 25 metres high. 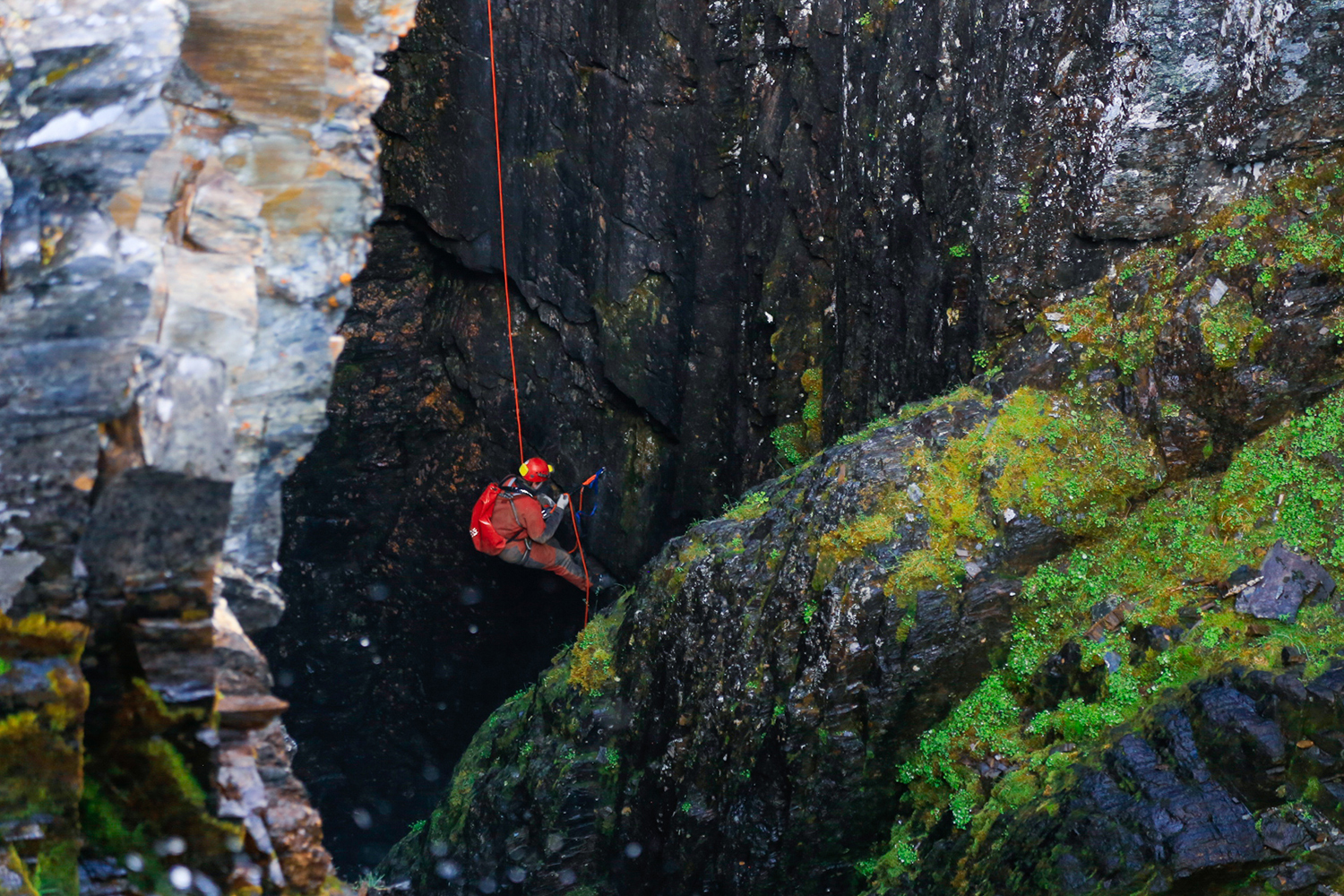 The following day, the whole team descended to the bottom of the cave and watched as the waterfall that poured into the chamber trickled between the stones at our feet and disappeared into the ground, taking a route that we could not follow. Sadly, the promising Jawdrop cave ended at the huge chamber.

During our week-long expedition, we rigged, surveyed, and documented several other new caves. While Jawdrop contains the largest chamber, other caves in the area had unique features that make them significant discoveries to add to the inventory of West Kootenay karst features. We’re very pleased with what we’ve accomplished, despite not being able to break through into the main system.

In my mind, the cave system question is answered. The karst plateau that we camped on was a vast water catchment area of one square kilometre. The waterfall pouring into Jawdrop and other pits suggests an impressive stream cave system is likely; when we snapped the team photo below in the pit, I could hear water running through the cracks in the wall just behind us. I believe that there is indeed a massive cave system in the West Kootenay. We just couldn’t get to it. 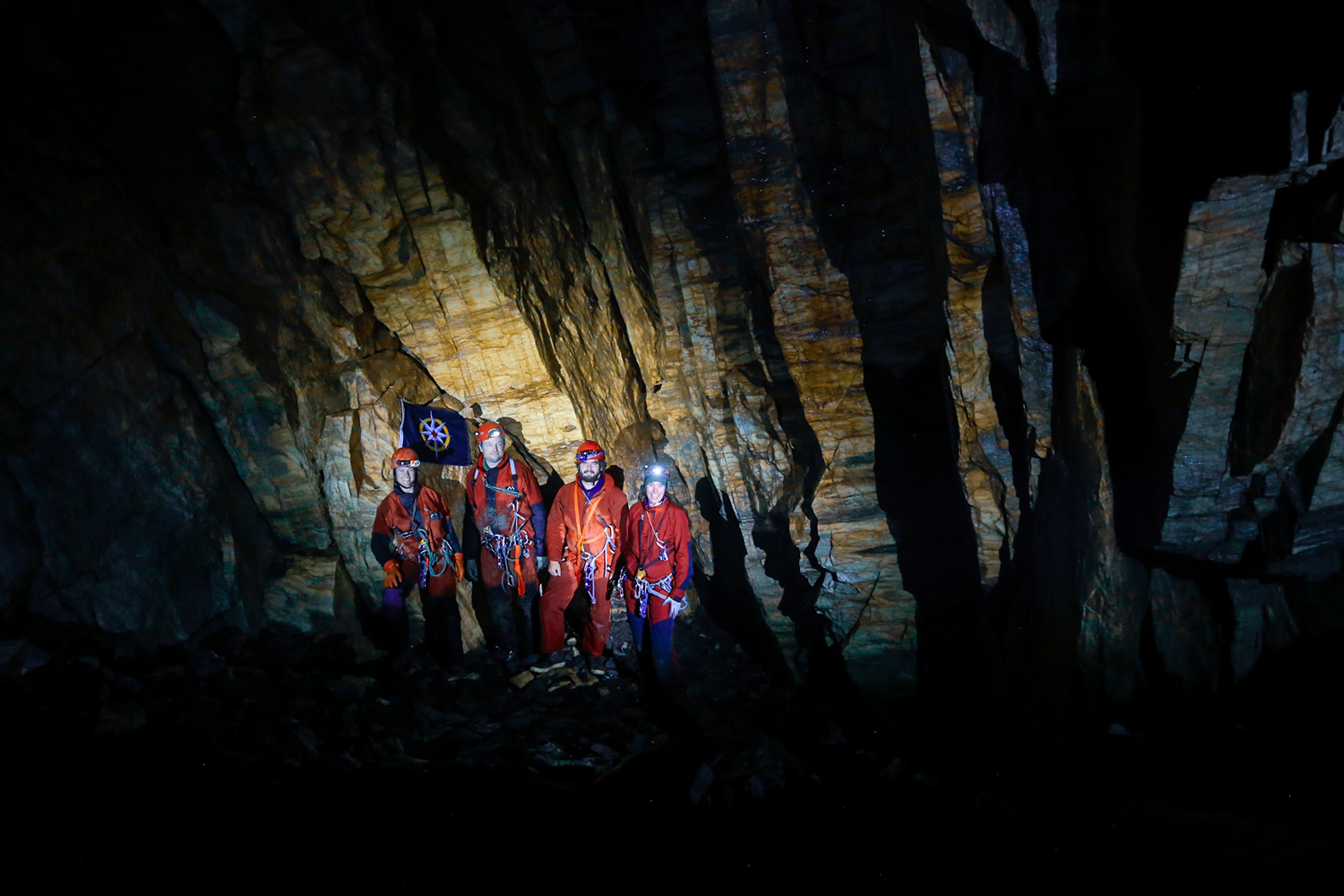 The expedition team with the flag of The Royal Canadian Geographical Society inside Jawdrop cave.