A team of Canadian researchers has found evidence that microplastics and microfibers have infiltrated Arctic ecosystems, but the source of these tiny fragments is still unclear
By Samantha Pope
June 30, 2020

Every time you wash your fleece sweater, it sheds thousands of tiny fibers. Ultimately, these fibers end up in our waterways and, eventually, the ocean, where they are carried long distances by wind and waves.

In fact, those tiny fibers from your sweater may have been in one of the many water samples Chelsea Rochman and her team collected in the Eastern Canadian Arctic in the summer of 2017.

The team sought to study the presence of microplastics in the Canadian Arctic across 36 sampling sites, from southern Hudson’s Bay to the tip of Ellesmere Island. It was the first extensive, large-scale study to analyze sediment, water and zooplankton samples across the Eastern Canadian Arctic.

But it wasn’t the presence of microplastics that alarmed Rochman, an ecologist at the University of Toronto; in fact, she said she was expecting to find them. After all, countless studies have previously found microplastics in Arctic water, snow, ice and sediment. As Arctic sea ice melts, it can even become a source of microplastics as it unleashes tiny pieces of plastic that were once frozen in the ice.

Instead, what troubled Rochman was that she found “absolutely no correlation” between the concentrations in the samples and the populations of local communities that were upstream of each sampling site, suggesting the source of the microplastics is long-range transport.

“It shows that our footprint has really reached everywhere,” Rochman says. “There was certainly a time when people thought the Arctic was untouched wilderness, but that just isn’t the case, unfortunately.” 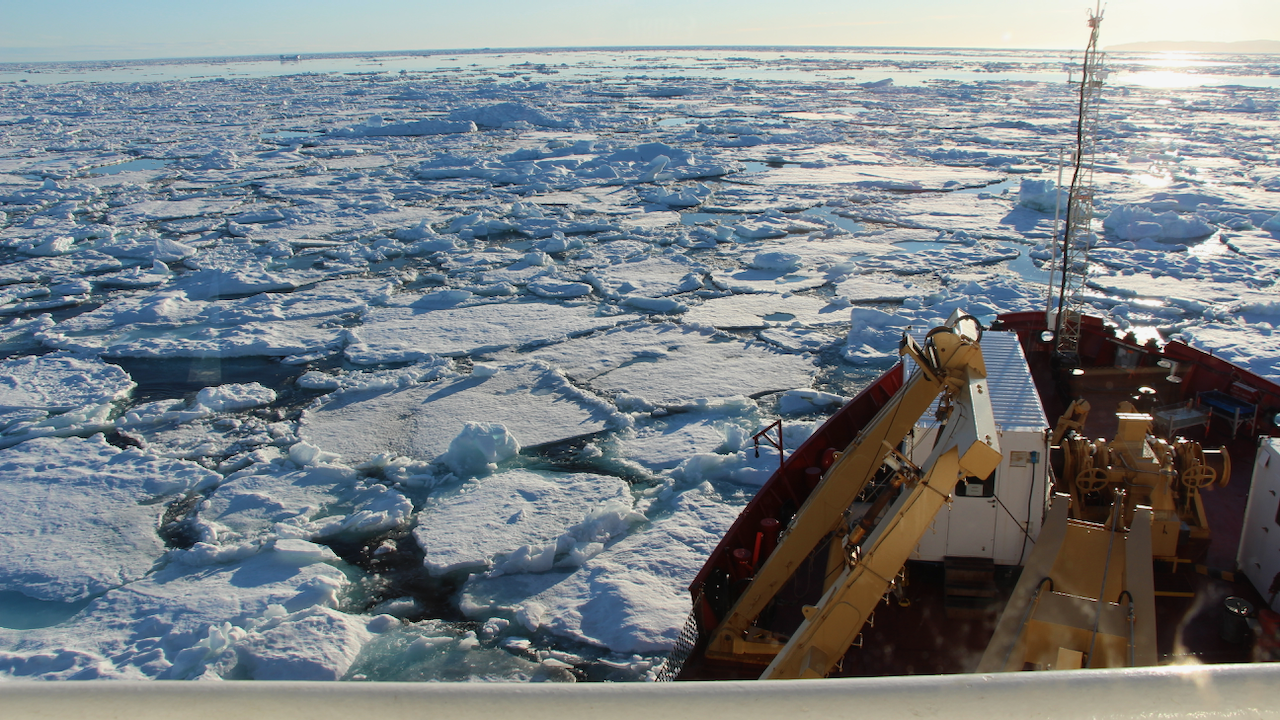 Rochman and her colleagues set sail on the Canadian research icebreaker the CCGS Amundsen in the summer of 2017. (Photo: Chelsea Rochman)

It’s still unclear where these microplastics originated, says Liisa Jantunen, a co-author of the study and an environmental chemist with Environment and Climate Change Canada. It is also unclear whether water, ice, or the atmosphere are the main transport pathways of these plastics.

“To address the sources of these microplastics and fibers, a lot more work needs to be done,” she says. “If we can identify where these plastics are coming from, it can help with mitigation.”

Most of the fragments found in the samples were microfibers rather than microplastics, meaning they are most likely coming from textiles. Many of the fibers collected were blue, suggesting they could be from jeans.

If researchers are able to conclude that a majority of microplastics and fibers are coming from cruise ships, it could lead to stricter regulation of the amount of garbage these ships dump into the ocean. But, if the fibers are coming from household washing machines thousands of kilometres away, Jantunen says it will be harder to mitigate the problem.

One finding that especially concerned the researchers was that microfibers were detected inside zooplankton samples. Zooplankton are microscopic organisms that form the basis for marine food webs.

Microplastics infiltrating food webs and ecosystems means we end up ingesting these tiny plastics without even realizing it, says Peter Ross, vice-president of research at Ocean Wise, who has done extensive research on microplastics.

“We eat seafood, and as a consequence, are eating microplastics that have been ingested by fish and other species in the wild,” he says. “If left unchecked, we will continue to eat more and more microplastics.”

When plastics are present at the lowest levels of the food chain, effectively every species in the food chain becomes contaminated through the process of biomagnification. What’s uncertain are the long-term effects on various species of ingesting microplastics.

The average person consumes five grams of microplastics — about the equivalent of a credit card — each week, according to a 2019 report by the World Wildlife Fund. But, researchers don’t yet fully understand how ingesting these microplastics affects human health in the short-term or long-term.

What is understood is that harmful chemicals are often added to plastics in the manufacturing process. For example, colouring agents often contain toxic ingredients not meant to be consumed by humans.

Another example are phthalates, which are endocrine-disrupting chemicals that make plastics more flexible. Exposure to this chemical has been linked to reduced testosterone levels in male fetuses.

The effects of microplastic ingestion in animals are slightly better understood. Studies have found that tiny plastic particles can block the digestive tract and reduce the animal’s urge to eat by tricking them into thinking that their stomach is full. In turn, this reduces growth, hinders reproductive behaviour, and can lead to starvation and death.

All of this has the potential to pose major problems for northern communities, which struggle with food insecurity and rely on seafood as a dietary staple.

“The ocean is 25 times more important to the Inuit than it is to me because of their heavy reliance on aquatic foods,” says Ross. “I think we should be taking note of this issue because the Arctic is their backyard.”

The Arctic isn’t necessarily more contaminated than other places on Earth, Ross clarifies, explaining that microplastics are also present in waterways close to urban centres. However, the fact that microplastics are travelling to these remote regions demonstrates how activities down south can affect the environment up north, and consequently, Canada’s northern Indigenous communities.

Rochman and Jantunen say there are things individuals can do to prevent microplastics from entering our waterways, such as properly recycling plastic products where facilities exist, reducing our overall plastic consumption and avoiding ‘fast fashion.’

But, governments can also play a key role in mitigation through measures such as banning single-use plastics and improving waste management.

“For me, it’s not about blaming one sector,” Ross says. “We need to continue to pursue a forward-looking agenda that solves the problem, improves the quality of products being sold, and enhances the economic strengths of entrepreneurs that are coming up with more sustainable ideas. This will continue to bring us together to tackle this most pressing global conservation concern.”

Related: Microplastics are turning up in Arctic ice