Jack Miner – also known as Wild Goose Jack – founded the Jack Miner Migratory Bird Foundation located in Kingsville, Ont. in 1904. He became known as one of the world’s greatest naturalists and the father of the conservation movement in North America.

National Wildlife Week Act, reintroduced in the House of Commons April in 1947, honours Miner’s conservation efforts and encourages public interest in preserving the environment and wildlife from April 4 to April 10, which is Miner’s birthday.

“The beautiful thing about him, he was a friend to everybody and that’s what made him a hero,” says Tim Dobson, the current director at the sanctuary. “He didn’t care about how much money you had, what car you drove, the size of the house you lived in… and that was the magnetic attraction that brought people here. That’s what made Jack Miners the next big tourist trap next to Niagara Falls – because Jack Miner wasn’t going over the falls, he was creating the falls.”

Miner created a space that offers so much to see and do, what could a day at Jack Miner look like for you?

You are first greeted by Miner’s home where on either side sit two confined spaces that are typically inhabited by peacocks or eagles that need protecting.

We entered through the back door and walked past the kitchen to the dining room where he hosted dinners for special guests and officials that visited. Continuing to the large glass window that overlooks the feeding pond is a room filled with collections of various bird species and is considered one of his entertainment rooms.

From articles of his wardrobe and furniture, to pictures of him feeding the birds, you will see rooms filled with the many things that reflect Miner’s life journey and legacy.

Dobson says birds that were shot by a hunter would sometimes come to Miner’s backdoor to die. “They loved Jack Miners, it was their sanctuary,” he says.

The Sanctuary is a place that is home to many birds during their migrating journeys. Some of the geese that remain have angel wings – a condition that prevents them from flying – which happens when people feed them bread.

When you approach the feeding pond next to the museum there’s a bin filled with corn, wheat and barley. Fill a cup at this station and enjoy feeding the geese that are playing in the water or at the side of the pond. 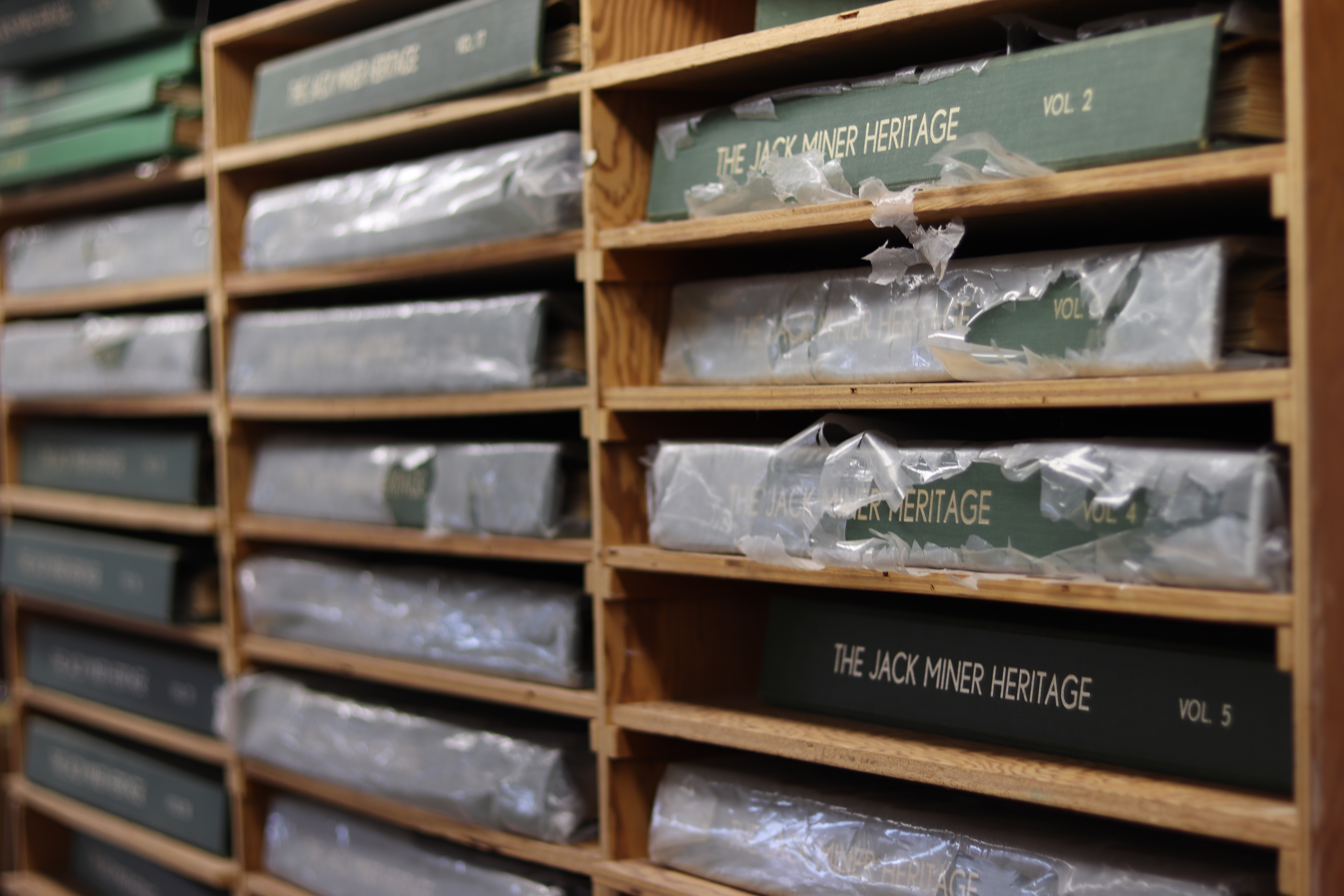 At the museum you will see photographs, documents, books and so much more. When you turn the corner at the back you will find a collection of 72 bands from 1915 to 1978 – one of which was a band from Miner’s grandson’s pet goose and two from the geese banded when 33 United Nations Delegates visited in 1956.

The sanctuary is one of several central flyways that uses this scientific initiative to track migratory bird patterns.

Banding only happens if there are enough birds to capture in the netting station. Students from Jack Miner Public School help with this process under the guidance of Joe Vermeulen who has been the park director for more than 30 years. In a normal year they could band more than 1,000 birds but due to COVID they banded 300 to 400 waterfowl this year.

To the right of the homestead and clubhouse – the place where Miner and his special guests gathered for fires or a bite to eat – is the Ty Cobb baseball field. At the time, Miner believed that his children and young men should immerse themselves in sporting activities and the great outdoors, so he created this baseball field in the early 20s.

Ty Cobb – one of the most famous baseball players and one of Miner’s dearest friends – came to this field to play his favourite game. Cobb’s bat and baseball glove – along with photos of him and Miner cooking dinner at their hunt camp – lives in the homestead to this day.

To the back left of the field is Miner and his wife – Laona Wigle’s – memorial ground to honour their lives.

Just east down the road from the sanctuary are the Kennedy Woods. We were welcomed by large trunked trees branching over a few picnic tables before entering.

After following the first trail all the way through, we came to an open field and were given the option to travel left or right into the direction of our choice. To the left and straight to the back of the open land we approached a trail that led us through the blossoming buds on the trees and plants. We saw streams and a small bridge that crosses Mud Creek. Later throughout our adventure we had the chance to witness one of the beauties nature has to offer – a giant eagle’s nest.

During our tour of the six-kilometer-long trails, Dobson stopped to show us where aged metals were dropped many years ago and pointed out a rusty wheel merged with the growth of a tree. You’ll come across different benches and tables that are a perfect resting place to catch your breath or have a picnic. 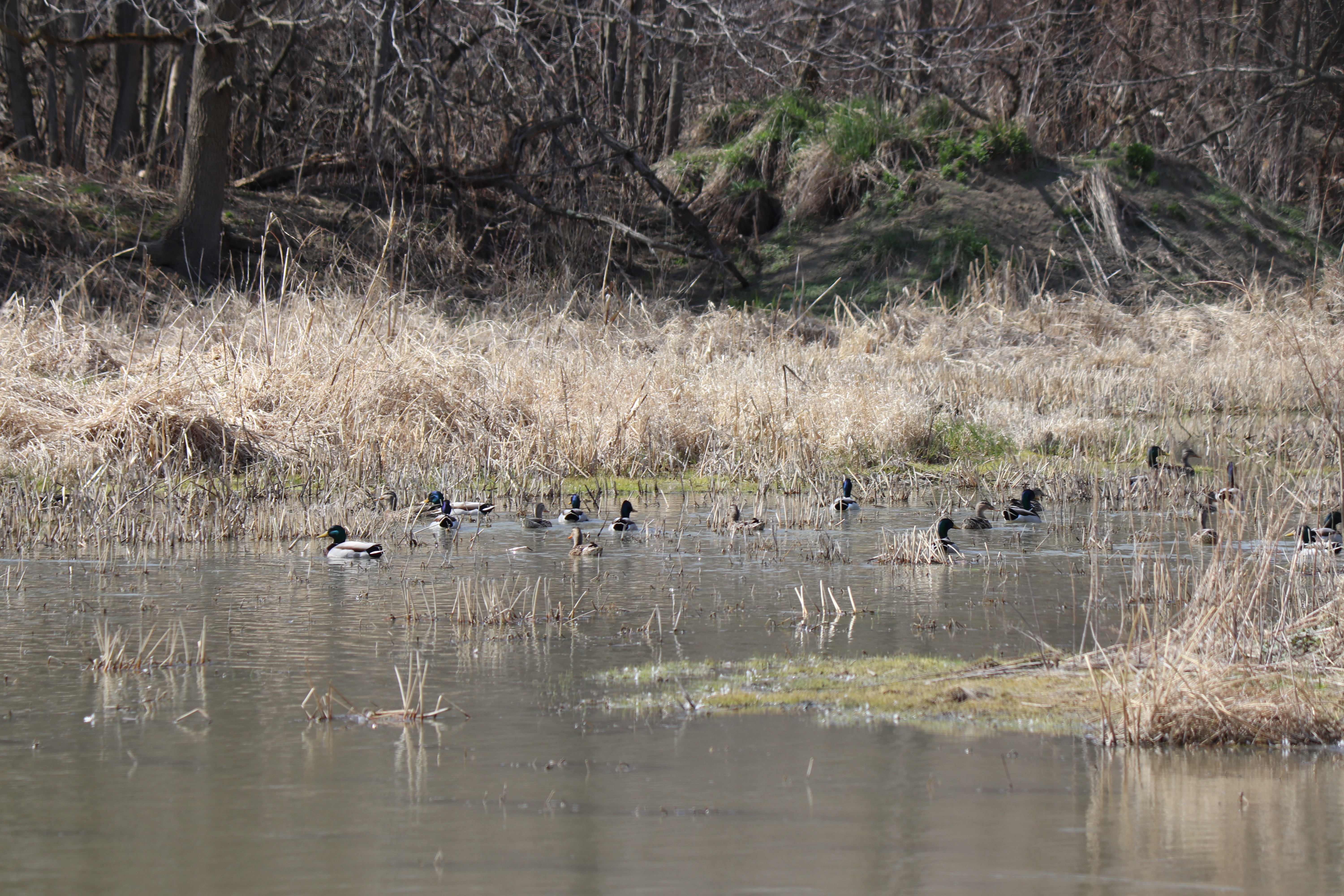 If you visit during migration season – prime time is from September to April 1 – you may have the chance to see birds take flight.

Busses would travel across Ontario and Michigan to come see what was happening at Jack Miner’s. Up until a few years ago, schools would plan field trips each year to show the kids this history and feed the birds. When the sanctuary first opened, admission fees were what kept it going. Today, visiting the land and signing up for a tour is free. Donation funds and volunteers are what keep the doors open to the public and help feed and rehabilitate the birds.

“Our vision down the road is to have a big museum – filled with photos, bands, Jack’s scrapbooks filled with writings,” Dobson says. “We may never get 1,000 cars down this road again to see the birds, but can we get 300, 400 to see a new type of museum – a wildlife cultural center.”

Dobson says he hopes people are able to experience, envision and appreciate all that Miner did for the rest of us.

“The ecosystem is fragile and use it or lose it,” Dobson says. “We’ve been given this great gift and opportunity. Dobson says we have to be wise stewards of the land so we can see the future for the kids.

Chris Lewis, MP of Essex Ont. says that Jack Miner was somebody that continued to serve on so many fronts. He says that Miner allowed others to see that possibility thinking is real – he brought hope and opportunity to the people.

“It’s not only enough to dream it [but you also] have to work it as well and therein lies [these] 450 acres that he single handedly brought to life,” Lewis says. “We’re going to make darn sure this Jack Miner’s legacy lives on because each of us lives and breath it, we just need something to get behind and leave this world a better place than we found it, just like Jack Miner did.”