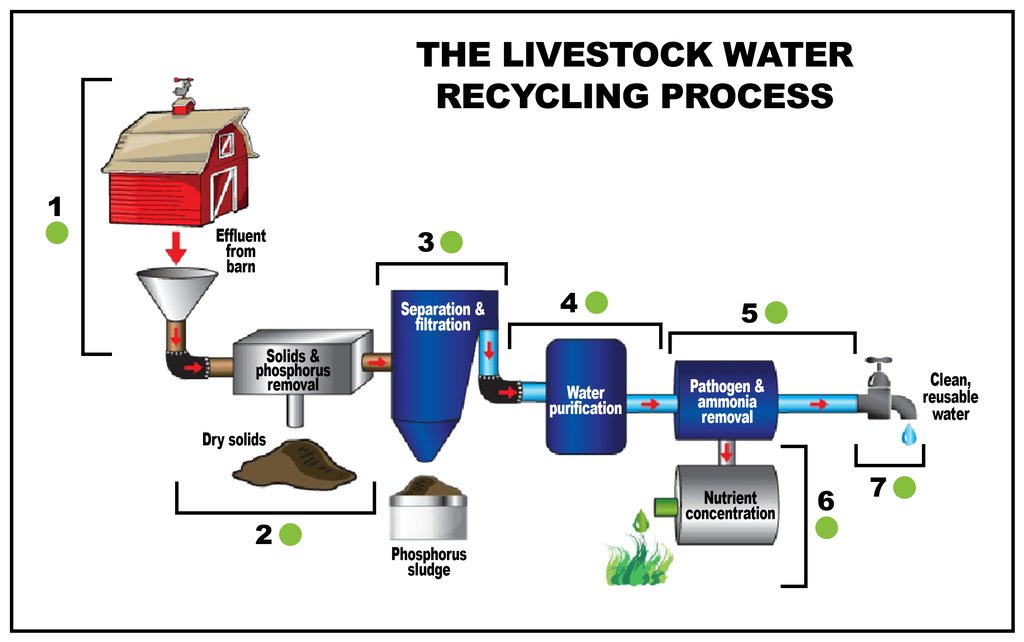 LWR’s patented process technology uses mechanical and chemical treatments for the removal of manure contaminants from the discharge waters of “concentrated animal feeding operations.” The system is focused on the reduction of solids, phosphorus, potassium, ammonia and nitrogen from livestock facility wastewater. As the wastewater flows through this process, solids are sequentially removed from the influent stream. The produced water is available for re-use in the barns, while important by-products are valuable fertilizers.

Using their patented waste treatment system, Ross Thurston and the rest of his Calgary-based Livestock Water Recycling team reduce manure into its valuable components — reusable nutrients (phosphorus), solid and liquid fertilizers, and water so clean you can drink it. What doesn’t come out of the process is a single ounce of waste. This year, The Royal Canadian Geographical Society is awarding Thurston the 3M Environmental Innovation Award for his system.

By the time Thurston turned to solving water treatment problems in the enormous dairy and hog livestock industries, he had more than 15 years experience designing and building systems that clean groundwater contaminated by hydrocarbons (such as petroleum) throughout North America and in South America.

“Livestock was a bit of a Holy Grail,” he says. “We had a certain skill set and were looking for new opportunities, new ways to grow and learn, and the market presented itself to us. One of the real problems we have in the world is water, and when we went looking, we found that agriculture accounts for 70 per cent of the world’s consumption.”

And considering that nearly 40 per cent of corn grown in North America becomes feed for livestock, the impact of more sustainable dairy and hog waste treatment is highly cyclical, Thurston explains. “It’s still estimated that world food output is going to have to double by about 2050. There’s always great pressure to produce more and more food, for us and for livestock, from the same area of land.”

When the United Nations first made that projection a few years ago, the study cited the urgent need for “innovative strategies” in farming. Thurston’s Livestock Water Recycling system (which takes up a space a bit smaller than 21 by 8 metres) benefits participating farmers, especially of large-scale operations, in a number of ways — nutrient and clean water recovery and cost efficiency among them — but it also helps farmers produce smaller amounts of more concentrated fertilizers, which are easier to store and transport and apply at optimal times and places throughout the year.

Despite their achievements — the system has gained traction and proven itself in areas such as the northeastern United States, where food production needs are much higher than in Canada — Thurston and his team are always seeking to streamline and innovate on their process. “And I’ve had the pleasure of working with a group of very committed individuals, who have overcome design hurdles, regulatory hurdles and design challenges, and continue to do so,” he says.