“Today, over 15 per cent of the Canadian population identify themselves as having Scottish roots, and our economic, academic and cultural ties are growing ever stronger,” said Nicola Sturgeon, First Minister of Scotland, in a video message to guests at The Royal Canadian Geographical Society’s annual College of Fellows Dinner in November 2017.

“That is reflected in the relationship between our two royal geographical societies … I know our countries will benefit from a greater exchange of knowledge and expertise in the future.”

Besides applauding the fresh memorandum of understanding between the RCGS and the Royal Scottish Geographical Society, Sturgeon congratulated RSGS CEO Mike Robinson for having been awarded the Canadian Bernier Medal. The honour recognized his work modernizing and reinvigorating the RSGS, as well as his role in the establishment of the Scottish Climate Change Act and broader influence on international climate policy. Robinson and RSGS Chair Roger Crofts were also inducted as RCGS Fellows. 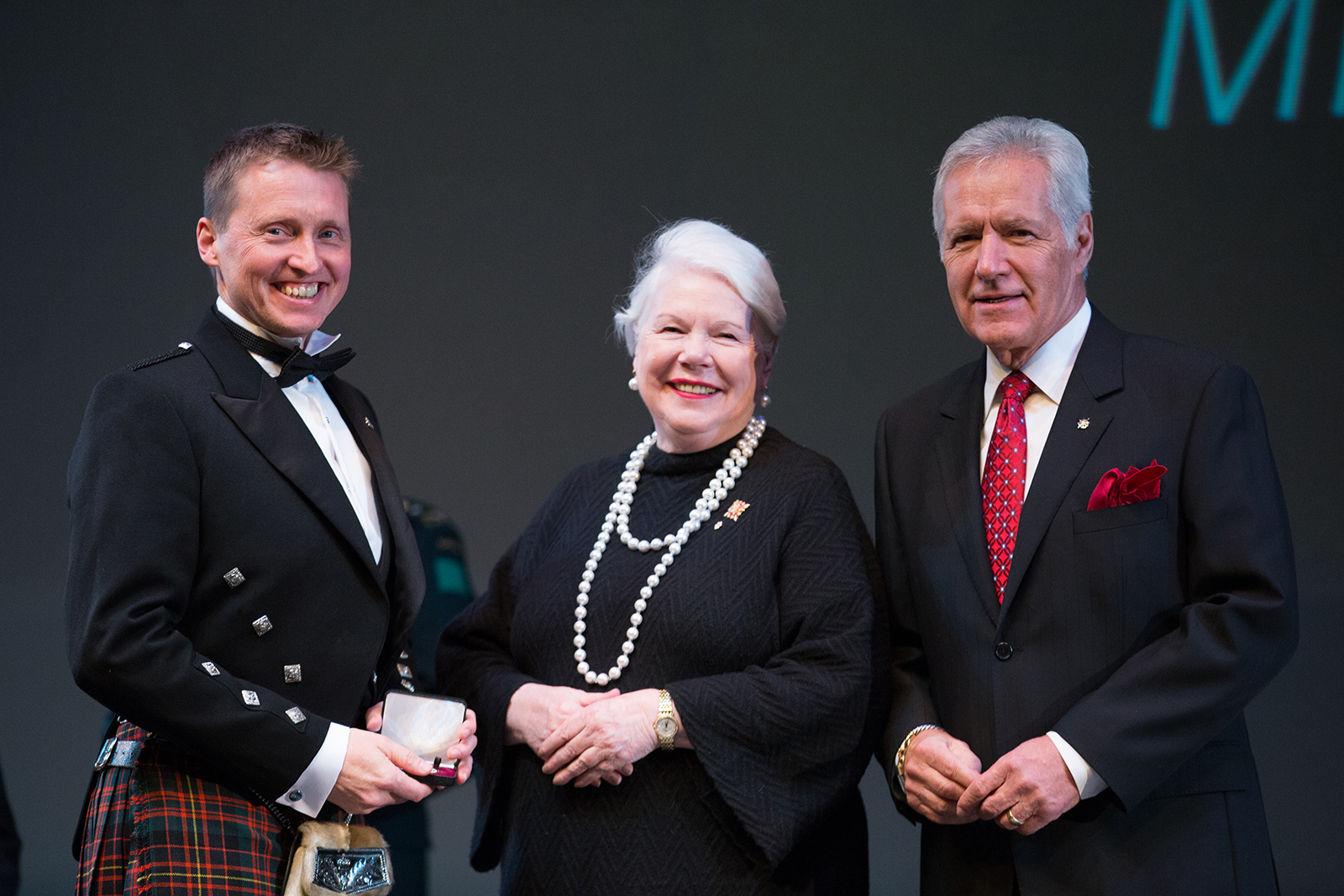 Mike Robinson with Elizabeth Dowdeswell, Lieutenant Governor of Ontario, and Alex Trebek, Honorary President of the RCGS, after the presentation of the Society’s Bernier Medal. (Photo: Ben Powless/Canadian Geographic)

Think of the MOU as a cross-Atlantic handshake between societies with rich histories and the common ground to back it up. Just a few decades older than its Canadian equivalent, the RSGS (founded in 1884) has a membership of around 2,500, and publishes an academic periodical and a quarterly magazine titled The Geographer. The most recent edition of the latter, themed “Canada at 150,” delves into everything from Indigenous Peoples to Arctic sovereignty to a consideration of “Old Scotia and Nova Scotia.”

“There are many similarities between the RSGS and RCGS,” said John Geiger, CEO of the Canadian organization. “They are venerable Royal societies of great pedigree in exploration and promotion of geographic learning. Both went through rocky periods of declining relevance, yet have emerged as powerful forces for the discipline.”

And both organizations, he noted, have new headquarters — the RSGS in Perth near the River Tay, the RCGS on Ottawa’s Sussex Drive, overlooking the Ottawa River — not to mention thriving education programs and enviable popular outreach: “We share many concerns around education and the need to better understand the impacts of climate change on our respective countries and the planet. I am delighted to be working closely with my RSGS counterpart, Mike Robinson, a global leader in this field.”

The future will no doubt see collaboration on innovative publications and programming. “I hope this [MOU] signals the beginning of a robust relationship between our two societies that we can utilize to tackle global environmental problems and promote our mutual interests,” said Robinson. “There are so many links between Scotland and Canada, and a great willingness to forge greater friendships still.” 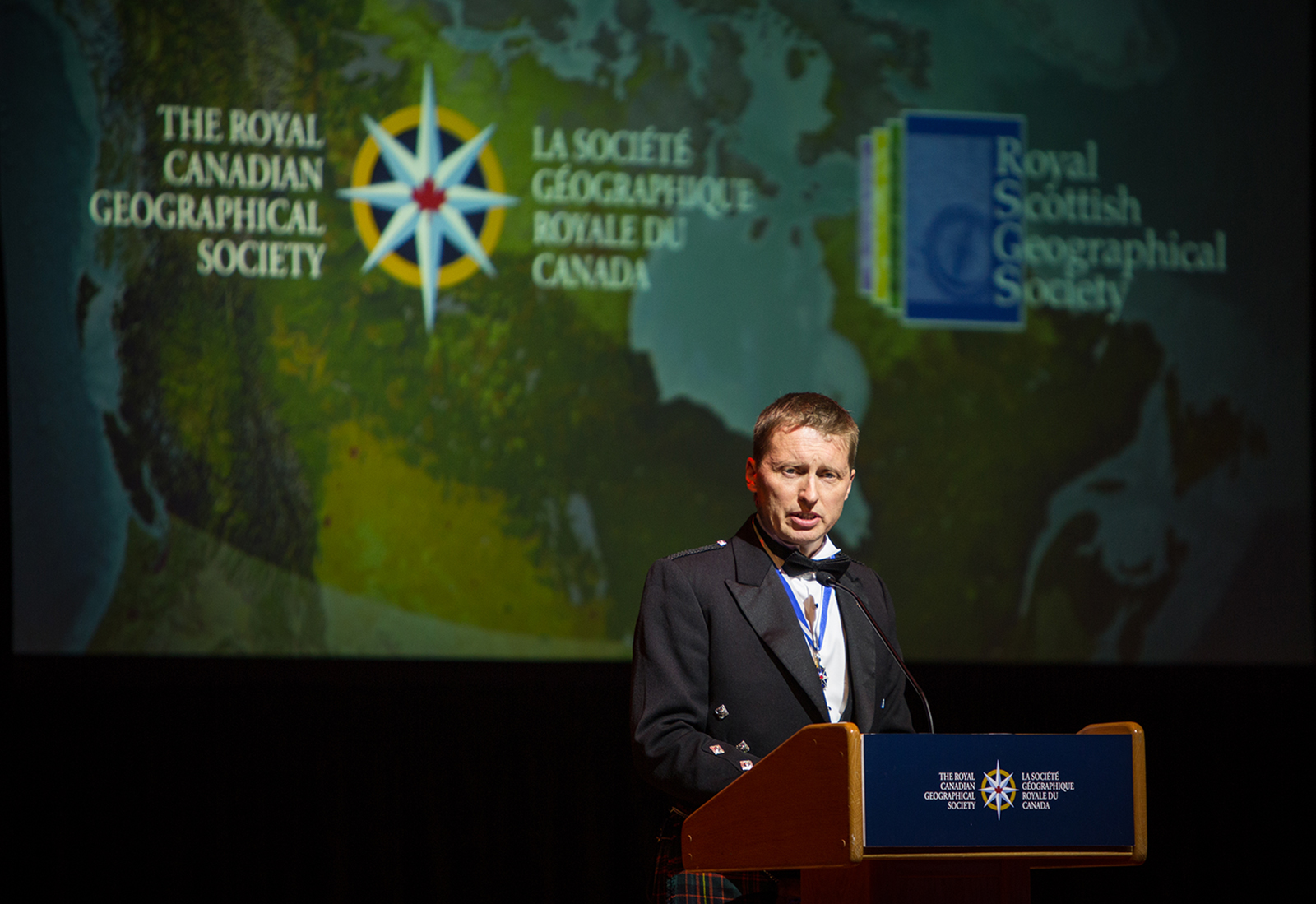 Mike Robinson speaks about some of the mutual interests of the geographical societies — education, exploration and climate change among them — on stage during the annual College of Fellows Dinner in November 2017. (Photo: Alex Tetreault/Canadian Geographic)