The rock legend, space scientist and author honoured for outstanding contributions to cultural and physical geography
By Can Geo Staff
July 28, 2019

He may have written “We Will Rock You,” “Fat Bottomed Girls” and several more of the 20th century’s greatest rock songs, but he can also explain the theoretical Heat Death of the universe.

Brian May, the legendary lead guitarist of Queen, an astrophysics PhD and author, received The Royal Canadian Geographical Society’s Lawrence J. Burpee Medal at a ceremony prior to the musician’s July 28, 2019, performance at Scotiabank Arena in Toronto, a stop on Queen’s North American The Rhapsody Tour.

The medal, awarded in recognition of outstanding contributions to the advancement of geography, was presented by RCGS CEO John Geiger, Lieutenant Governor of Ontario Elizabeth Dowdeswell (an RCGS Fellow) and RCGS vice-president Wendy Cecil.

May ranks among the all-time greatest rock guitarists and composers — think of the timeless solo from “Bohemian Rhapsody,” put on the 1974 album Sheer Heart Attack to hear his sublime shredding in “Brighton Rock,” or consider that he was one of the collaborators, with Queen front man Freddy Mercury and David Bowie, who wrote “Under Pressure.”

Geiger, who first saw Queen play at Toronto’s Exhibition Stadium in August 1980, made particular reference to “We Will Rock You,” calling it an “epic hymn to the greatest cultural force of our time.” But, he added, May was not recognized only for his enormous cultural influence — although this impact alone fits comfortably in the realm of cultural geography.

“We are also honouring Dr. May for his work as an astrophysicist,” says Geiger, “and more particularly as someone who has used his enormous celebrity to promote greater public understanding of a field that can appear to many as dense as a black hole, but which represents so much of the hope for humanity, as well as the potential for discovery that lies ahead.” 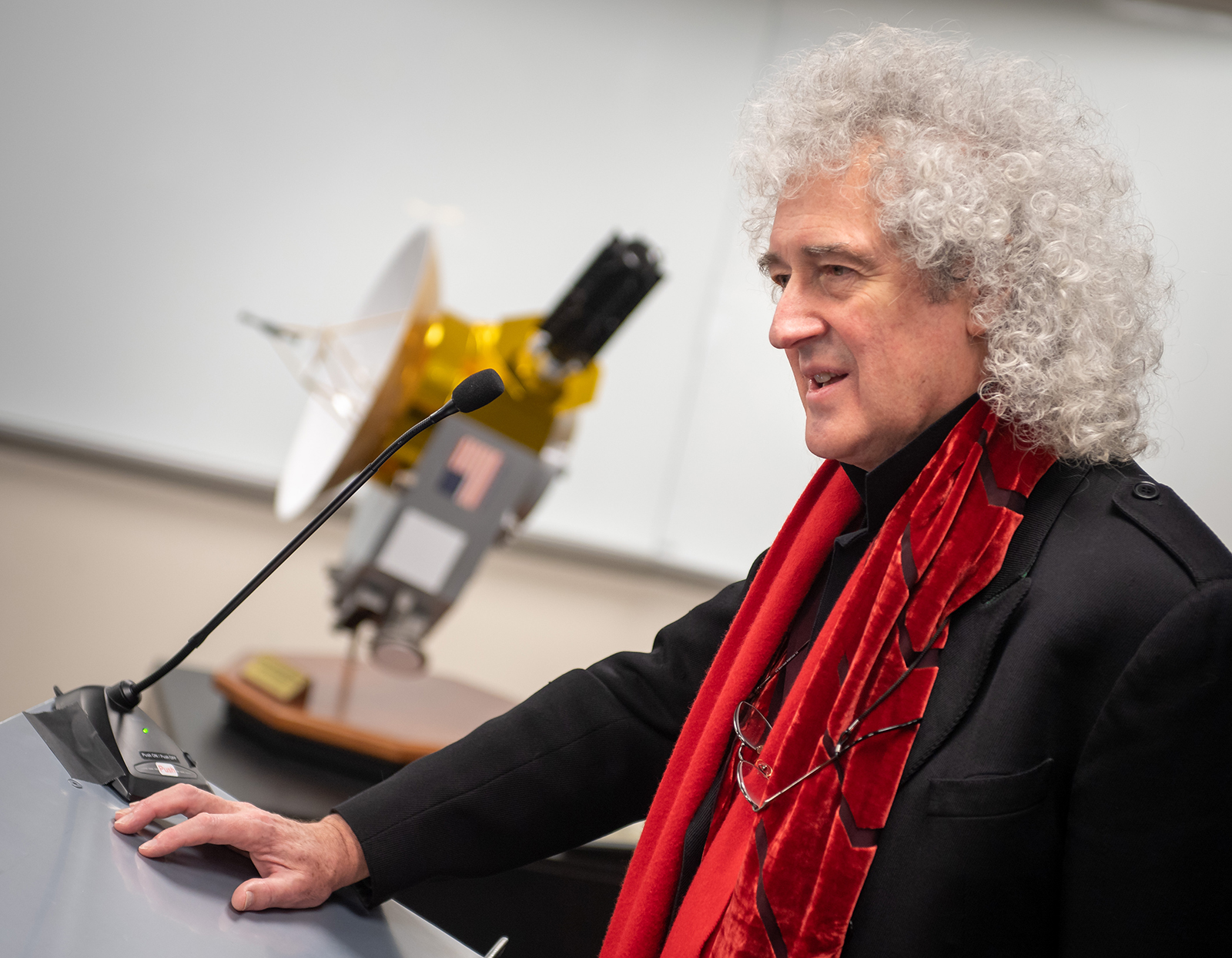 Space science found its way into May’s music (his song “’39,” from A Night at the Opera, for example, deals with Einstein’s special theory of relativity), but his most influential works in the field are books such as Bang!: The Complete History of the Universe, in which he and his co-authors explore 13.7 billion years of the cosmos, from the Big Bang to Heat Death (the latter a theory holding that the universe will expand until it reaches a state of thermal equilibrium, at which point it will no longer be able to sustain its processes). May was also instrumental in the establishment of June 30 as the UN-sanctioned Asteroid Day, which champions a deeper understanding of the role of asteroids in the formation of our universe and the value of asteroid exploration, and brings world experts together to devise innovate ways of protecting our planet. The threat is very real: just days ago, on July 25, 2019, for example, astronomers were shocked by the sudden discovery of an asteroid — large enough to wipe out a major city — only as it flew within 73,000 kilometres of Earth (about five times closer than the moon).

May was additionally recognized by the RCGS for his dedication to the revival of the 19th-century art of stereo photography, which produces images that, when viewed with a stereoscope, create a three-dimensional experience. As director of the London Stereoscopic Company, he has often featured images of place, and in an effort to make stereoscopic technology widely accessible, he invented and patented the OWL stereo focusing viewer, and in 2018 co-authored Mission Moon 3-D: A New Perspective on the Space Race.

I was deeply honoured to receive a beautiful medal from the Royal Canadian Geographical Society in Toronto. They very kindly made me a Fellow in recognition of the part I’ve played in making Science more accessible, and bringing Music and Science closer together. My grateful thanks. I will add more details about this when I have a moment. And I believe that the Society will be publishing a short video showing the ceremony. Cheers - Bri

His love of stereoscopy truly dovetailed with his expertise in astrophysics during his time as a science team collaborator on NASA’s ongoing New Horizons mission. In early 2019, he worked on images from the New Horizons spaceprobe to create the first 3D stereoanaglyph of “Ultima Thule” — officially (486958) 2014 MU69, a trans-Neptunian object in the Kuiper belt and the farthest object in the solar system ever visited by a spacecraft.

Watch: Brian May on what this honour means to him