From plastic trash to treasured art: Five artists invite us to rethink our relationship with plastic | Canadian Geographic

From plastic trash to treasured art: Five artists invite us to rethink our relationship with plastic

Five new works commissioned by Canadian Geographic offer eye-catching and compelling commentary on the impact of plastic on our planet
June 29, 2020

It was a powerful statement: for much of 2019, as visitors left Ripley’s Aquarium of Canada in Toronto, they were confronted with a silver canoe emerging from a tidal wave of plastic water bottles. What to make of this iconic Canadian symbol of water and wilderness engulfed in the seemingly ubiquitous empty bottles, a work titled Over Our Heads?

Questioning our dependence on plastic and the waste it’s creating is a principal motive behind the 10,000 Changes program from Canadian Geographic, together with Environment and Climate Change Canada and the Recycling Council of Ontario. As part of the initiative, Canadian Geographic wanted to inspire reflection on plastic similar to that prompted by the Ripley’s exhibit. So, we commissioned five Canadian artists to create works from plastic waste and share the rationale behind their art to provoke further thought on the issue.
Included among them is the very artist of the Ripley’s piece, Rebecca Jane Houston, along with Pete Clarkson, Katharine Harvey, Kerry Hodgson and Hilde Lambrechts. Some, like Houston, are already known for plastic waste art, while others mixed plastic into their existing mediums. All present pieces here that will inspire us to rethink plastic. 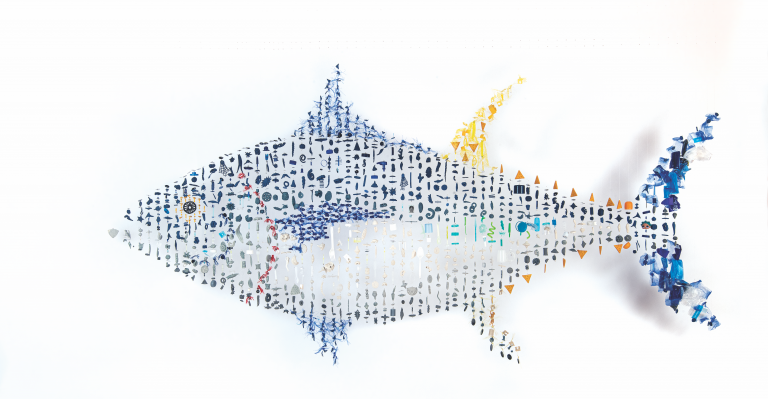 My work focuses on the environmental and social issues of our time. Blue Fin Tuna is a statement about the depletion of marine food sources and the plastic contamination in our food and oceans. The installation comprises hundreds of ceramic plankton sculptures and plastic garbage to form a two-dimensional blue fin tuna, true to size and colour.
Blue fin tuna are overfished globally, which I acknowledged by hanging the individual components from plastic fishing wire. And I included sculptures of both phytoplankton and zooplankton because of their importance to the aquatic food chain. As nutrients, they eventually become a part of larger fish species, exemplified by the tuna. The small sculptures are predominantly hand-built in porcelain and loosely based on plankton morphology. They are stained with underglazes, glazed and/or painted with acrylic, yet another plastic material.
The plastic garbage used in the artwork was collected from the North Sea beach in Belgium during a vacation, from a hospital lab, from the street and from several households for the duration of one year. In that sense, the work is a testament to the types of plastic used every day in 2019, including lids and cups, rope, acrylic yarn, cutlery, buttons, beads, toys, straws, clips, fasteners, a dental floss pick, a toothbrush, expired identification cards, hotel keys, tubes, a loofah and a range of packaging materials. Once in the water, these objects break down into micro- and nano-plastics, which move through the food chain to end up on our plates — we truly are what we eat.

Hilde Lambrechts is a largely self-taught artist with a PhD in biology. In 2012, she was a finalist for the Ottawa Arts Council’s RBC emerging artist award. Her works have appeared in exhibits and are held in private collections around the world. Born in Belgium, she became a Canadian citizen in 2015. 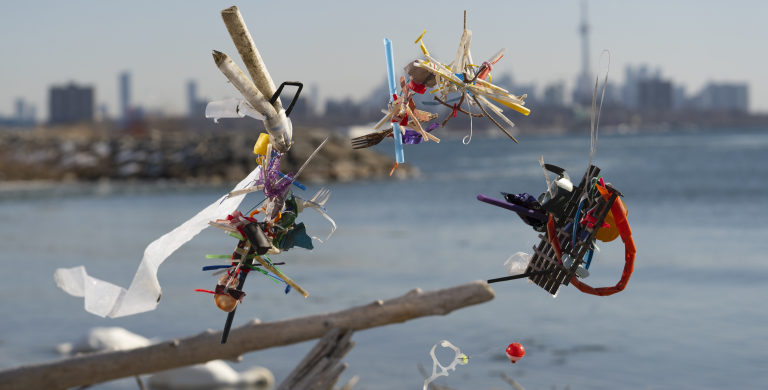 These sculptures are made from plastic gathered from Toronto’s Humber Bay shore, just east of the mouth of the Humber River. Woven from straws, water bottle lids, tampon applicators, miscellaneous strapping and bits of toys, they mimic what might happen in nature as creatures gather and weave whatever they find into something useful.
They are strange, semi-intentional emanations. They twist and nest. Collecting them felt like a dark harvest, like picking berries growing low on the shore with the sound of the waves lapping, ducks launching and landing, trucks humming nearby. The combination of peace and ugliness, whimsical colour and grossness, bright promise and overwhelming despair has permeated the making of these little things.
When I’m by the water, I’m reminded that, despite the pollution, being in nature is its own reward. I won’t find a pristine beach anywhere, but I can still go to the water and be renewed. It’s a place of tension where I can breathe in the fresh open sky and let my eyes be drawn out to the distant horizon, but also a ground zero for an encounter with the plastic crisis — a reality check. The plastics can never be removed; we can’t take them back. But we have to keep trying to hope, to push for change, to play and to love the life of the lake.

Rebecca Houston is a settler sculptor, art teacher and community artist inspired by feminist physicist Karen Barad and political theorist Jane Bennett. Her work explores and celebrates the inter- and intra-action of human and non-human bodies. Houston’s works have been shown at the Art Gallery of Ontario and the Ripley’s Aquarium of Canada in Toronto, among other venues. 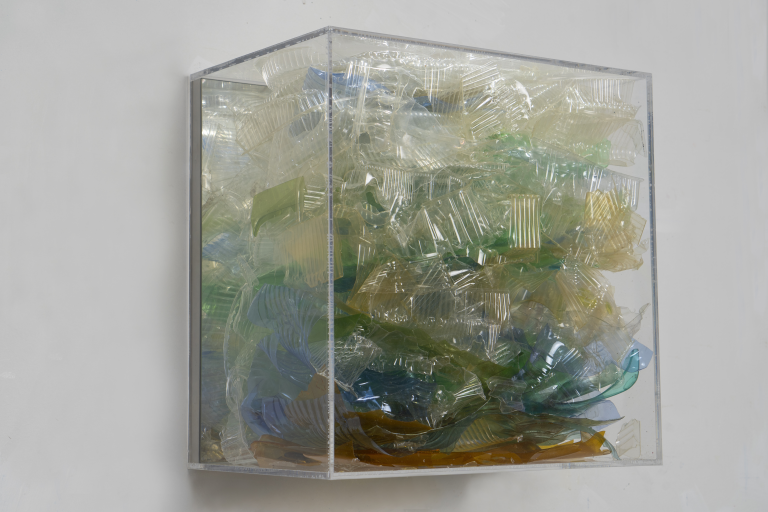 I have always been captivated by the reflectiveness and translucency of water — how it is both inviting and unknowable. Light has a similar kind of mystery to it, being both invisible and visible. There is magic in these natural elements, where one senses the universe in an associative rather than a literal way.
The same duality appears in more than 20 installations I have made since 2001; giant wall curtains and chandeliers made of discarded plastic containers, which I have collected and reused over the years. Corporate clients such as Brookfield Properties and Cadillac Fairview have commissioned me to create these large-scale works for their building lobbies. The installations offer a way to educate tenants about recycling. Similarly, the Monterey Bay Aquarium in California installed a piece I created to show visitors how plastic pollution destroys marine life.
My assemblages are alluring from a distance, designed to simulate the pulsating energy of falling water or the luminous qualities of crystal. At the same time, the transparent detritus reads close-up as an environmental message on consumer excess. It is a strange disconnect, to be enticed by a beautiful object only to acknowledge it is environmentally harmful. This piece, part of a larger series, speaks to the growing awareness about climate change. It also offers insight into the human psyche and our complicated relationship with the natural world.

Katharine Harvey has exhibited her paintings and installations across Canada, as well as in New York, Los Angeles, Washington, D.C., and Hamburg, Germany. Represented in Toronto by Nicholas Metivier Gallery, corporate clients such as BMO, the Canada Council Art Bank, Scotiabank, and Manulife have collected her work. 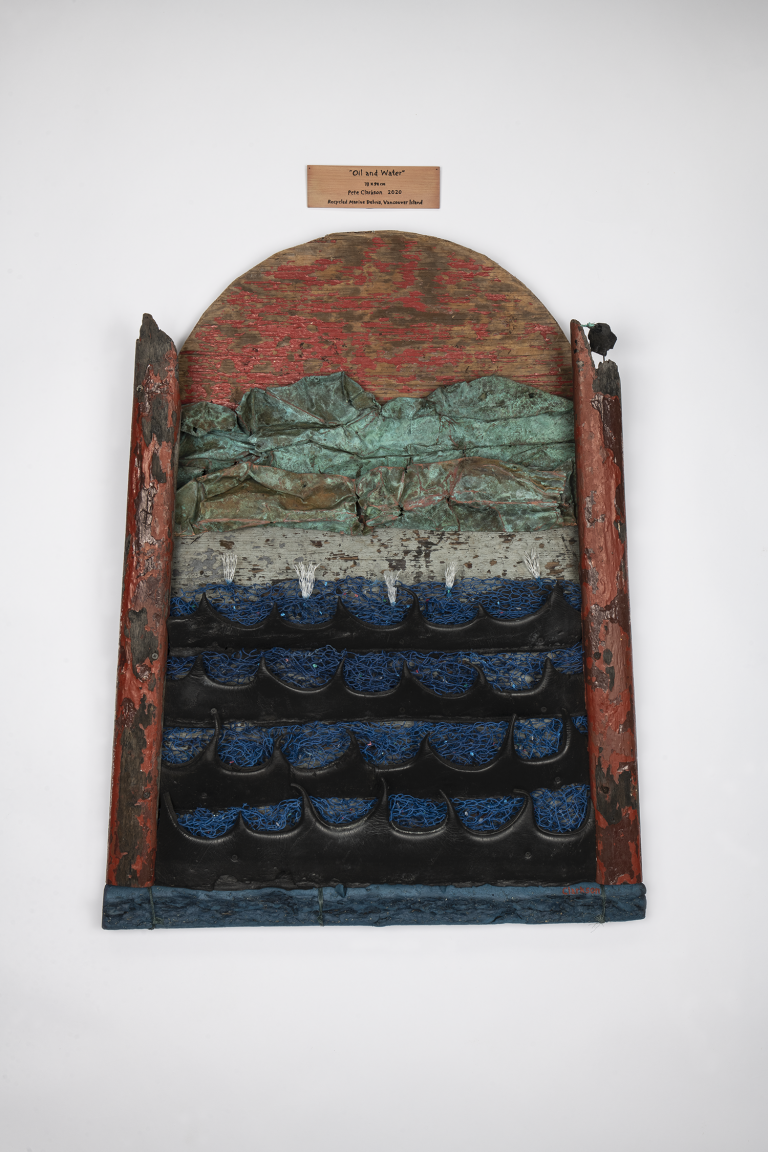 One of the first great truths we learn as kids is that oil and water don’t mix. The same holds true for plastic and water, perhaps not surprisingly since the former is mostly made of oil. Plastic has now found its way into oceans around the globe. It seems to me that ocean plastic pollution is essentially a massive, global oil spill. Though not as immediately destructive as a liquid oil spill, the impacts are real, and they’re pervasive. Some plastic sinks, some of it floats, but it never goes away. Meanwhile, winds and currents disperse it around the world.
This artwork is entirely fashioned from ocean plastic and other marine debris removed from the shores of Vancouver Island. My initial idea was inspired by the black, wave-like sandal “cutouts” I found underneath some drift logs on an island near Tofino. The black “waves” immediately reminded me of an oil spill. Made of closed-cell foam, a crude oil product, these cutouts are the manufacturing leftovers from flip-flops produced in Southeast Asia. They are absurdly common (I have personally found more than 100), come in a variety of colours and stay intact and afloat for decades.
All of the objects used in this artwork are, for the most part, presented as found. I want the viewer to discover these objects as I found them, with their worn edges, weathered changes and natural patina intact. Part of their attraction and inspiration is that each object has its own story, its own history and its own esthetic. As an artist, for me the magic is to bring these objects together, creating a synergy of the whole, yet still expressing their individual identities.
Of course, there’s always an exception. In this case, it’s the small raven. It was created by my friend and frequent collaborator, Tofino artist Dan Law. Fittingly, he carved it from a flip-flop with a distinctive lightning-bolt pattern embedded into the sole. These sandals exemplify ocean plastic pollution. They were spilled into the ocean from a container that was washed off a ship in the Pacific during the mid-1990s. Over the years, they have drifted far and wide. I found my first one in 1999 and have since collected them in Hawaii, Alaska, B.C. and even Japan. I still find them occasionally. They speak to the longevity of plastic and its presence throughout the world’s oceans. They also remind me that the old adage still holds — oil and water just don’t mix.

Pete Clarkson has been creating sculptures out of marine debris since he moved to Tofino to work at Pacific Rim National Park 18 years ago. He works with garbage he removes from the ocean or shorelines near his home. Clarkson’s works have been displayed at the Vancouver Aquarium and local galleries. 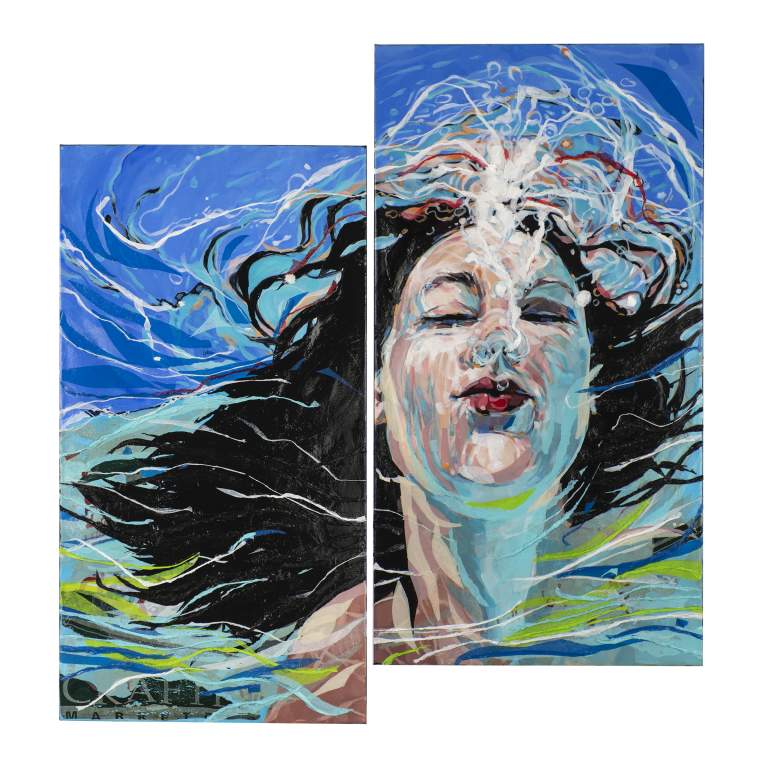 As the impacts of climate change move into the forefront of everyone’s minds, governments at all levels are slowly taking note, with some Canadian provinces implementing bans on most single-use plastic bags. While this piece is specific to the use of plastic shopping bags, it represents humankind emerging from their dependence on all single-use plastics.
The painting (on canvas about to be thrown out from a Costco) is done in acrylic, and plastic bags (a garbage bag and bags from several local grocery stores) were ironed on to create texture and movement in the lower part of the piece. This dissipates as the woman is about to reach the surface. As she is about to break through the water, she is also breaking away from the bags.

Halifax-based visual artist and designer Kerry Hodgson is a frequent contributor to Canadian Geographic. She creates engaging visual using traditional and digital media and has worked on campaigns for the federal government, the Ottawa Senators and York Region Transit, among others.
Explore ways you can help reduce your plastic use, learn more about plastic waste issues and much more at 10000changes.ca.