Photos: Life on board HMCS Yellowknife

Canada’s mission as part of Operation Caribbe? Choke off the flow of cocaine and other drugs across the eastern Pacific.
By Ian Coutts
With photography by Peter Power
March 18, 2020

“If you got bad news, you want to kick them blues …”

“Don’t forget this fact, you can’t get it back …”

In the galley, Yellowknife’s cooks started preparing breakfast at 0500 hours. Food is a morale booster on a ship, so it’s uniformly good and uniformly plentiful — eggs the way you want them, bacon or sausages, toast. Before too long, throughout the 55.3-metre Canadian maritime coastal defence vessel, there’ll be the clunk of heavy sea boots on metal gangways and a crowd will be gathering at the counter in the flat (as the navy calls corridors) outside the galley.

The music fades away, and two decks up on Yellowknife’s bridge, navy Lt. Anna Childerhose, the ship’s 24-year-old navigator and the officer of the watch, announces the ship’s location and the weather. She caps it off, as she does each morning, with an excruciating joke. (Example: “Did you hear about the shy pebble? It wanted to be a little boulder.”) Then, in a return to naval tradition, the shrill sound of a boatswain’s pipe rings out followed by the words, “Hands to breakfast.”

“Cocaine” isn’t exactly the song you’d expect to jolt you awake on a naval vessel. But they auction off the choice of wake-up song on Yellowknife as a charity fundraiser, and Clapton’s raucous ditty won this time. That aside, it is an excellent one-word answer to the question of what has drawn Yellowknife more than 3,000 nautical miles south from its home port of Esquimalt, B.C., to the warm waters off Guatemala and around the Galapagos: cocaine. That and a host of other drugs

Together with its sister ship Whitehorse, Yellowknife has been patrolling these Pacific waters far from the shipping lanes since March, looking for vessels smuggling drugs north. Together with an Aurora patrol aircraft, the two ships make up Operation Caribbe, the Canadian contribution to a much larger, 14-nation endeavour to choke off the movement of drugs in the eastern Pacific and the Caribbean. The year 2019 marked the 13th year that Canadian naval vessels headed south on these patrols.

It is largely guesswork, but an estimated 40 per cent of the cocaine produced annually (about $34-billion worth) heads north from South America each year. It goes mostly to the United States, but make no mistake, cocaine is a Canadian problem too; Canada ranks second in per capita cocaine use globally, and in 2014 alone, the highly addictive stimulant was a factor in 297 deaths. Organized crime is deeply involved in its distribution and sale in Canada, as well. But fighting Canada’s cocaine problem starts in the waters off Guatemala.

These are busy days for the Royal Canadian Navy. In late April 2019, while Yellowknife and Whitehorse were operating off Central America, the patrol frigate HMCS Regina was involved in similar work in the Gulf of Aden and other Middle Eastern waters as part of Operation Artemis, Canada’s contribution to the anti-smuggling and anti-terrorist multinational Combined Task Force 150. In June 2019, the Canadian government announced that a Canadian patrol frigate would be joining Operation Neon, the international operation enforcing sanctions against North Korea. The past few years have seen Canadian ships and submarines operating off West Africa, in the Black Sea and the Baltic, in the Mediterranean and the western Pacific, and closer to home in the Arctic. When Joseph Schull wrote his definitive history of the Royal Canadian Navy in the Second World War, he called it Far Distant Ships — that’s an apt description of the navy today.

Pick up a copy of the March/April 2020 issue of Canadian Geographic to read Ian Coutts’ full feature on Operation Caribbe, and scroll down for a glimpse at life onboard HMCS Yellowknife through the lens of photographer Peter Power. 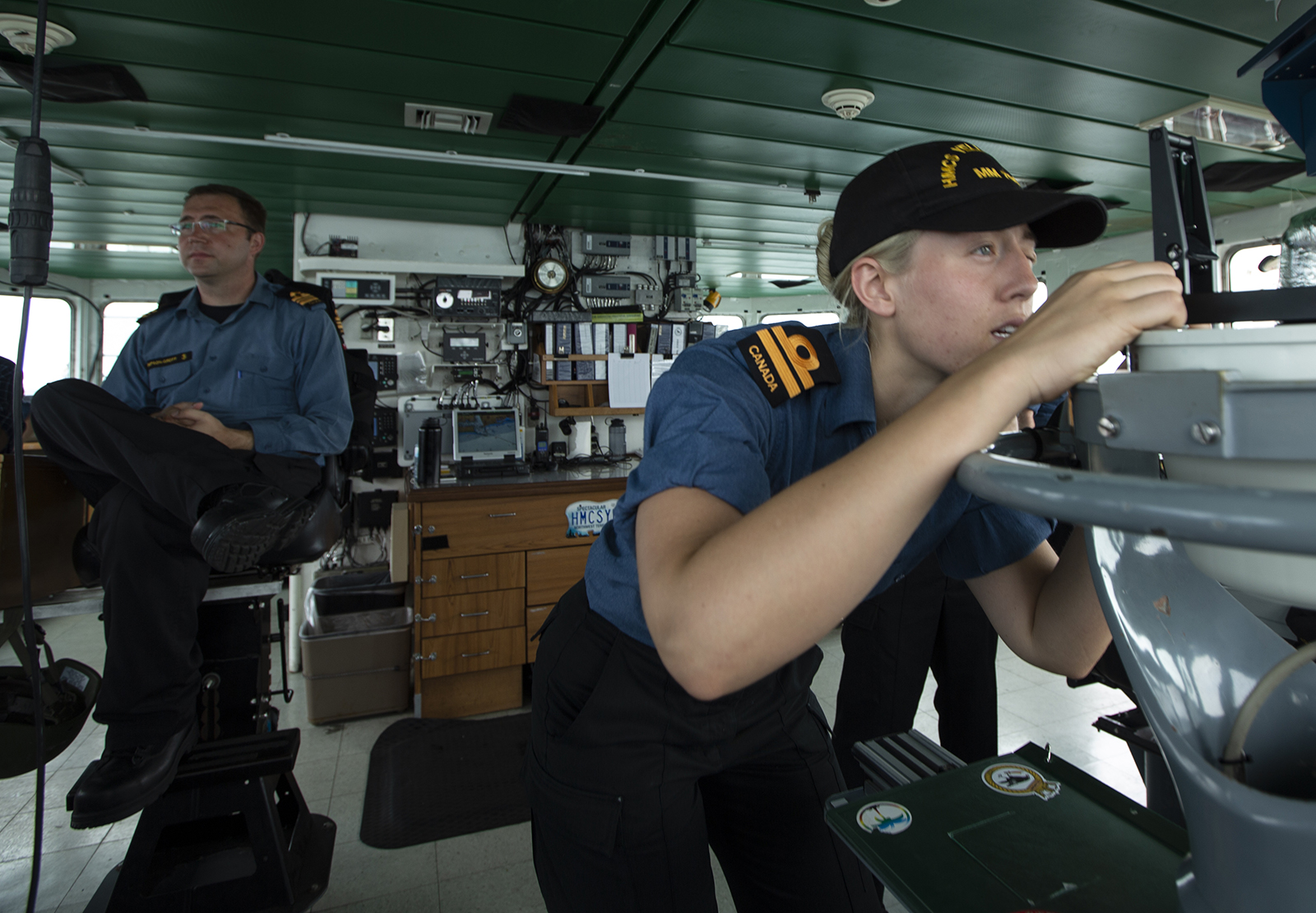 Under the leadership of Lt. Commander Donald Thompson-Greiff, Lt. Navy Anna Childerhose checks her course while navigating out of harbour to continue patrols in the eastern Pacific. 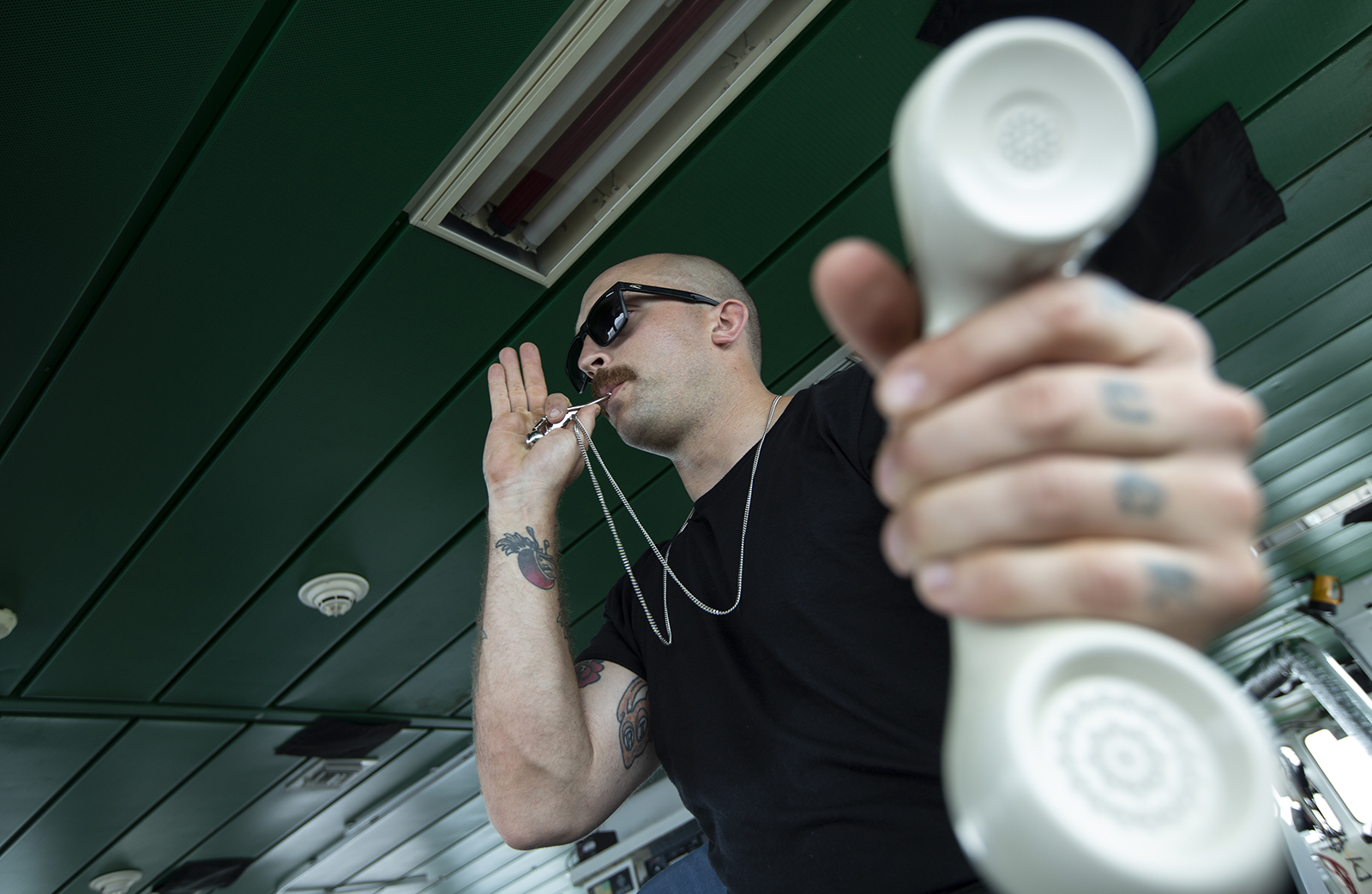 Leading Seaman Tyson Thomas pipes dinner over the ship's intercom during a patrol. 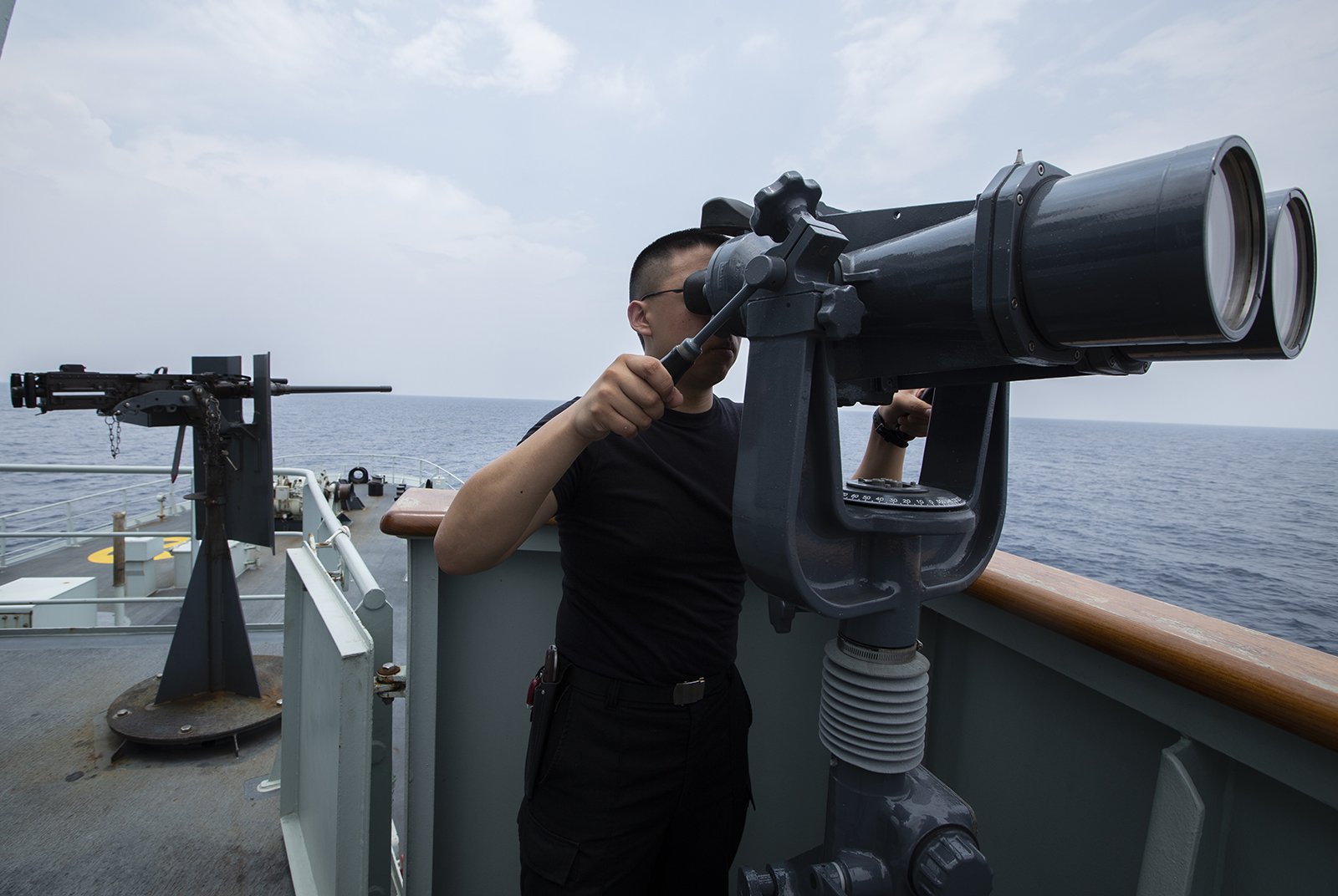 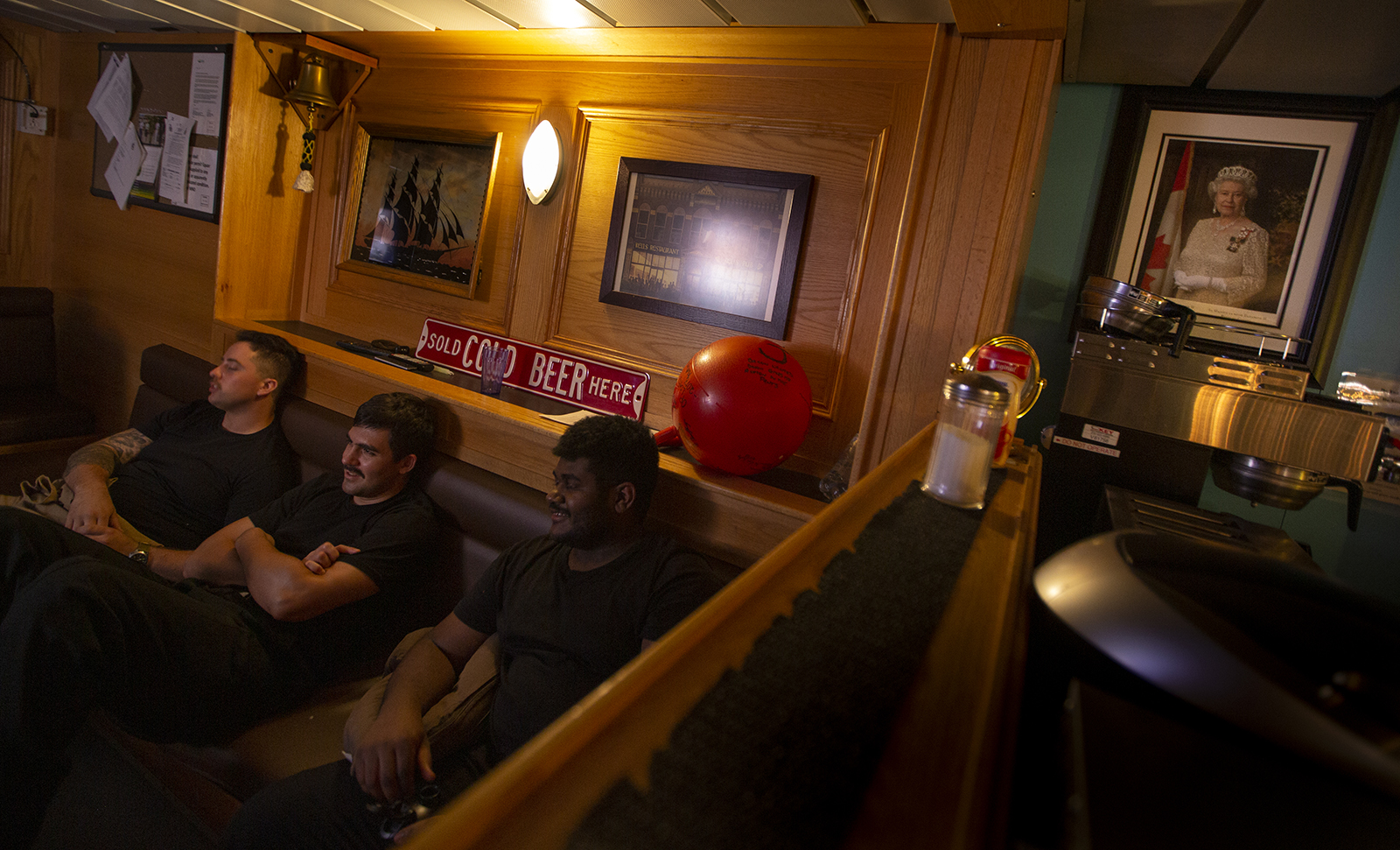 Sailors enjoy a movie in their downtime in the junior ranks mess. 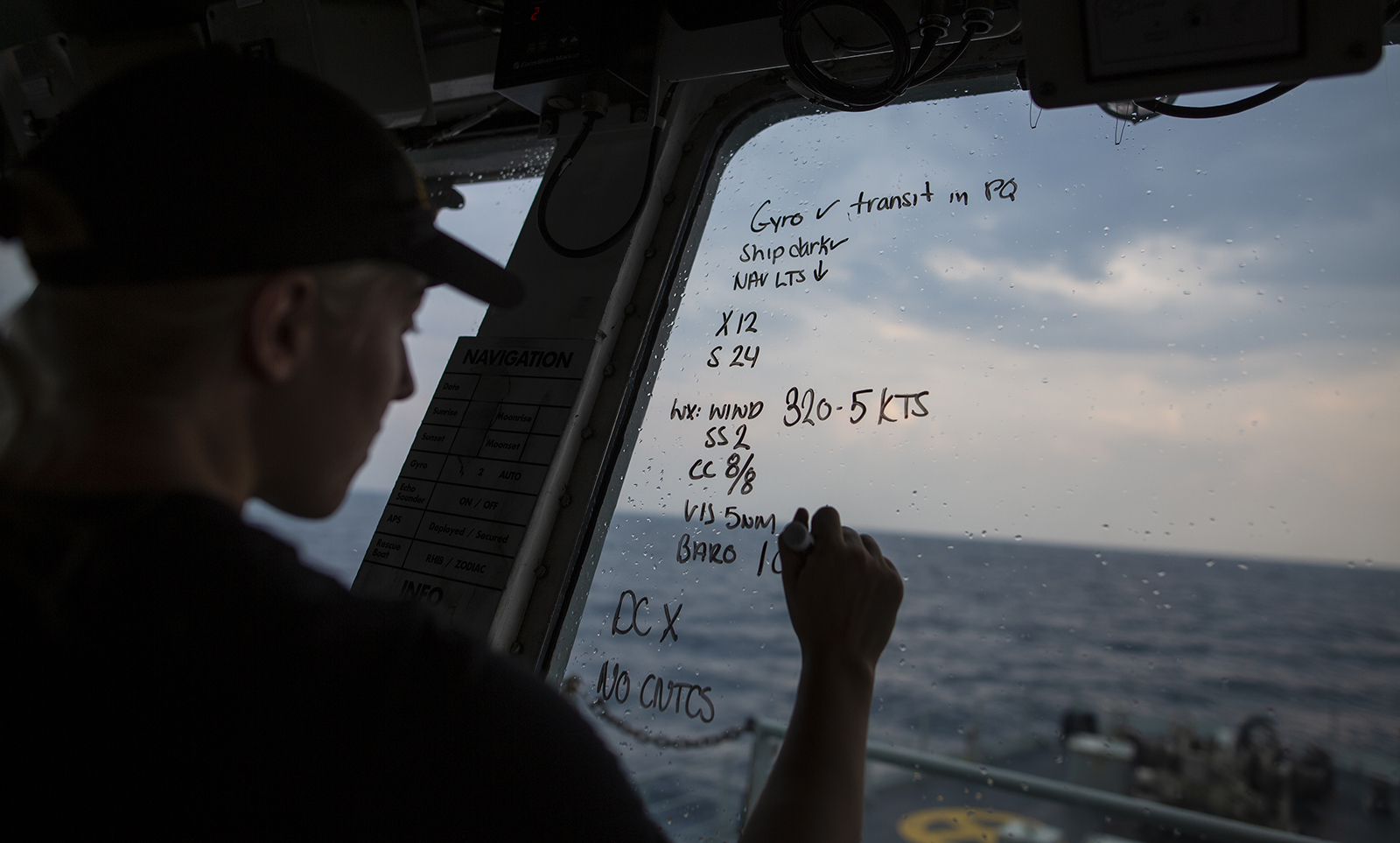 While serving as Officer of the Watch, Lt. Navy Anna Childerhose keeps notes on the windows of the bridge during a patrol. 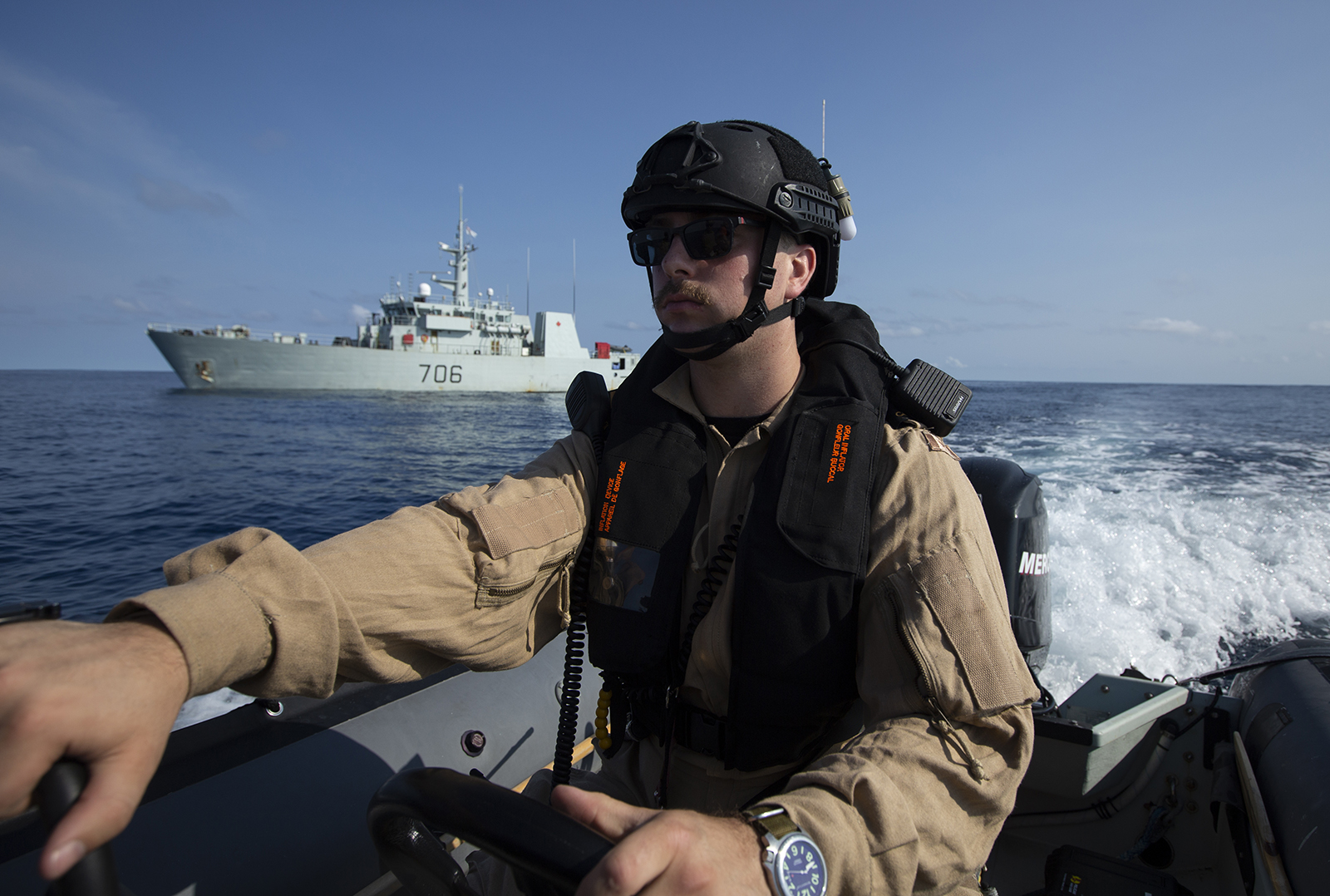 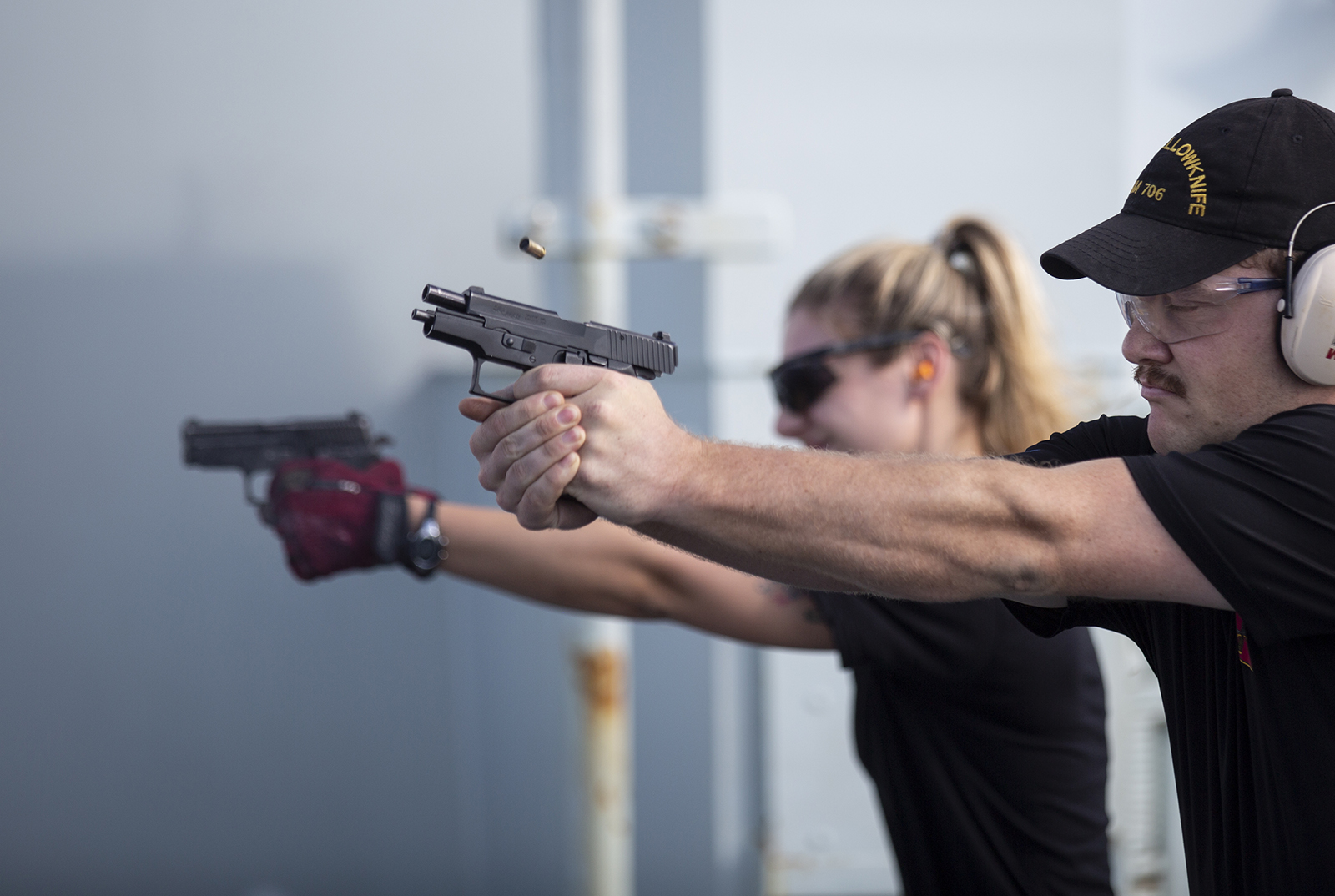 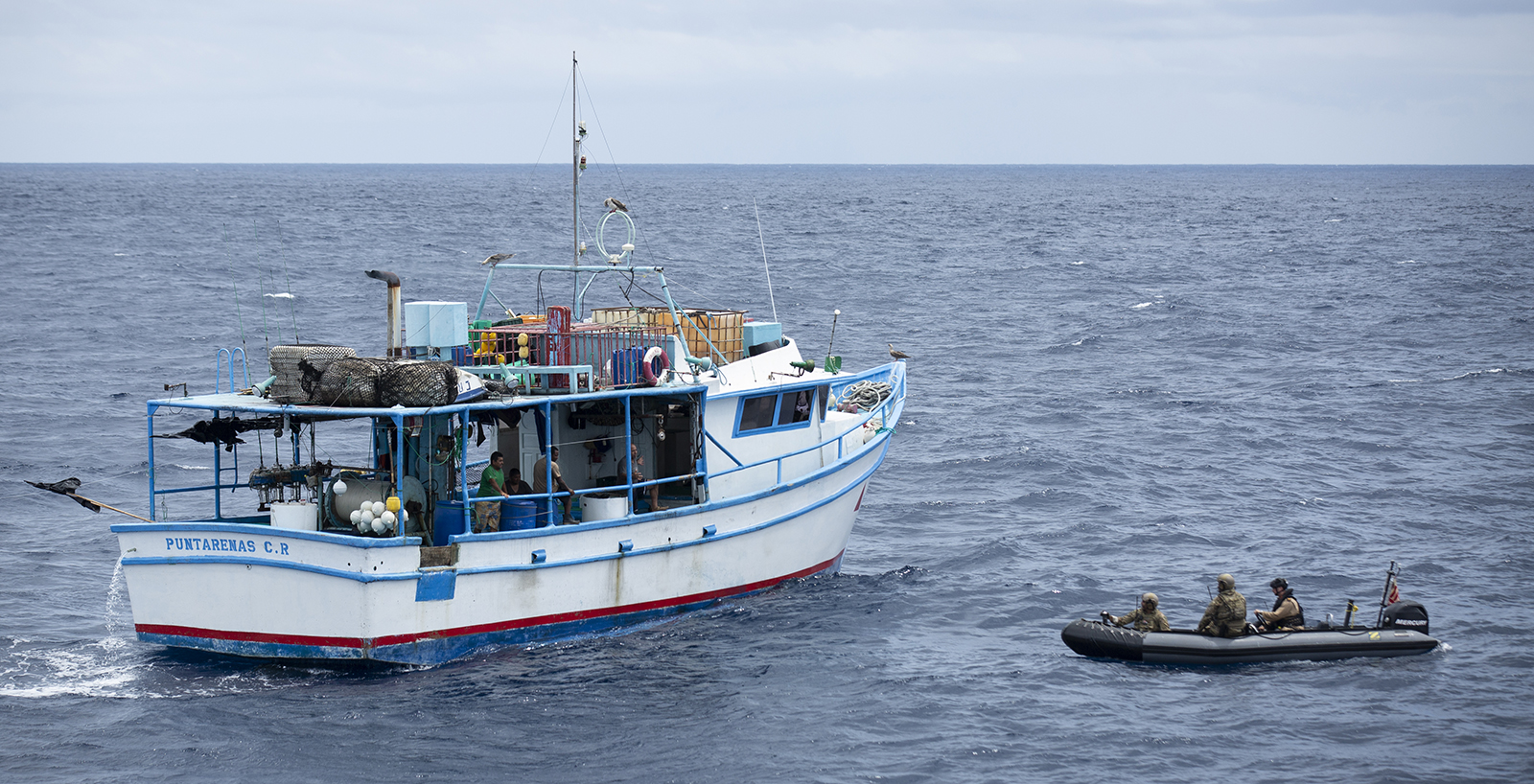 A US Coast Guard boarding party, serving with HMCS Yellowknife, approaches a suspect vessel during a patrol. 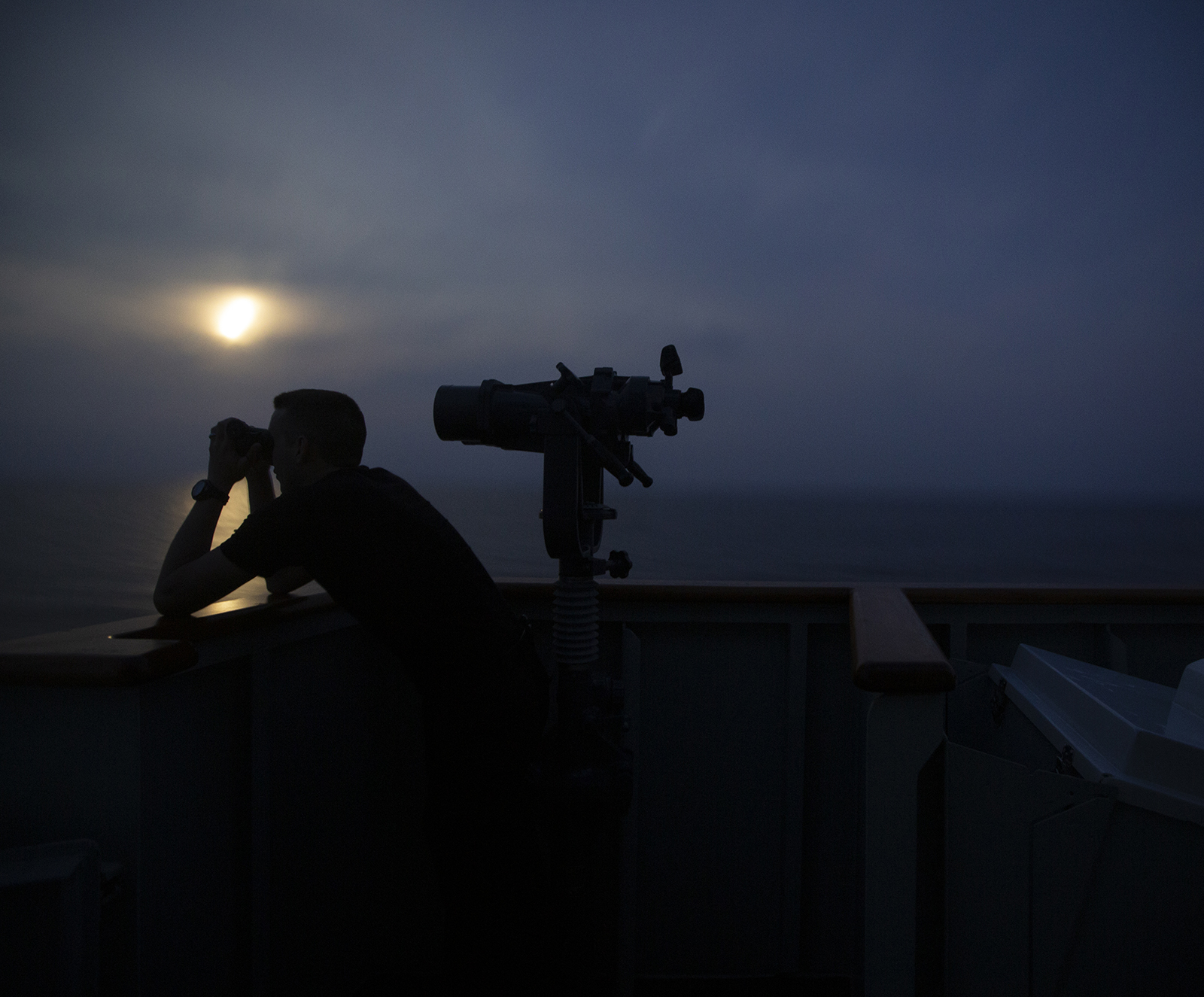 Beneath a cloud-covered moon, Leading Seaman Roy scans the horizon with night vision goggles while on watch. 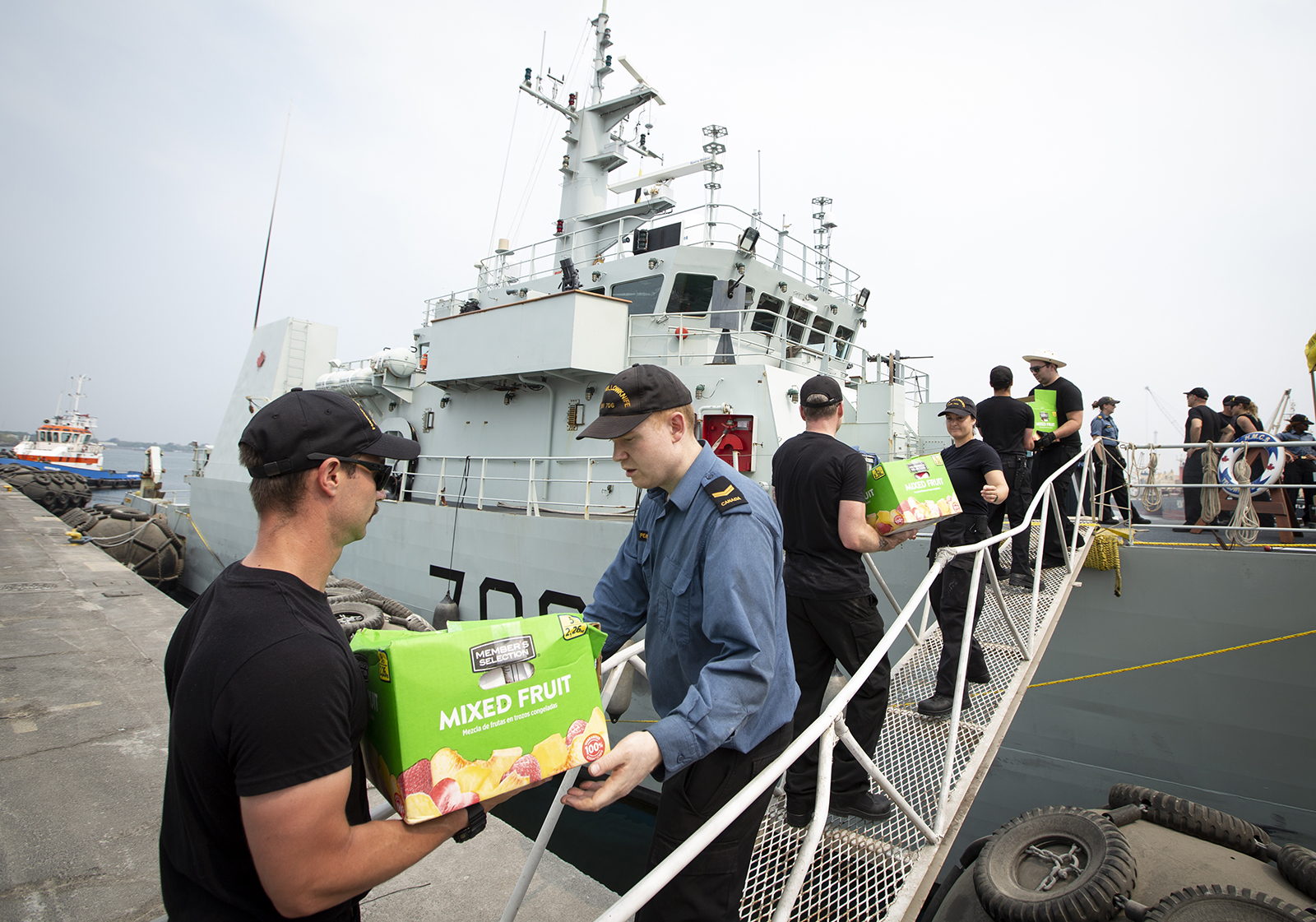 The crew of HMCS Yellowknife forms a line to restock the ship with fresh food and supplies before the next leg of her mission in the eastern Pacific.