Three finalists in this year’s Canadian Geographic Challenge enjoyed the trip of a lifetime as part of their prize, and we were there to capture the fun
By Alexandra Pope
July 24, 2019

“I never thought, when I went to the library and found a Canadian Geographic magazine, that seven months later I’d be here.”

It’s the final day of One Ocean Expeditions’ 2019 East Coast Fins and Fiddles expedition cruise, and 13-year-old Xavier Spano is munching on a baguette topped with brie while looking out across a shallow bay at the bare, rocky hills of the island of Saint Pierre. A few kilometres away, his fellow 2019 Canadian Geographic Challenge finalists Micah Colman, 13, and Timothy Tao, 12, are hiking on the steep, windswept cliffs, enjoying panoramic views of this tiny overseas collectivity of France located off the southwest coast of Newfoundland.

Over the course of 10 action-packed days, the boys have scrambled over the sand dunes on Sable Island, splashed in the cold surf on the wild, uninhabited coast of Anticosti Island, tapped their toes to jigs and reels performed by renowned Cape Breton family band the Barra MacNeils in the lounge onboard the RCGS Resolute, and spotted dozens of puffins, seals and whales. In short, they’ve thoroughly explored the geography, history, wildlife and culture of Canada’s East Coast — a fitting reward for the months of study and preparation that went into their successful run in this year’s Challenge.

The Canadian Geographic Challenge is a national geography competition for students in Grades 4 to 10. Participants complete a series of tests at the classroom, school and provincial or territorial level. Then, in May, the 20 top-performing students in Grades 7 to 10 gather in Ottawa for a final weekend of testing, including a written test and a fieldwork test. The top five go on to compete in a live, Jeopardy!-style game show to ultimately crown a national champion.

More than 22,500 students participated in the 2019 Challenge, so to make the top five is quite an accomplishment. That’s why since 2017, One Ocean Expeditions has offered a berth on its Fins & Fiddles voyage to the five finalists. This year’s national champion, David Landry, and runner-up Ryan Sharpe were returning finalists and went on the cruise in 2018.

The Canadian Geographic Challenge celebrates its 25th anniversary in 2020; register your classroom on the website!

Scroll down to see some of the highlights from the 2019 Fins and Fiddles voyage.

This 34-square-kilometre island located about 200 kilometres off the coast of Nova Scotia is the visible part of a vast submarine sandbar upon which hundreds of ships have been wrecked over the centuries. Today, the island is inhabited by a handful of researchers and Parks Canada staff — and about 500 wild horses that feed on the marram grass covering the wind-carved dunes. 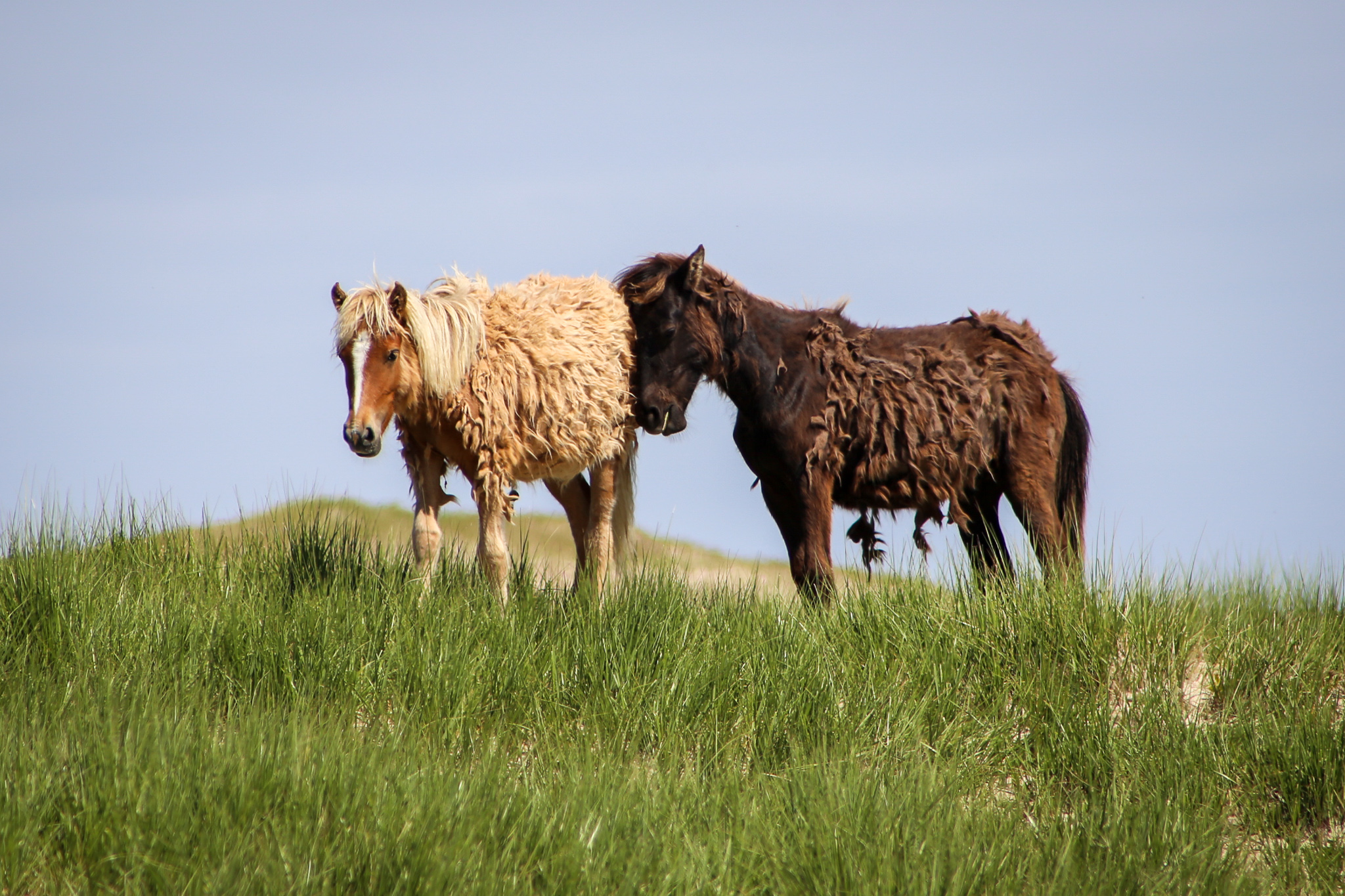 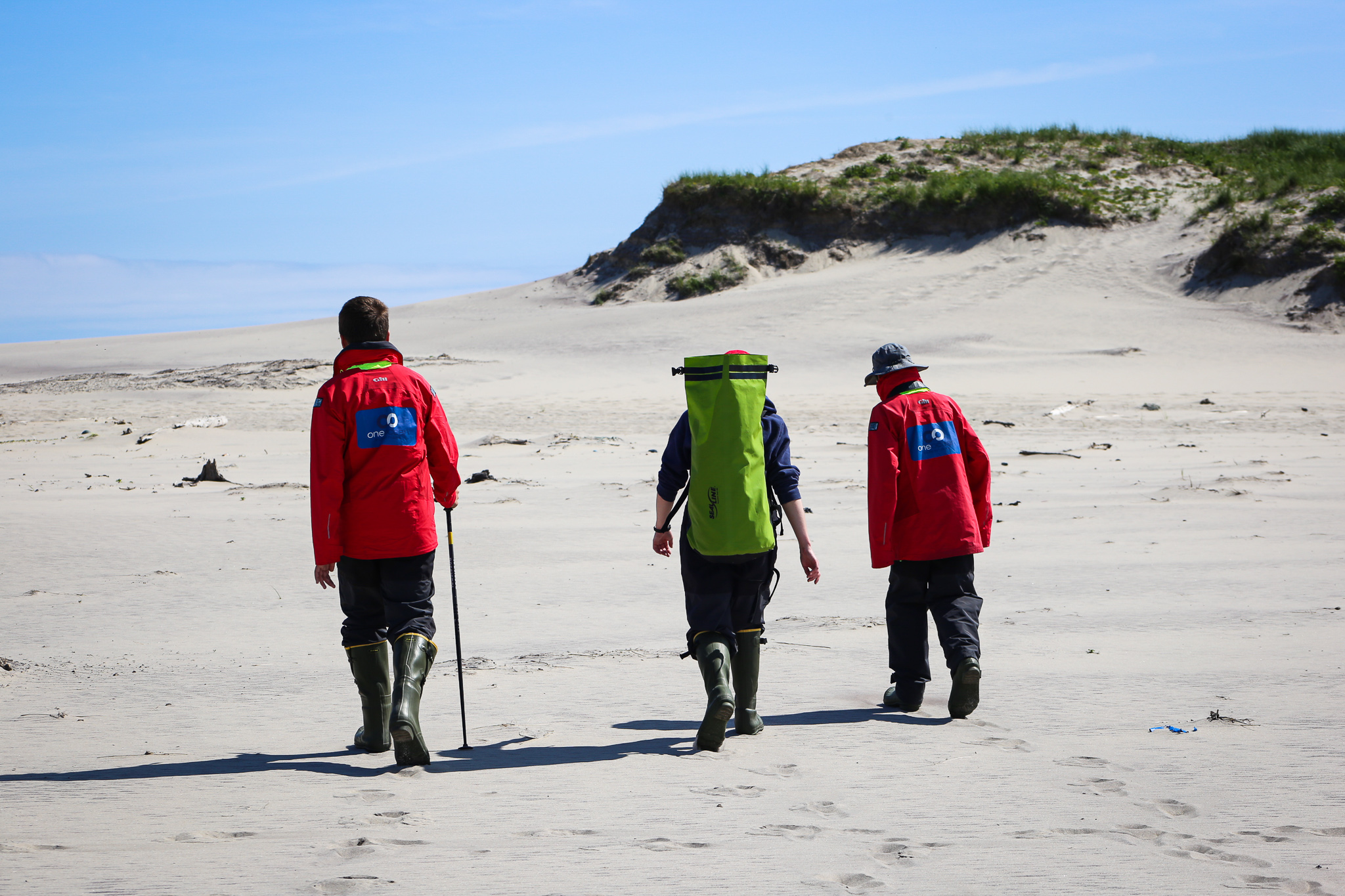 Following its long detour to Sable Island, the RCGS Resolute returned to Cape Breton, launching passengers in Zodiacs to circle the aptly-named Bird Island, home to nesting Atlantic puffins, razorbills, eagles and gulls. In the afternoon, it was off to Baddeck, N.S. by bus to pay a short but interesting visit to the Alexander Graham Bell National Historic Site. 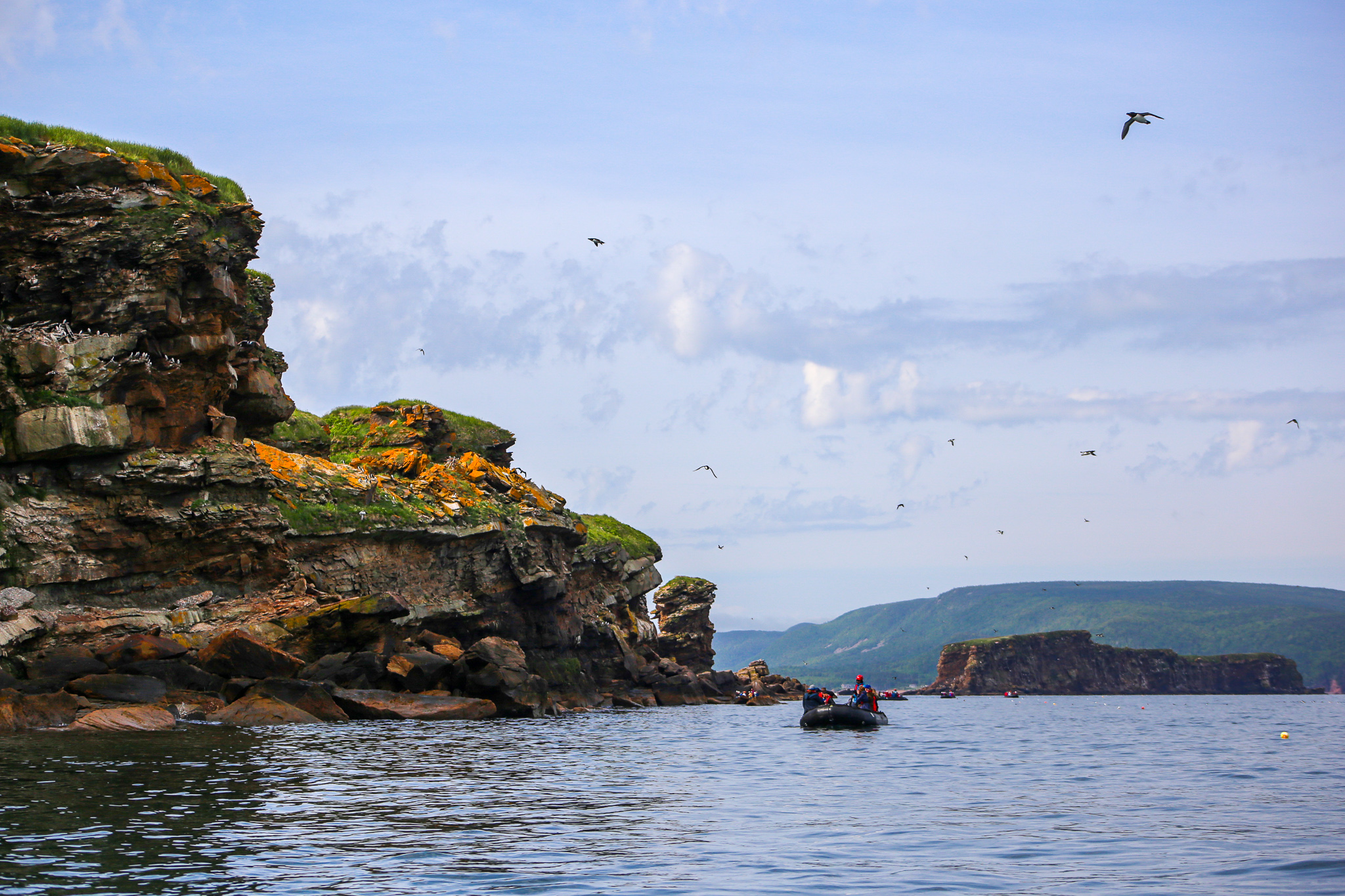 There's plenty to see and do in the birthplace of Confederation, including learning about the meeting that created Canada at the Confederation Centre of the Arts (a temporary installation while Province House undergoes an extensive renovation, expected to be complete in 2022). But when the sun’s shining, there’s no more essential stop in Charlottetown than the famous Cows Ice Cream. 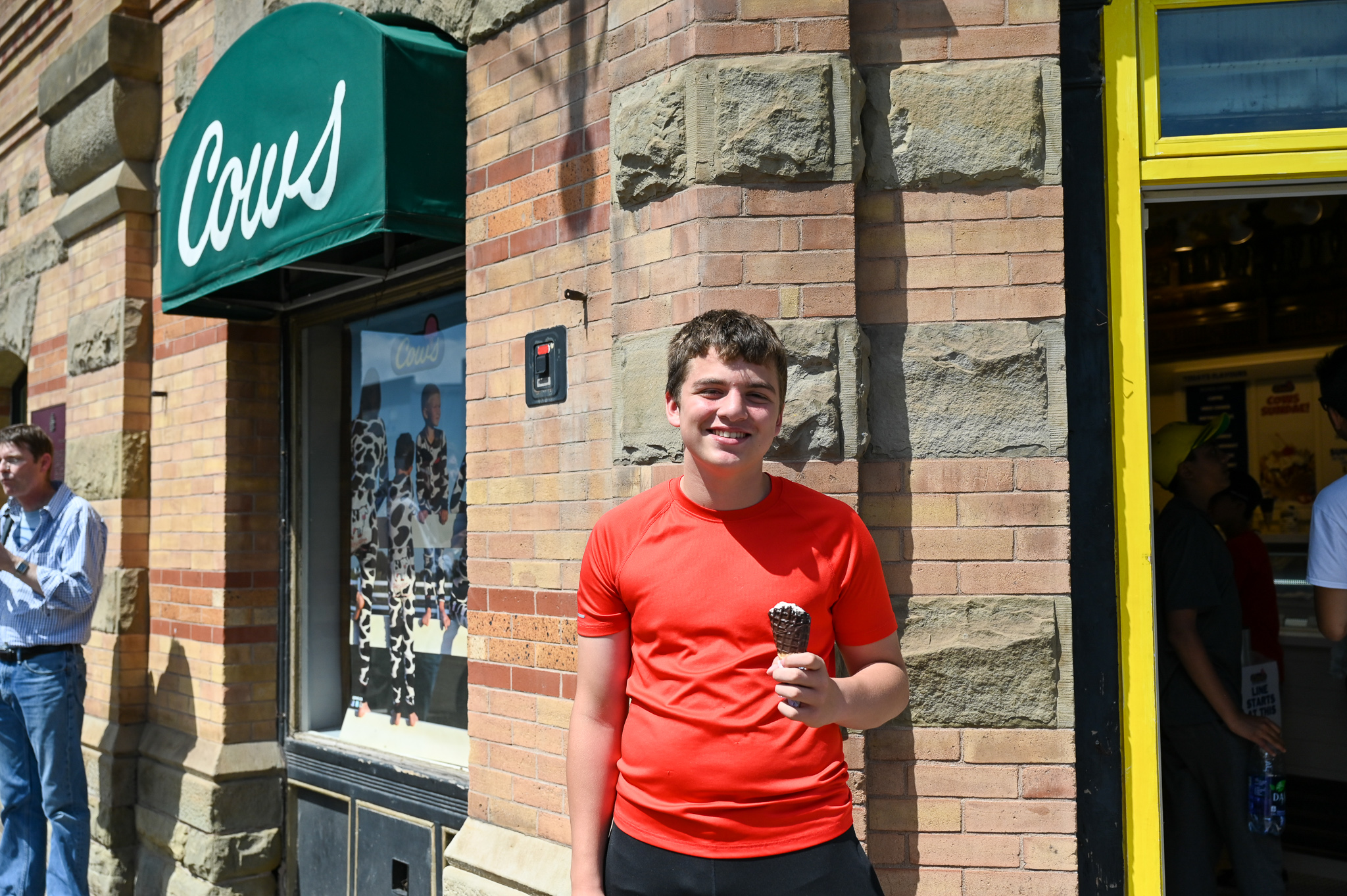 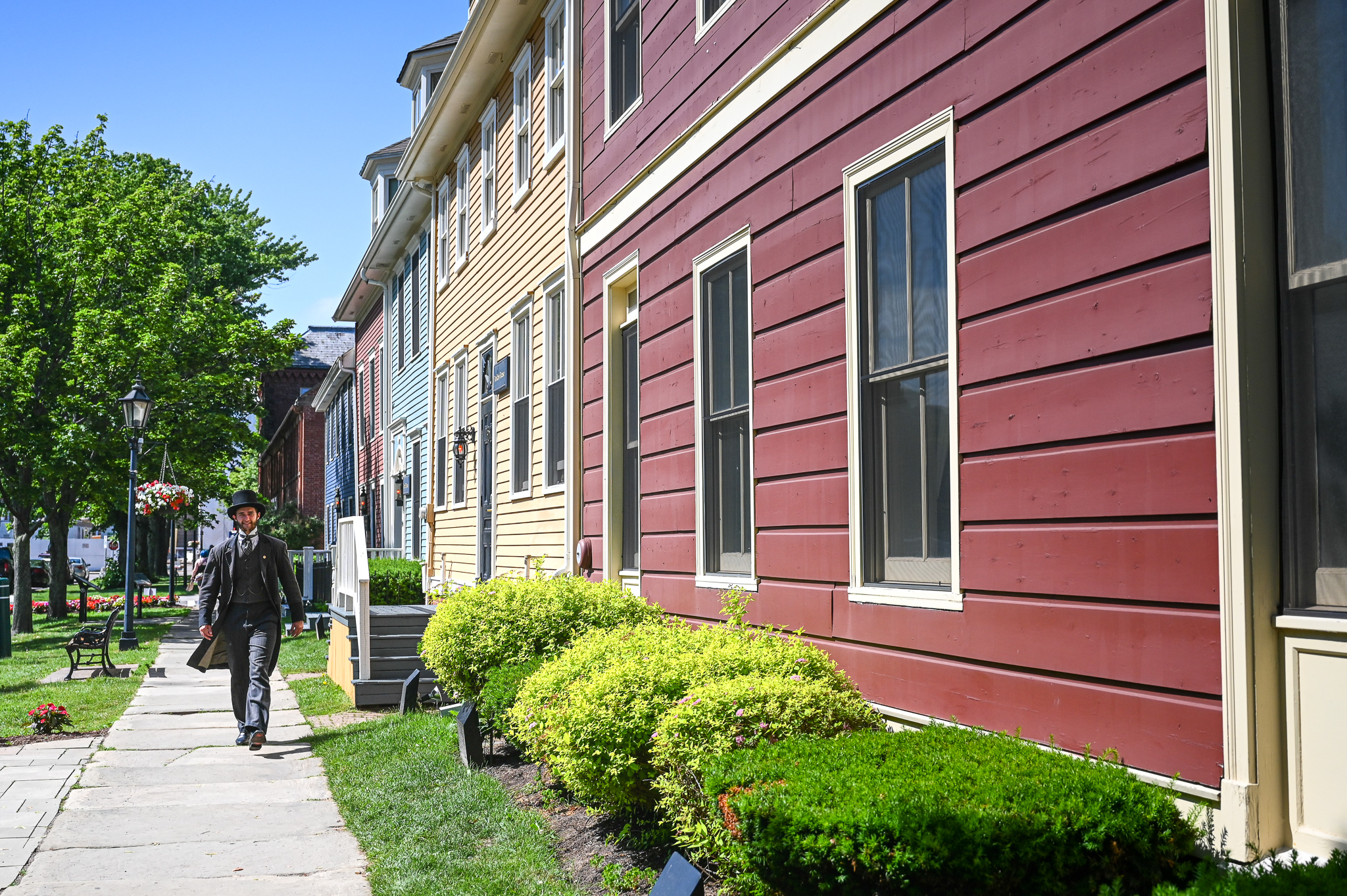 Regular readers of Canadian Geographic will be plenty familiar with the northern gannet colony of Bonaventure Island, a small protected island located off the tip of Quebec’s Gaspé peninsula. Tens of thousands of the striking white-and-beige seabirds return to its steep cliffs each summer to breed, and a hike to their cacaphonous nesting grounds is an essential part of any visit to Percé, as is a stroll to the Mont-Joli lookout in town to take in the views of the famous Rocher Percé. 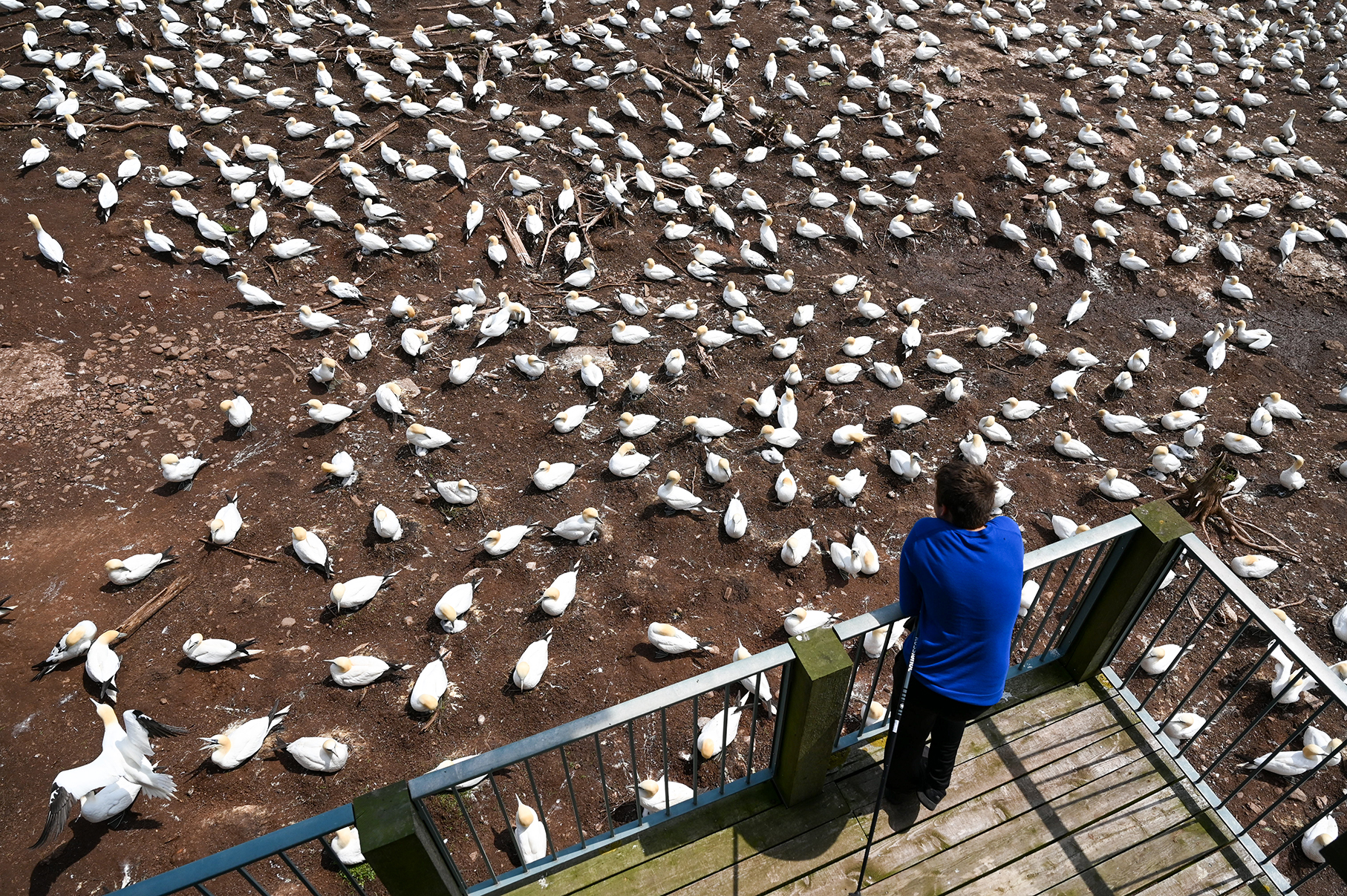 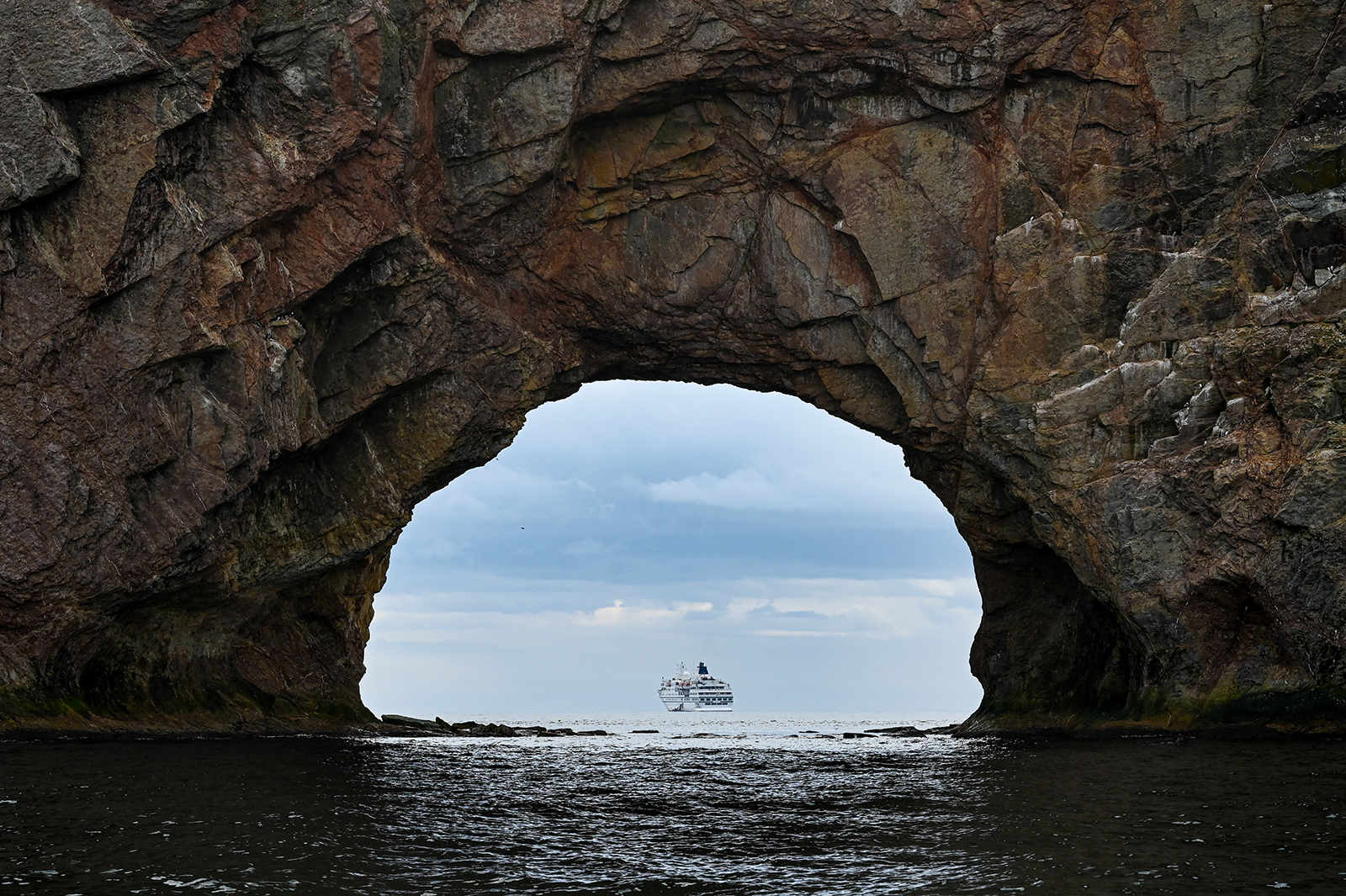 The RCGS Resolute is visible through the natural arch in the Rocher Percé. (Photo: Alexandra Pope/Canadian Geographic)

What do you do on a remote island off the North Shore of the Gulf of St. Lawrence where white-tailed deer outnumber people by about 400 to one? Why, have a beach party, of course! After sea kayaking and Zodiac cruising beneath the island’s dramatic limestone cliffs, spotting black-legged kittiwakes and northern gannets, the Challenge finalists and their chaperones splashed in the cold surf and even tried stand-up paddleboarding. 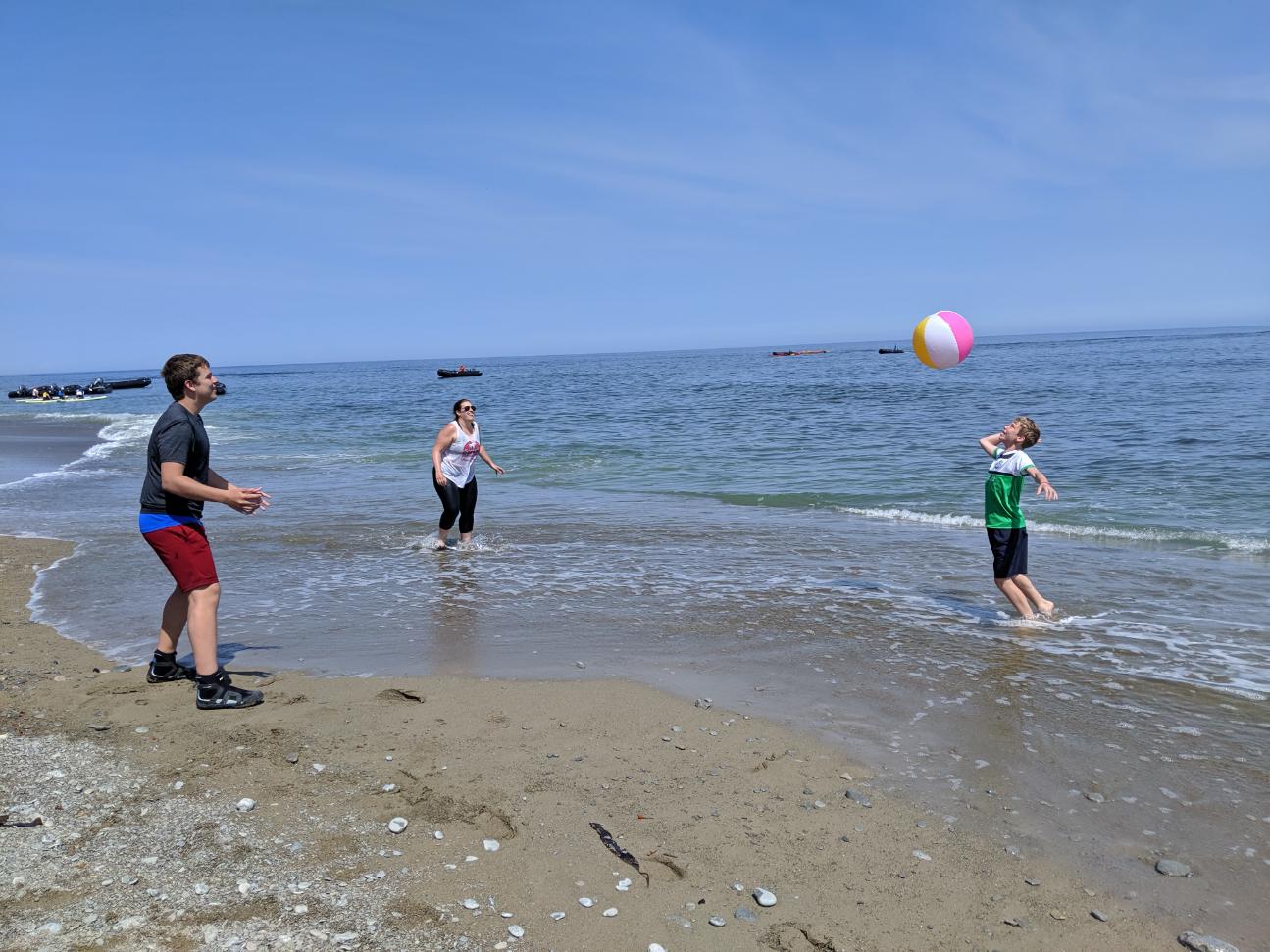 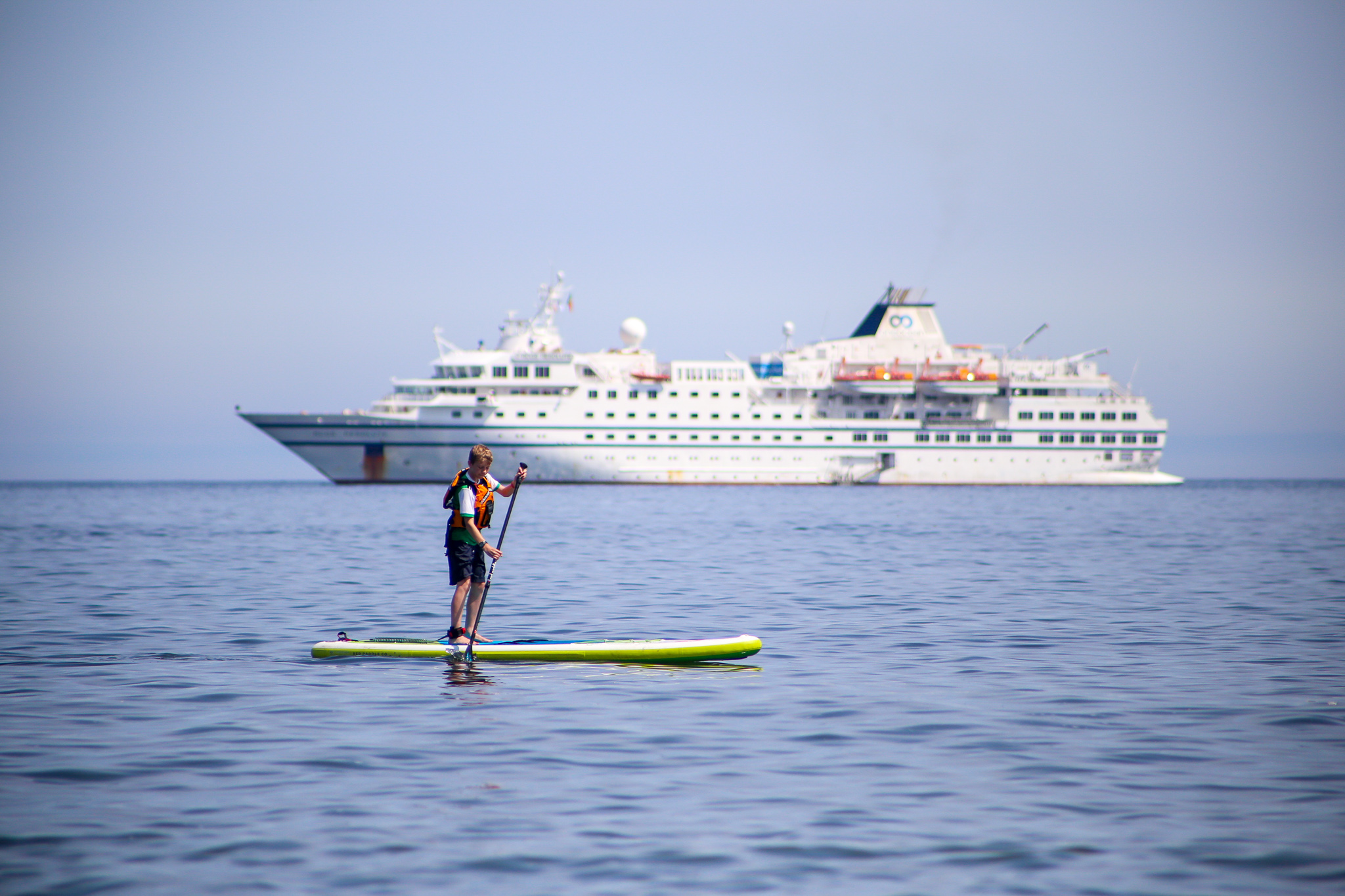 Of all the stops on the Fins and Fiddles voyage, this was perhaps the most fitting for our group of young geographers. After all, where else but this vast, mountainous park — whose unique geology was crucial to proving the theory of plate tectonics and continental drift — can you walk on Earth’s exposed mantle and the crust of an ancient ocean? 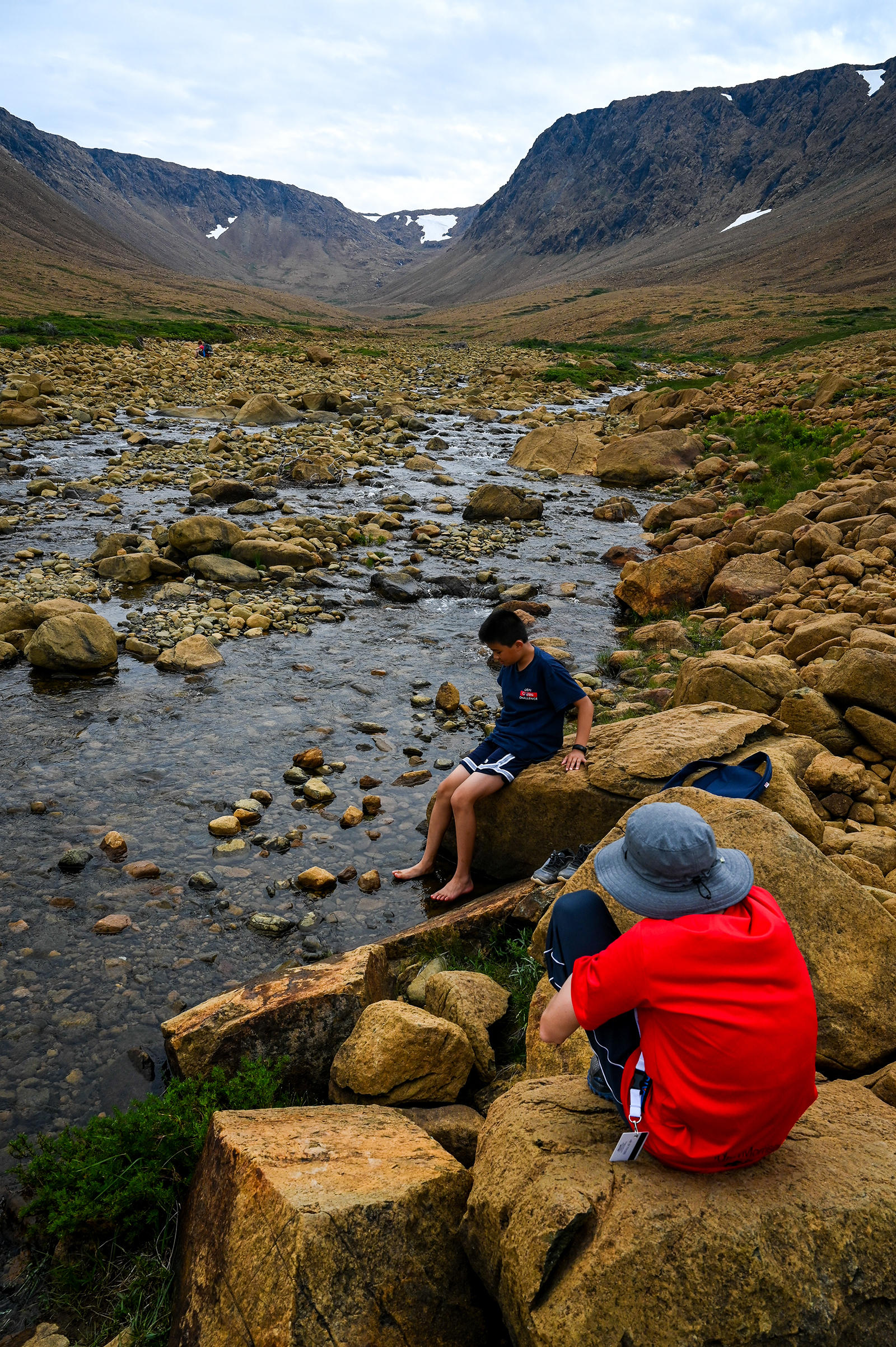 Thank you, One Ocean Expeditions! 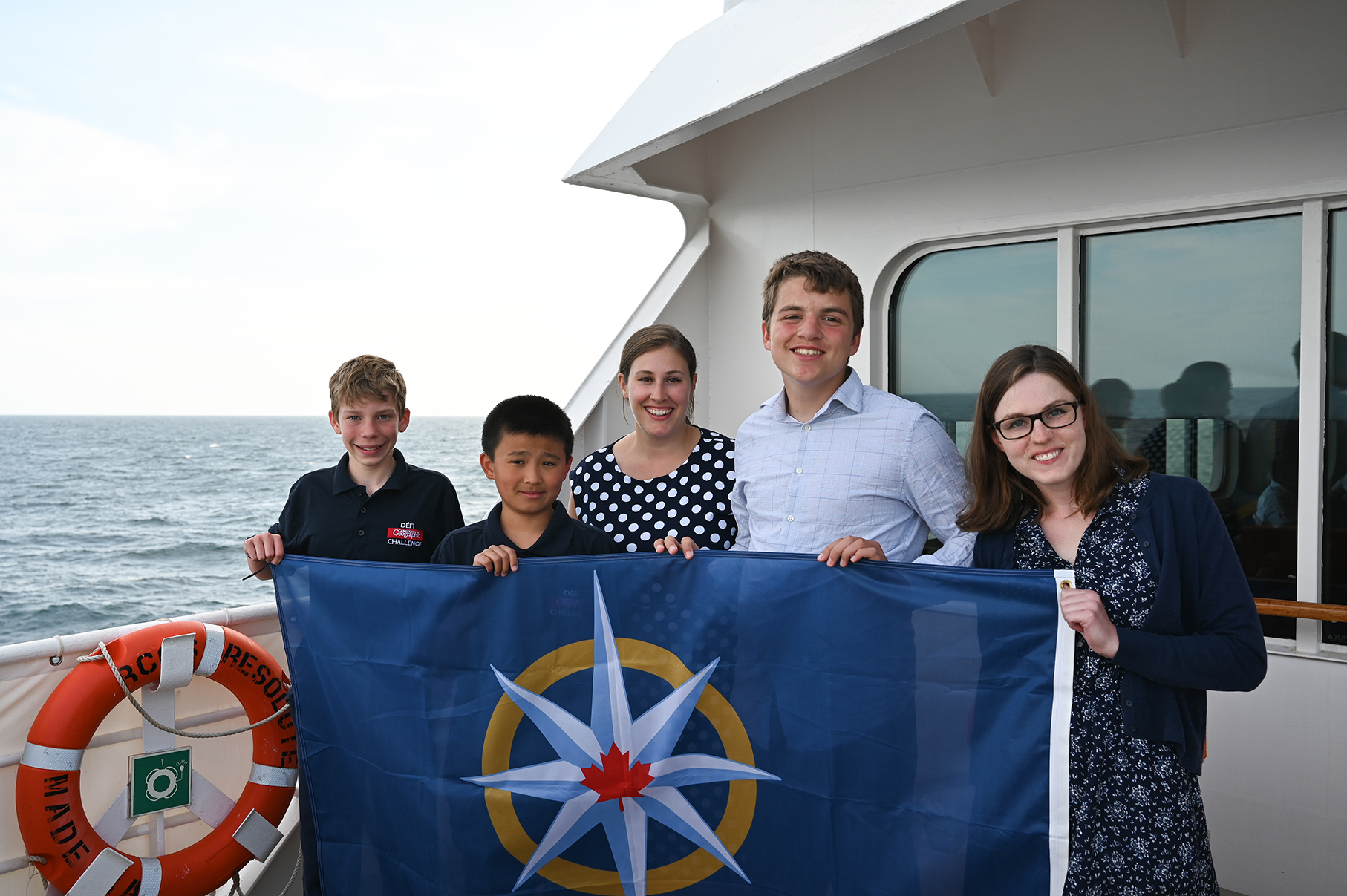 Micah Colman, Timothy Tao, Alexandra Pope, Xavier Spano and Emma MacLean pose on the deck of the RCGS Resolute on the final evening of the trip.