Photos: Across the Arctic with Canadian astronaut Chris Hadfield

Paul Colangelo shares images from his time exploring the North with the first Canadian to walk in space
By Alexandra Pope
With photography by Paul Colangelo
April 25, 2017

Chris Hadfield believes in the power of ideas.

Since retiring from the Canadian Space Agency, the Canadian astronaut — who rocketed to global fame in 2013 thanks to his multimedia dispatches from orbit as commander of the International Space Station — has dedicated his seemingly boundless energy to the promotion of ideas that challenge and excite.

Two years ago, at the urging of his son Evan, Hadfield organized the first installment of what has come to be known as Generator, a sort of 21st-century salon bringing together artists, musicians, inventors and thinkers for a celebration of creativity. The first show sold out Toronto’s Massey Hall, and set in motion discussions that would ultimately see Hadfield bring the Generator concept to the Arctic.

For 18 days in August and September 2016, the astronaut and a team of 10 multimedia storytellers from around the world, including Canadian photographer Paul Colangelo, traversed the Arctic Ocean, from southern Greenland to Resolute, Nunavut, aboard a cruise ship. Their goal? To create art that portrays the Arctic not as a symbol of climate catastrophe or a prize to be claimed, but simply as it is: a region of surprising beauty, with a unique culture, worthy of exploration and understanding.

Here, Colangelo shares some of his photographs from the journey for the first time. 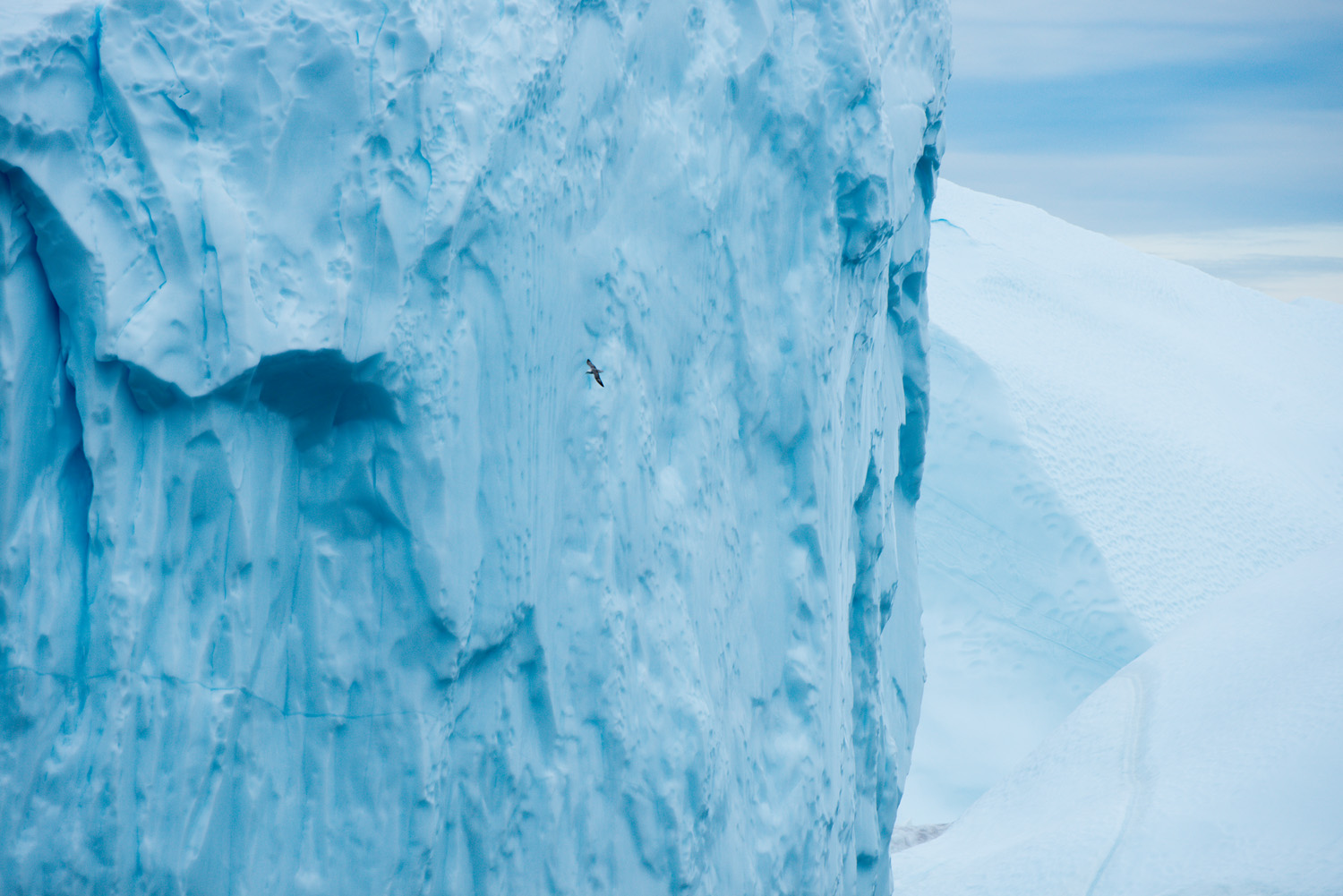 A gull flies next to the face of an iceberg in the Ilulissat Icefjord, Disko Bay, near Ilulissat, Greenland. The Ilulissat Icefjord, a UNESCO World Heritage Site, produces many of the icebergs destined eventually to be found in the shipping lanes further south. Nearly all North Atlantic icebergs come from the great Greenland ice sheet and have been observed as far as 3,200 kilometres from their point of origin. The Titanic was sunk by one such Greenlandic iceberg. 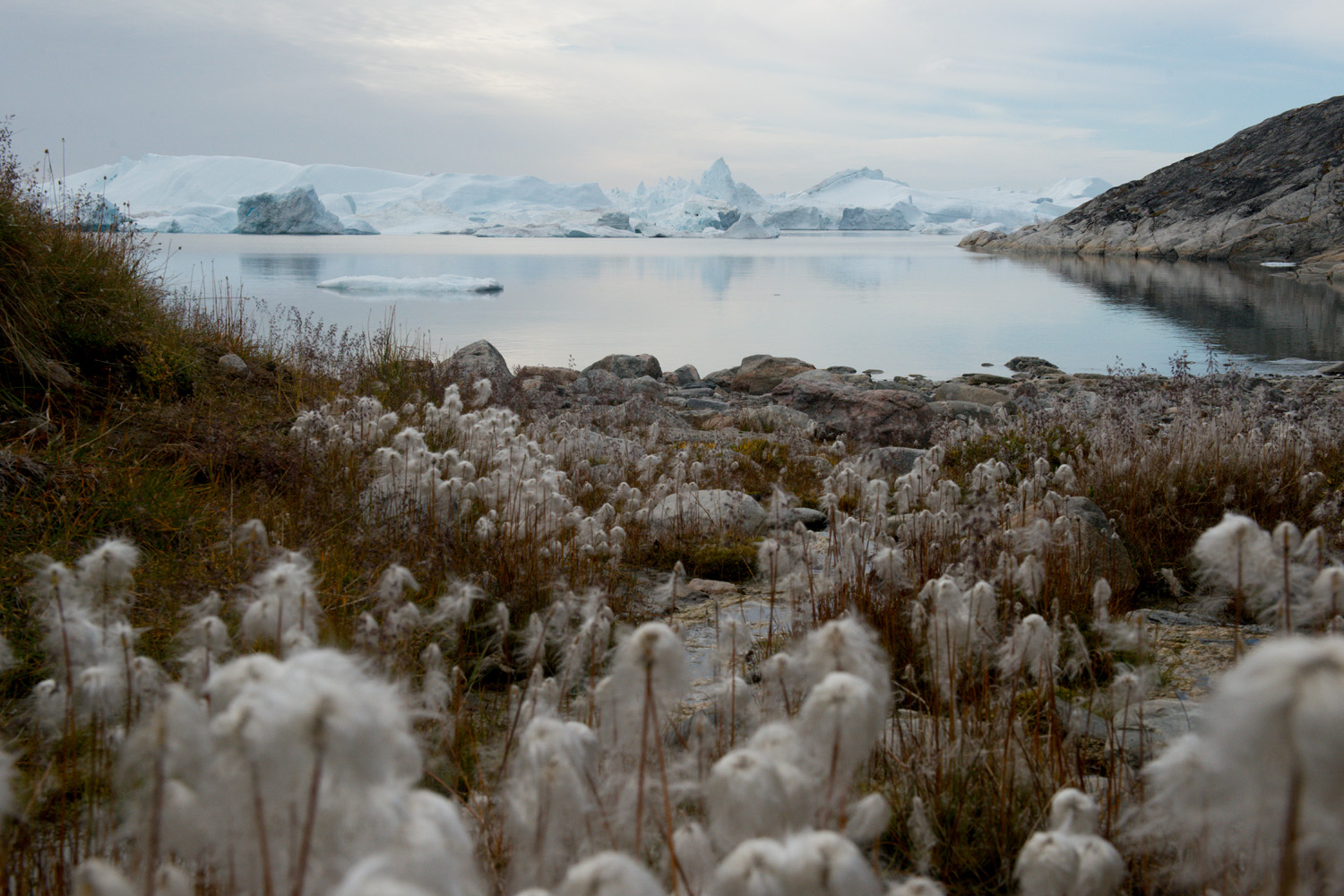 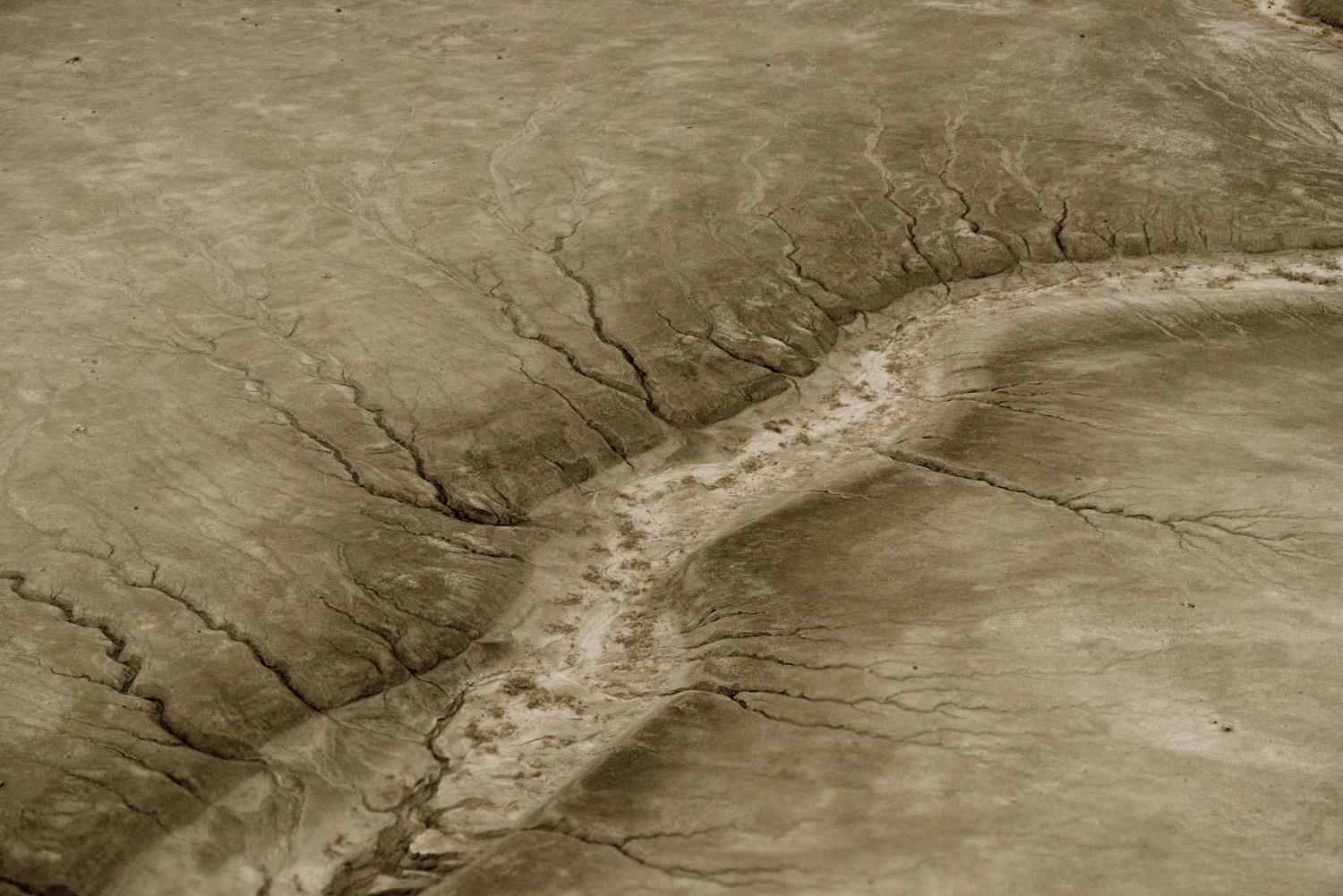 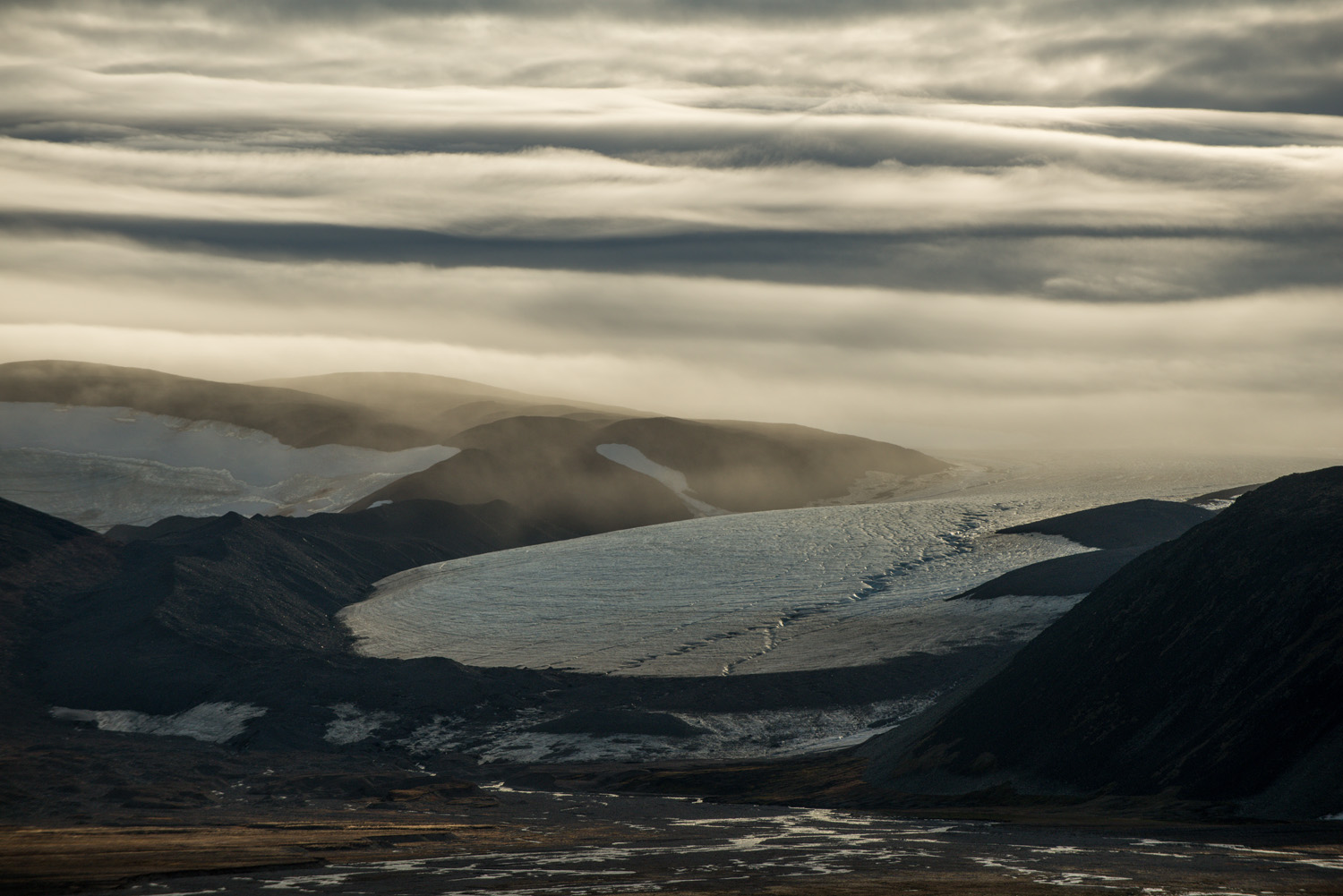 Glaciers on the coast of northwestern Greenland. 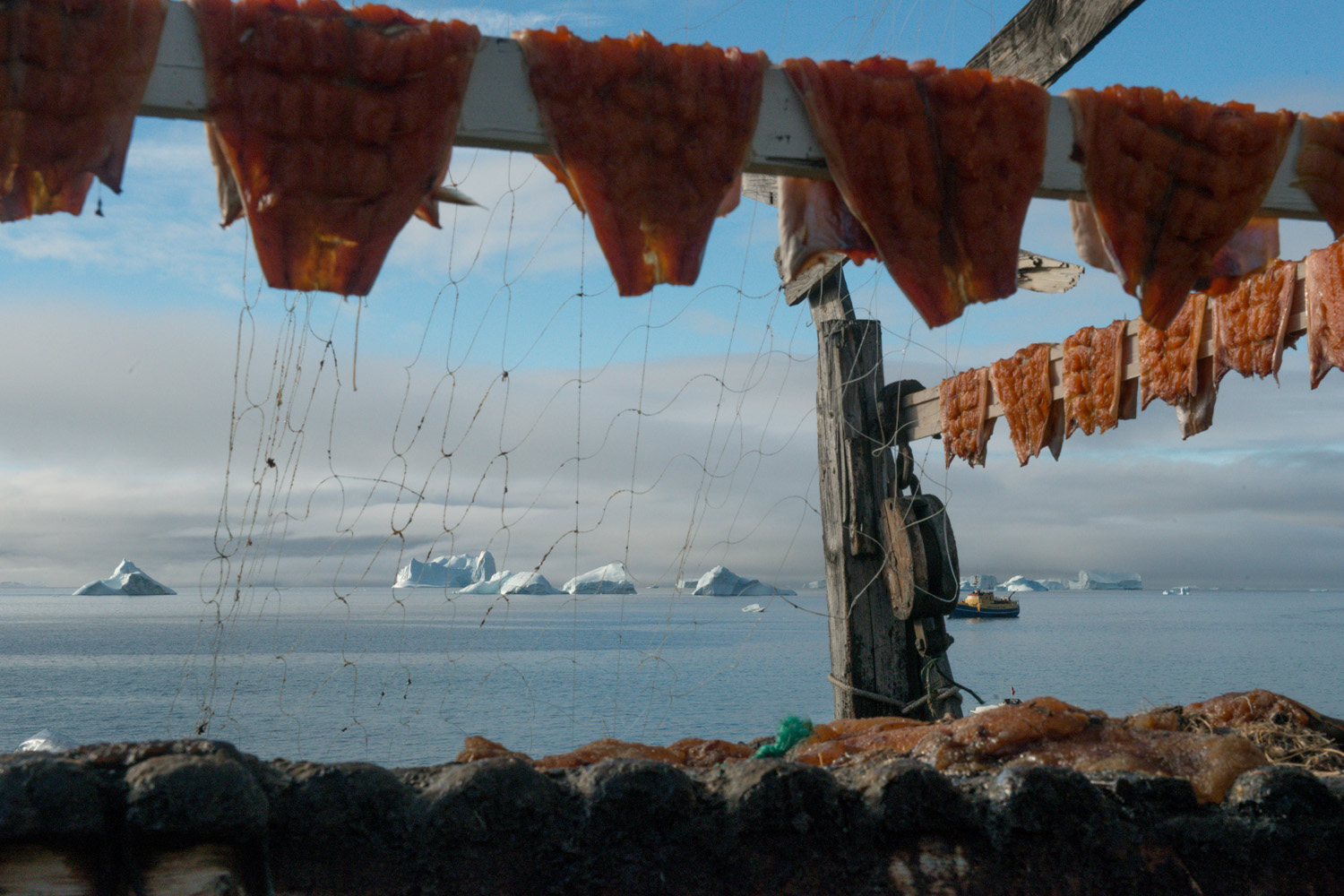 Fish hangs to dry in Qaanaaq, Greenland. Qaanaaq, the world’s most northern palindrome, is also the largest settlement and administrative centre of the Thule District in northwest Greenland. There are about 460 inhabitants (and many sled dogs) in the village, so it is significantly more ‘modern’ than other settlements in northern Greenland. It is a place where the hunting culture melds with the modern world. The small museum housed in Knud Rasmussen’s original trading post (established in 1910) displays many artifacts from the Thule era. The area is ice-free only two months of the year. 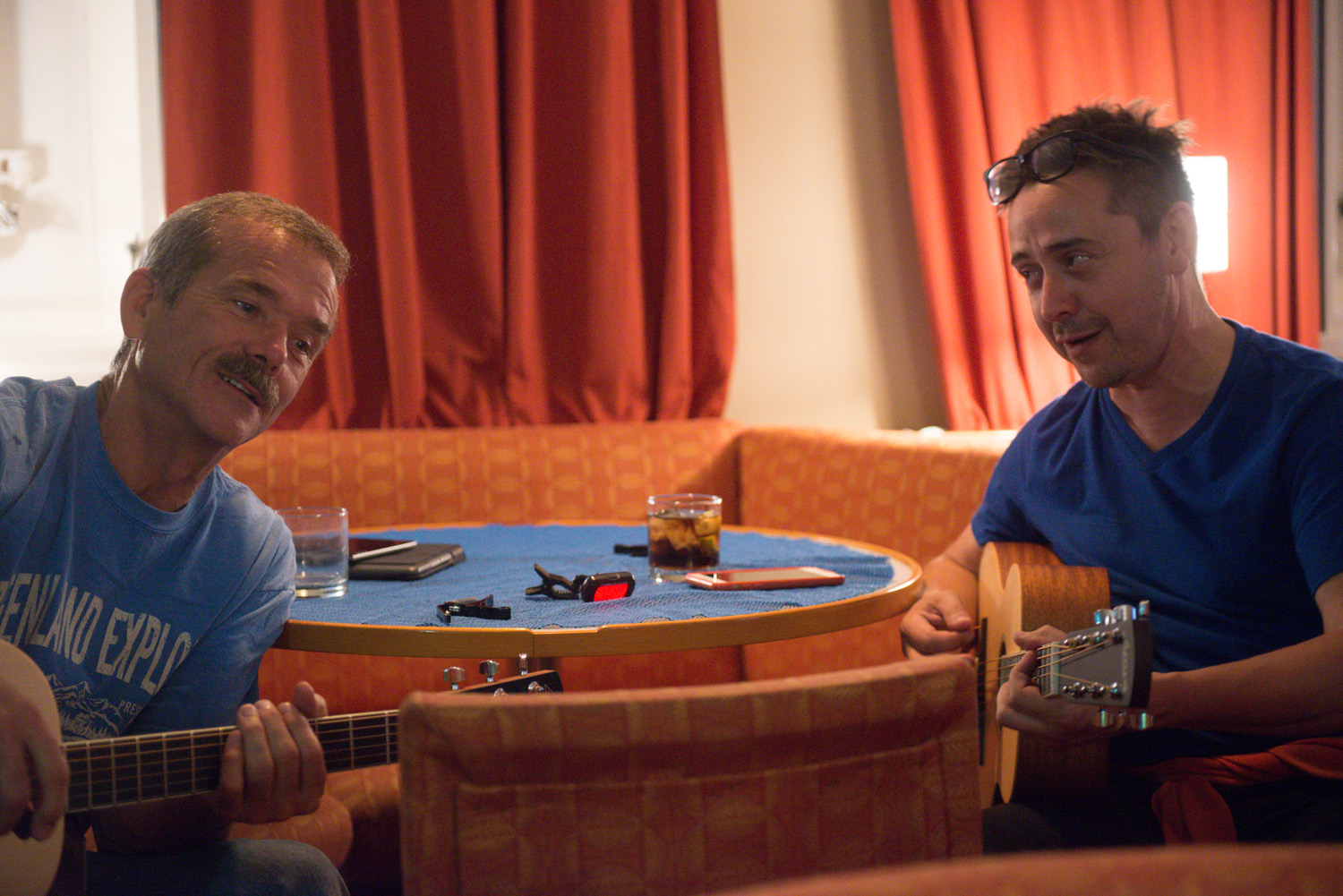 Col. Chris Hadfield and musician Danny Michel jam in the bar of the Soviet-era icebreaker Capitan Khlebnikov, off the coast of Greenland. 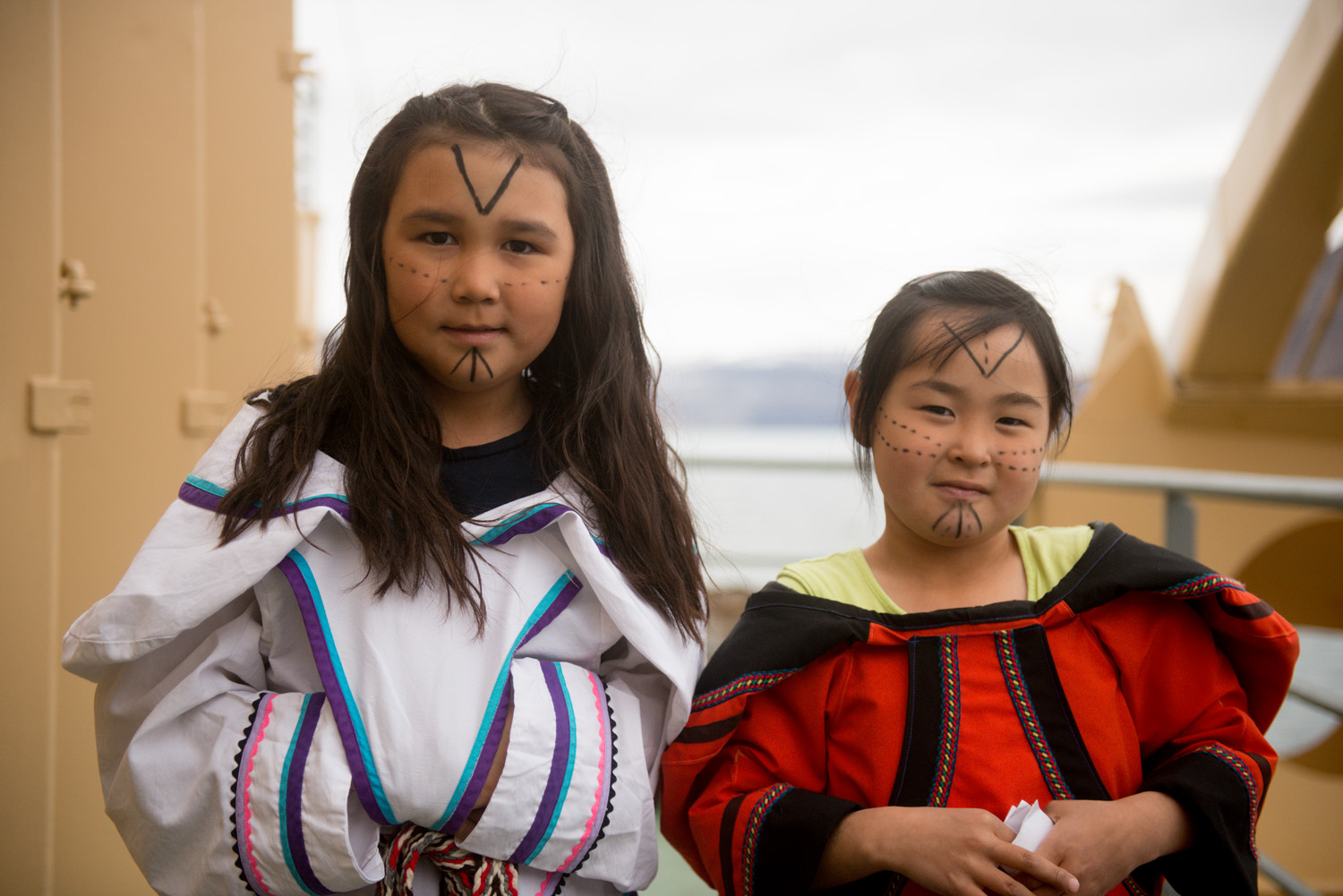 Children from Grise Fjord, Canada visit tourists on the Capitan Khlebnikov, a Soviet-era icebreaker. On the southern coast of Ellesmere Island lies Canadaʼs most northerly inhabited community, Grise Fjord. There is good reason for its Inuktitut name, Aujuittuq – “the place that never thaws." Grise Fjord, which is Norwegian for "pig fjord," owes its name to the Norwegian explorer Otto Sverdrup. It seems that the sounds made by the many walrus that once populated the area reminded him of the grunting of pigs. 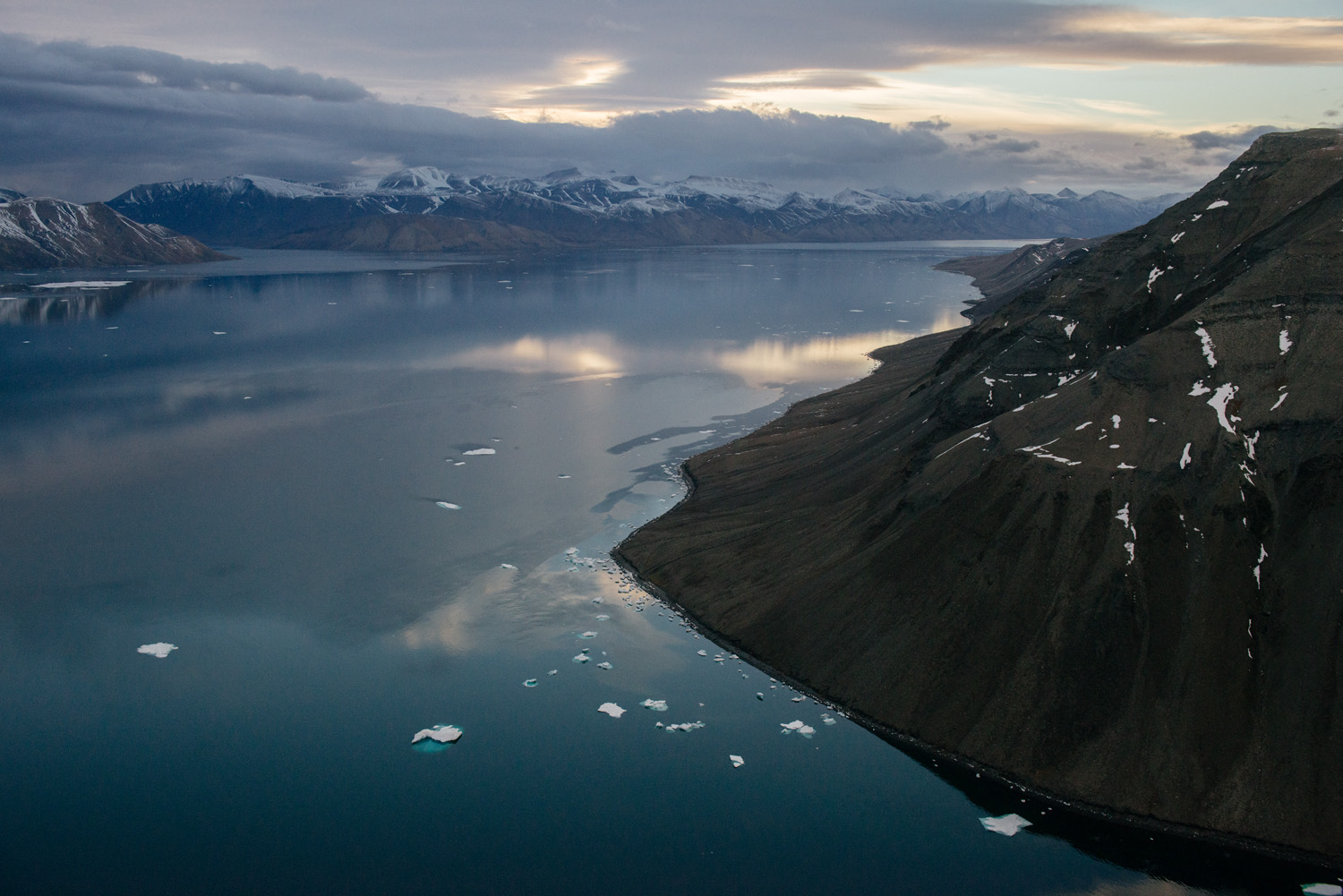 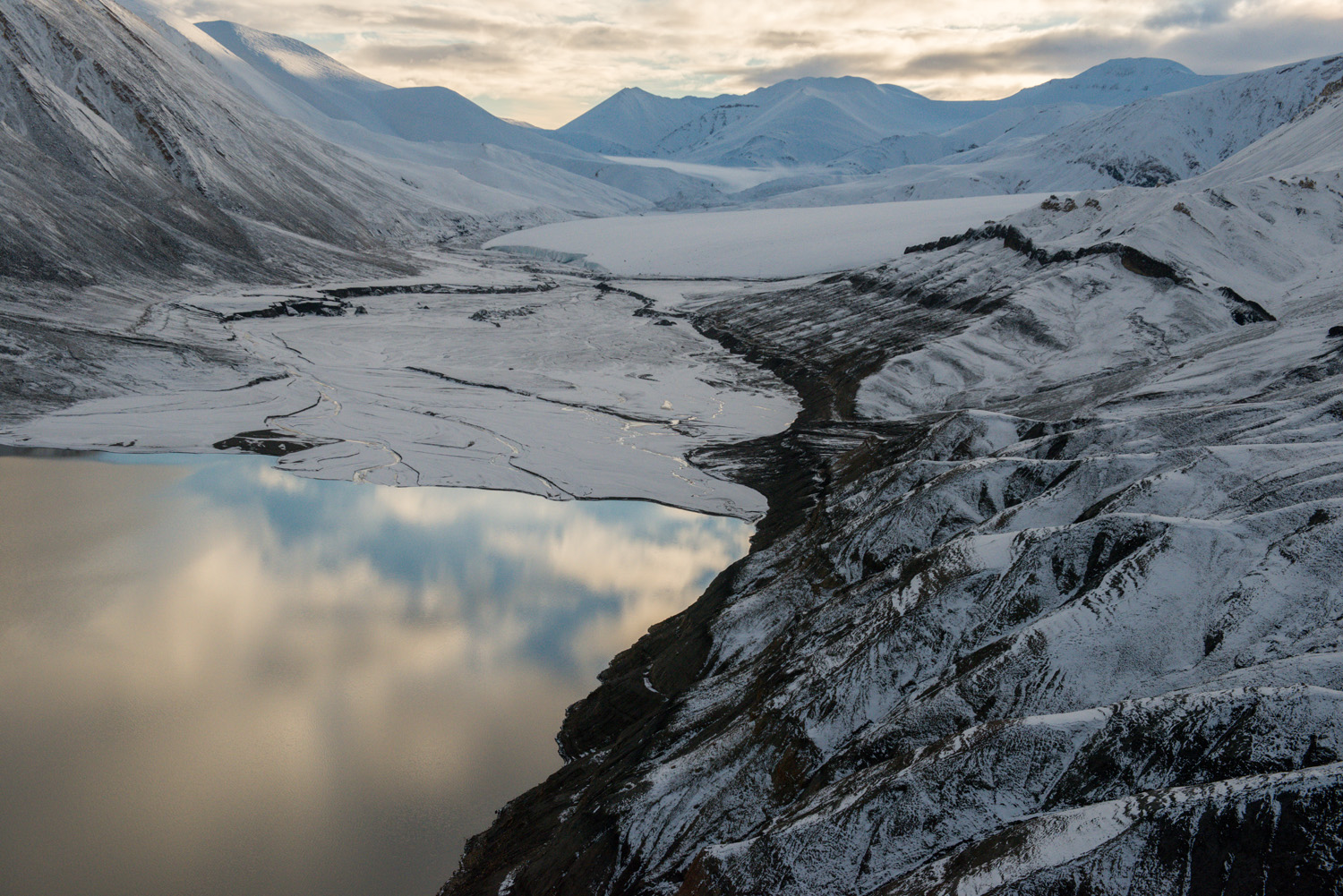 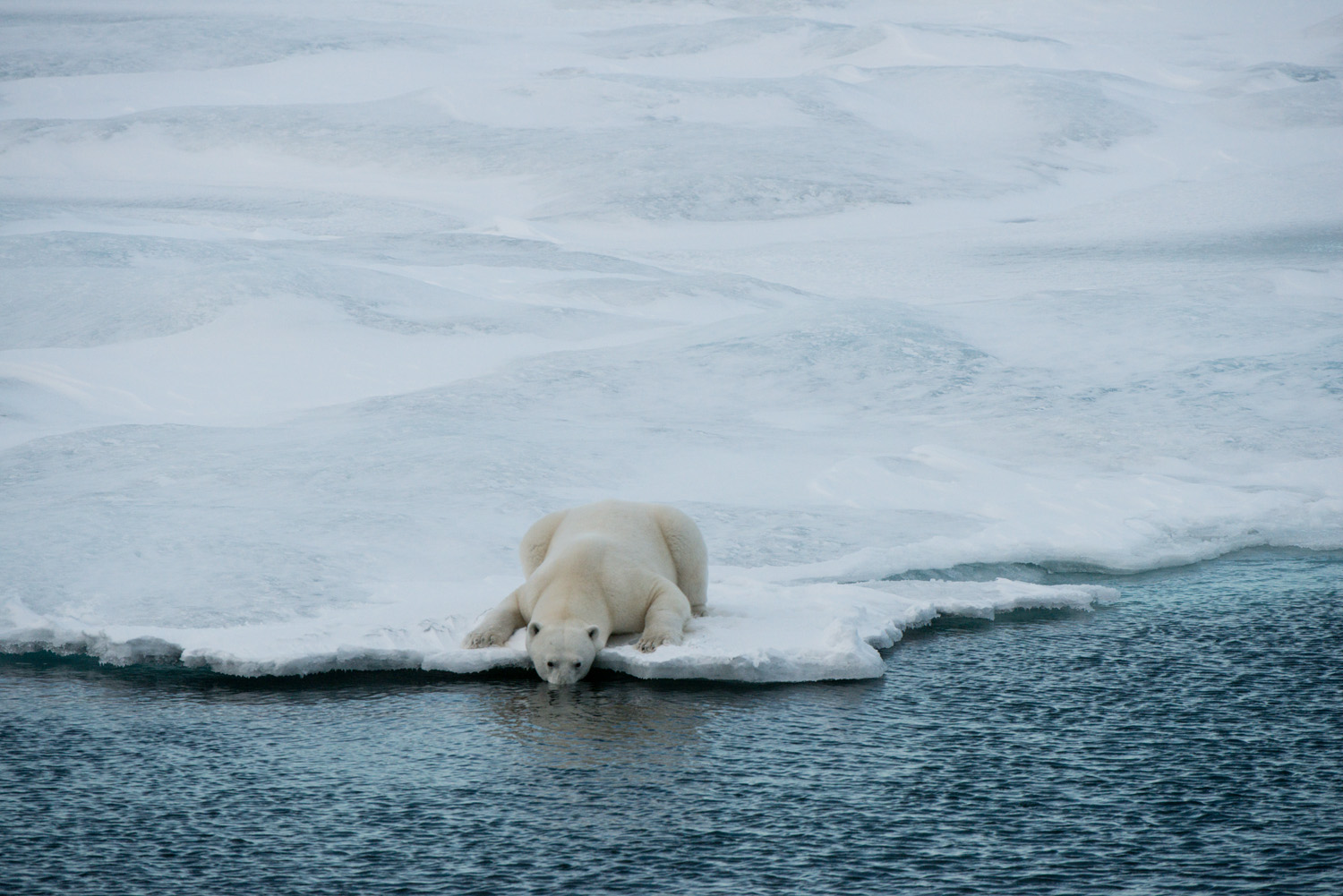 A polar bear near Axel Helberg Island, Canadian High Arctic. There are few bears north of 75° N latitude and they are rarely seen above 83°N. There are four separate geographic populations of polar bears: Chukotka; the Arctic Basin (Franz Josef Land, Svalbard and Novaya Zemlya) and the Davis Strait. Most bears have a home range of 3,000 – 4,000 square kilometres. The total population is estimated at approximately 25,000. The summer ice break-up marks the end of good hunting for polar bears. In a few places they may attack walrus, though adult walrus can largely protect themselves. In late summer, bears scavenge dead whales but when the new ice forms (roughly in mid-October) the bears begin walking on it in search of seals. 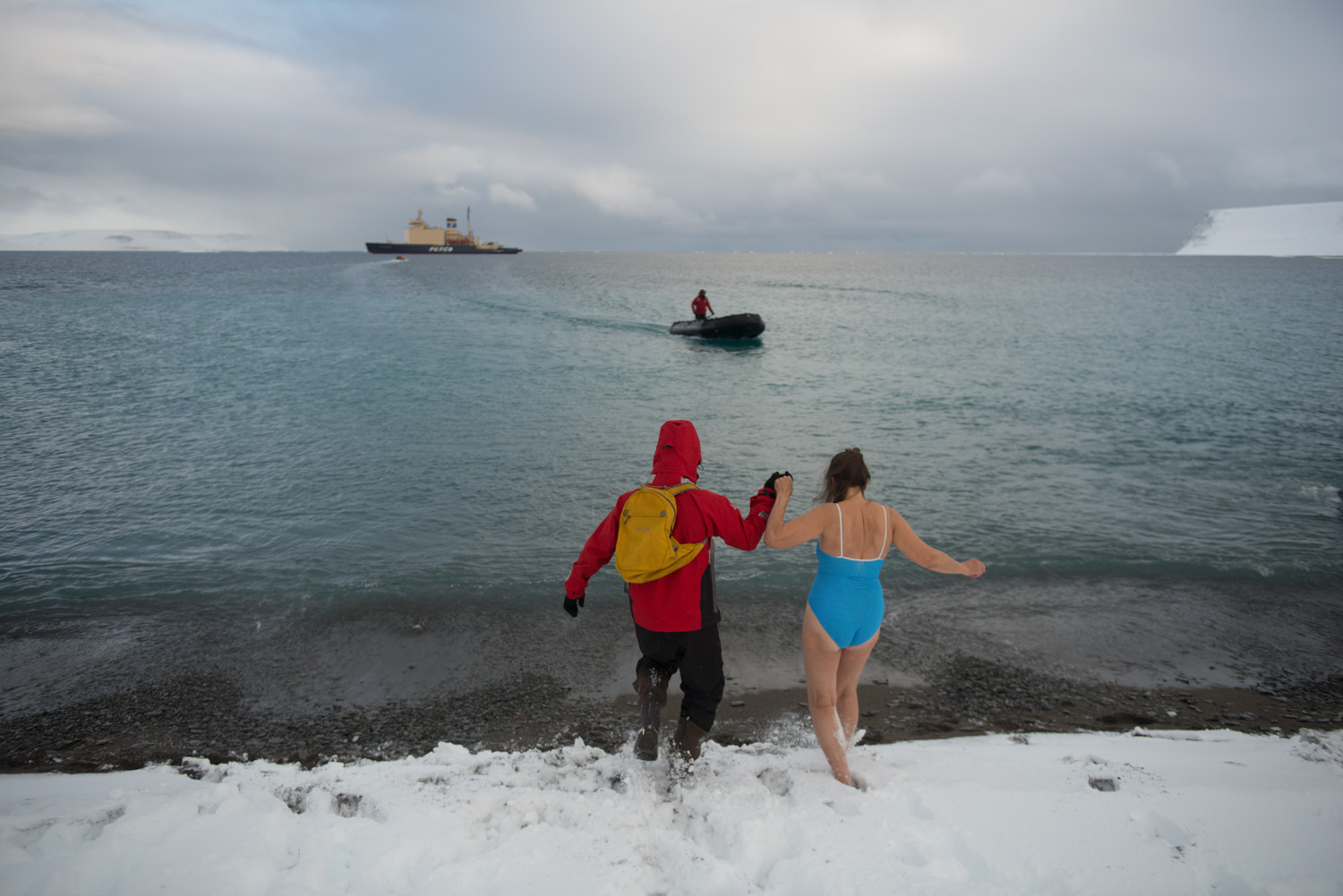