Our home and grateful land

Pilot officer Lawrence “Larry” Love joined the Royal Canadian Air Force on his 18th birthday, midway through the Second World War. Just days after the D-Day landings on June 6, 1944, Love’s Spitfire went missing over the beaches of Normandy. His tombstone lies in the Bretteville-sur-Laize Canadian War Cemetery in Calvados, France, but his memory lives on in Canada. Love Island, a sliver of land in the middle of Lac la Ronge, Sask., was named to honour Love’s sacrifice.

Love Island is one of hundreds of geographical names with ties to conflicts Canada has participated in. To help commemorate these places, the Geographical Names Board of Canada and Natural Resources Canada collaborated to create Commemorating Canada at War, an interactive map journal unveiled Nov. 8.

The map aims to draw a meaningful connection between people and places. “Place names are ubiquitous, they hide in plain sight,” reads the accompanying text. “They surround us, but we rarely take a second look at their meaning or significance. Second, most of the names on this map are war dead from the First and Second World Wars. There is no one alive from the Great War, and those who fought in World War II are in their mid-nineties. We are losing our living links to the past; the task of commemoration and remembrance is being put on the shoulders of the living: us.”

Earlier this year, Canadian Geographic created this map of 488 sites — highlighting the range of geographic forms, the conflicts they honour and a selection of particularly notable memorials — that NRCan and the GNBC had collected up to that point. (See sidebar below to read the numbered callouts.) 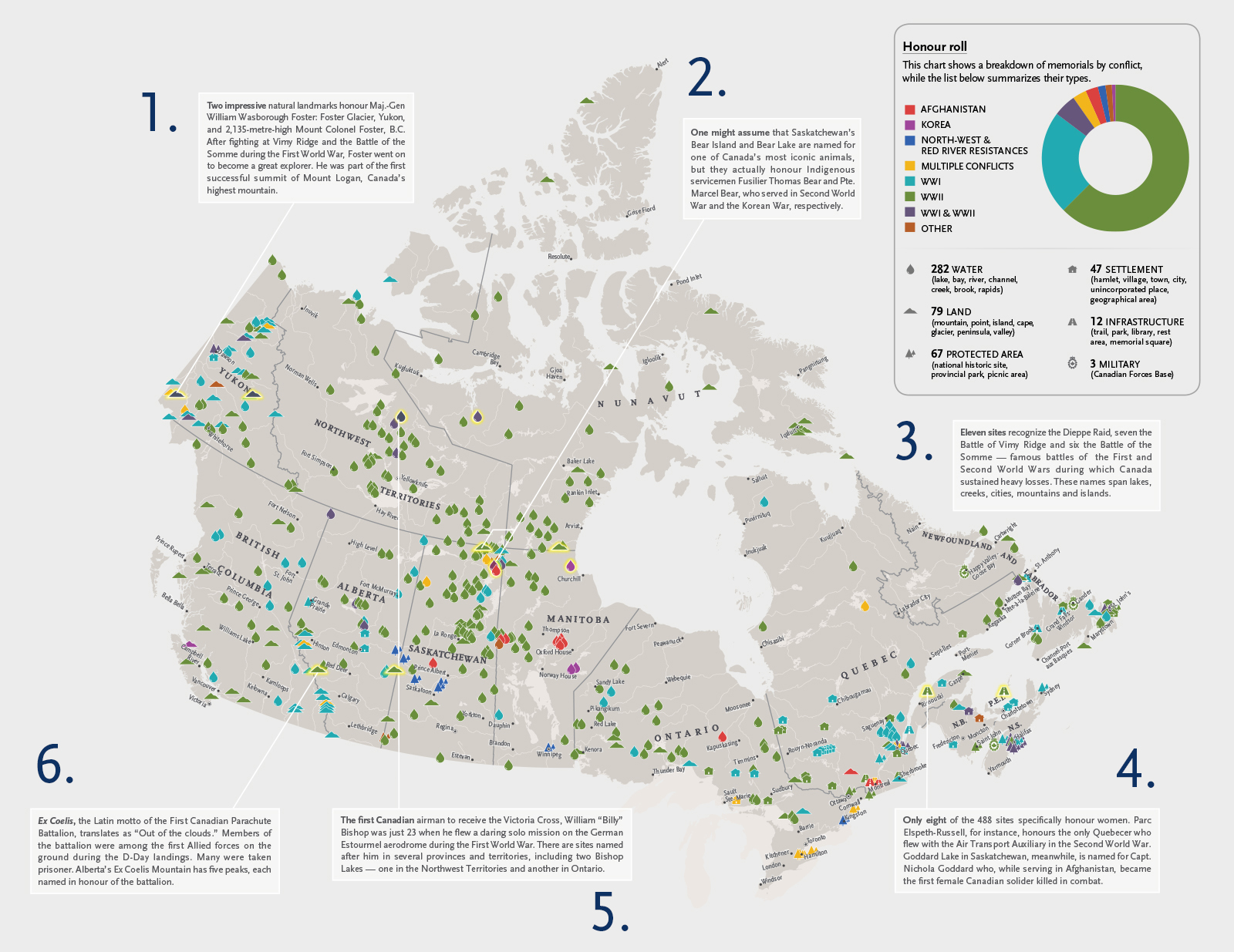 “Canadian culture is intertwined with its expansive geography,” says Connie Wyatt Anderson, GNBC chair. “I see naming places after conflicts and war heroes as an extension of our national relationship with remembrance and our connection to physical place.”

Geographical remembrance means the land itself honours Canada’s fallen — whether it’s Alexander Shoal off British Columbia’s coast or Gravell Point, Nunavut — even when those individuals have faded from living memory. “Canadian acts of remembrance are quiet and serene,” says Wyatt Anderson. “Commemorating Canadian war dead by naming places after them follows a similar tenor. It’s solemn and underfoot, and beckons personal reflection.”

1. Two impressive natural landmarks honour Maj.-Gen William Wasborough Foster: Foster Glacier, Yukon, and 2,135-metre-high Mount Colonel Foster, B.C. After fighting at Vimy Ridge and the Battle of the Somme during the First World War, Foster went on to become a great explorer. He was part of the first successful summit of Mount Logan, Canada’s highest mountain.

2. One might assume that Saskatchewan’s Bear Island and Bear Lake are named for one of Canada’s most iconic animals, but they actually honour Indigenous servicemen Fusilier Thomas Bear and Pte. Marcel Bear, who served in Second World War and the Korean War, respectively.

3. Eleven sites recognize the Dieppe Raid, seven the Battle of Vimy Ridge and six the Battle of the Somme — famous battles of the First and Second World Wars during which Canada sustained heavy losses. These names span lakes, creeks, cities, mountains and islands.

4. Only eight of the 488 sites specifically honour women. Parc Elspeth-Russell, for instance, honours the only Quebecer who flew with the Air Transport Auxiliary in the Second World War. Goddard Lake in Saskatchewan, meanwhile, is named for Capt. Nichola Goddard who, while serving in Afghanistan, became the first female Canadian solider killed in combat.

5. Ex Coelis, the Latin motto of the First Canadian Parachute Battalion, translates as “Out of the clouds.” Members of the battalion were among the first Allied forces on the ground during the D-Day landings. Many were taken prisoner. Alberta’s Ex Coelis Mountain has five peaks, each named in honour of the battalion.

6. The first Canadian airman to receive the Victoria Cross, William “Billy” Bishop was just 23 when he flew a daring solo mission on the German Estourmel aerodrome during the First World War. There are sites named after him in several provinces and territories, including two Bishop Lakes — one in the Northwest Territories and another in Ontario.